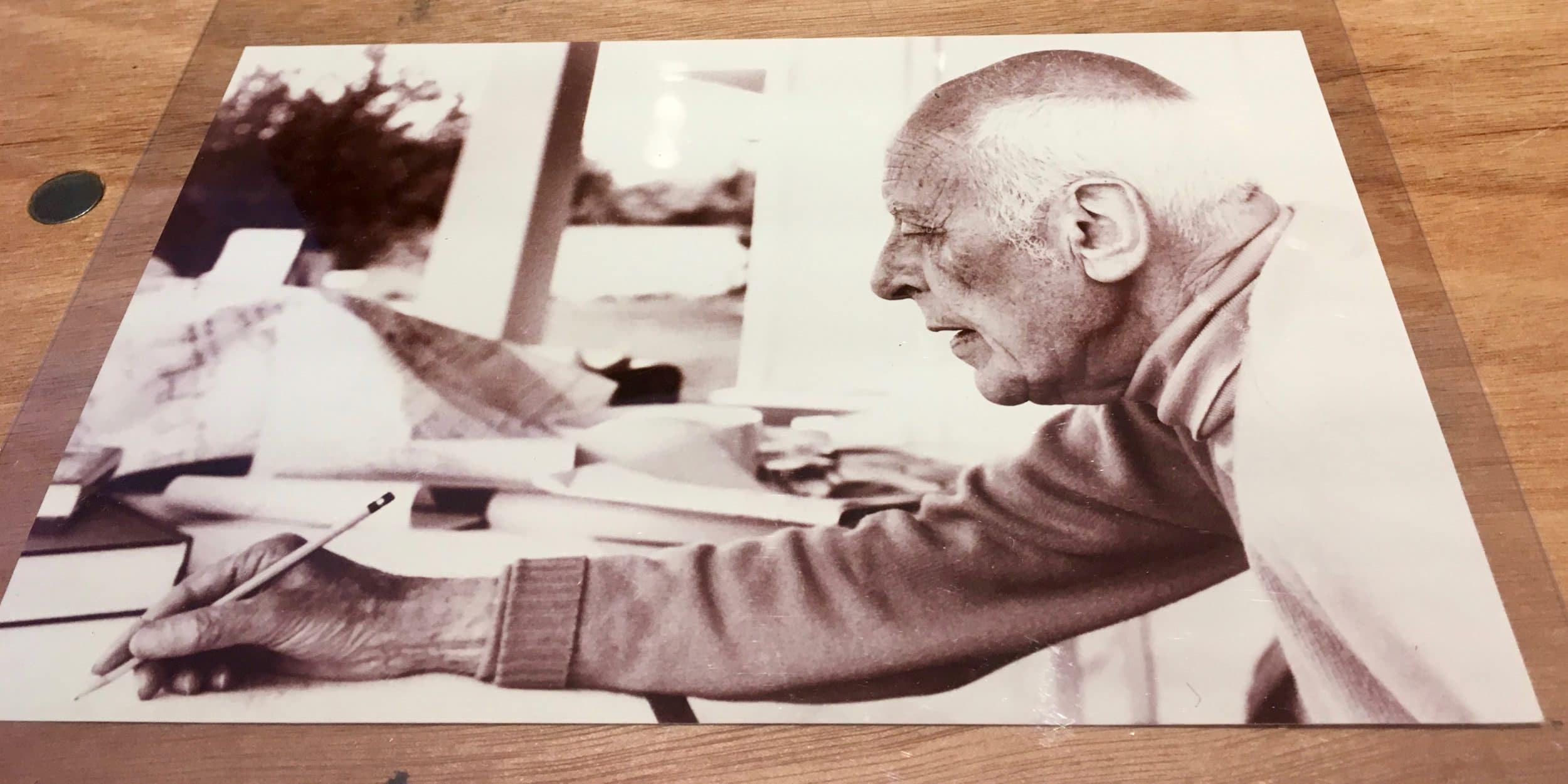 In 2016 a grant from the Geraldine Stutz Trust funded the cataloguing of over 3,000 designs by Russell Page deposited in the Museum’s new archive.  Here Rosie Vizor takes up the story of cataloguing a further 379 drawings – and more personal artefacts…

Since July 2018 I have been the Russell Page Archive Cataloguer, cataloguing a second tranche of material from the De Belder family, close friends of Page’s, and Vanessa Stourton, his niece. On first glance the task seemed overwhelming; 379 rolled plans, 25 folded plans and a box of miscellaneous archive materials such as photographs, notes and correspondence.

The mixed feelings of excitement at what I might find coupled with apprehension over the sheer volume of material will be familiar to fellow archivists at the beginning of a cataloguing project, or indeed, anyone who begins the seemingly endless task of organising their own personal papers!

Admittedly, I didn’t know much about Russell Page when I first started working at the Garden Museum, except the little I’d managed to find out through online research. He was a garden designer, 1906-1985, who’d worked for notable clients all over the world, served during the war, and had a slightly mysterious personality involving Sufism and standoffishness; that was about all the information I had gathered.

It was therefore intriguing to gradually collect more scattered details about this man by cataloguing his life’s work. From the plans alone, I began to appreciate just how hard he worked, right up until his death, following his passion by designing gardens all over the world.

Luckily for me I had inherited a detailed catalogue from Jane Kirby, who impressively finished cataloguing over 2000 of Page’s plans back in 2017. Most plans from the new accession could be slotted into the existing arrangement, adding depth to exciting projects such the Frick Collection and Pepsico headquarters in New York, but there were also many plans for projects the Museum hadn’t yet come across.

My favourite revelation was discovering Page’s plans for The Mall at Central Park. Among these drawings were designs for a pink plastic fountain, inspired by Hieronymus Bosch’s ‘Garden of Earthly Delights’, to be placed at the end of the long, straight, tree-lined avenue. This was very surprising as it did not reflect Page’s usual style at all and presumably it was never realised!

After looking at the 379 plans four times round (initial listing, arrangement, labelling and rehousing) I learned to recognise the nuances of Page’s hand. Although he often helpfully signed, dated and titled most of his plans, some had no obvious indication as to which projects they related. I had to train my eye and memory to recognise similar shapes and patterns that would give clues. Some designs would be nothing more than what looked like abstract squiggles on a page, others with watercolours and coloured pencils demonstrated his artistic training at the Slade, and amongst these were more formal plans drawn up by architects and land surveyors. It was very satisfying to solve the riddles but unfortunately there are still some plans that remain ‘untitled’.

I hope that as more people view the archive, some lucky person will have the same eureka moment with a mystery plan, or may even be the owner of the garden in question! I enjoyed acquiring more botanical and garden-specific vocabulary every day: loggia, pergola, arboretum… and recognising recurring words in the several languages of Page’s annotations – scale, echelle, escala, scala, for example.

It was hard not to get distracted from cataloguing by becoming absorbed in a particularly interesting project. I kept a copy of The Gardens of Russell Page by Marina Schinz and Gabrielle van Zuylen and Page’s own The Education of a Gardener close by to see how the plans were realised through photographs, to gather more information about the story behind a particular project, or to read Page’s thoughts and intentions in his own words. I could also compare the plans with those from the previous acquisition to see how the designs evolved over time.

However, even after carefully studying Page’s plans multiple times and feeling the tactile connection to the past that only an archive can bring (always being careful not to smudge the pencil markings that Page put there himself, or tear the delicate tracing paper that was his preference), I still did not feel that I knew much more about him. This moment finally came when I opened the box containing the fragments of his life that his niece, Vanessa Stourton, had kept. Within this box I found a beautiful bound design diary with ‘Russell Page’ gilt on the spine.

This diary provided a glimpse into Page’s very first professional appointment at the age of 23, filling a gap in the collection caused by the destruction of Page’s prewar files in the London Blitz. His first professional job was to design a rock garden for Guy Fenwick Esq. at North Luffenham Hall, Rutland, England, for which he was paid a wage of ‘one pound a day’. The twelve black and white annotated photographs within the diary chart the gradual growth of vegetation that Page planted surrounding the rock garden with water cascades, over the years 1929-1932.

It was also a relief to finally see photographs of Page himself – well-dressed, studious and often with a pencil in hand.

The fact that we have the very pencils Page used for his drawings makes the collection even more special (am I the only one who loves the smell of a pencil box?). The pencils have an ephemeral quality, collected from his various projects around the world including one from Manero’s Steakhouse in Greenwich, Connecticut, perhaps grabbed from the counter to jot down an idea or make a quick sketch over a lunch-stop.

Now that the catalogue is finally finished, I am eagerly anticipating the Russell Page Archive Council trip to Belgium, when I will be able to put my work cataloguing the plans into perspective by seeing how Page’s beautiful designs were realised as gardens ‘in the flesh’. I hope that I’ll also get to know more about the man behind the designs through stories told by some of the people who knew and loved him.

To visit the Archive of Garden Design, contact the Archivist rosie@gardenmuseum.org.uk