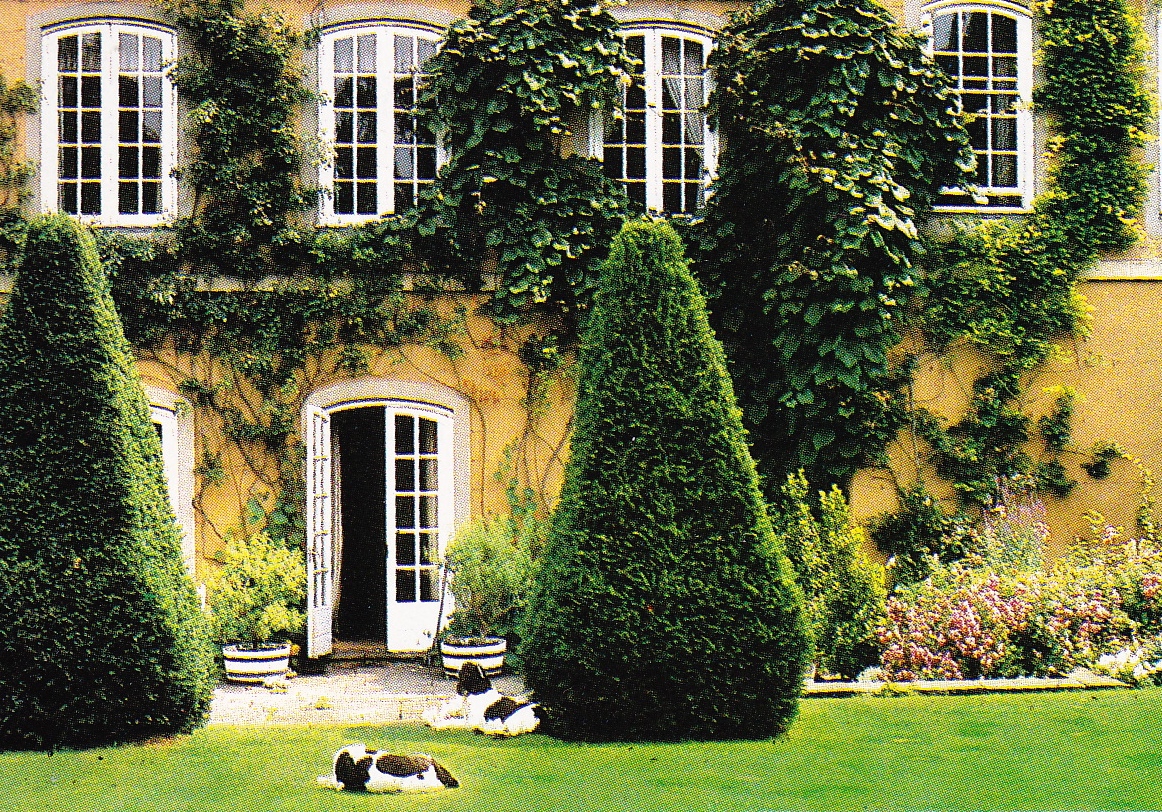 Home » News » Russell Page’s Designs for The Cottage at the Badminton Estate, Gloucestershire

Russell Page’s Designs for The Cottage at the Badminton Estate, Gloucestershire

Art historian and archivist Dr Lucy Inglis is currently researching and digitising designs for some of landscape architect Russell Page’s key garden projects, funded by the Geraldine Stutz Trust. 15 projects are now available to view on our website, but this week we’ve picked out Page’s designs for the Badminton Estate in Gloucestershire, ancestral home of the Dukes of Beaufort, to share with you here. We chose this project in particular because from 21st-24th August, one of our Patrons, Caspar Williams, will be walking 100 miles from the Garden Museum to Russell Page’s grave at Badminton, in order to raise money for the Museum.

Sitting in the Archive Study Room at the Garden Museum in the summer of 2019, looking at a rapidly drawn sketch, labelled ‘Masterplan for the cottage garden’, I felt somewhat baffled. Despite having this so-called masterplan in front of me, I was still struggling to get a sense of what the gardens at the Cottage at Badminton might have looked like. There are around twenty-five drawings relating to Badminton in the Page archive collection. Yet the scale of the plans meant that usually I could only look at them individually. Faced with these often detailed, but ultimately disjointed, designs it was almost impossible to imagine the garden as a whole. The constituent parts were all there – drawings of a stone archway, an obelisk and a dovecote, plans for a kitchen garden, a walled flower garden and a herb garden – yet I struggled to understand how these pieces fitted together or how I would have experienced them as a visitor.

The plans did provide me with something solid: dates. Lady Caroline Somerset and her husband David had first asked Russell Page to help with the gardens at the Cottage on the Badminton Estate in the mid-1960s. He would return, on and off, to advise on various projects up until his death in 1985. The Somersets had lived with the Duke and Duchess of Beaufort at Badminton since their marriage in 1950 (although only a distant cousin, David was in line to succeed to the title).

The wedding of the young, glamorous couple, at St Peter’s, Eaton Square, was a highlight of the social season: guests included King George VI, Queen Elizabeth (David’s godmother) and Princess Margaret. For a glimpse at the wedding, see this Pathe news clip.

The chief occupation at Badminton was hunting. When not enjoying country pursuits, David was busy in his role as chairman of Marlborough Fine Art. His circle of friends included international jet setters such as Fiat heir Gianni Agnelli and shipping magnate Aristotle Onassis. During the first fifteen years of their marriage, perhaps not surprisingly, gardening featured very little. Then, around the time of the arrival of their fourth child in 1964, the couple moved to the Cottage on the estate (also called the Dower House) and Caroline found herself with her own garden.

‘A sea of bindweed and ground elder’

In her contribution to Alvilde Lees-Milne and Rosemary Verey’s anthology The Englishwoman’s Garden (Chatto & Windus, 1980), Caroline Somerset described the state of the garden when they arrived: ‘my garden had been totally let go and was a sea of bindweed and ground elder’ (125). Nevertheless, it had good ‘bones’ in the form of ‘a huge yew hedge, at least one hundred and fifty years old, walls, an orchard and a couple of good sized trees’ (125). She knew from the outset that she wanted the garden to be arranged as a series of interconnected rooms. Although the Cottage was much smaller and less grand than Badminton House, Caroline ensured that it was elegantly decorated, working in collaboration with Colefax and Fowler. The garden, it seems, was to echo the interiors: classic design on an intimate scale.

Even though Caroline Somerset’s description of the evolution of the garden was written from her own personal perspective – and within the context of a book on women gardeners – it provides a lovely insight into the garden at the Cottage. Having never visited Badminton, reading Caroline’s words brought Page’s designs to life for me.

By her own admission, Caroline knew next-to-nothing about garden design. She had enthusiasm and energy, however, and tackled the project head on. Armed with an encyclopaedia on gardening and a washing line with which to mark out lawns and beds, she set to work. With the aid of a Mr Bryan (who, although green-fingered, was experienced only at gardening on his own allotment) plants were ordered and laid out in a somewhat haphazard fashion. If she later discovered that they were positioned incorrectly, she had no qualms about moving things around.

It was not long, however, before Page was called upon to offer his guidance. Already a family friend (Caroline was the daughter of the 6th Marquess of Bath, with whom Page had worked at Longleat, while David’s friend Gianni Agnelli had been one of Page’s clients since the 1950s), he was a natural choice. The working relationship appears to have been a good one. ‘Russell Page has been most patient with me’, wrote Lady Caroline in her 1980 essay. She goes on to elaborate:

I am frequently pig-headed and am apt to insist on doing what I want. It usually does not take me more than a year to find out that what I have done is wrong and that what he advised was right. He is then very tactful. He never says, ‘I told you so,’ but merely, ‘I’m glad to see you have changed that.’ (130)

The kitchen garden: ‘surely the prettiest in the realm’

The first room on which Page worked was the kitchen garden, described by Fred Whitsey in an article for The Garden as ‘surely the prettiest in the realm’ (vol. 102, December 1977, 484).

Stone paths ran between and around four flowerbeds. Each of these was to be edged with low box hedging. ‘Everyone said that we were mad to plant box,’ Caroline recalled, ‘that it would be a lot of work. It is’ (129). It was typical of Page, however, to include this formal touch in the design. (His gold-medal-winning design for a potager at the RHS Chelsea Flower Show in 1958 is a beautiful example of box hedging in a kitchen garden.) He also incorporated his much-loved ‘Iceberg’ roses.

There is also a detailed drawing of the arbour which Page designed for the centre of this space. This wooden structure was swiftly covered by Caroline in roses, clematis, solanums and jasmines; so full did the folly become that in the summer it resembled one of ‘Queen Mary’s prettiest toques’ (127).

A herb garden and new walled flower garden are among the designs which followed. (Plans of these can be seen on the Badminton project page.)

In 1984 David Somerset became the Duke of Beaufort, and Lady Caroline set about remodelling the gardens of the main house. Page’s preliminary designs for the South and East Front gardens are among the last he ever created; he died on 4 January 1985. The work was continued by Belgian landscape architect François Goffinet, with whom Page had worked closely on other projects (Goffinet also continued Page’s work at PepsiCo’s headquarters in America).

Badminton was one of Page’s favourite gardens, and it ended up being his final resting place; he chose to be buried at the church of Little Badminton. Being Page, he chose to be buried outside the churchyard wall in a simple unmarked grave, perhaps because although he had been educated in a traditional Anglican belief he became in adult life firstly a disciple of Gurdjieff and later, a Sufi. To his friends it seemed symbolic of a man who was both at the epicentre of the elite, but also chose to live apart, and alone.