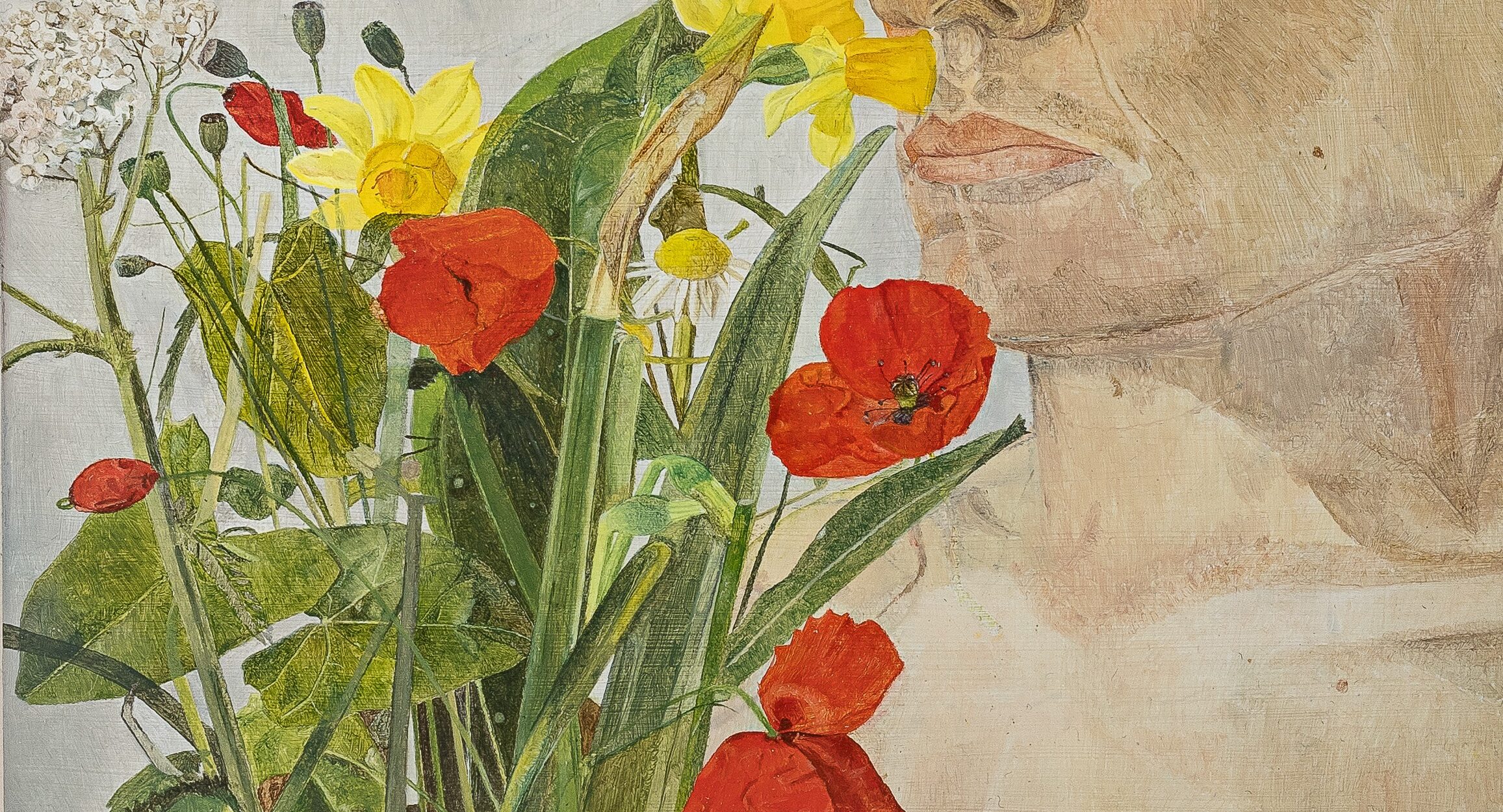 Taking place at PATERSON ZEVI gallery in Mayfair, New Nature is a group exhibition organised with IKEBANA PROJECTS, bringing together eleven artists from Japan and worldwide. The exhibition is inspired by Ikebana 生け花, the Japanese art of flower arrangement. Dating back to the 8th Century, this Ancient art form – also known as kado (way of flowers) – has now evolved into an avant-garde movement emphasizing the necessity to create new forms using materials from nature. Exhibition curator Julia Tarasyuk interviewed one of the exhibiting artists, Esme Hodsoll, in an exclusive for the Garden Museum newsletter:

Botanical elements are often present in your paintings. Do plants and flowers play an important part in your practice?

I tend not to differentiate between my practice/painting, and my life. Plants play an extremely important role in my life, without them, I wouldn’t be living. I find myself drawn to them and the way in which I’m attracted to, or affected by their presence changes constantly which keeps me returning. The element of mystery and surprise is compelling.

The painting you created for the exhibition is a beautiful example of intimacy between the person (yourself) and a plant (orchid). What is the symbolism behind this work and why have you chosen orchids?

It was more a coincidence, I had just started it when the idea of the show was presented. There is no symbolism behind the painting, I chose the orchid because I was drawn to the way the flowers cascade downwards, almost leaving a residue in their path. Orchids want to climb upwards but as the flowers have a certain density they are pulled down by their own weight. Something about the way they fall yet cling on moved me. Perhaps this is felt in the painting.

Japanese culture and in particular cinematography has influenced on your practice. What attracts you in this aesthetics?

Japanese prints and paintings share certain characteristics which I’ve also noticed in some Japanese films, most memorably Mizuguchi’s ghost story Ugetsu. It’s to do with the placing of the elements/objects and the space in between. The imagery is generally very graphic which gives them an immediacy, yet the compositions are so subtle and unusual that they disturb, and live on within us. I was thinking about these mysterious compositions and the spaces in-between from the film (Ugetsu) around the time I started Orchids/Torso.

How have the ideas of Ikebana inspired you and shaped the ‘Orchid/Torso’ printing?

I was not familiar with ikebana as a concept until this show, but I learnt that at the root, is the Buddhist desire to preserve life, which in turn has created many of the rules for the arrangements of flowers. The desire to preserve life is one of the principal forces which drives me to paint. After reading about ikebana i have tried to consider what affect this core desire could have on the way I got about it. Ikebana, being also functional/decorative, is preoccupied with the actual preservation of the life of the flowers. In order for the display to last, techniques have been devised and vases created especially. Being a slow painter I too am invested in creating the ideal environment for my subjects to last in. I often find myself in conflict with the life/patience of my subjects, and my desire to capture/depict everything I can of it. Perhaps whilst painting Orchids/Torso the zen Buddhist thinking behind ikebana had an effect on me. When making this picture, after I had painted each flower, it would fall off and I would move onto the next one whereby (once I had finished) it too would fall off until there were no more flowers and the painting was finished. I’d be interested to continue with this Zen approach towards painting, being at one with the subject etc. although, for portraits, I’m not so sure how it would work…

Do you have any favourite pieces in the collection of the Garden Museum?

The collection has a very interesting, diverse selection of pictures and objects. The painting, ‘Cabbage’ by Cedric Morris is very good. I can feel the plant growing, a growth not usually visible to the human eye, but something painting can capture through sustained observation. It’s a bit ikebana, in the way it has preserved the life of this cabbage, which otherwise would have probably been forgotten long ago. 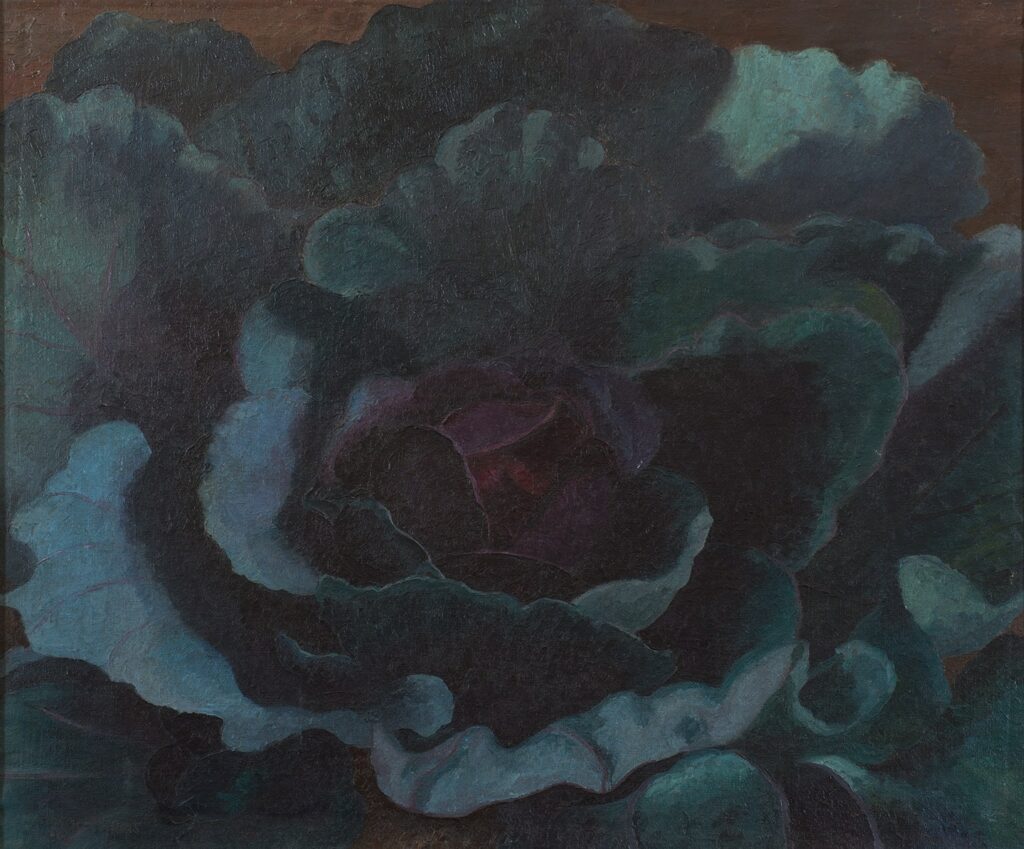 I also like the early sprinklers, especially the cast iron and brass one (1920 – 1940). You can feel the weight of it and imagine the force with which it would pump and spray the water, cooling and providing relief to the surrounding plants and land.

Lastly the gnomes, particularly Britain’s Reclining Gnome. It is made out of lead and only 52 mm long. His confident, nonchalant pose reflecting the rather grand title he has been given, in contrast with his detached yet quite vulnerable face is quite touching. It would be something to stumble across him in a garden.

Esme Hodsoll (b. 1992, London) first studied at Pennighen, École de Direction Artistique et Architecture Intérieure, in Paris before attending the Royal Drawing School, London. Hodsoll was awarded the Richard Ford Award, and in 2017 she participated in residencies at both Dumfries House, Scotland and The Prado, Madrid. Hodsoll’s scenes breathe with life, which is reflected not only in her choice of subjects but also through her skillful hand. Her years of artistic travel leading to Scotland, Greece and Spain aided Hodsoll in her close study of light, which lends itself to embedding life and action into the artist’s renderings of landscapes, portraits, and scenes of quotidian domesticity. One of Hodsoll’s works is included in Ways of Drawing: Artists’ Perspectives and Practices published by Thames and Hudson in October 2019. In 2020, she completed a residency at ALMA ZEVI Venice and her solo exhibition Esme Hodsoll: Air du Temps ran from September to December 2021. A new work is included in the exhibition NEW NATURE at PATERSON ZEVI, opening June 2022.  Hodsoll lives and works in Paris.

Julia Tarasyuk is an art historian and curator specializing in Japanese contemporary art. Through her projects and publications she promotes an exchange between Japanese and international creative communities providing an insight into the local art scene. She is a co-founder of IKEBANA projects and her book on contemporary art in Japan is due to be published by Skira Editore in 2023. IKEBANA projects emphasize a modern vision of Ikebana 生け花 (Japanese art of flower arrangement) through a series of art collaborations, events, and other forms of artistic expression. Working closely with Japanese Ikebana artists and craftsmen, IKEBANA projects aim to highlight this traditional art and explore its infinite contemporary expressions.