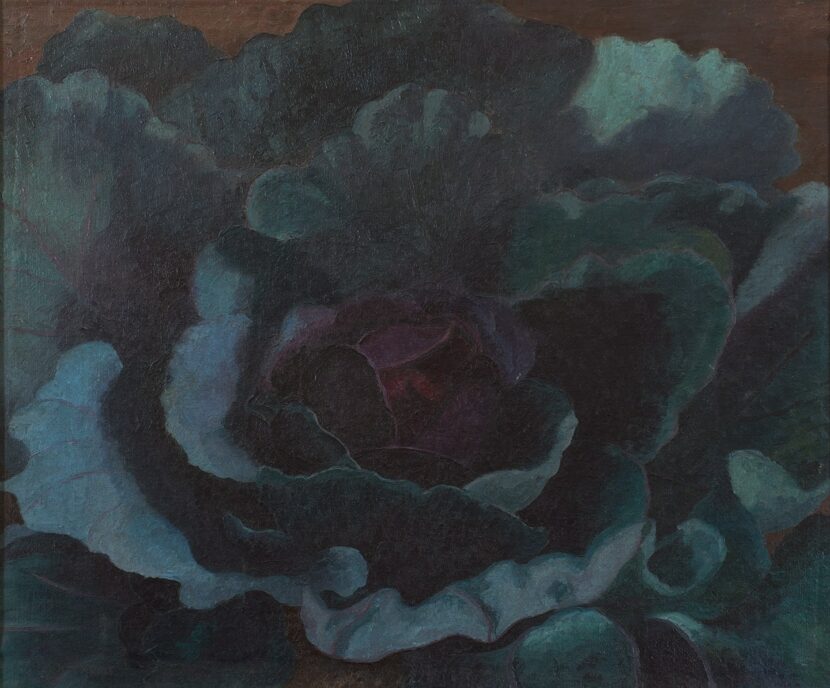 This study of a cabbage, by the artist Sir Cedric Morris (1889-1982), was donated to the Museum through the Cultural Gifts Scheme – a government initiative which incentivises collectors to give works to chosen Museums during their lifetimes. The expert panel assessing the painting consulted artist Maggi Hambling, one of the best-known pupils of Sir Cedric Morris, and Morris’ partner Arthur Lett Haines at the East Anglian School of Painting and Drawing which they set up in the 1930s.

This picture was painted in 1956 at Benton End, where Morris and Haines lived and gardened from 1940 until the former’s death in 1984. The painting was unknown to Morris experts, and was shown to Maggi at Morley College, where she teaches. She immediately confirmed the painting as his work and later wrote a more personal response:

When I look at this painting, I enter the unknown territory of an extraordinary cabbage. There is no escape, but I don’t want to escape, quite the reverse. I begin an almost treacherous journey – valley deep, mountain high – through the cabbage’s endless topography which not only fills the space of the canvas but extends beyond it.
As I walk, I feel like an insect in a huge jungle, the texture of leaves beneath my feet.
Cedric has created a sturdy cabbage which nevertheless is unfolding before our eyes. Our eyes climb over and under surrounding terrain on sensual paths enticed into the almost central secret crimson depths. Fruit and vegetables have long stood as metaphors for sexuality in art but Cedric’s totally original, up-front statement is unique. The physicality of the paint and the power of its mysterious range of colour, let alone the imposing scale of this brassica, make it possible. This is no ordinary cabbage, dead and trimmed for the pot, it is alive and growing. It seduces us.

Accepted under the Cultural Gifts Scheme by HM Government from Peter Nahum and allocated to the Garden Museum, 2015.