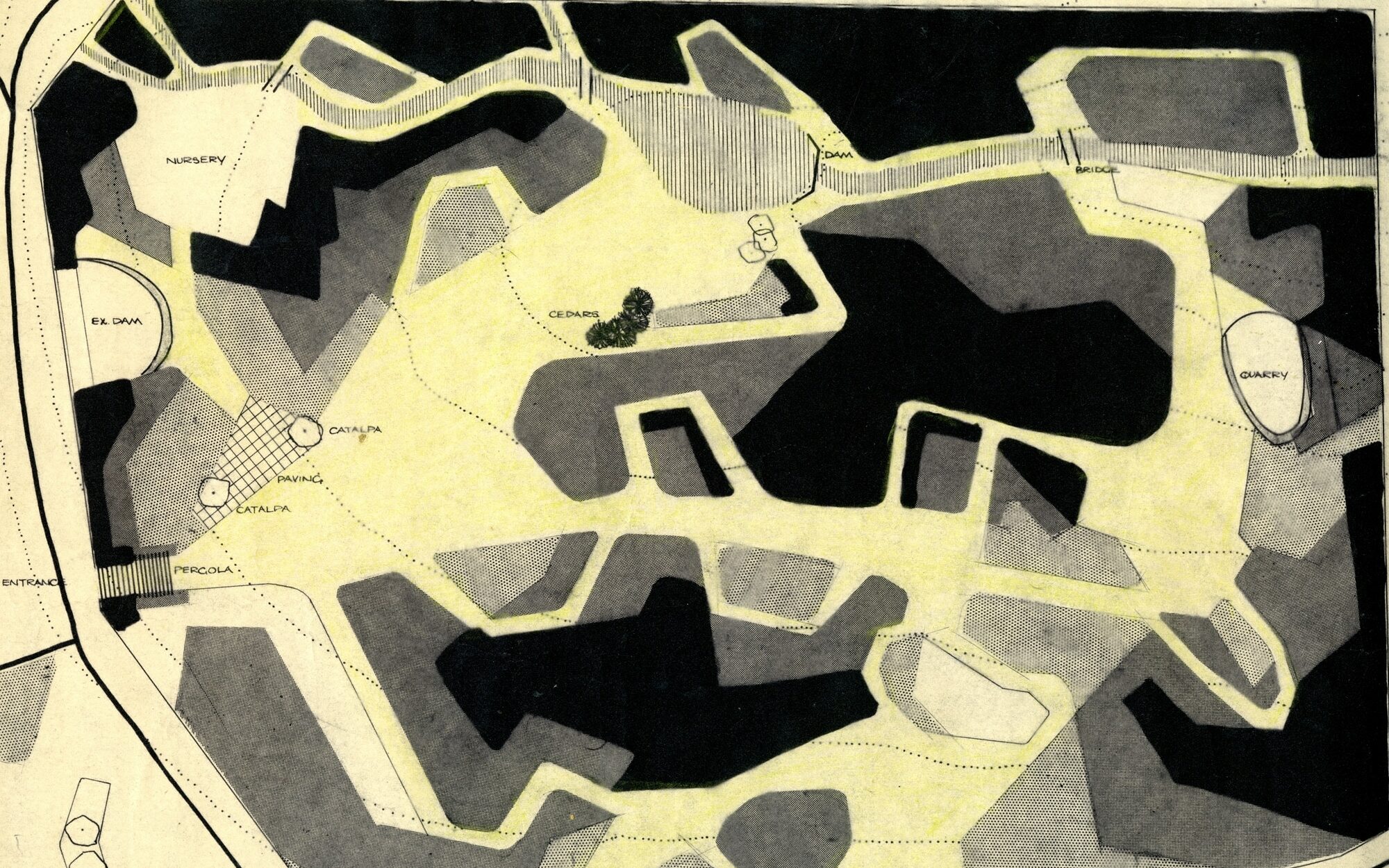 John Brookes died on Friday 16th March aged 84, in the company of friends and pupils. We are very pleased that he was able to see our retrospective of his work as a designer, and only last month come on stage to share his thoughts on gardens with an audience of those inspired by his teaching and writing.

John Brookes: The Man who made the Modern Garden continues at the Garden Museum until Sunday 25th March.

In 2011 we commissioned director Phil Cox to make this film portrait of the great designer at his home, Denmans. Denmans will re-open in June following renovations.

A tribute by Gwendolyn van Paasschen, pupil of John Brookes then friend and colleague in design.

The End of and Era

‘I am not a gardener. I am a landscape designer.’ So John Brookes MBE would admonish anyone who mistook him for the former.

Regarded as the ‘the man who made the modern garden’, Mr Brookes died Friday morning at the age of 84, after a lifetime of designing gardens and landscapes in Britain and around the world. Some of his best-known gardens include the College Green Garden at Westminster Abbey, Fitzroy Square, Barakura English Garden in Japan, and the English Walled Garden at the Chicago Botanic Garden.

Born in Durham in 1933 Mr Brookes began practising garden design in the late 1950s, having worked with Dame Sylvia Crowe and Brenda Colvin in London. Recognizing the rapidly changing lifestyles of what was then ‘modern life’, he vigorously broke with previous garden design traditions and the emphasis on showcasing plants by advocating the use of gardens as extensions of the home. Also ahead of his time, he introduced the notion that a garden could be low-maintenance as well as beautiful.

His approach was first publicly unveiled in 1962. That year, Mr Brookes, who was the first independent designer to present a Chelsea Flower Show exhibition garden, audaciously created a designed exterior space at Chelsea that had seating, sculpture, even a place for an incinerator, and was linked to an imaginary townhouse interior. His approach was unprecedented, presenting the then-novel idea that people of all income levels could have designed, fashionable, peaceful gardens tailored to their preferences. Plants were part of the design but subordinate to the garden’s purpose, which was to create a ‘Room Outside’, the title of his groundbreaking book published in 1969 and revised in 2007. It was the first of more than 25 books and pamphlets that he wrote about garden and landscape design.

Mr Brookes went on to teach and lecture around the world, influencing thousands of homeowners, garden designers, and contractors over his career of 50+ years. In 1980, after a two-year stint teaching interior design for the Inchbald School, he founded the Clock House School of Garden Design at Denmans, West Sussex, where he lived until his death. He also set up schools of design in Chile, Japan, and Argentina.

He was proud of his students and would go out of his way to help those who wanted to further their careers.  He would put in a good word, encourage his mentees to write and promote themselves, and otherwise do what he could to help them excel.

His energetic writing, teaching, and appearances on television meant that he became widely regarded as the ‘king’ and the ‘godfather’ of garden and landscape design. He is perhaps best known for teaching his ‘grid’ method of design, which enables a designer to determine proper proportions for spaces and mass in a garden. He also believed that while garden design was an art form, gardens should serve the needs of those who use them. As he began to travel and design abroad, he became convinced that gardens, public or private, should be connected to the culture, history, and landscapes in which they are built.

His influence and legacy in design is far-reaching and will be long-lived.

Mr Brookes served as the chairman of the Society of Garden Designers from 1996 to 1999, and has received myriad awards and prizes, including the Award of Distinction of the American Association of Professional Landscape Designers, the Garden Writers’ Association of America Award of Excellence, and countless other international awards, including four Chelsea Flower Show Gold Medals. In 2004 he was awarded an MBE for garden design and services to horticulture. He also served as the chairman of the Aldingbourne Trust and in his latter years as a Samaritan.

While his forthcoming memoir, A Landscape Legacy (Pimpernel Press), tells the story of his remarkable life in his own words, Mr. Brookes will be remembered by his friends for his sharp wit and straight talk; his love of pugs, Chopin nocturnes, blended whisky, yellow mimosas and ’Annabelle’ hydrangeas, and walking on the South Downs; warm summer evenings at his garden, Denmans, in West Sussex; pub dinners, latterly at the Spur in Slindon; and his constant encouragement, not always gentle, to lovers of design. He loved to entertain and could make a mean cottage pie at the drop of a hat for unexpected guests.

Never a name dropper, Mr Brookes revelled in pleasing his clients – the true test of success, he believed, of a garden’s design. His keen eye, impatience in getting a project finished, and generosity of spirit will be missed by many friends, admirers, students, and colleagues around the world – from Britain to Russia to Argentina and the US.