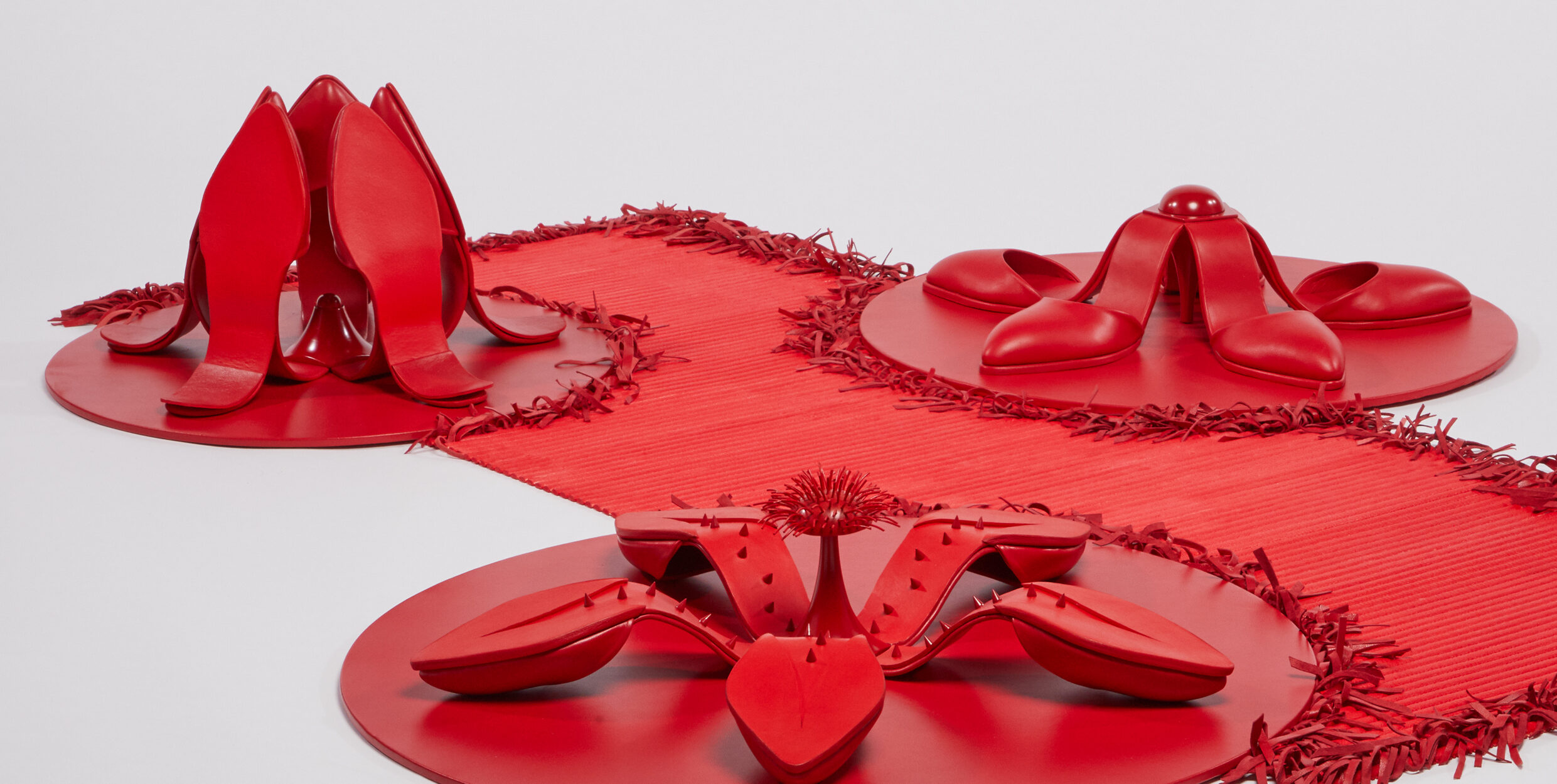 For London Craft Week, fashion artist and conceptual shoemaker Jo Cope has collaborated with floral designer Shane Connolly, performance artist Hollie Miller and curator Amy de la Haye on an installation and performance centred around a hand-crafted leather ‘Feminist Rose’. We spoke to Jo to find out more about her work and what to expect from the performances on Monday 9 May at the Garden Museum:

Can you tell us about your career so far, when did you start combining art and fashion? Why are you particularly drawn to conceptual shoemaking?

I am a second career artist, from a young age I had a deep connection with both fashion and art. I was brought up in Leicestershire but started visiting London aged 15 to buy and look at vintage garments in places like Portobello Road and Camden Market, High Street Kensington and King’s Road in the late 80’s early 90’s.

In 2003 I did an art foundation and then a degree in fashion design after having to change careers due to an injury. I got involved with a design and performance lab out of hours where I was able to explore garments in a far more free and creative space. Although my work starts with a fashion template, I have never been interested in the commercial fashion world, my crossover into art gives me the freedom I need.

When I started a masters at the London College of Fashion in 2016 I became obsessed with working around the feet. I think the foot offers so much potential for creativity as a place that is often overlooked, with so much symbolism and metaphor attached to it. I grew a deep respect for shoemaking as a craft after working alongside technicians with over 20 years experience. They say ‘once a shoemaker always a shoemaker’, the reason being that it takes a lifetime to hone all of the skills. My grandma was also a heel coverer all of her life which was fundamental to allowing her to put food on the table, my grandpa was a cobbler and replaced the soles of children’s shoes who couldn’t afford new ones. So I guess somewhere it is in my blood.

What’s your process when creating a new piece?

The starting points is often books, reading about history across a vast range of subjects. I am dyslexic so I avoided books most of my life, but over more recent years I have found away of processing information often through quotes or snippets and manifesting them into a visual language through craft.

The other aspect is that all of my work relates to life experiences, so I draw parallels between what I am reading at that time to what my reality and struggles are, and these things start to merge into ideas.

What has been one of your favourite or most challenging pieces to make?

Time pressured work is the hardest, craft is a slow process and my practice often has many unknown stages to uncover as I go. Craft finishes can be compromised or destroyed if rushed in the wrong way.

I was asked to make a new piece of work for the Sadler’s Wells x LCF collaboration for the Material Movement gala in 2017. This was an installation and live performance in collaboration with a choreographer. One of the pieces was called ‘metaphor for ambition’ a rocket shaped double sided shoe that the performers could enter with their feet on stage. It was large and complicated to construct and I had 3 months in total to create everything and rehearse. I had to work until midnight in the studio nearly everyday including weekends, but it was worth it in the end!

Can you tell us about the pieces you created for our Fashioning the Rose exhibition, and for London Craft Week?

This is a triptych installation in which sculptures are hybrids of roses and stiletto shoes.

The forms are based on roses in different stages of their life cycle and the stilettos also play with narratives around females at different stages in their lives from the blushing naive bud to the post bloom sordid tuft as a more feminist statement.

The sculptures were crafted over the period of a year and are constructed from 15 individual petal-like shoe forms. Each shoe was handcrafted on a bespoke made ‘bud-like’ wooden last and created in vegetable tan leather and lamb nappa. The process of making started at the beginning of the first lockdown, relating in part to our reconnection with nature.

I became fascinated  in the parallels that can be drawn between females and roses, I was also reading about the history of female suppression within the arts while also experiencing the peri-menopause – the end of my own bloom. The final rose/shoe hybrid became a feminist rose using upturned protesting female shoes with thorn-like studs on the base, subverting the ideals of the female as something submissive and of purely aesthetic value, instead standing for freedom, autonomy and empowerment at all stages of a woman’s lives.

What was the process of collaboration with Hollie Miller, Shane Connolly and Amy de la Haye?

The collaboration started with me reading the book Ravishing: The Rose in Fashion by Amy de la Haye and getting in touch with her to express to her the impact this book had on the evolution of my latest work. I spoke with her about my initial idea about creating a performance in a shop which sold roses in central London. Amy started to tell me about how unsustainable aspects of the commercial rose industry was and she suggested that we started a conversation with her good friend Shane Connolly, a sustainable flower advocate and florist.

We started a dialogue in person at the Garden Museum about the crossovers of our interests in roses and the relationship grew from there. We were keen to address issues around ethics and use the collaboration as a platform to politicise the rose. Hollie Miller is a performance artist whose work I had admired for a while, I thought it was important to bring in a live performance aspect to create an event that could draw out more of the deeper narratives to connect with the audience on an emotional level.

What can people expect from the performance?

Hollie is an experimental performer, her work is very powerful in its abstraction of the body and conceptualisation of narratives. I have made a series of props for the performance which take the audience on a journey through aspects of the rose and female’s life. The performance is intended to be provocative in its feminist portrayal of the rose, while Amy and Shane will use text to empower the audience with literary excerpts throughout, bringing the more politicised points to life.

You were inspired by the rose for this project, are you a gardener yourself at all?

I have an appreciation of roses, the females in my family have always grown and been proud of the different rose varieties in their gardens. One of my grandmas was so obsessed with her roses that she would go out on her push bike collecting horse manure in her basket to feed them. I have a very nice low maintenance garden which is majority evergreen. In my artworks I use the single colour of red in my garden it’s the single colour of green. I also have a lot of house plants, one of which is from this same grandma and which I’ve managed to keep alive 10 years after her passing.

For this project I went to reclamation yards looking for potential vintage plant stands for the artworks. I found an amazing stone plinth, a sculpture of the ‘three graces’ which will form the centre piece.

Are you working on any other exciting projects you’d like to mention?

I am currently collaborating for the second time with the homeless charity Shelter, bringing together designers and artists to use their craft to tell the stories of previously homeless individuals particularly focused on their positive steps forward. I am also working on a solo exhibition which will open in Leicester in Nov 2022 and another solo show for 2023 also in the East Midlands at the National Centre for Craft.

Performances will take place at 11am, 12pm, 2pm and 3pm on Monday 9 May, included in Garden Museum admission – book a visit

The installation will be on show for the duration of London Craft Week, 9 – 15 May – find out more