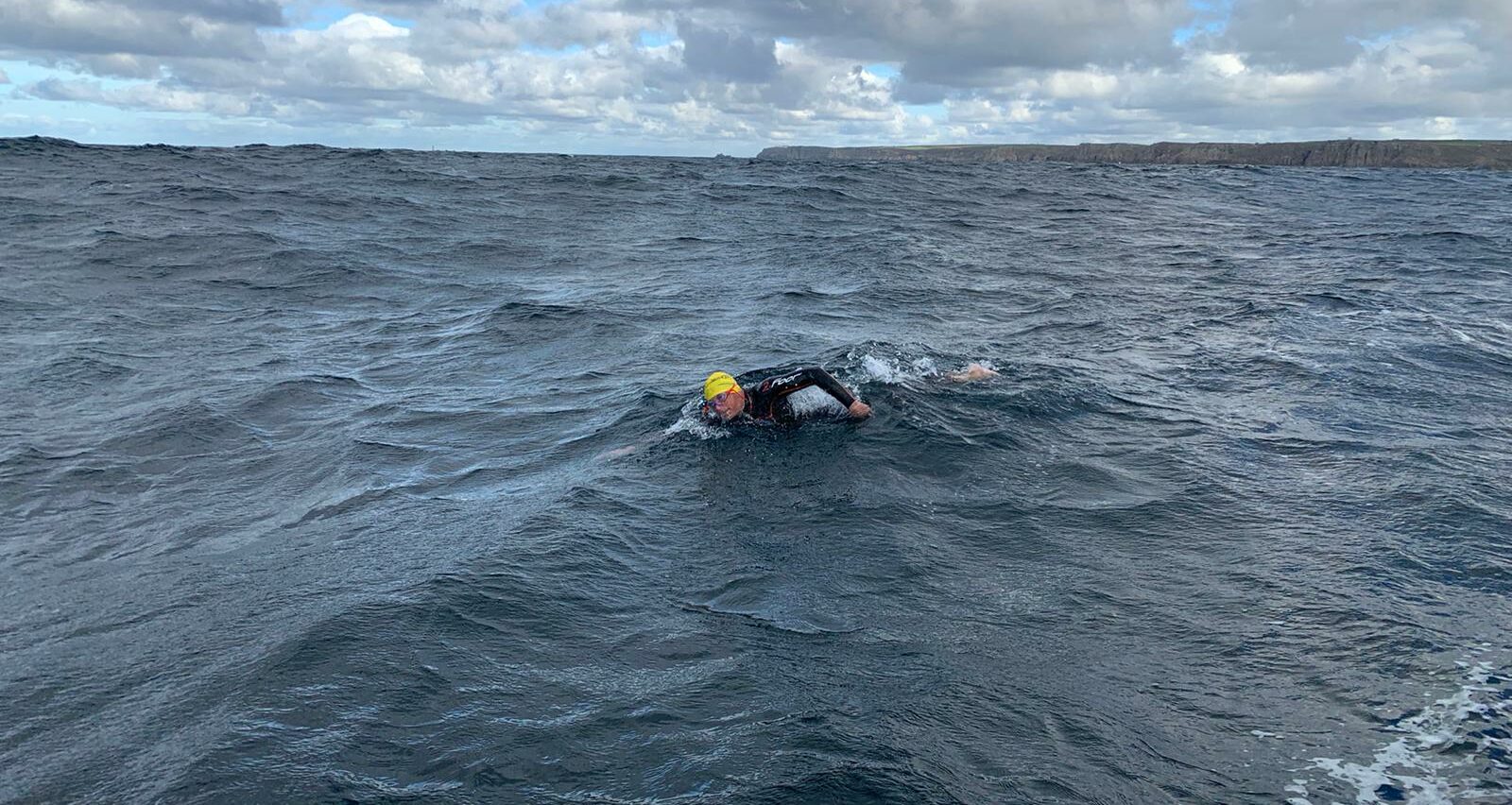 Christopher Woodward is the first person to swim from the artist’s colony of Newlyn, Cornwall to the gardens of Tresco, on the Isles of Scilly.

On Friday 30 April 2021, Garden Museum Director Christopher Woodward finally set foot on the Isle of Tresco, after completing his five-day swim to save the Garden Museum from closure in consequence of the pandemic.

‘The Museum is now safe’ says Christopher. ‘More than safe, as this Emergency Appeal succeeded beyond our wildest dreams. We are ready to re-open with an exciting programme of exhibitions and festivals, and to get back to our work in teaching children about plants and gardens, and building an archive of Britain’s garden history’.

In spring 2020, the Garden Museum announced that it needed £370,000 to save the Museum from the consequences of lockdown. The Garden Museum is the only Museum of its size and reach to be 100% self-funded, as it was set up by volunteers without public funding or a Founder’s Endowment. ‘Overnight’ said Christopher, ‘72% of our income vanished. When we looked at a gap of £370,000 it seemed just impossible. But we had to do something’.

Christopher has done four Sponsored Swims to raise funds for the prize-winning £8.2 million development of the Museum, which was completed in 2017. Each was inspired by the royal gardener John Tradescant (1570 – 1638), whose life and travels inspired the setting up of the world’s first Museum dedicated to gardens.

‘I had run out of Tradescant’s adventures’ continues Christopher. ‘Another Garden Museum hero is Cedric Morris[1], the painter, gardener, and educator. I asked Philip Mould, the gallerist and Morris expert, if Cedric had made any sea journeys that could be swum. Morris sailed on the ferry from Newlyn to the gardens of Tresco in the winter of 1950, said Philip. On the map it is 50 miles. But I had no idea the sea in these Straits would be so rough. Or that we’d end up swimming the Atlantic in winter. This was by far the toughest swim I have ever done’.

Christopher made the journey in three swims: in October and November 2020, and this week. The water temperature was eleven degrees, and the winds reached Force 4.5 on the Beaufort scale. He was guided by John Coningham-Rolls and Alice Todd, founders of Swimquest, with the rib [escort boat] Logan skippered by Charles Hood.

‘What the pandemic taught us is how much people care about places which have an emotional value. On top of the donations, we have had hundreds of letters and emails from supporters telling us why this Museum makes a difference to them. It is this goodwill which keeps you going when you are frozen and tired and battered by the thousandth wave of the day’.

For our size, we have the best team of staff, Trustees, and volunteers of any Museum in the country. I feel very proud that we’ve kept our team of staff together, and ready to get back to work as Museums re-open on 17th May. We’ve just ordered the first trees for our next master-plan: Lambeth Green, a new park around the Museum designed by Dan Pearson’[2].

Break – waiting for the next swimmable tide.

Day 3: 4 November – Woodward reached halfway to the Scillies at Wolf Rock Lighthouse. The second national lockdown, which came into effect on 5 November, necessitated a halt.

Days 4: 27 April – Back in the sea. With the water and weather finally warm enough, Christopher undertook the final leg, kicking off with an impressive 8 miles on 27 April alone.

Why was a sponsored swim needed?

The past year has been unchartered territory and full of risk for museums.

The Garden Museum is one of very few Museums to generate 100% of its income. It receives 30% from donations and membership. The remaining 70% comes from admissions, our shop, the Garden Café, public events, and venue hire. The greatest impact has been on venue hire, the Museum’s most critical commercial activity, with 97% of expected income lost.

The Museum has been saved owing to a combination of the Sponsored Swim, a 10% increase in the numbers of subscribing Friends and Patrons, and generous grants from Arts Council England’s Culture Recovery Fund, The National Lottery Heritage Fund, The Garfield Weston Foundation, The Clore Duffield Foundation, and The Rayne Foundation, and other generous funders.

Since 2010, Christopher has done four swims to help raise funds to build the Museum, and promised not to ask for sponsorship again. Then came the virus.

Earlier sponsored swims were inspired by the life, gardening and travels of John Tradescant, the great gardener whose tomb inspired the founding of the Garden Museum: the Hellespont in 2010, The Strait of Gibraltar in 2011, the Thames from Oxford to London in 2014, and three years ago a section of The Arctic Circle. Since running out of journeys inspired by Tradescant, for this swim Christopher turned to the Garden Museum’s new hero, artist-gardener Cedric Morris.

It’s not too late to support the swim! Donate here

[1] Artist-gardener Cedric Morris’ garden at Benton End in Suffolk was celebrated in one of the Garden Museum’s most popular exhibition to date three years ago. In the winter of 1950 he shut up the Art School he’d established at Benton End, and sailed from Newlyn – the artists’ colony where he had lived in the 1920s – to Tresco. The Garden Museum is now working with the Pinchbeck Charitable Trust to restore and revive Benton End.

[2] At the heart of the Garden Museum is the Sackler Garden. Designed by Dan Pearson as an ‘Eden’ of rare plants, the garden is inspired by John Tradescant’s journeys as a plant collector. Taking advantage of the sheltered, warm space, Dan has created a green retreat in response to the bronze and glass architecture, conjuring up a calm, reflective atmosphere. This is intended to be a garden in which to take your time. Among the foliage in the courtyard garden you’ll find the tombs of the Tradescants, as well as Captain William Bligh, captain of the infamous ‘Mutiny on the Bounty’ voyage.