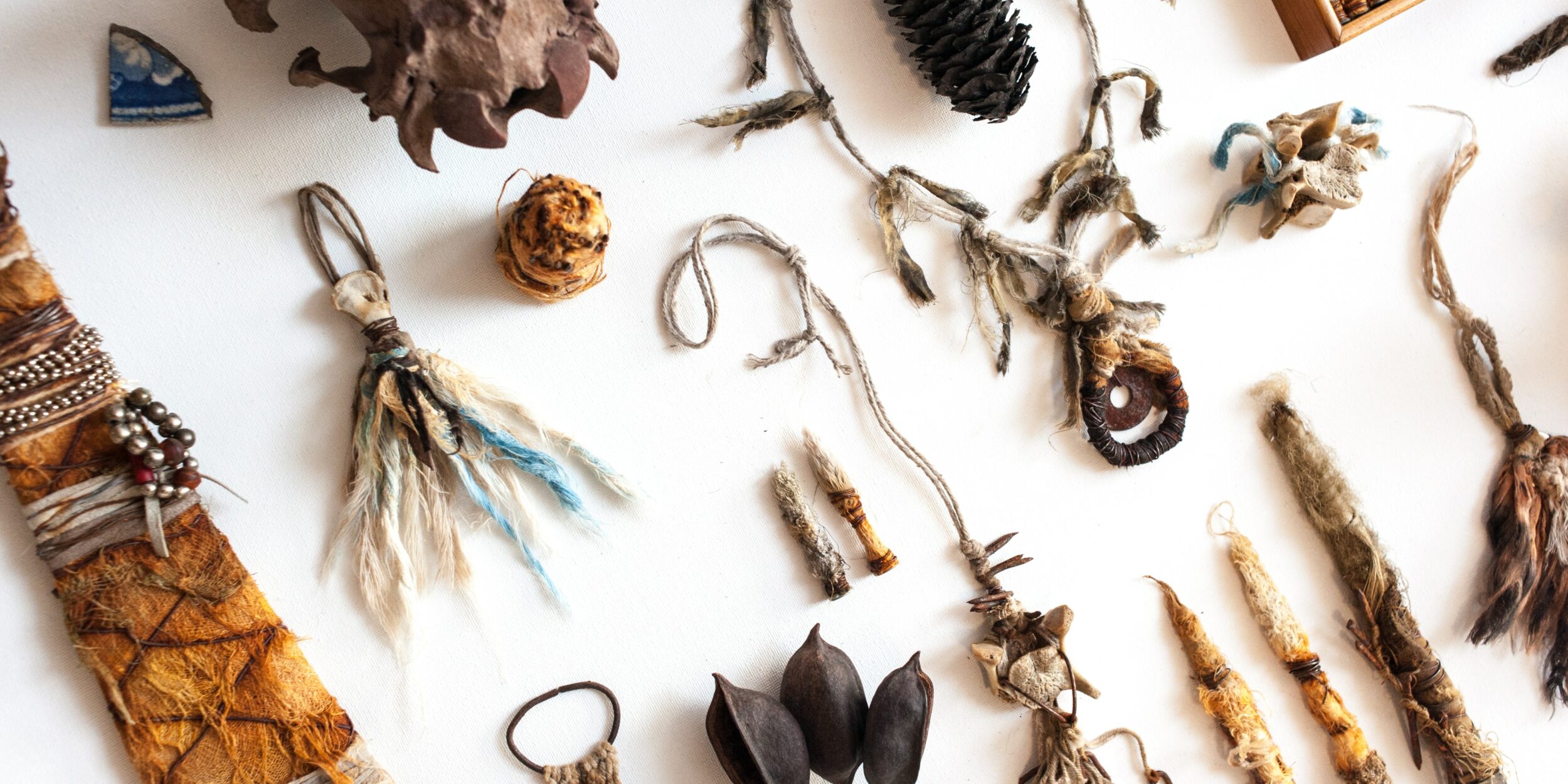 The Curiosity Project is a collaboration between the Garden Museum and Morley College’s Advanced Textiles Workshop Group. In May, students visited the Museum to see the Ark, our new gallery about the Tradescants and meet Emma our curator. They then worked on the project one day a week at Morley College with tutors Debby Brown and Zoe Burt. Students and tutors explored aspects of the original and surviving Tradescant collection which piqued their own curiosity with the resulting work exhibited in two venues. Student work is displayed in the Garden Museum and staff work is shown in the Foyer showcases at Morley College. Both exhibitions finish on 15th October.

The Tradescant family’s collection was part of the wider 17th century movement, seeking to understand the natural world, by discovering, collecting, comparing and classifying plants, animals, minerals and fossils. They also gathered the artefacts of other cultures; fascinated equally by the strange and the everyday. Ancient myths were being increasingly questioned, but in the absence of certainty, why not the hydra, the hand of a mermaid or the unlikely zoomorphic hybrid vegetable lamb?

As gardeners and plant collectors, the Tradescants introduced a huge number of our now common plants and trees, and a number of students have used material and dyes made from these in their work.

The original Ark also contained objects which were interesting by association, from devotional artworks, amulets and talisman to the personal possessions of famous and infamous persons. Henry VIII’s hawking glove and Guy Fawkes’s lantern are still in the Ashmolean collection. Three hundred years on, much remains current and relevant to our own scientific and social curiosity, and the artworks here explore not only the historical objects, but some of the reasons why we still collect. 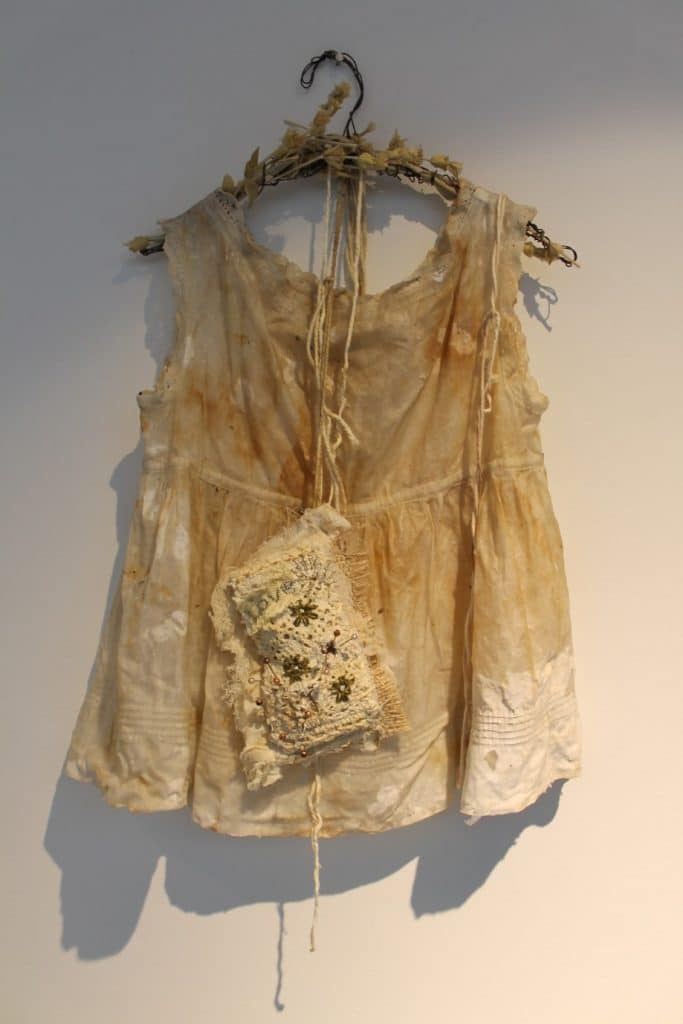 from tradescant’s ark of curiosities: ‘…all kinds of shells, the hand of a mermaid…’ In response to the botanical collection of the Tradescant family and the meanings given to flowers by the Victorians, I have worked with plant material to dye fabrics. Plants include roses, symbolic of love and innocence, hawthorn for hope and rosemary for remembrance. These fabrics have been combined to make pincushions with reference to those traditionally made in the 18th century for layette baskets, when pins were used to fasten baby clothes. The pincushions are both celebratory and intended to evoke a sense of loss as they hang against garments whose fabric has been distressed with rust and dipped in wax, as if they were held in a moment of time. 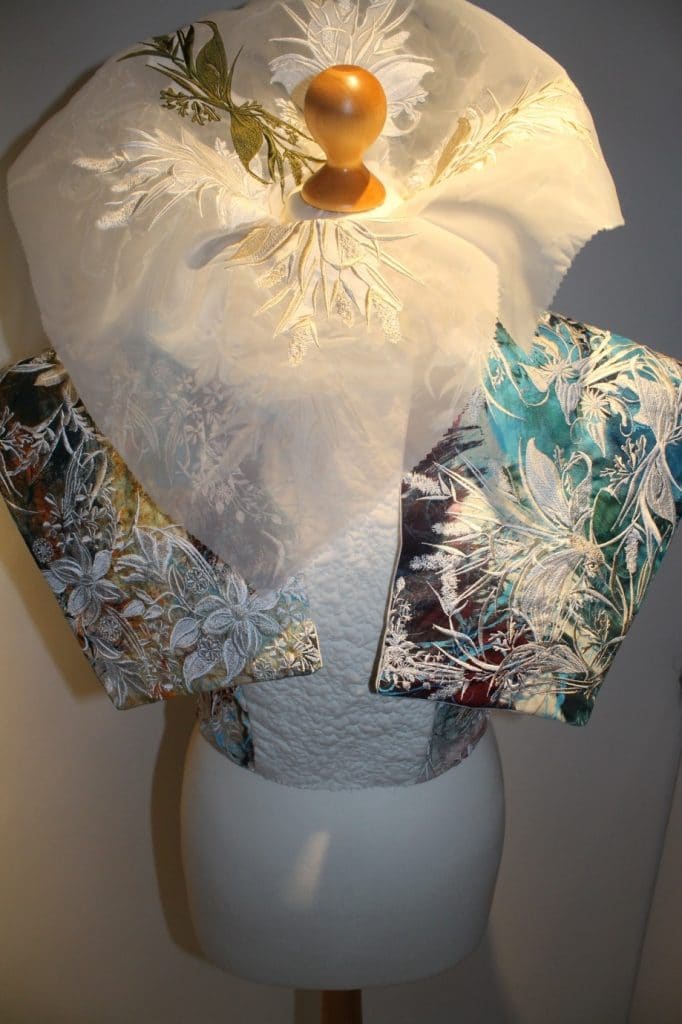 Inspired by a study of the John Tradescants, this piece is an attempt to capture the spirit of the horticulture that their lives were immersed in. This work is filled with the textures, shapes and colours found in plant life. John Tradescant the Elder listed 634 plants in his garden at Lambeth in 1629, I have alluded to just a few. It was important to me to evoke a sense of the 17th century in this piece. I did this by interpreting shapes that are recognisable as clothes from that period, and then allowing them to hint at floral structure. 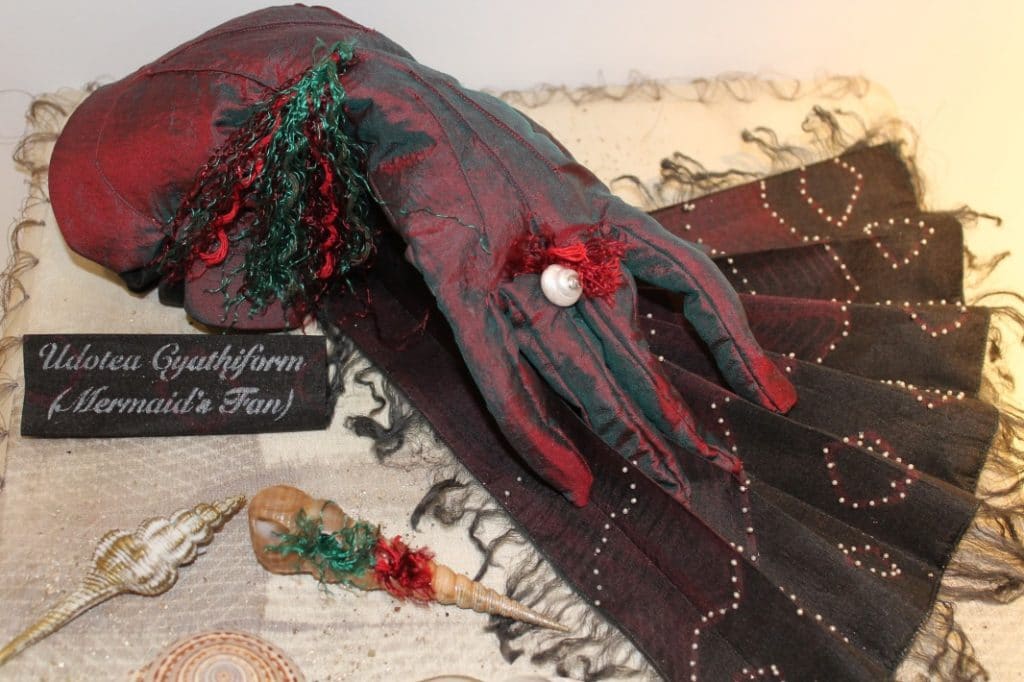 ‘…all kinds of shells, the hand of a mermaid…’

In 1638 German traveller Georg Stirn wrote an account of John Tradescant’s exotic collection. Playing with the scientific and common names of the mermaid’s accouterments has given me scope to experiment and I hope my pieces evoke something of Tradescant’s period and its approach to collection and display.

Researching the Tradescants’ family history, botanical discoveries and cabinet of curiosities led me to another avid collector who lived two centuries later. Allan Octavian Hume was a political reformer, ornithologist and botanist based in British India. His peers called him the ‘Father of Indian Ornithology’. The collection he donated to the Natural History Museum is still one of the largest of its kind. He also was instrumental in the planning and planting of “The Great Hedge of India’ which was put in place to control imports and exports, mainly of salt. On his return to England he founded the South London Botanical Institute to promote the study of botany and house his growing collection of pressed plants. This work travels through the themes of Hume’s life; salt crystals, feathers and a sample of the British wild flower herb robert and combines the processes of cyanotype and bookbinding.

I responded to the Tradescant collection of the Museum by researching which plants they introduced to the country, surprisingly this includes the Horse Chestnut tree which seems so well suited to the landscape that it appears to be a native species. Building on my exploration of natural dyes, I began dyeing yarns and fabrics using Horse Chestnut leaves and bark. These trees are plentiful in London, providing a good opportunity for responsibly foraged dyestuff. Cotton yarn was dyed and woven into a series of small fabric samples. Through weaving British wool with the Horse Chestnut dyed cotton the resulting fabric creates a contrast of material and heritage, illustrating how seamlessly the introduced species has integrated itself.

Fossils were part of John Tradescant’s Ark, mentioned in the Musaeum Tradescantium – the 1656 catalogue of the collection.  In 1638 a German traveller, named Georg Christof Stirn visited the Tradescant collection, and wrote a detailed account. One of the items he wrote about was “a number of things turned into stone” From drawings of fossils, I developed my ideas using felted wool. I enjoyed the challenge of using a soft material to depict a hard object. Hand and machine stitch was added.