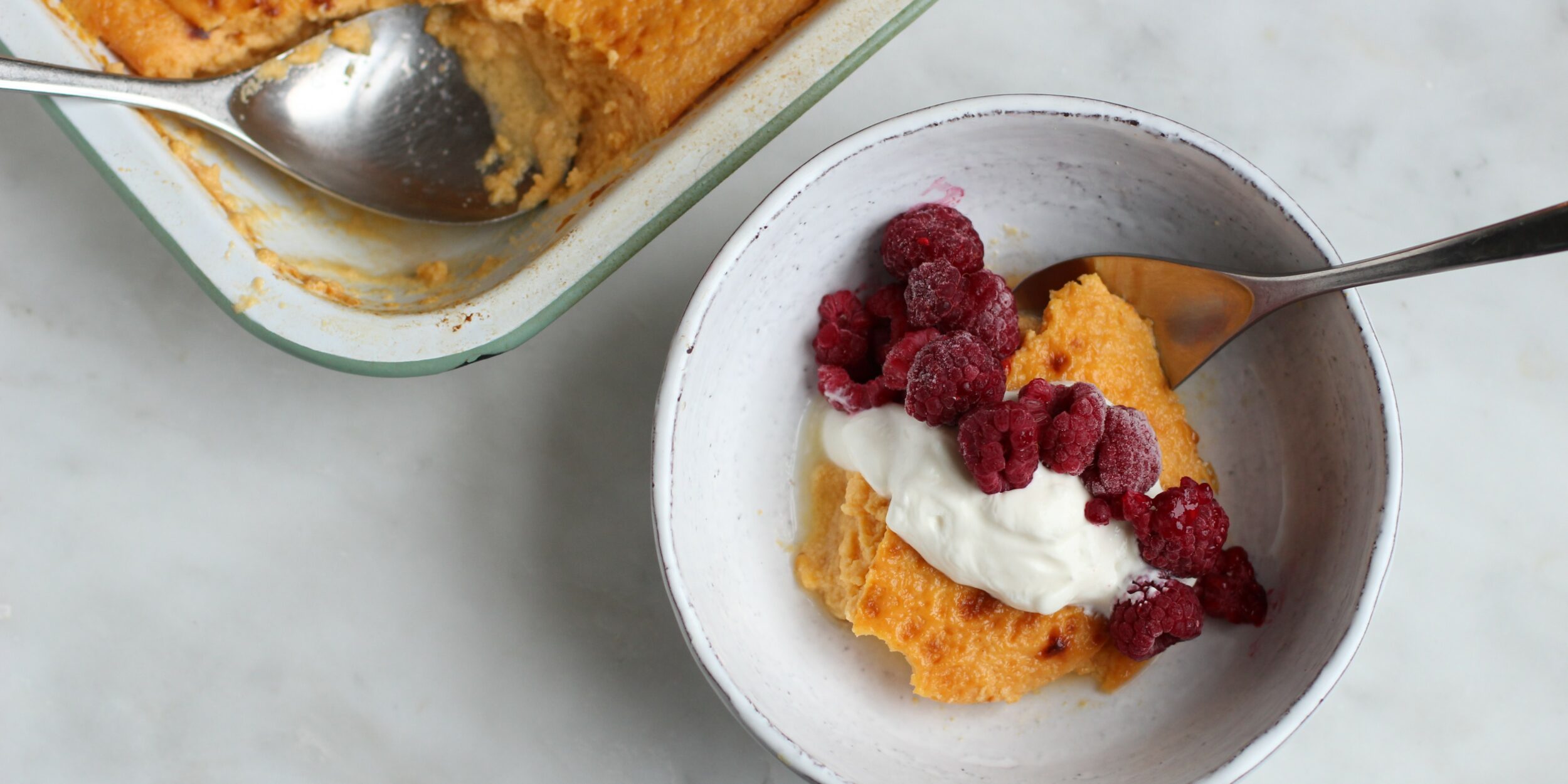 When our Beth Chatto project archivist Jane contacted me to say she had found a notebook full of Beth’s recipes in her recently required archive, it was an exciting moment. I’ve been working as the Food Learning Officer at the Garden Museum for over 3 years and this was the first time that something we held in our collection took the form of an actual recipe.

The notebook in question is a red spiral bound exercise pad, dating from 1994 to to 1999, when Beth must have been in her 70s. It is a cross between a diary and a recipe notebook, one would assume never intended for anyone to read other than herself.

Not yet sure what we would eventually do with this resource, It struck me that the best first move was to cook one of the recipes.

In amongst many soup, stew and salad recipes that presumably made the most of the produce Beth was producing in her garden, there were numerous references to squash pudding custard.

Having never tried a dish like this before, this is the one I decided to cook. I imagined from the ingredients and recipe it would taste something like the filling of an American style pumpkin pie – having since researched a little further, I discovered this style of  squash custard dish is also a popular American dessert.

It’s a fascinating exercise trying to get behind a recipe when it has not been written for publication. There are so many things to second guess, such as what size dish to use, what type of squash, and measurements that may have just been eyeballed rather than measured precisely. None of this would have been problematic to Beth had she looked back in her notebook to re-cook something, because she’d have known exactly what she meant.

From reading the notebook I would imagine Beth grew a lot of squash in her garden – there is mention of buttercup and turban squashes in other recipes. They keep well once harvested so would have been used in recipes throughout the autumn. The squash baked custard, not dated itself, appears just after an entry in January 1999. The only squash I have access to however, some 22 years later in January 2021, is supermarket staple the butternut, so that’s what I went with.

My first hurdle was understanding exactly what ½ pint of baked squash slices meant. Using volume to measure ingredients in this way is an American trait. So, I peeled, sliced and steamed half a medium butternut squash and then crammed it into a measuring jug to get around half a pint in volume. But, how far do you cram the slices in? Did she mean a UK pint or an American pint? (they differ). After liquidising all the ingredients together as suggested in the recipe I was underwhelmed with both the sweetness (it is a dessert after all) as well as the squash flavour, so, I ended up lobbing in all that I’d steamed, which was 450g of steamed squash as well as a few extra tablespoons of honey. I’m pretty sure Beth would have made this recipe with a homegrown squash which would have yielded that sweeter and deeper squash flavour I was hoping for.

Everything else I followed as suggested; a small can of evaporated milk is 170g, I imagined she’d have used blue top full cream milk, and opted for large eggs. I baked it in the oven at 180°C (fan oven) for an hour in a water bath and used a 26 x 20cm dish. I hope Beth had someone to share this with as it made enough for 6 people.

I served, not with a tin of underwhelming orange segments in syrup, nor a drizzle of Grand Marnier (although, I was tempted), but with some frozen raspberries as Beth had indicated this was best.

I didn’t love the end result, which was more ‘eggy’ than custardy, as the mixture had somehow split in the oven.  I am hoping this is because I haven’t done Beth’s recipe justice, but what fun it was to delve into her recipe notebook and write this up to share.

Here is a transcript of Beth’s recipe.

Whizz this lot in liquidiser
Pour into buttered dish
Bake in bain marie for about 1 hour. Temp 180°C

I had bought orange slices in syrup + something alcoholic which tasted of nothing but orange peel. So I added Grand Mariner enough to spike it. Made a good contrast to this velvety custard.
But raspberries & strawberry pulp from freezer were possibly best.