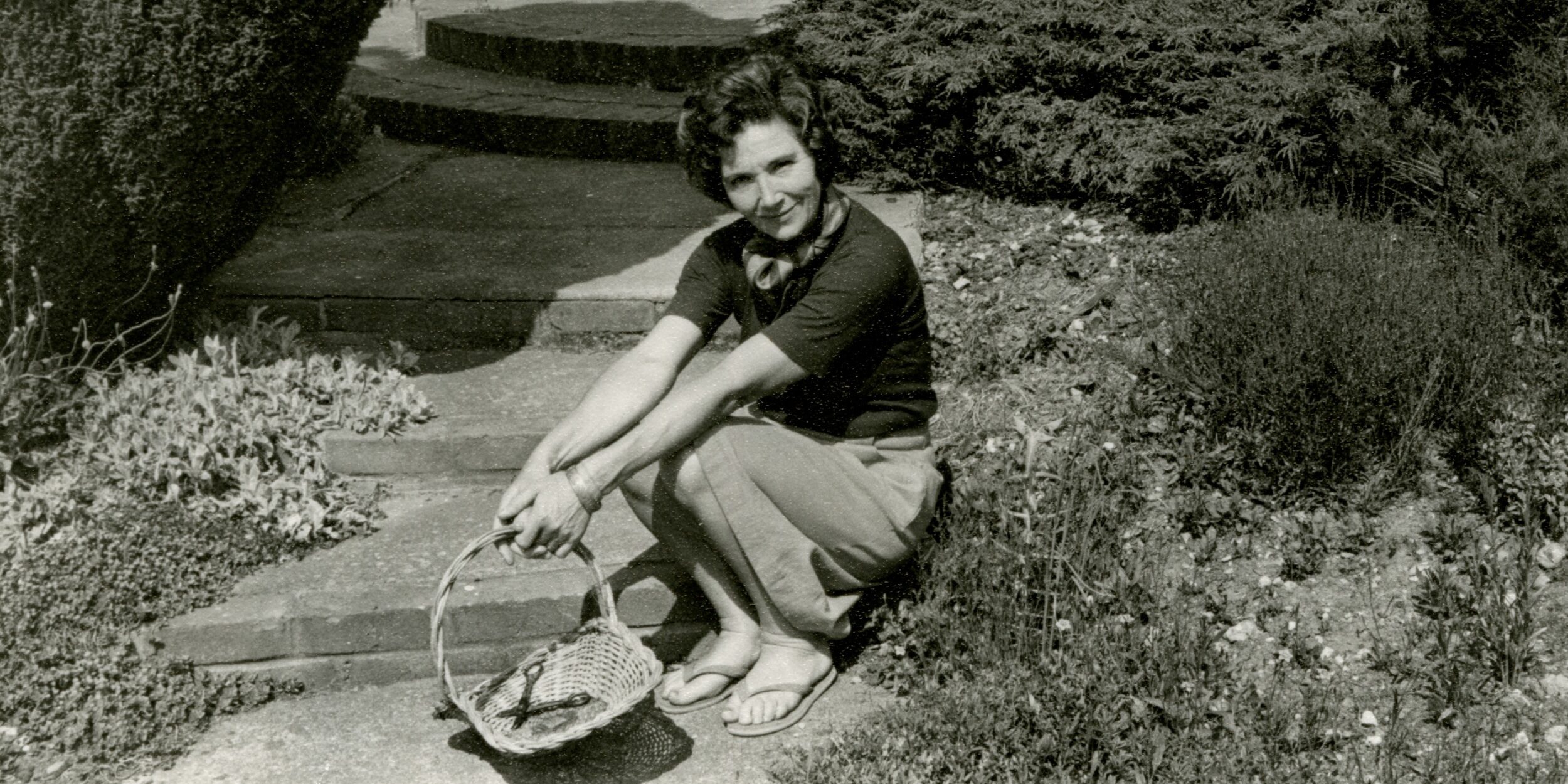 I’m currently working on a box-list of all the documents in Beth Chatto’s archive in order to get an idea of the scope of the collection and how it should be arranged. It’s a huge task  but one interesting thing I’ve found is that reading all someone’s letters and notebooks in a short space of time often makes things pop out that you might not have noticed otherwise.

One theme that comes up again and again is Beth’s interest in food and cooking. While her papers are naturally full of plant lists and discussion about planting there are also dinner menus she saved, many cards from visitors thanking her for delicious lunches, and even a notebook of recipes which I passed a scan of to Ceri, our Food Learning Officer, to see what she made of it

Many of Beth’s favourite anecdotes revolve around making and sharing food: memories of Benton End with famous food writer Elizabeth David cooking in the kitchen and Lett Haines sneaking spoonfuls of caviar to Beth’s daughters while she and her husband Andrew were out in the garden with Cedric Morris. Another great friend of hers, Christopher Lloyd, is the source of yet more food-related stories, including the time he invited Linda and Paul McCartney for lunch and asked Beth to cook because ‘he didn’t do vegetarian’; according to her notes she made stuffed aubergines and lots of salad. She and Lloyd often cooked together when she stayed with him at Great Dixter, while a generous host he also did not like waste: once she was asked to make pastry for a flan case and given a sealed tin of flour dating from WWII to make it with. As they didn’t meet until 1974 the flour must have been quite vintage by the time she encountered it but she recalled that after adding plenty of other ingredients to bulk it out ‘no one came to any harm’.

Her strong interest in cooking can also be seen in her own home, such as in the layout of her kitchen, which was made to her specifications during the building of White Barn House in 1959. The space was designed around her needs and priorities: I noticed she allowed two shelves for bottled fruit.

According to her biography Beth grew much of her own fruit, vegetables and salad but there’s little mention of it in the archives so far, although I have found a few clues in odd places. For example, one of her pocket notebooks is full of shopping lists which mainly consist of dry goods such as oats and flour, dairy products, citrus and dried fruits and rarely salad or vegetables. There is the occasional tomato on the list, contrary to her claim in an interview in 2005 that she ‘never-ever’ bought them, however I can give her the benefit of the doubt: this particular notebook is obviously written years earlier so it’s possible she was growing more by then.

What did strike me is that, in all the hundreds of articles published about Beth and her gardens, there are less than a handful that mention her kitchen garden at all despite plenty of letters from journalists thanking her for lunch! The ones that do have both recipes and useful tips, from storing vegetables for winter to natural pest control methods, so I find it puzzling that there aren’t more. Especially as there’s precedent: Christopher Lloyd published a book of his own tips and recipes as ‘Gardener Cook’ in 1997, and Beth mentions some herself in ‘Beth Chatto’s Garden Notebook’.

So what was the reason: did she prefer that the public focus on the importance of ecological planting? Was it that her organic and mainly plant-based diet was ahead of its time?  This is where the archive reaches its limit, without a written exchange on the subject it’s impossible to know. It may simply be that growing and cooking vegetables for family and friends was something she saw as normal as doing the housework and generally not worthy of comment.

From her own writing it’s clear that Beth found her vegetable garden a solace, it was her private space, outdoors but away from the public and the business of managing her famous garden.  It was small in comparison to the main garden and nursery but grew enough produce to share around the village and give away to her visitors. Her notebook of recipes includes ideas to use up surplus vegetables, such as a giant pumpkin (weighing over 100 lbs) grown by her estate manager Keith Page, which was made into pumpkin, ginger and tomato soup, presumably among many other dishes. There are lots of recipes for pumpkin and squash in her recipe book, including a rather intriguing custard. She described this cooking style as ‘country’ but despite offering simple fare she obviously took great pride in her hospitality and many of her lunch visitors became lifelong friends, as can be seen from this card from Countess Helen von Stein Zeppelin. 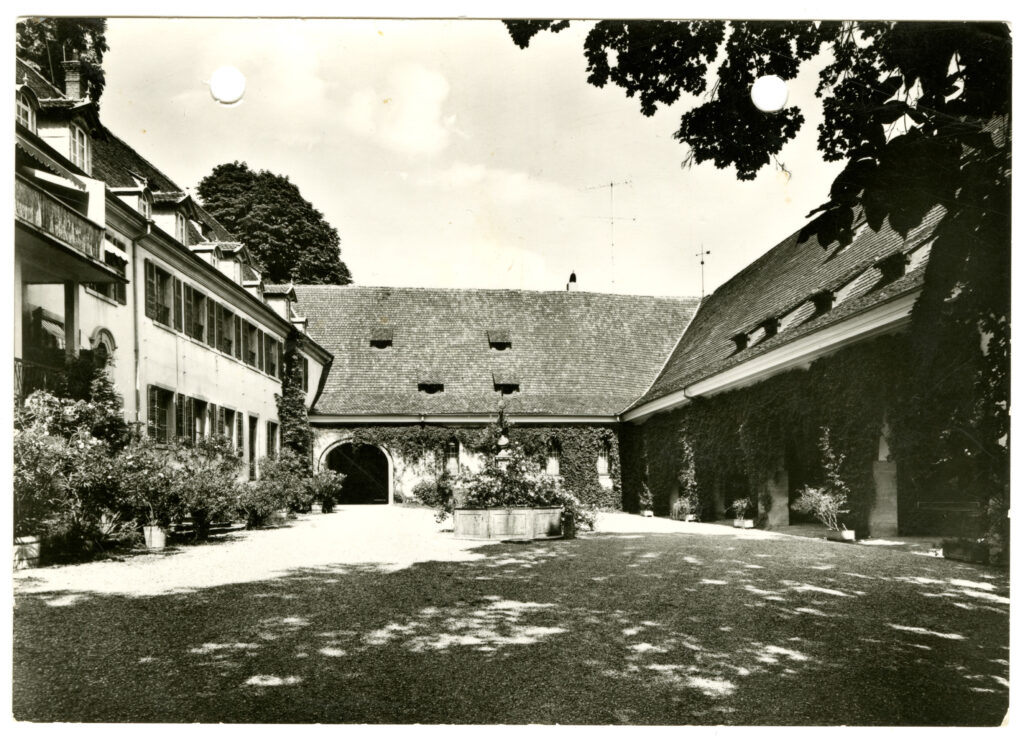 But you can’t always please everyone; one story told in her ‘Garden Notebook’ is the time she invited Elizabeth David to lunch. She was quite nervous about hosting such a prestigious cook but decided to not to try and compete with restaurant cooking and instead gave her a simple vegetarian lunch of soup and salads with raspberries, cheese and homemade oat biscuits for dessert. She notes the recipes in the book and was happy that David appreciated the ingredients such as rocket, then hard to find in the shops. However, according to Beth’s biography, David (who was in the process of publishing a book entitled ‘An Omelette and a Glass of Wine’)  later mentioned to a mutual friend that she would have preferred some French white wine and maybe something ‘eggy’. In that case it’s quite possible that in this case Beth would have had better luck serving one of her squash custards for pudding.