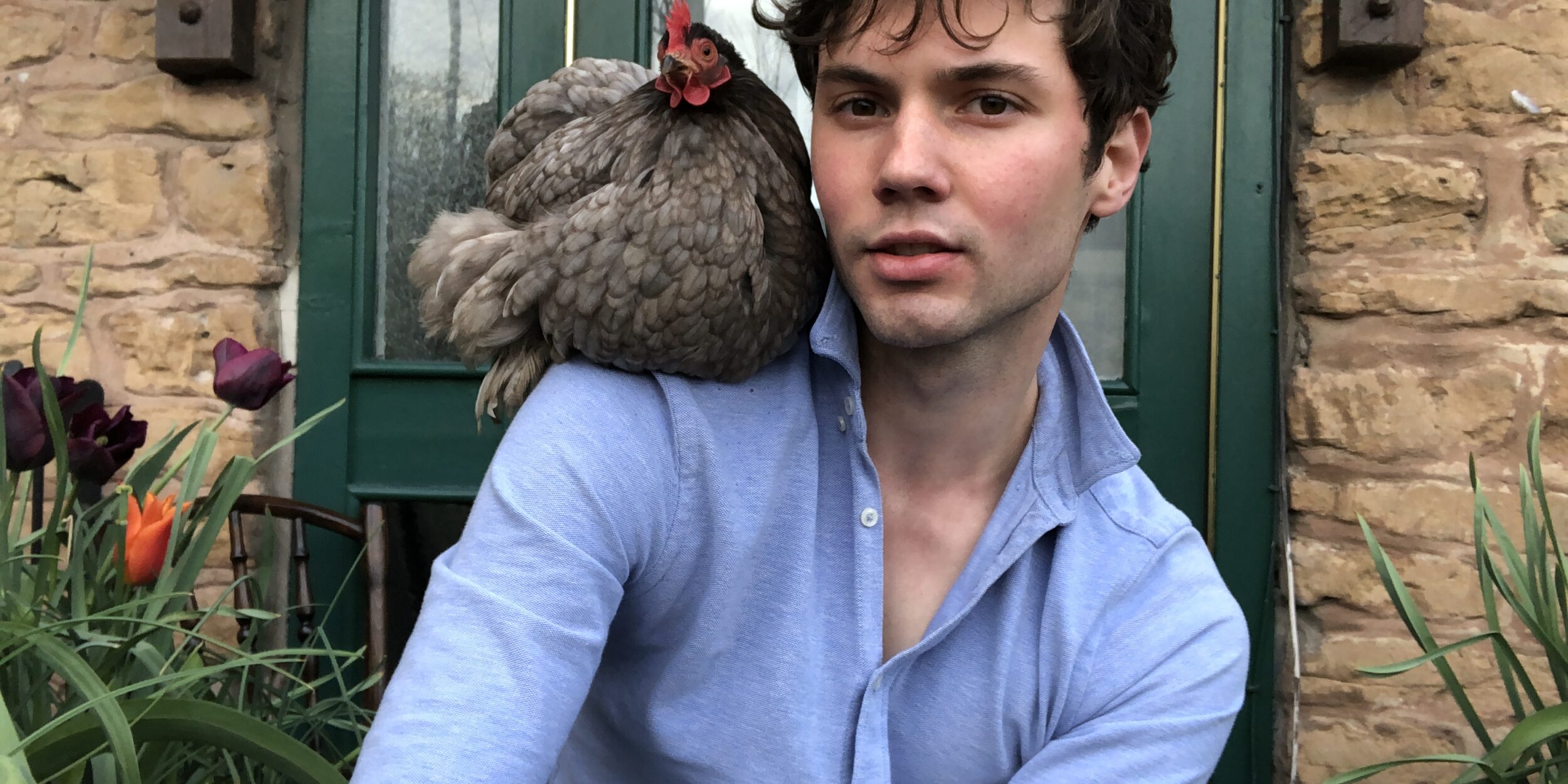 In our series on gardening in style, we’re asking some of our favourite garden people, “What do you wear to garden, and why?” Our latest contributor is author, gardener, and proud bantam hen keeper Arthur Parkinson: 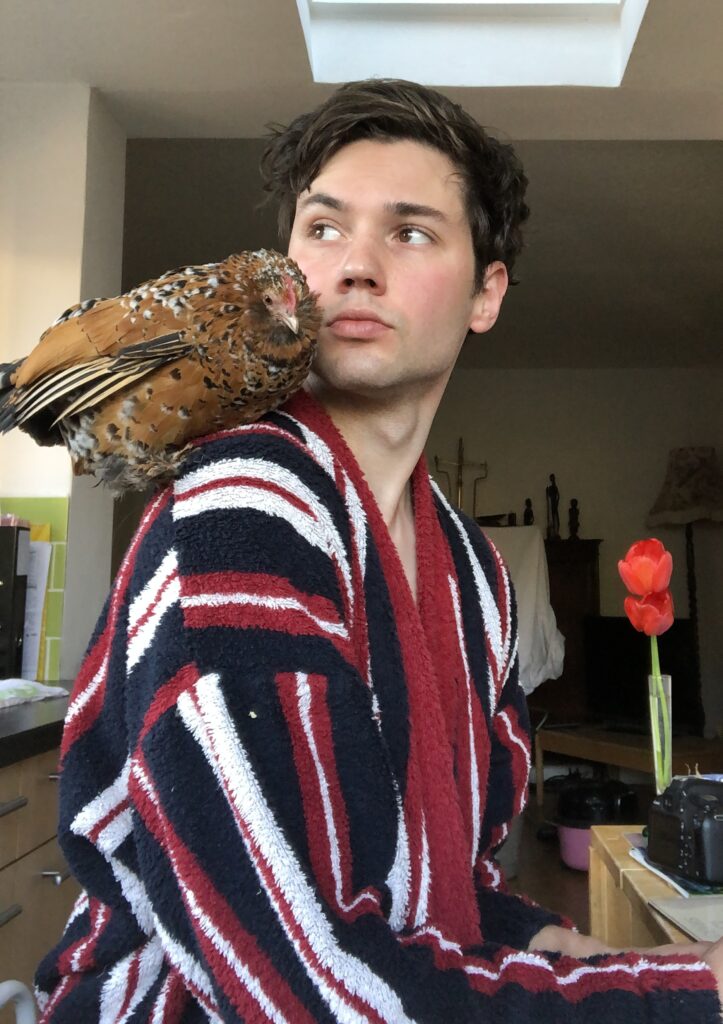 I have a lovely Barbour jacket, that is I had one until last week. I was treating my bantams for something called scaly leg mite, a microscopic menace that deforms their feet. To defeat it you have to dunk each foot of a hen into a jam jar full of surgical spirit, then they get a good smearing of hand balm as a moisturiser. The jam jar in question that was filled with spirit, I put into my jacket pocket. The jar leaked, resulting in the Barbour now being fatally ruined, stinking of turps, it’s somewhere in the garage now in a banana box.

And so me and clothes aren’t friends. We often treat one another quite badly, carelessly chucked on the floor, on door hooks and onto the backs of chairs when they should be on hangers. My bedroom looks often like a Helena Bonham Carter as Princess Margaret’s boudoir stage set.

This is at odds as to how I love clothes in costume dramas. My latest obsession is Hulu’s 18th century feminist romp Harlots, which sees Downton Abbey’s Jessica Brown Findlay, Lesley Manville and Liv Tyler cast furiously together navigating the London scene of society, madams and whores as portrayed in William Hogarth’s paintings, The Harlot’s Progress. I’m craving a wig! 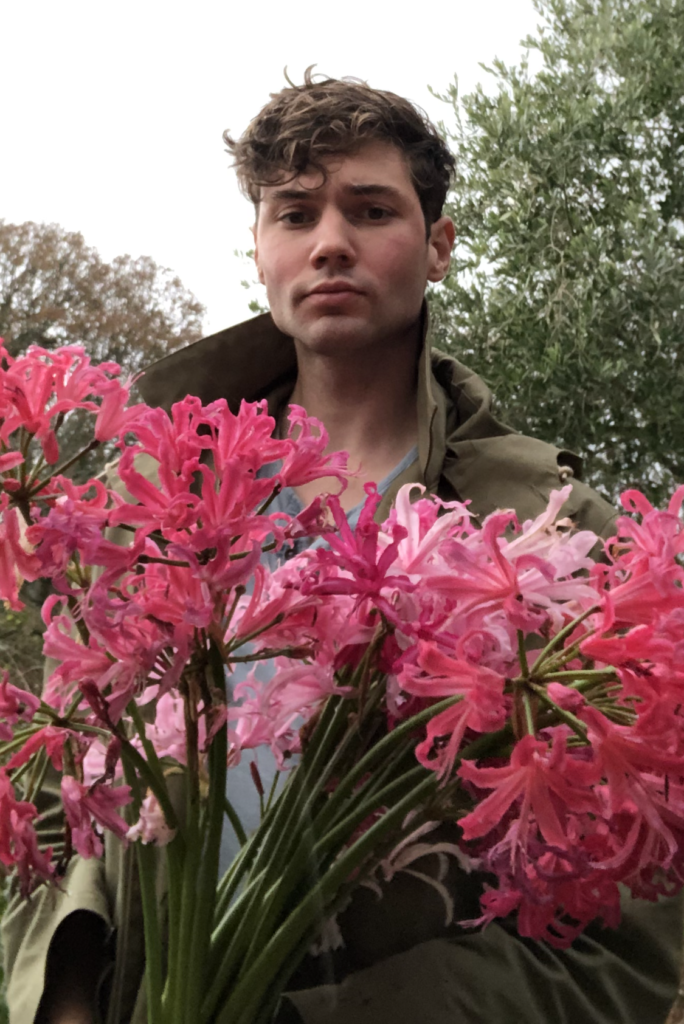 Perhaps I am a fraud when it comes to how style myself via my Instagram because, I’m afraid to put that I’m not really the sort of gardener that walks around with flowers in my hair, sorry to disappoint (possibly) but these are for selfies only. Then the flower goes in a vase and my flamboyance is gone, just a curly mess of hair remains.

My reality is me looking like a scruffy moulting pheasant that hasn’t dust bathed, all creased up complete with fiery cheeks, muddy shoes, skinny jeans and blue shirts, cotton or linen that’s me usually. 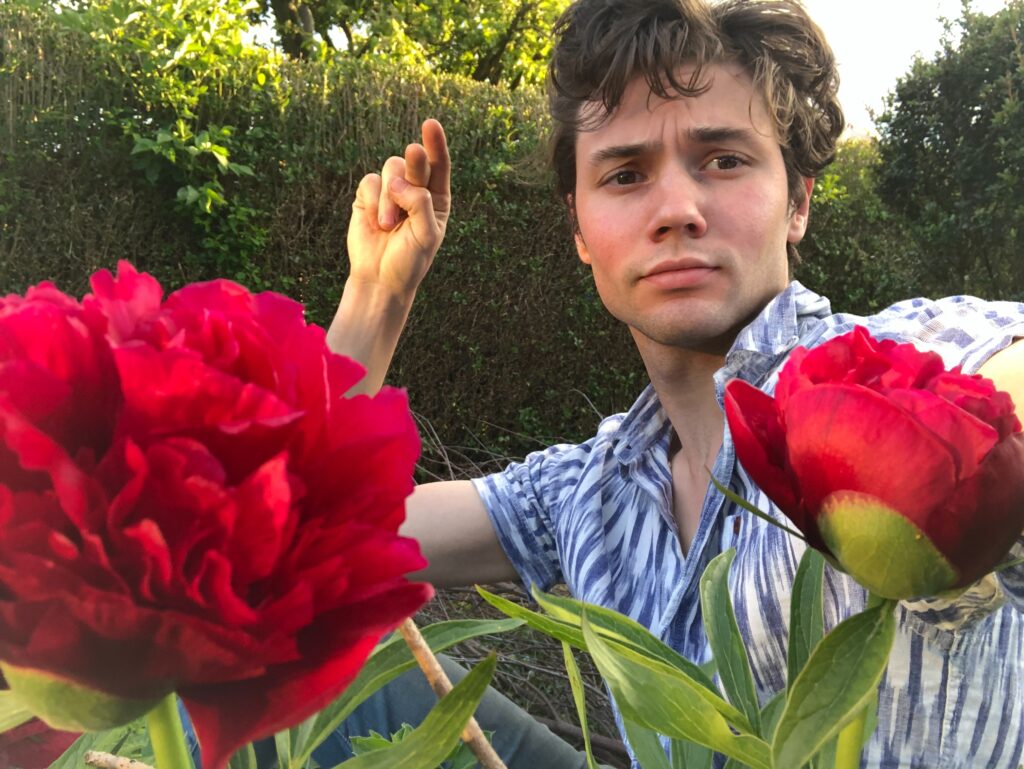 To be honest this was largely the case before I had someone in my life that I wanted to look at least presentable for. I now have a sort of mildly cared for pile of ‘peacocking clothes’ and black, suede shoes that I am determined won’t get scuffed up! I am happy to be dressed and have things chosen for me, a day of clothes shopping I wouldn’t thank you for, in fact the last time I went I found myself admiring a pink octopus cuddly toy more than anything else in a shop, I have to be in the mood.

Increasingly I am attracted to a coral and vermilion orange to break up what was a sea of blue, grey and black fabric, probably because I think about flamingos all the time, but I don’t like floral or patterned shirts really. Some William Morris can look ok though, especially dressing gown and pyjama-wise.

My face mask is one of the William Morris willow leaves. It is completely useless, having been made of curtain fabric so I can’t breathe in it, and of course it’s been in and out of the garden and hen house so many times that it probably harbours more bacteria than it stops if it hasn’t been washed but it’s stood the test of not being lost somehow or other, like an old friend now since March. 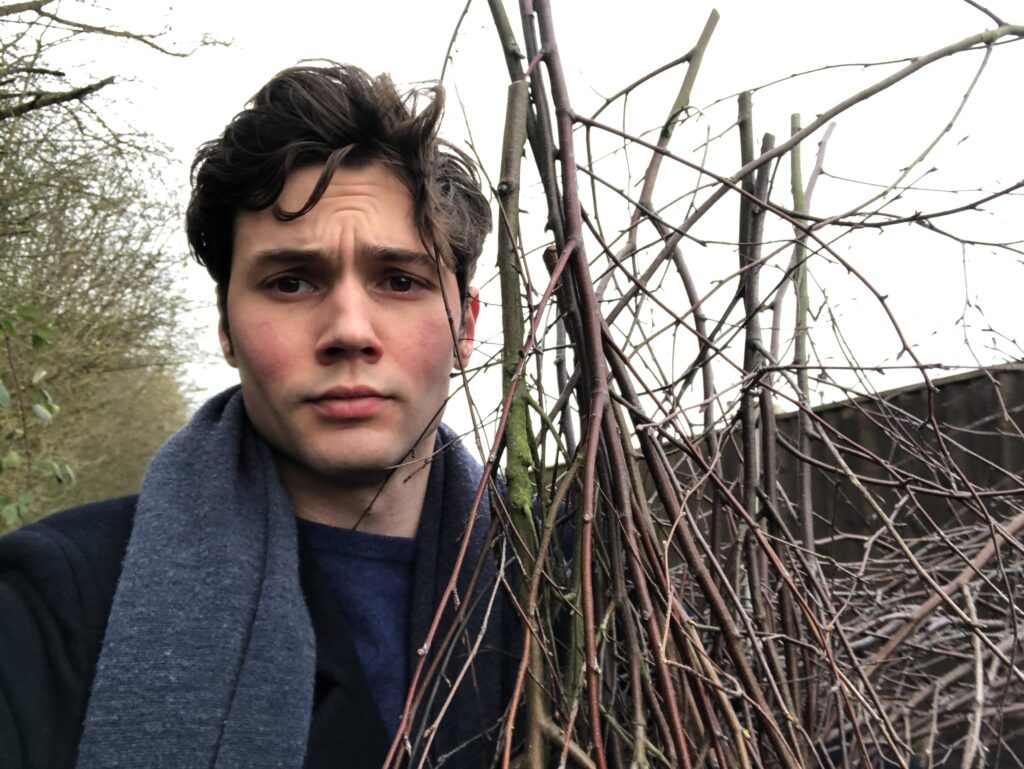 Being warm I think is the most important thing for any gardener. Keep your head and feet warm, that’s what my mum always said to us, but being comfortable and dry that’s so vital. I have a much loved, now beaten up wool scarf from my friend Juliet. Once the frost bites it’s worth its weight in gold, it’s a bit Gandalf the Grey wizard but I love it and it’s too big to easily lose.

Hats that cover your ears and fingerless mittens that I lose many of each winter, good thick, cosy socks, thank you Christmas! Thermals make me too hot but overalls I think increasingly are very helpful, I wear them over jogging bottoms, my dad got me some proper macho ones with bits of sponge on the knees. I love jogging bottoms in contrast to the tightness of ultra, leg sticking skinny jeans, I’m usually in one or the other. I’ll often change into jogging bottoms if I am on a long train journey as they are comfy.

The cousin to jogging bottoms are, I think surely pyjamas. These I like to wear above anything else, I’m waiting for the sparkling golden ones Claudia Winkleman wore a few weeks ago on Strictly Come Dancing to be back in stock, as of course they sold out via IDOL immediately and I have my eye on some which depict flying mute swans.

So I sort of swing from not giving a fig about what I look like to being quite dramatic. A few winters ago I was giddy and to cope with going to visit my Nan in hospital for what seemed like the thousandth time, I swaggered in wearing her long forgotten about full length mink and dark sunglasses. 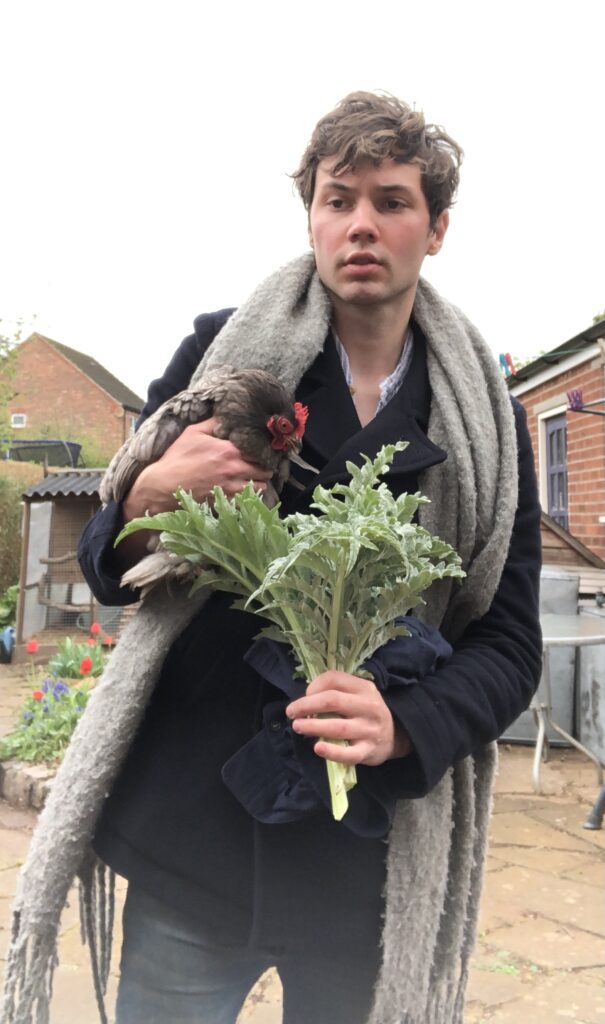 As a child, I never had any awareness or wanting of a designer label and I hate them now, I hate logos. My dad and mum both worked hard but there wasn’t much money and I’m really proud of my mum actually for not being silly and not buying me and my brother anything like that, they would have been ruined anyway. We lived in our Wellington boots as children (still do) and we didn’t have mobiles until we were sixteen, the last generation of children to know a childhood that was largely absent of such things I suppose.

I loved what Clarissa Dickson Wright said once while she was cooking ‘You may think it’s too much effort, it’s too much effort to cook a joint of rare breed pork, well dress ya children in expensive trainers and see where that gets you’ She was so right!

We would have hand me downs from cousins, we didn’t care, we didn’t know at the time, it didn’t bother us. Stuff would be worn to death and then darned by my grandmar Sheila as it fell apart. Sheila is a great knitter, she shouldn’t be knitting now due to arthritis but I discovered she was doing it in secret, making something pointless with cheap wool in awful dead colours. So I ordered her some angora Aran wool in deep vermilion red and so very slowly, she is knitting me a scarf. A few knits a day is the rule, so that she doesn’t end up with swollen hands! My Nana Min, my dad’s mum, would get us things that people had possibly died in from the stall at the Sally’s Army Sunday tea club.

My favourite piece of clothing is actually a grey lambs wool Hawick jumper that Min got me when she attended one of her last teas before getting too poorly with dementia to go to them again. It’s been beaten about and holes have appeared due to both rose thorns and moths but each time Sheila has patched them up so beautifully by darning them like an old teddy bear. So I really cherish it because it’s of both my grans’ now. I should wear it less, but it’s actually beautifully warm and looks trendy so I am told. I was sad to discover that Hawick is no more, a hundred jobs were lost when they closed in 2016. 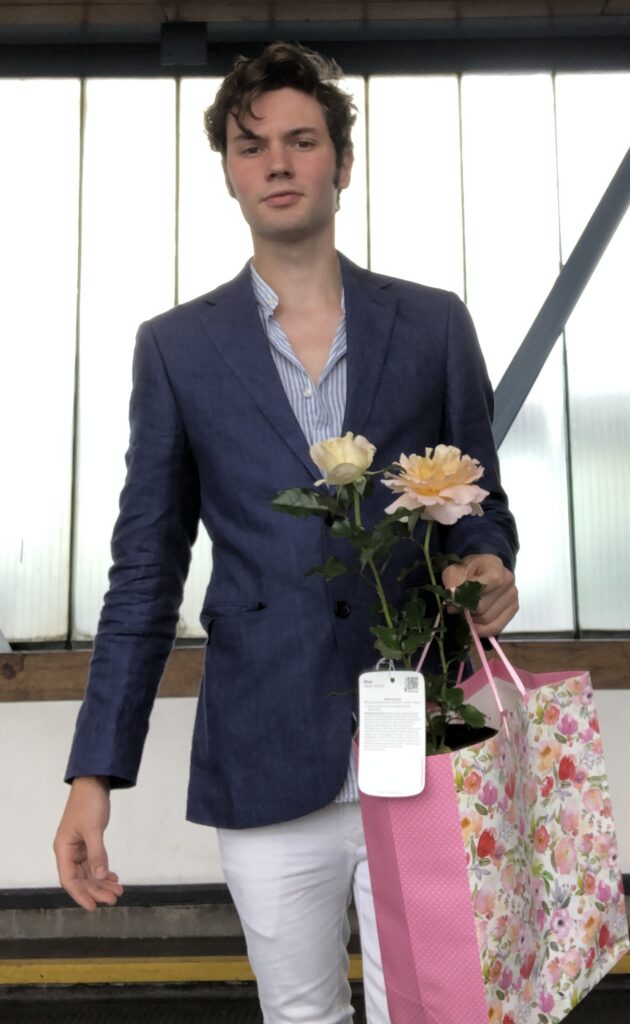 Suits I find incredibly boring, I think they suit men who work out. It’s all about that Greek triangle upper body shape isn’t it? And I haven’t got one of those obviously. I did buy a nice one once though I think it was um, do you know I can’t even remember what designer it was, possibly Ted Baker. But it cost a stupid amount for Chelsea last year and it’s a good, bird of paradise royal blue. I haven’t worn it since, unsurprisingly. I’m learning that it’s all about the fit though and there is a brilliant Italian tailor in Nottingham city centre who I go to if it’s something important. I should take everything there really when the lockdown ends, that’s on the very long to do list. As for the new Barbour to replace the surgical spirit episode, I’m currently bidding on something that’s on eBay. I love eBay it’s where I get a lot of dolly tubs and terracotta pots from. It is blurbed as being a smart navy corduroy cord blazer jacket, the poor bloody thing if it ends up here!

Arthur Parkinson’s second book The Flower Yard: Growing Flamboyant Flowers in Containers is out next March. Signed copies can be preordered via sarahraven.com