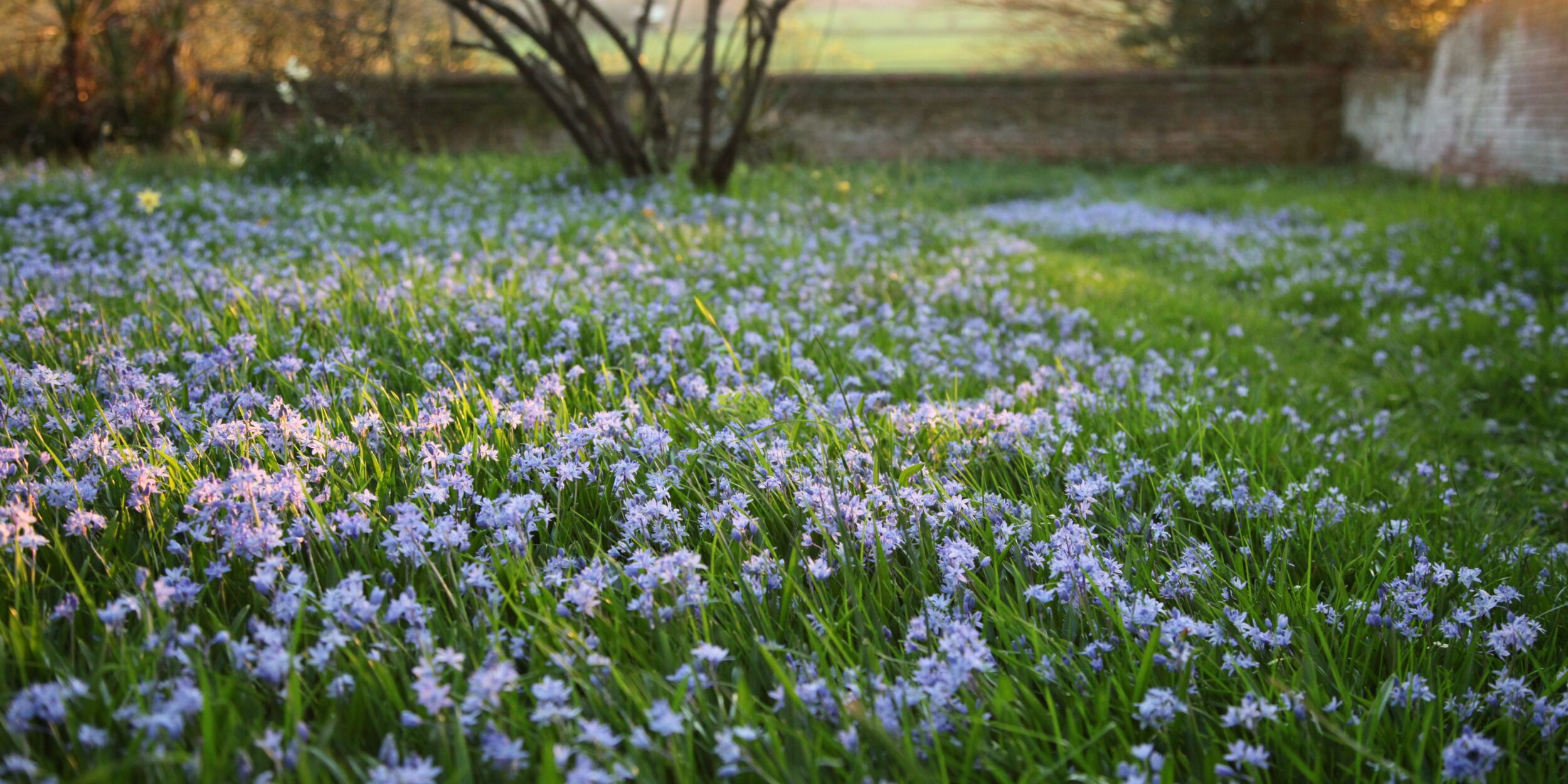 In August last year, our head gardener Matt Collins moved to Benton End in Suffolk, once home to artist-plantsman Sir Cedric Morris (1889-1982) and the East Anglian School of Painting and Drawing. Occupying the coach house cottage opposite, he and his wife Clemmie, and one year old Emlyn, are temporary custodians, keeping watch over a garden overgrown yet still graced by remnants of Morris’s former botanical treasure trove: shrubs, trees but also species bulbs, many of which were collected during his winter trips through the Mediterranean and North Africa. A spring update from Matt:

I’m not sure I can remember a year when I’ve felt more poised and eager for the ground breaking and seed sowing of spring — new to East Anglia I ask the question, is it always so chilly in late- March? The mornings here at Benton End, often bright but still hovering low around the 4-6 degree mark, remind me that, yes, it is still too soon; be patient. Sweet peas, at least, have begun on the windowsill, mingling soft shoots with the chitting potatoes as together they get a head start on seeds destined for the veg beds. But these are no ordinary sweet peas: they arrived in the post some weeks ago from landscape designer Dan Pearson, collected in folded paper with a note describing a circuitous journey that began at — and has now returned to — Benton End.

They are a ‘pure’ Lathyrus odorata, of heavily scented plum-violet, first gathered by Cedric Morris on a trip to Sicily. Morris, known for his generosity with plants, later shared a handful of subsequent seed with former Gardens Editor of Country Life (and regular Benton End visitor) Tony Venison, who in turn shared alike with a friend, Duncan Scott. A chance meeting between Scott and Pearson saw a further exchange of seeds, and Morris’s sweet peas found a home in Dan’s garden at Hillside, near Bath; content, no doubt, sharing ground with the numerous Cedric Morris irises already growing there.

Plants returning to Benton End is the present theme. Though we are not looking to return the garden to its former incarnation, or to recreate a time and a certain energy that cannot be recreated, it feels enlivening to see some of Benton End’s floral residents repatriated. Morris was fairly unique in appointing a plants executor (friend and horticultural comrade, Jenny Robinson) to dig up and disperse the majority of his garden plants after his death in 1982 — they were parcelled away in a spirit of ongoing generosity to friends and plant collectors across the country.

Thanks to a call out by Benton End researcher, Lucy Skellorn, their descendants — divisions, seeds, cuttings and seedlings — are beginning to trickle back. From Frances Mount, who assisted Morris in the garden at Benton End through its latter years, we now have plants including dainty Anemonella thalictroides, Geranium malviflorum and Iris foetidissima var. citrina. Fiona Bonny, who also gardened with Morris, has kindly donated, among others, divisions of pretty Asphodelus lutea and an intriguing giant hogweed. And in the post just recently arrived beautifully packaged bulbs of Narcissus ‘Cedric Morris’ and the two snowdrops born of Benton: Galanthus ‘Benton Magnet’ and G. ‘Cedric’s Prolific’. These were sent by Jane Rowlinson of fantastic bulb specialists, ‘Morlas Plants’ in Shropshire, suppliers of rare snowdrops and erythroniums, predominantly.

All plants have for now been accommodated and labelled within two stock beds in the top garden — one shadier than the other — the digging-over of which was among the tasks that have kept me both warm and occupied through the recent winter months. Since Christmas, such tasks have mainly been of the ‘housekeeping’ variety: tidying away leaves, trimming up fallen trees, preparing compost bins, tidying the greenhouse etc; all the while treading carefully enough so as not to hinder plants both precious and inconspicuous.

But we’re past the Vernal Equinox now and spring is upon us; in the walled garden — where, during Benton’s 1940s- ‘70s heyday, students of the East Anglian School of Painting and Drawing would capture Morris’s unusual blooms in oils and watercolours, and the likes of Vita Sackville-West, Beth Chatto and Constance Spry would drop by for planting inspiration — buds are colouring on tall imperial fritillaries, leaf-break is visible in the trees; leucojum and narcissi have up and flowered, including a particularly fragrant and multi-headed N. italicus possibly collected by Morris on his Mediterranean travels, and the mixed whites, violets and magentas of Corydalis bulbosa once again pool below the garden’s aged and stately medlar. Meanwhile, anemones, widow irises, scillas, muscari, ornithogalums and some of the more diminutive and fragile fritillaries that were once a revered spectacle at Benton End are steadily rising from the undergrowth, and I hope to report yet more exciting blooms in the months to come.

A version of this article was originally published in the Benton End newsletter: sign up here