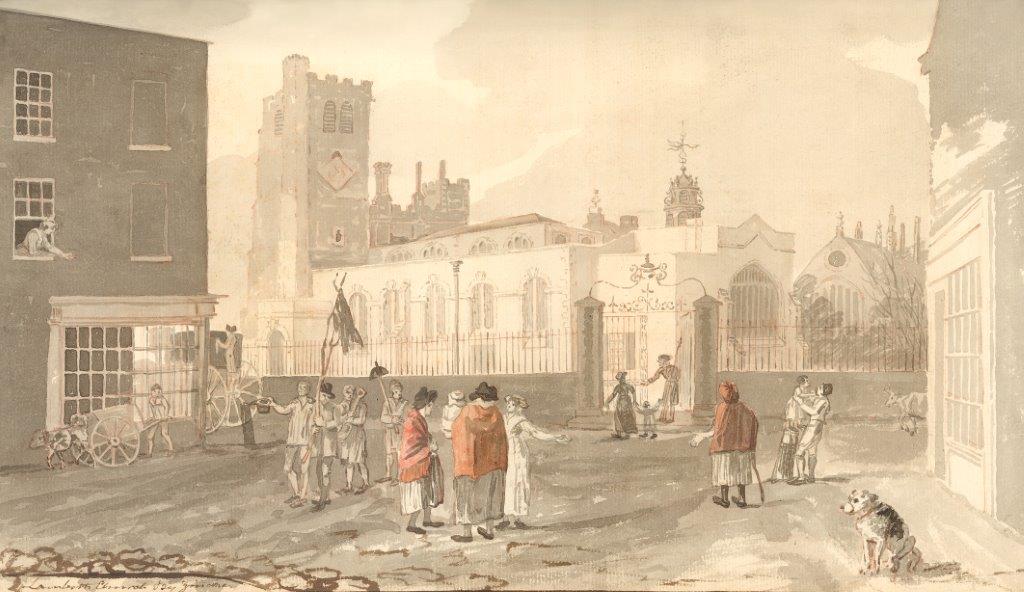 The Garden Museum is housed in the medieval and Victorian church of St Mary-at-Lambeth.

The first church on the site was built before the Norman Conquest and was integral to the religious centre established by the Archbishops of Canterbury in the twelfth century. The structure was deconsecrated in 1972.

The church is the oldest structure in the Borough of Lambeth, except for the crypt of Lambeth Palace itself, and its burials and monuments are a record of 950 years of community history.

A wooden church is built on the site of the Garden Museum by Goda, sister of Edward the Confessor; the Doomsday Book records 29 tenancies in her manor. Later in the century it is rebuilt in stone and becomes the church to the Archbishops with their London lodgings next door.

The Church St. Mary-at-Lambeth is mentioned in the Domesday survey of King William I

The church is rebuilt including the bell tower; it is repaired in 1834–35 but otherwise the tower visitors can climb is original to the 12th Century.

The prestige of the church is reflected in the wills of many citizens who ordered tombs for themselves, particularly in the Chancel. The most significant is the chantry tomb to Hugh Peyntwyn (d. 1504), which is the earliest known example of a new design of wall monument associated with the royal workshops. Opposite is a monument of the same type to John Mompesson (d. 1524): St Mary’s is unique in having two monuments of this type. These can be seen in the Ark Gallery.

Plant hunter and gardener John Tradescant dies, he is buried in the churchyard of St Marys-at-Lambeth

Wenceslaus Hollar is thought to have stood on top of the tower of St Mary’s-at-Lambeth to draw his 1647 ‘Prospect of London and Westminster.’

John Tradescant the Younger dies. His widow Hester erects a decorated tomb in the churchyard as a family memorial.

Admiral William Bligh, who lived at 100 Lambeth Road, dies and is buried in his family tomb in the churchyard.

The churchyard closes to new burials; it is estimated that there are over 26,000 burials on the site of the church and the level of the site has risen in consequence.

The body of the church is continually rebuilt and developed over the centuries but, decisively, in 1851-2 the aisles and nave are rebuilt by Philip Charles Hardwick, an architect prominent in the construction of banks and railway stations but not considered to be in the “first rank” of his generation. His father, Sir Philip Hardwick, designed the Euston Arch. Hardwick’s work is described by the Museum of London Archaeology Service as “an almost complete rebuilding of the old body of the church”. The most eye-catching survivals are four of eight corbels in the ceiling of the nave, these are a mix of medieval and Victorian construction.

One of the few twentieth-century interventions takes place with the insertion of an immersion font, said to be one of only two examples in Anglican churches in England, and a baptistery at the base of the tower.

Bombing during the Second World War damages the church, including the stained glass windows, and breaks up the altar donated in 1888 by Sir Henry Doulton as a memorial to his wife. Doulton’s factory of ornamental ceramic ware stands just 300 metres to the south of the Museum.

The stained glass damaged in the war is replaced by plain glass and panels by Francis Stephens (1921 – 2002), including a replica of the “Pedlar’s Window”.

The church is made redundant in consequence of its dilapidation and gloom, and also because of changes in the population settlement of the parish: the area by the riverside has become derelict and under-populated, and the Vicar wants a church closer to where the congregation lives. In 1969 Lambeth Council designated the area around Lambeth Palace as one of the borough’s first conservation areas.

Soon after the Church Commissioners obtained the necessary consents for demolition; the altar, bells, and pews are removed.

Rosemary and John Nicholson visit the site to see the tomb of John Tradescant and are shocked to discover the church boarded-up in readiness for demolition. They establish the Tradescant Trust, which was awarded a 99-year lease from the Diocese of Southwark, who continue to be our landlords. The Trust’s rescue and repair of the church structure becomes one of the great architectural conservation causes of its time, and the church is converted into the world’s first Museum of Garden History.

Find out how St Mary-at-Lambeth became the Garden Museum