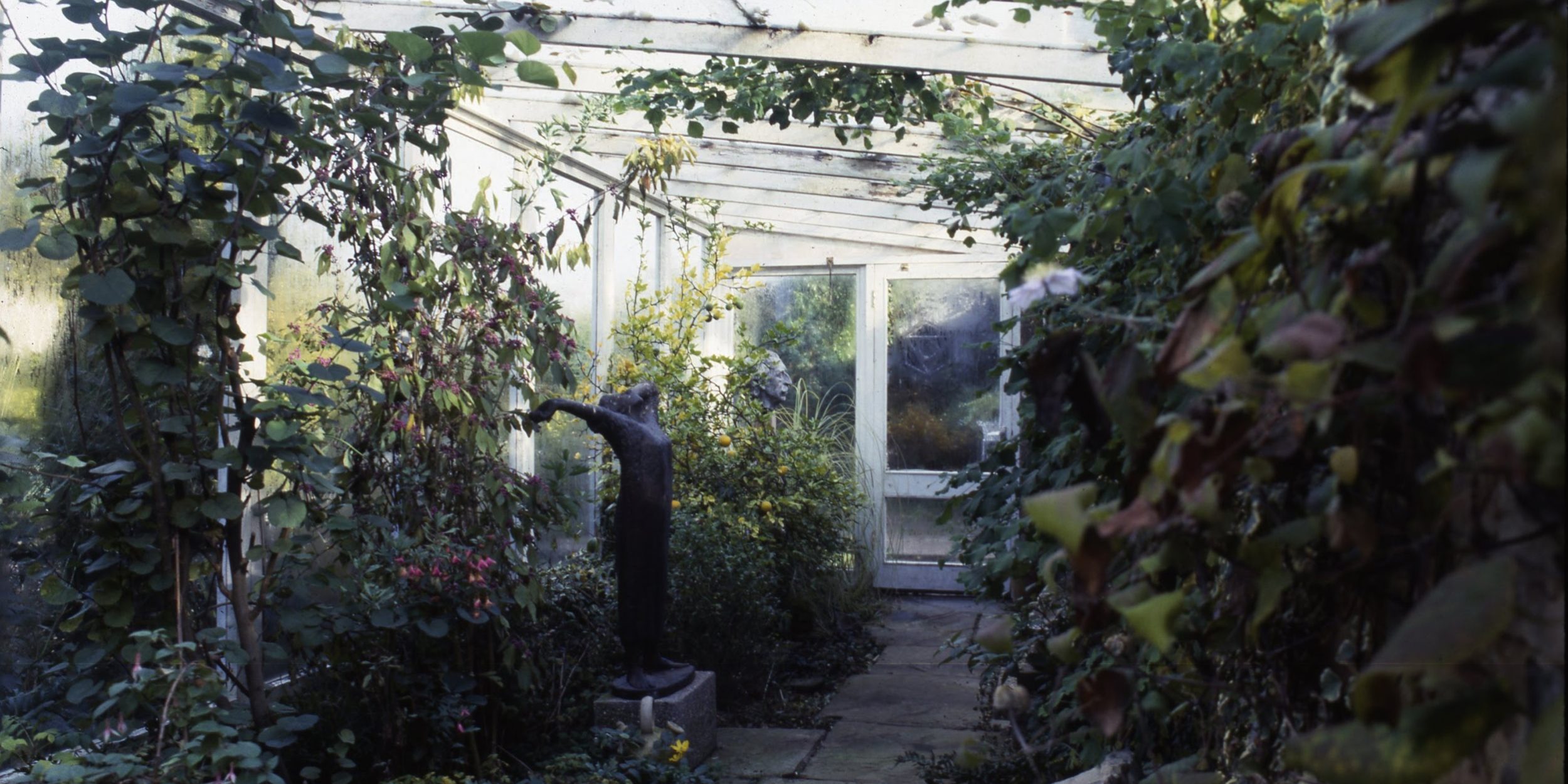 In late 1999 to early 2000, long-time volunteer Philip Norman wrote dozens of letters to everyone who was anyone in the horticultural world, asking if they had any items they could spare to help us create an archive of 20th century horticulture and garden design. One of those who responded was Lady Gibberd, the wife of Sir Frederick Gibberd (1908-1984), an English architect and town planner famous for designing modern architectural icons including Heathrow Airport and Liverpool Metropolitan Cathedral. Known as ‘the flat Architect’, Gibberd is synonymous to many with big concrete buildings, yet the one garden he created, his own at Marsh Lane, Harlow, on the outskirts of the New Town he planned, is a stark contrast to his other work. A whimsical playground of sculptures, ceramic pots and architectural salvage, the garden provided respite from the pressures of Gibberd’s large architectural practice, which is still in business today.

Lady Gibberd’s gift was one of the first archives that the Museum acquired, and it came with her husband’s tweed gardening trilby, complete with soil marks! The photographs of the garden and Gibberd’s lecture notes, ’On Making Gardens and Landscapes’, reveal the beauty and ingenuity behind his one and only garden design. Here, Archivist Rosie Vizor shares some of the highlights from the archive.

When Gibberd was appointed Master Planner of Harlow New Town in 1946, he began looking for somewhere nearby to create a landscaped garden that would fulfill his ambition to create a work of art. He discovered the Marsh Lane property, advertised by the estate agent as a ‘small farmery’, and moved there in 1956.  Notes in his archive state that the garden ‘was not to be a flower garden, a natural garden, a formal garden, a sculpture garden. All I wanted to make was an original garden. It was no longer to be a farm with labourer’s cottage and a quiet spare house for the gentry, but a country house in the setting of a garden’. He continued to work on the garden until his death in 1984. It occupies 9 acres of a 14-acre site in a small valley, sloping down to the Pincey Brook, and is still open to visitors today, thanks to the Frederick Gibberd Trust. Here, Gibberd created a truly original garden with a unique atmosphere.

Looking at the drawings and photographs in his archive, we can see that Gibberd created a Modernist garden that cleverly weaved together a series of groves, glades, vistas and spaces. His master-plan illustrates that the garden is designed to be seen from a number of carefully planned viewpoints. The variety of spaces often include a feature focus such as a pool, narrow lime walk, pavilion, gazebo, grotto, temple, waterfall and, as the later annotations show, a whimsical log castle.

The elm log castle was designed for his grandchildren, complete with a moat and drawbridge, but it also provided a playful focus for the east vista. Gibberd jokingly described it as:

‘a defence against the neighbourhood village of Sawbridgenorth which is expanding rapidly into the Green Belt – a process called by planners – “Village Infilling”. It is protected by a moat and drawbridge and manned by my grandchildren… it was made, with the help of a JCB and an intelligent driver….the mess was indescribable.’

The various spaces and viewpoints within the garden were also punctuated with sculptures, which Lady Gibberd encouraged Sir Frederick to commission and purchase for the garden (they were both members of the Harlow Art Trust).  Gibberd noted:

‘Any artifact by its nature will attract attention in a natural setting. Sculpture most of all, because it communicated feeling. For that reason we often have trouble finding the site. Failing that, I make a garden to take it. Sometimes a view in the garden seems to demand a work of sculpture. Failing to find the right work, we commission one.’

‘Lucinda’ was one such sculpture, commissioned for a glade in need of a focal point. Made from fibre glass, it is said to have been sculpted from memory by the Dutch sculptor Gerda Rubinstein, of her daughter after she went skinny-dipping in Pincey Brook at the bottom of Gibberd’s garden. Gibberd noted, ‘Her figure is higher than life-size to be in scale with the vista. It was twisted in recognition of the approach at an angle from the two narrow [vista] openings.’

Gibberd spread his love of modern art to his good friend, the leading landscape architect Geoffrey Jellicoe. Noticing the works by Paul Klee and Ben Nicolson on Gibberd’s wall, Jellicoe asked ‘if they meant anything to him in his work’ and, reflecting on Gibberd’s pivotal response, he wrote: ‘I shall always remember his reply – that “they flow electricity into me”, so I broke into this world and have been electrified ever since’.[1] Jellicoe went on to include sculptures by notable modern artists in his garden designs, just like Gibberd.

Gibberd’s garden also included objects he salvaged from various sites. While remodeling Coutts Bank on the Strand, London, Gibberd’s colleagues were dismayed when he asked for some of the columns and fragments to be sent to Harlow: ‘Time would be lost dismantling them rather than smashing them to bits’. It was a very expensive and difficult undertaking: ‘Eventually a huge lorry equipped with a crane drove down my lane, demolished three trees and dumped a pile of huge fragments in a ditch opposite my entrance gates’, Gibberd’s notes explain. These huge fragments became the ‘temple’ on his garden plan, but not without careful consideration of their placement: ‘The temptation was to place the columns as the focus of a vista in the 18th century manner, but being only 22 ft high they would have been lost against the ash trees in the background…the urns (from the parapet) are in Co[a]de stone. I mounted them on blocks from the frieze to increase the scale and give them unity.’ Gibberd’s eye for detail resulted in a balanced and enchanting viewpoint, in harmony with the surroundings.

Gibberd also used recycled materials to create innovative features in his garden, including a waterfall made from well-disguised old fridges! A bust of Queen Victoria is set inside a niche made from flint and recycled bottles. Gibberd explained that ‘the bottles put air into the wall instead of concrete and they reflect the light. The idea was borrowed from Gordon Russell who built an immense retaining wall from wine bottles saved from the Lygon Arms – the family hotel in Broadway’.

Gibberd also championed the use of concrete and his garden was no exception. The paving stones leading down to the pool area were hand-cast by Gibberd himself. He wrote ‘we use a lot of concrete in a variety of mixes. It weathers to interesting textures and colours, providing it is watered with a hose immediately after pouring.’

Gibberd also carefully considered how to link each of the spaces in his garden. He does not take credit for the thatched gazebo (seen at the end of the pool area) built by a previous owner out of sand and gravel dug up on the site, but appreciates John Blackshaw’s ingenuity not just in the design, but in the use of the gazebo to change levels up to the swimming pool.

The gazebo is also cleverly positioned to act as a focal point from the living room. Gibberd explains that ‘The living room has three windows and I placed each for pictures of the garden, and made a garden for each of the windows.’ The largest window has the view straight out across the terrace towards the gazebo.

Adjacent to the gazebo, Gibberd used a large Doulton Lambeth stoneware industrial storage jar to help the process of leading ‘One space … imperceptibly into another’. He explains that ‘Nearby a yew hedge and step link adjacent spaces’.

These are just some of the features in Gibberd’s garden; many more can be seen in the photographs from the archive, and explained through Gibberd’s notes and drawings. They demonstrate how Gibberd used his architectural expertise in the creation of his own garden, carefully considering space, balance, eyeline and views in the placement of each element, much like designing a building. The objects and sculptures helped to enliven the viewpoints and spaces he created, with each space seamlessly linked together. His use of materials, from fridges and recycled bottles to hand-cast concrete, helped to create contrast and interest with the surrounding foliage and features. The result is an enchanting, whimsical garden, which is preserved in Gibberd’s design thanks to the work of the Trust. It is one of very few post-war gardens to be placed on Historic England’s register of Gardens.

All quotes by Sir Frederick Gibberd are taken from his lecture notes titled ‘On Making Gardens and Landscapes’, in his archive at the Garden Museum.