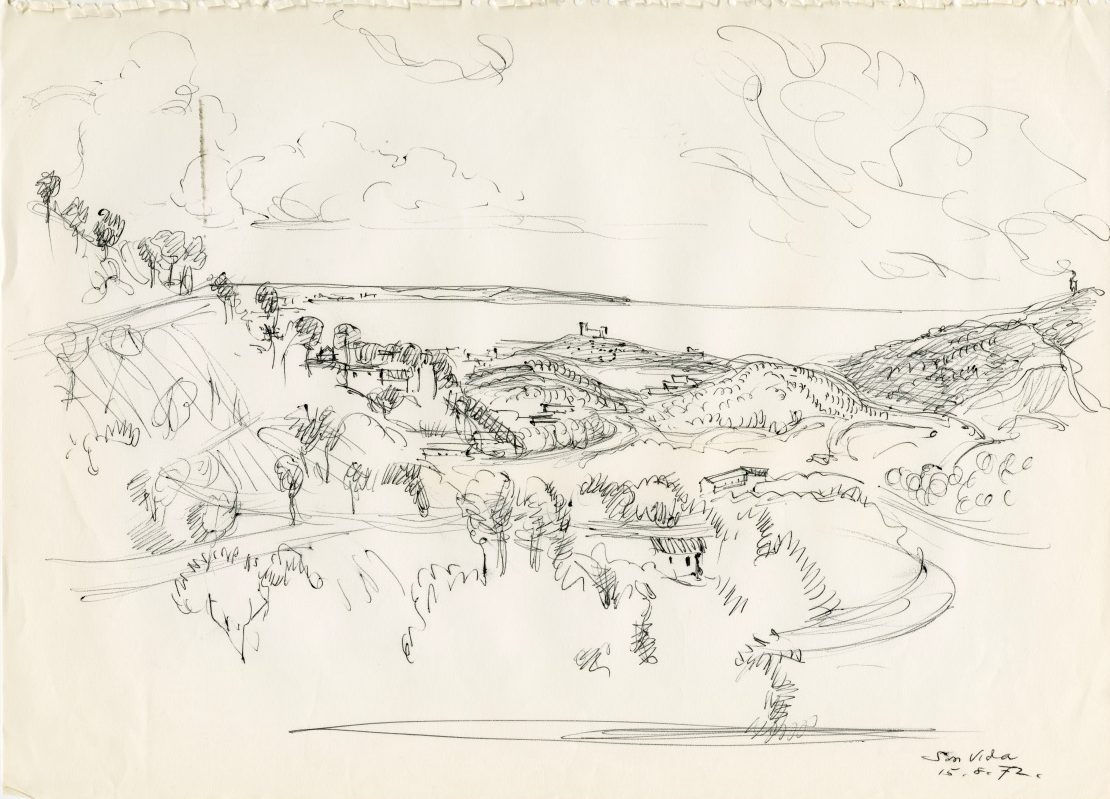 Garden Museum Archivist, Rosie Vizor, writes about her chance encounter with one of landscape designer Russell Page’s clients and friends, Martha Green Doran. Martha adds her insights into the feeling of the property and the character of Russell Page. Trustee, garden designer and writer Tania Compton brings to life the beauty of Page’s design, through her particular expertise in creating Mediterranean gardens.

The plans shown throughout can be viewed larger in the image gallery at the end of the post.

One February day in the Archive, I was supervising two research visitors: one leafing through the first edition of Gerard’s Herbal donated to us by Sir Roy Strong, another working on his thesis on Russell Page’s unpublished manuscripts.

The Archive Study room has a glass wall to the Museum, sometimes I feel like an exhibit!

Today, however, I noticed a couple looking closely at the copies of Museum Journals we have on view and, in particular, at the one titled ‘Russell Page’…

‘I was peering into the study room when I noticed a yellow book by Russell. My heart skipped a beat. Should I or shouldn’t I knock on the door and mention that I knew him and that he had designed a beautiful garden for our family home in Mallorca? I walked away and then came back, I knocked and asked to see the book and Rosie, the Archivist, told me that I could purchase it in the shop. I took a breath and told her that I had known Russell and the story unfolds from there. A very special birthday gift.’

The visitor (and birthday girl) was Martha Green Doran and sure enough when I searched the catalogue, there was Casa Verde – ‘Green House’, designed by Russell Page in the 1970s. Martha was thrilled!

She came back a month later and said ‘I’ve got a present for you this time’, revealing a book her parents had written about their lives: Phyllis and Robert Green: A Memoir (Maine: Camden Writers, 2009). We looked at Page’s plans and photographs together and the story of the garden unfolded.

The Greens made their name in the shoe business in Brockton, Massachusetts, USA, passing the company from father to son for three generations. Martha’s grandfather, Philip, started the company Strathmore, where he worked with his two sons Bob and Jimmy. Inspired by the ‘creative and elegant’ Italian footwear designs, Strathmore focused on imports from Italy. (Green, 27)

Martha’s father, Bob, began to accompany his father on trips to Europe and was mesmerised. He eventually took over the company, which became Verde Shoe. At its height, Verde had over 40 factories in Europe but Spain was Bob and his wife Phyllis’ favourite. (Green, 37)

They decided to build a house in Son Vida, a beautiful mountainous region north of the capital, Palma. The house became more of a ‘tremendous castle’ and the experience of building it was a way of life for many years. (Green, 45)

They brought together a team of experts to work on the house and garden: landscape architect Jamie Caffrey, interior designer Duarte Pinto Coelho, and architect Jose Serrano Suner Polo.

Home during the building works was a small hotel near their site. When it came time to move in, Bob and Phyllis asked their housekeeper at the hotel, Conrada, to move in with her family and work for them. The two families became very close.

After Jamie Caffrey died, the Greens were introduced to Russell Page. At the time, he was creating a monumental sculpture garden in Cala Ratjada, Mallorca, for the banker Bartolomé March. Page agreed to design the Greens’ garden.

Martha’s parents became good friends with Russell, she remembers many dinners together in London and Mallorca. Bob described Russell as ‘a very intellectual, interesting figure and fun to be with. […] Russell was fond of saying, “there is one thing you cannot change [about gardens] and that is the owner”’. (Green, 47)

‘He saw the whole, everything as connected, in harmony’

‘He had a very calm manner, was very kind, knew what he wanted and had a vision. He was connected to the earth – centred and grounded. He saw the whole, everything as connected, in harmony. This was linked to his spirituality and it came through in his design – unity in design. He was a charming man. It was rocky terrain and planting was difficult, but wherever possible Russell created beauty. I remember lots of pots that needed watering!’ Martha Green Doran

This philosophy is evident in his garden for Casa Verde, where he blended the design and the chosen plants for the garden with the house and the surrounding landscape. He made the most of the view and created a garden that was both beautiful and useful to the family, with cutting gardens, salad gardens, private shady terraces and sunny open expanses.

The property was situated on the side of a mountain looking out towards the sea. The mountain was originally covered in tall pine trees but many were cleared to make way for the houses. At the time, theirs was one of the only properties on the mountain but many more were built over the years. 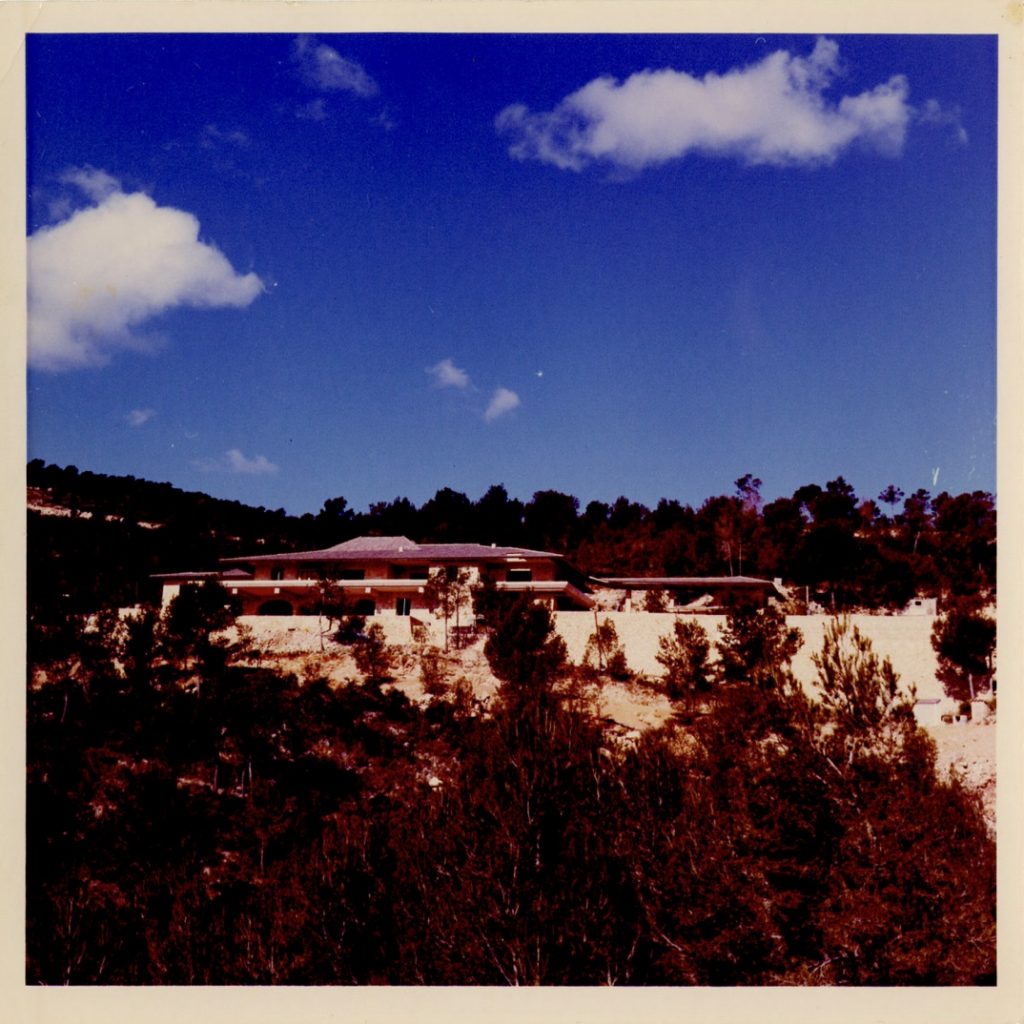 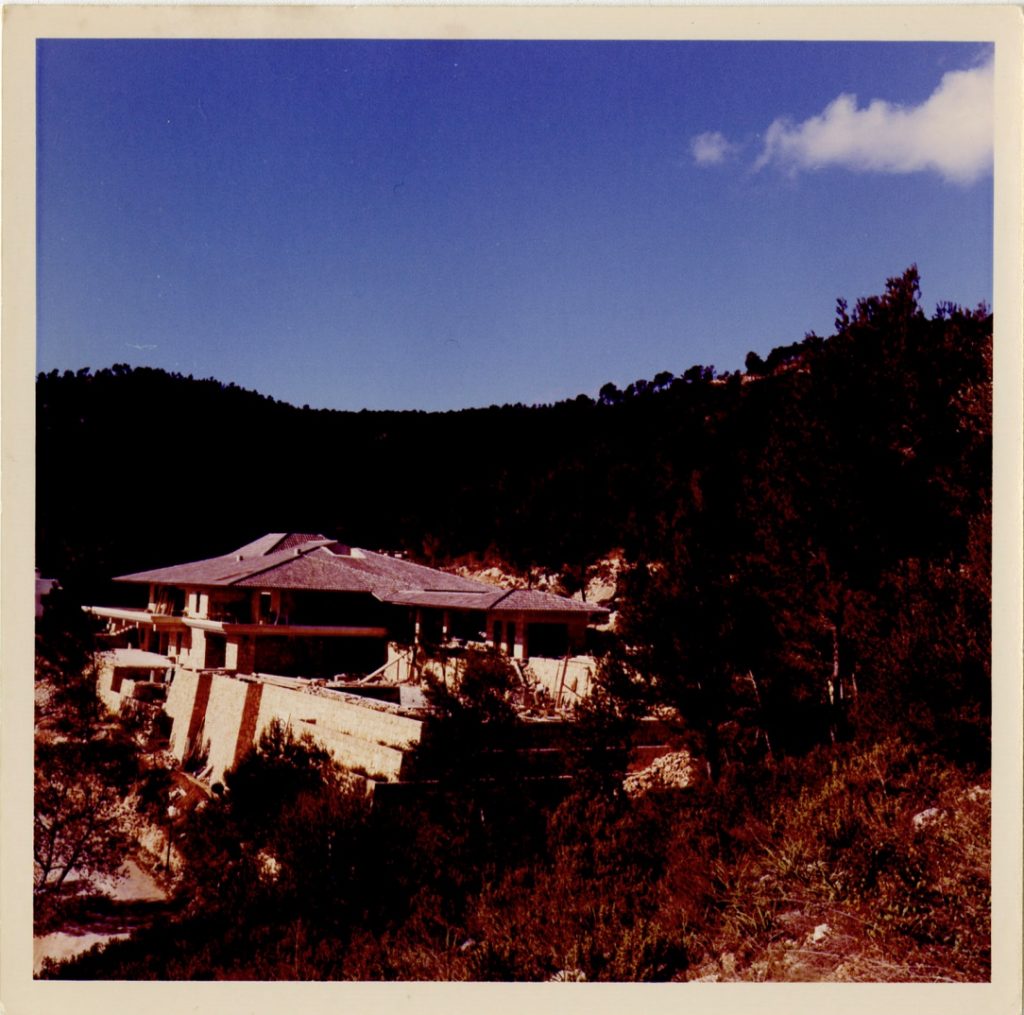 The view out from the terrace was spectacular and even inspired Russell Page to make a sketch while he was there. 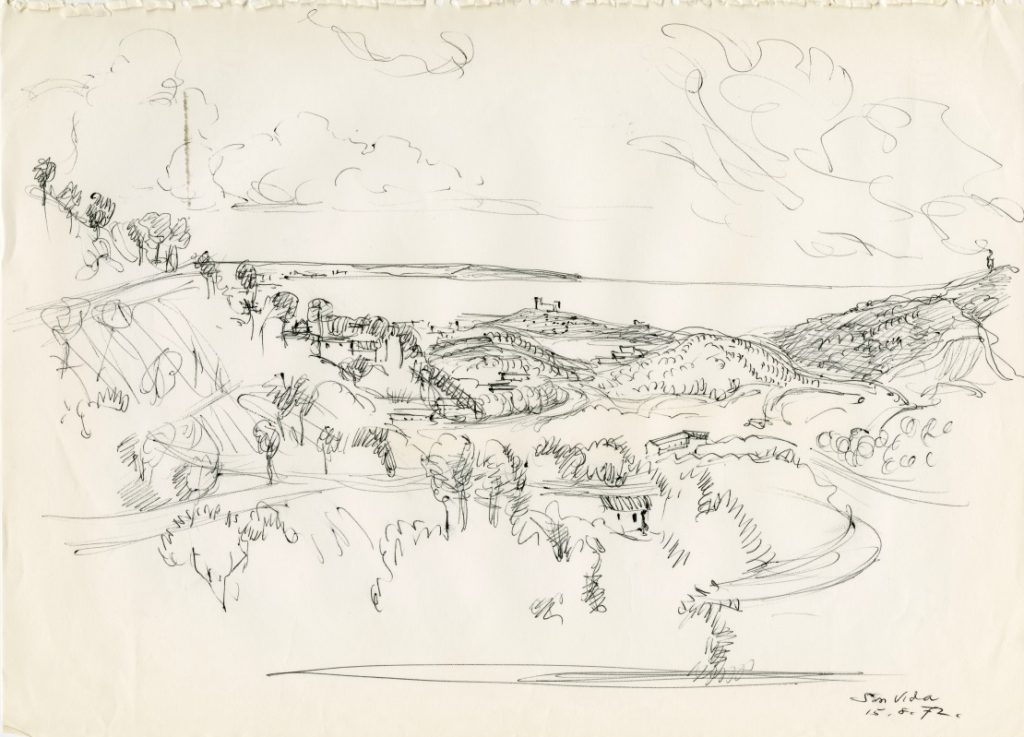 ‘The flowing panorama that Russell Page portrays in this bird’s eye sketch tells you so much about the influence of the landscape in his decision to keep the tree planting native and in harmony with any view of Casa Verde from afar. He lists on sketch RP/1/12/1/1, 25 Pinus halepensis (to match the Aleppo pines growing out of the rocks all around and up on the skyline behind the house), 25 Madrona (probably the European Arbutus andrachne rather than the American A. menziesii usually called Madrona) and 50 Viburnum tinus. To the rosemary that would be covering the landscape and filling the air with the pungent scent of the garrigue, he added 500 more.’ Tania Compton 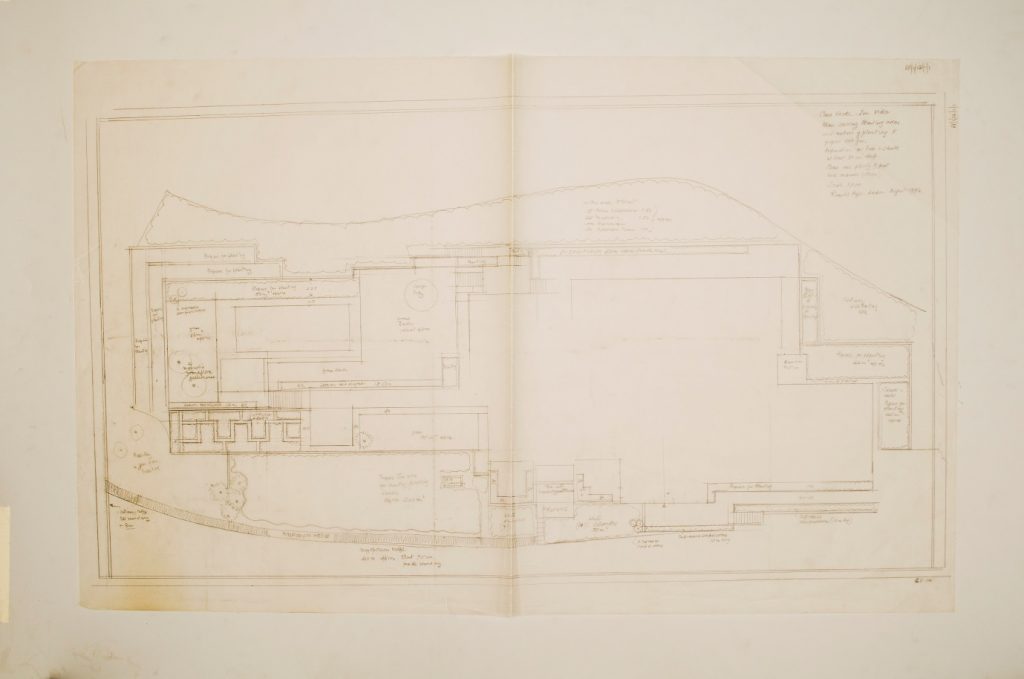 There was a sweeping drive that curved round the side of the house up the hill.

‘You would enter the house through the back, through very old, large wooden antique doors, which I believe came from Portugal. When you entered the house there was a Roman style courtyard open to the sky, with trees and plants in pots, and you could see through glass doors which led into the house with the view of the sea in the distance.’ Martha Green Doran 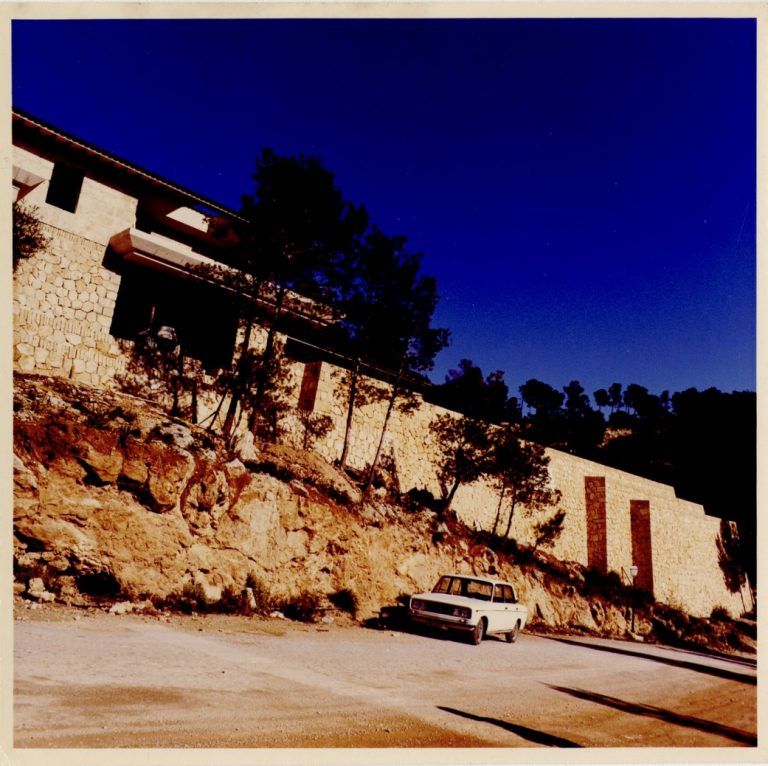 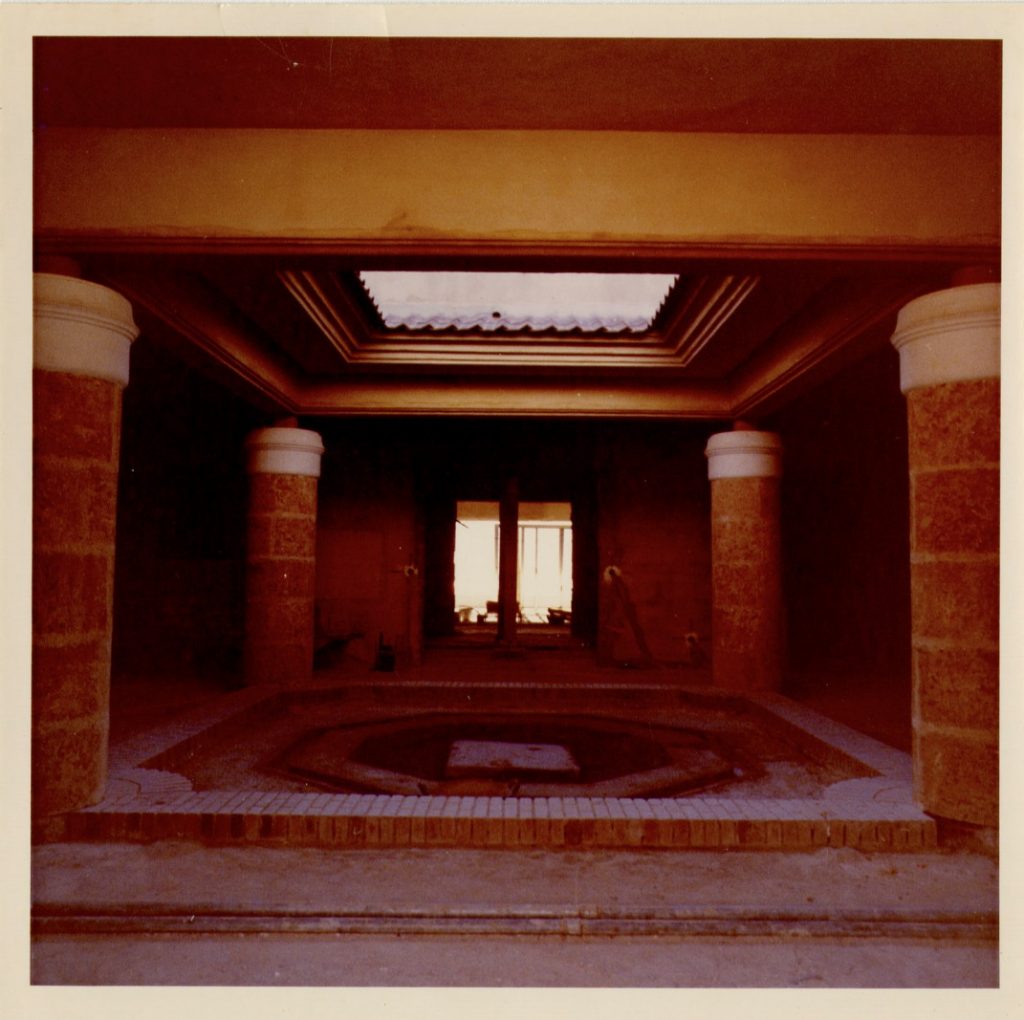 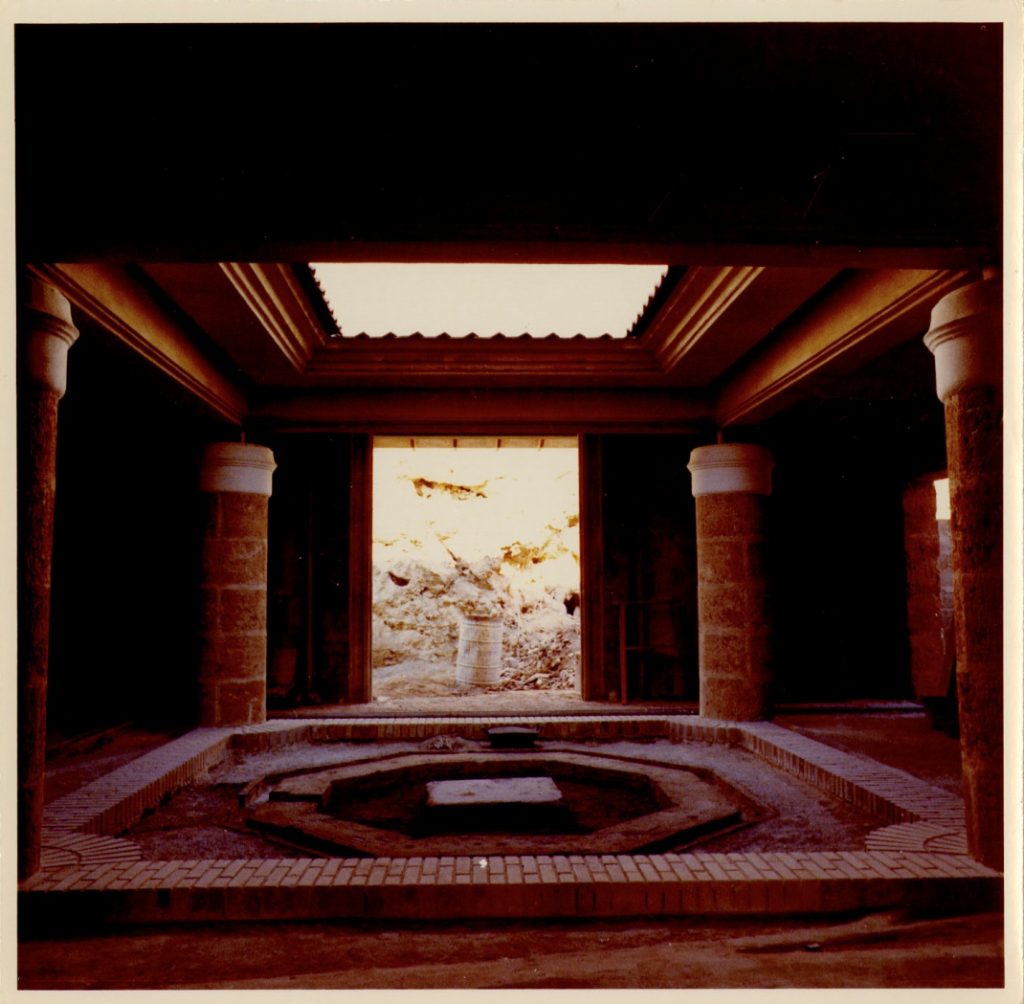 There were large sun-soaked terraces at the front of the house from which to enjoy the view and each of the four bedrooms had an outside area. The lower level of the house had a bedroom with an ensuite and open air dining area. 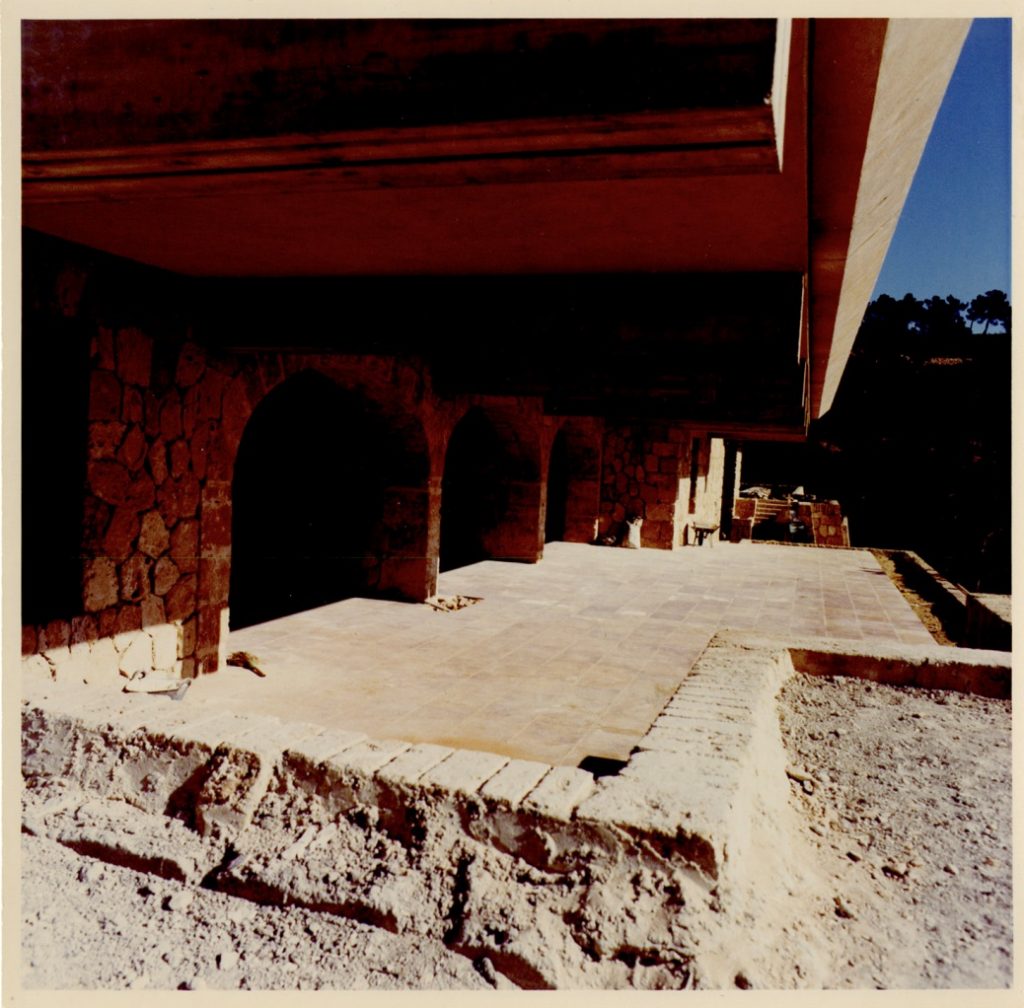 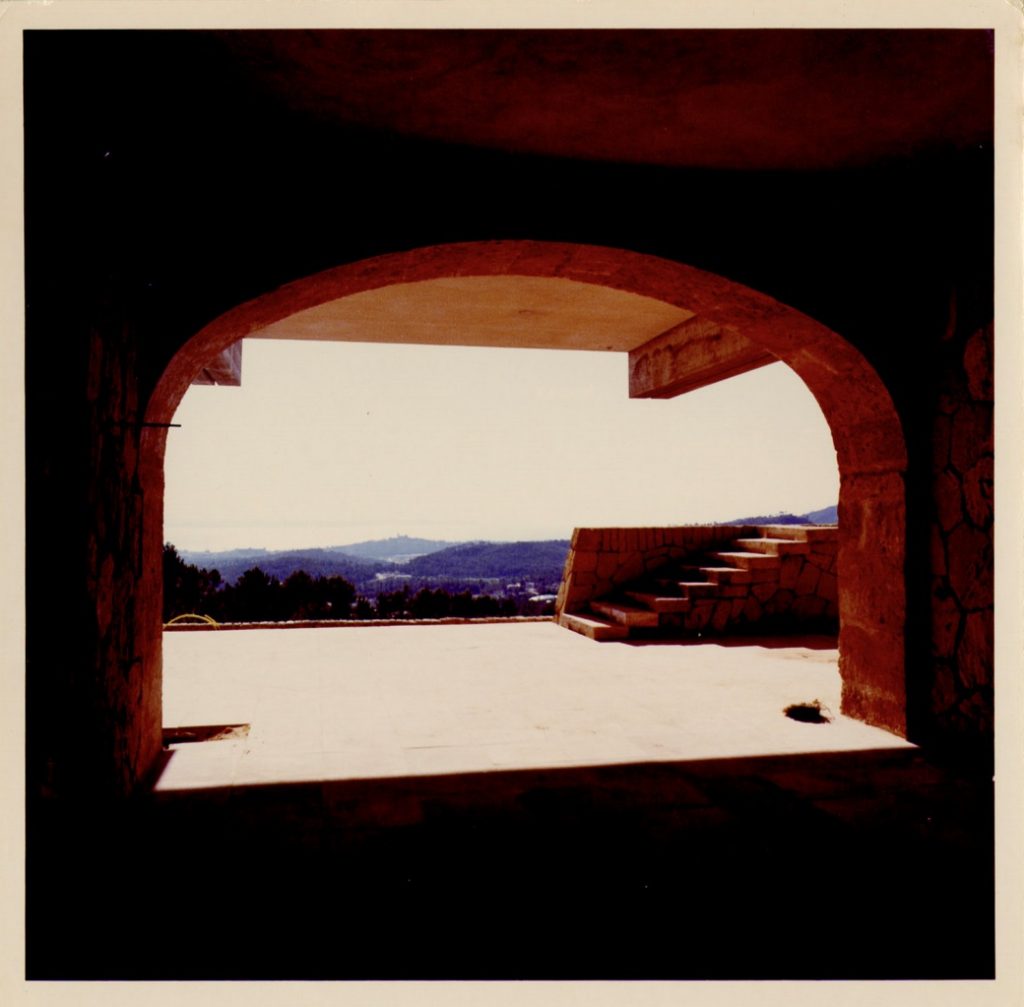 Russell Page’s work is most evident in the garden surrounding the swimming pool, with steps leading up to the changing rooms. He made this quick sketch, probably on an initial visit, which he then worked up back in London. 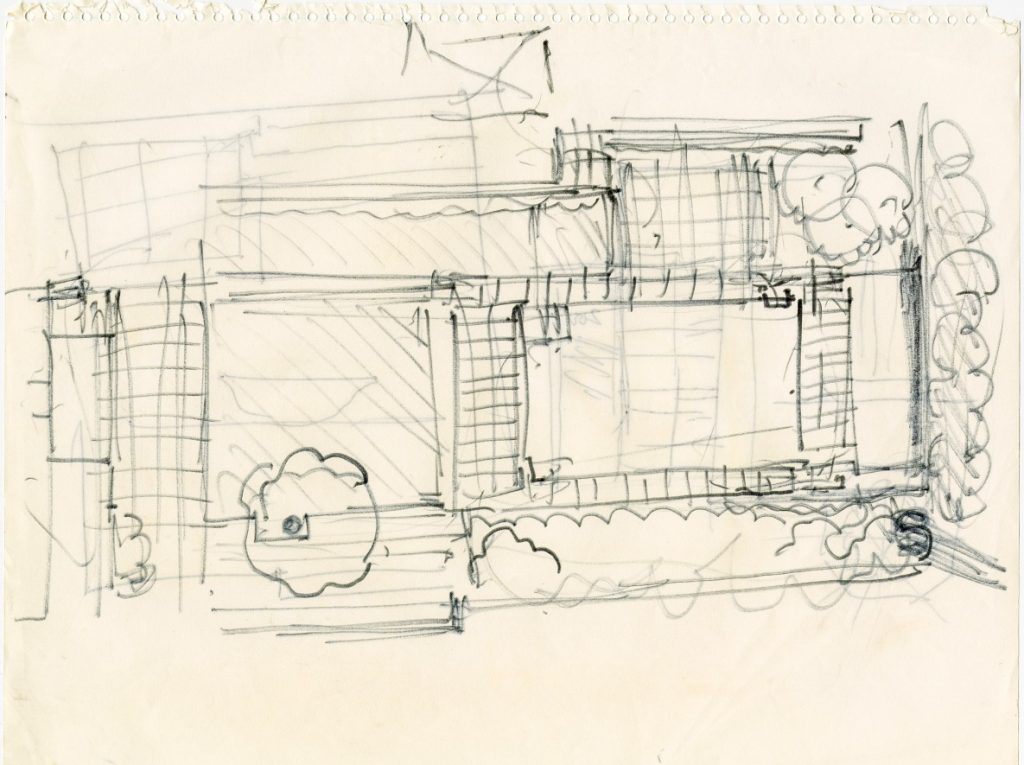 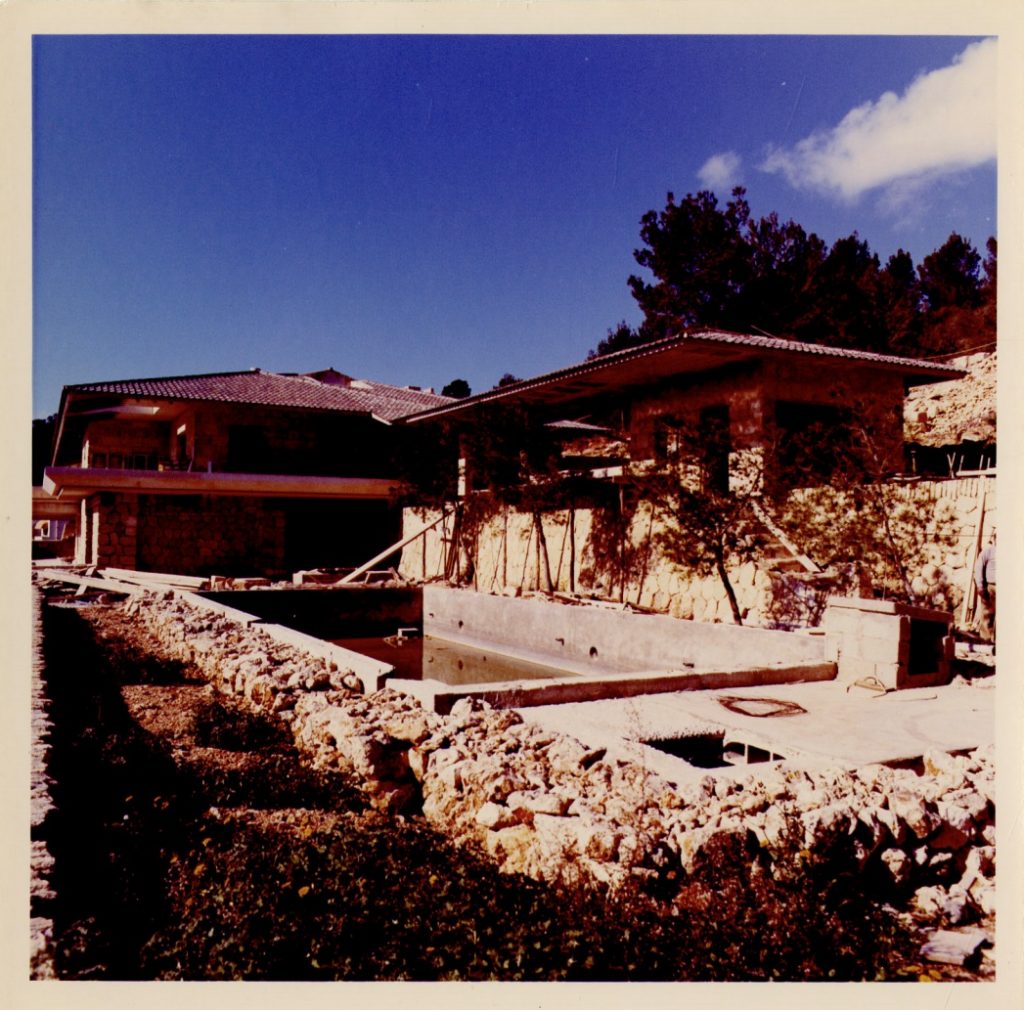 In Page’s design, the pool was to be flanked at either end by lawns featuring Magnolia grandiflora ‘Galissoniensis’ trees. Espaliered lemon trees were to be planted against the walls leading up to the changing rooms. Beds were to be prepared for planting on the slope towards the sea, with a cutting garden further back.

‘The instinct and immediacy of his original sketch in a ring-binder notebook is almost unchanged when he gets home to work up into a plan in August 1972 (RP/1/12/1/6), just one unresolved area where he questions “paving, grass or plants?” to run along in front of the espaliered lemons, a neat solution for a hot stone wall and narrowest of beds in a tight space.’ Tania Compton

The beds for planting are shown here. Bob and Phyllis owned some of the land to the side of the house, middle right in the photo. The cliff side and tall trees in the rear of the photo were not part of the property. A road ran here between the cliff and the property at the rear.

The beds for planting are shown here. 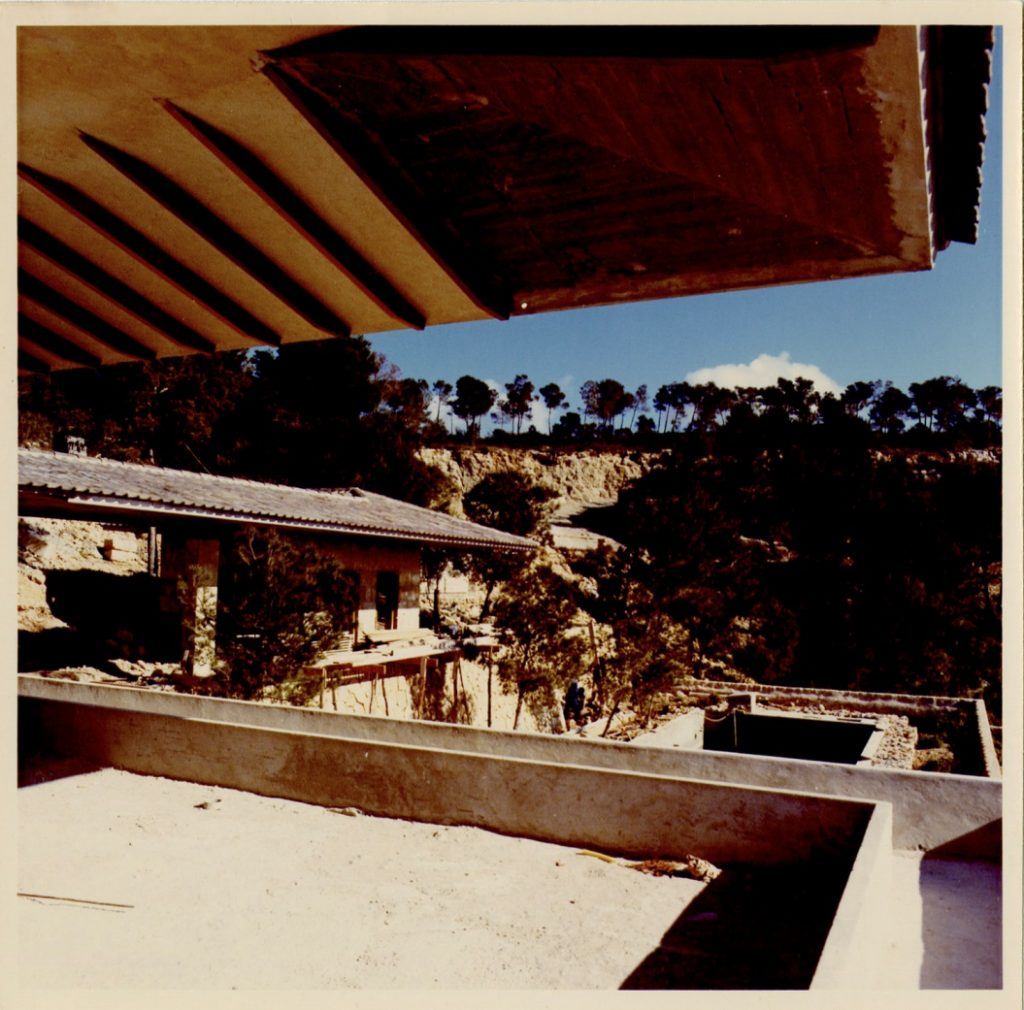 This plan shows the drop from the land at the back of the house to the level of the house, where cypress trees and shrubs were to be planted. 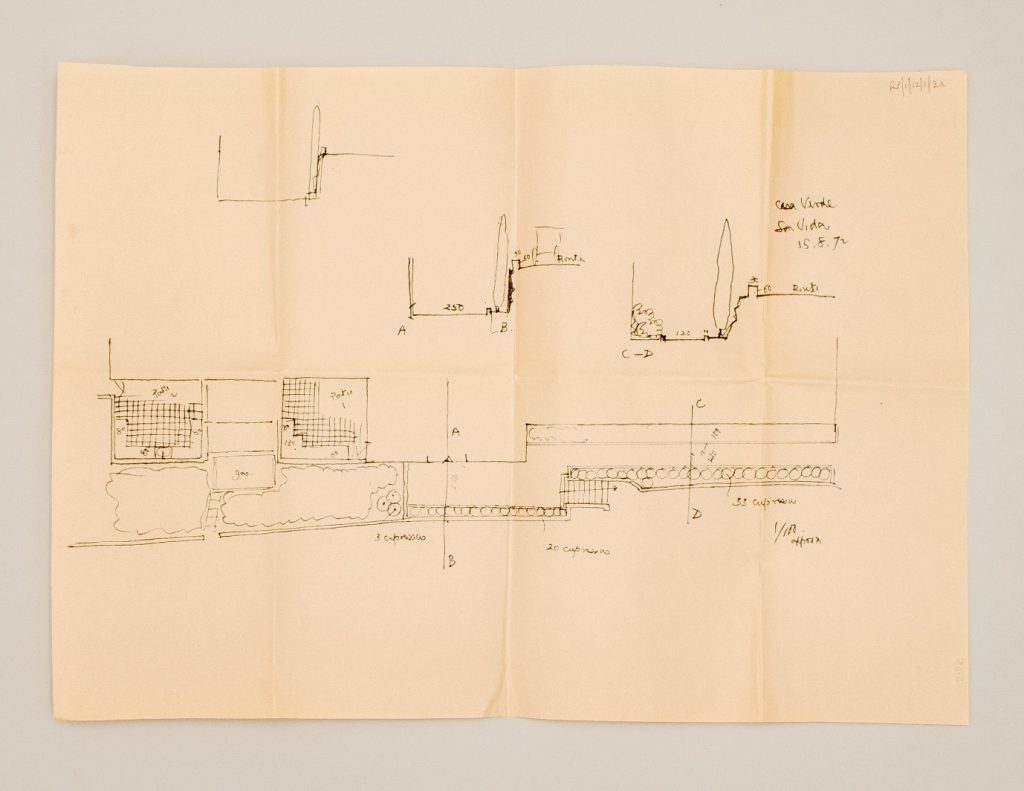 ‘Page mitigates the abundance of walling wherever he can, draping the bastion wall in a curtain of plumbago and concealing exposed rock behind the house with a screen of cypress. For two long hedges Page uses Pittosporum (presumably tenuifolium) and Myosporum (laetum?), both from New Zealand and no longer top of any designer’s plant list today but Page was lucky to find Uli El Jardinero with his charming woodcut logo and strapline “Nuestros plantas para Usted”.’ Tania Compton

There weren’t many nurseries on the island at the time, Russell may have sourced some plants from Mallorca but the majority must have come from the mainland. This Uli El Jardinero plant catalogue was kept in the archive. 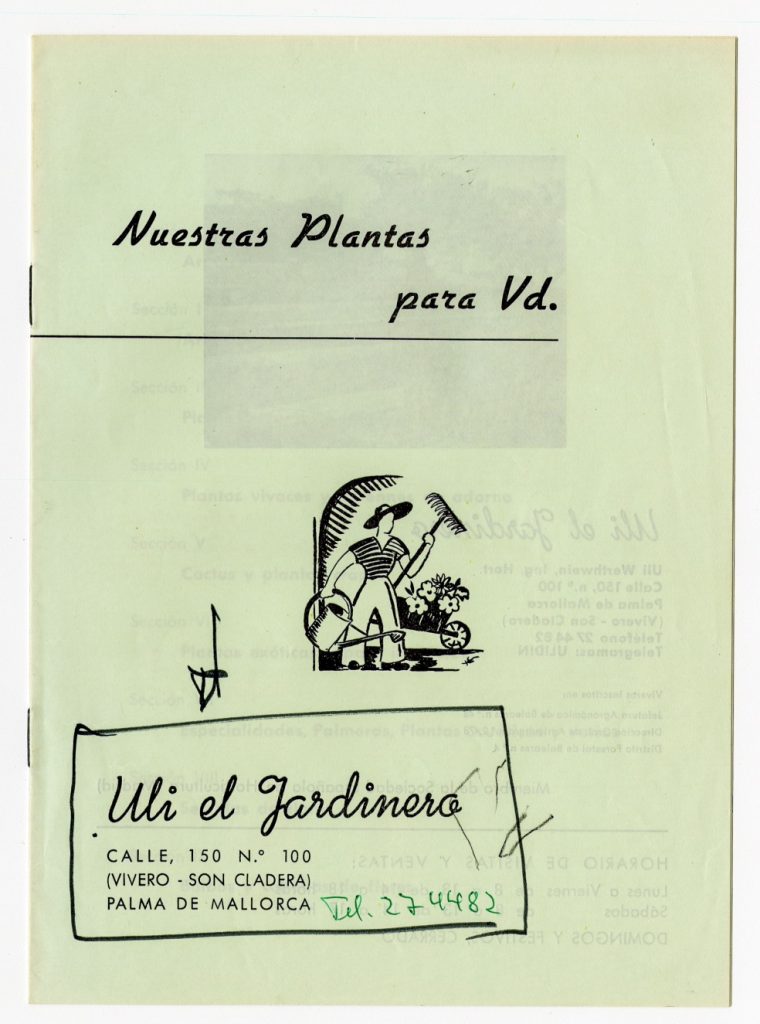 This plan shows the dimensions and access routes to the cutting garden in more detail.

‘The cutting garden has a Page-ian flourish in the ornate but practical design of the paving around the beds, scaled up at 1:50 he also asks for the retaining wall to jut out in both English and French “for access to cutting garden wall must be set back”, “à reculer le mur pour donner accés au jardin de fleurs”. It would be wonderful to know if his wishes were heeded, and who it was on the team who needed to see his requests in French. There is also an intriguing mention of a “grotte verte” on the plan where he is specifying taps, of which there would have had to be many as there was quite a lot of grass to keep green in Casa Verde.’ Tania Compton

Indeed, this plan shows the many water points surrounding the house, giving an indication of the level of planning required for Page’s garden design in this warm climate.

From a ‘Tremendous Castle’ to ‘Black Hole’

The Greens lived a glamorous life in Mallorca, full of parties and interesting people but unfortunately, as Bob explained, things changed…

‘In 1975, about a year before the building project was complete, Franco died and all the workers went on strike. All of a sudden, what had been intended as a modest expenditure for a gorgeous stone house in Spain became a black hole. Craftsmanship, labour – everything was suddenly very expensive. […] Bob decided to finish the house the right way, then sell it.’ (Green, 49)

Martha remembers her father recollecting that the worst part of selling the house was saying goodbye to Conrada.  However, Conrada came to work for the family again when the Greens bought a small apartment on the sea at Illetas, Mallorca. We’re lucky that the archive preserves the memory of a happy collaboration.

‘It was as if my parents and Russell were there at the Garden Museum with me on the 6th of February. I’m very grateful to Rosie and the Garden Museum for helping me revisit this very special home and garden.’ Martha Green Doran 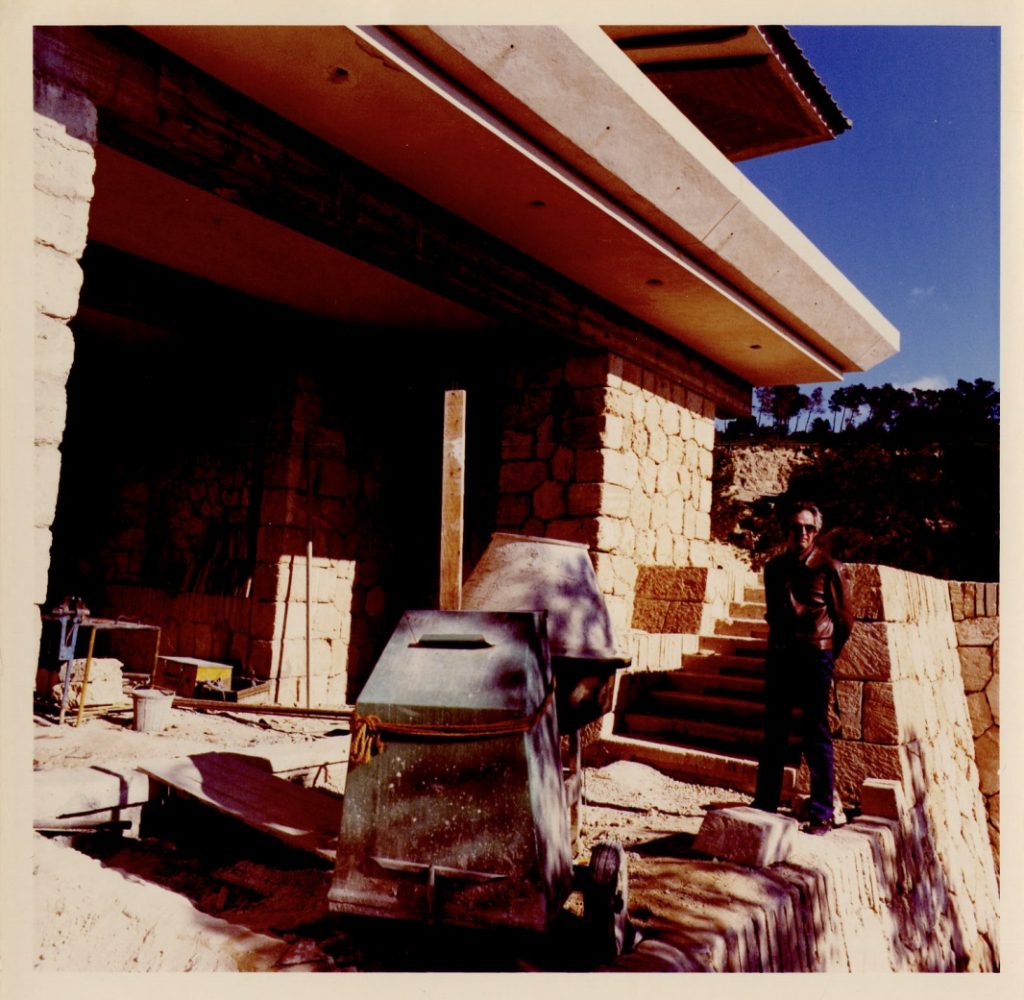 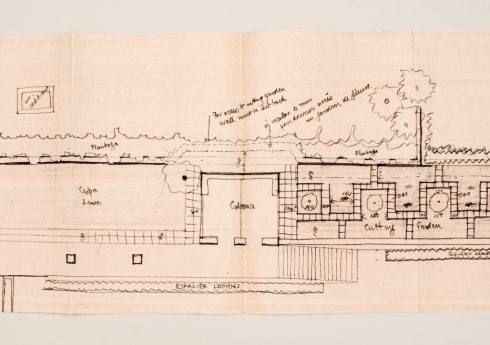 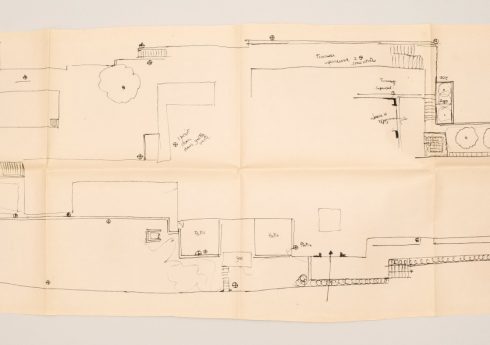 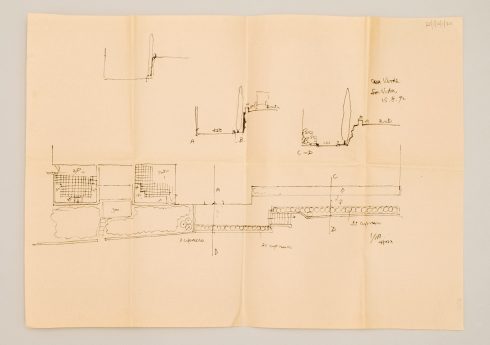 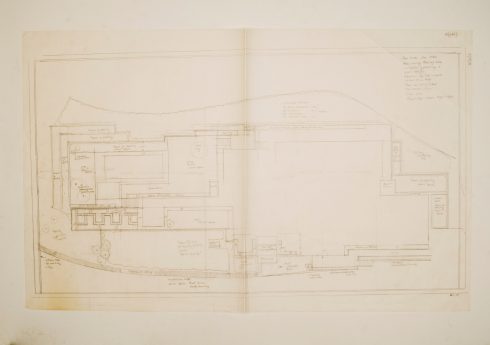 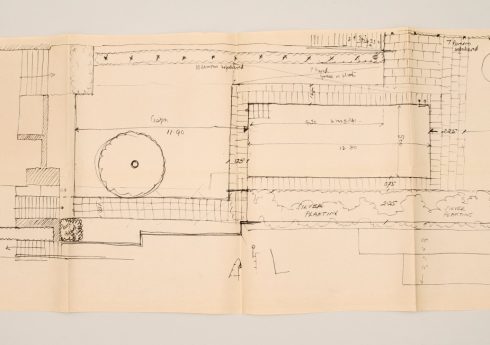 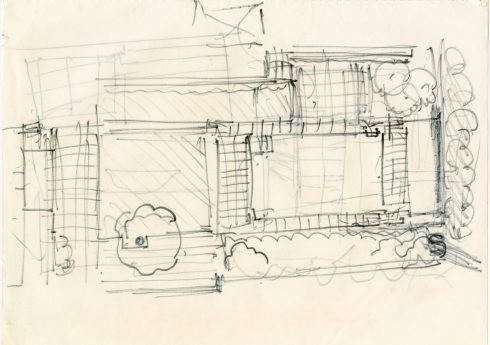 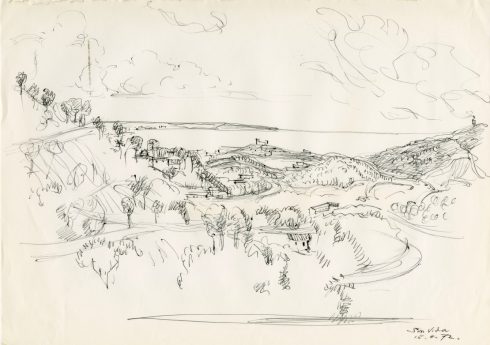