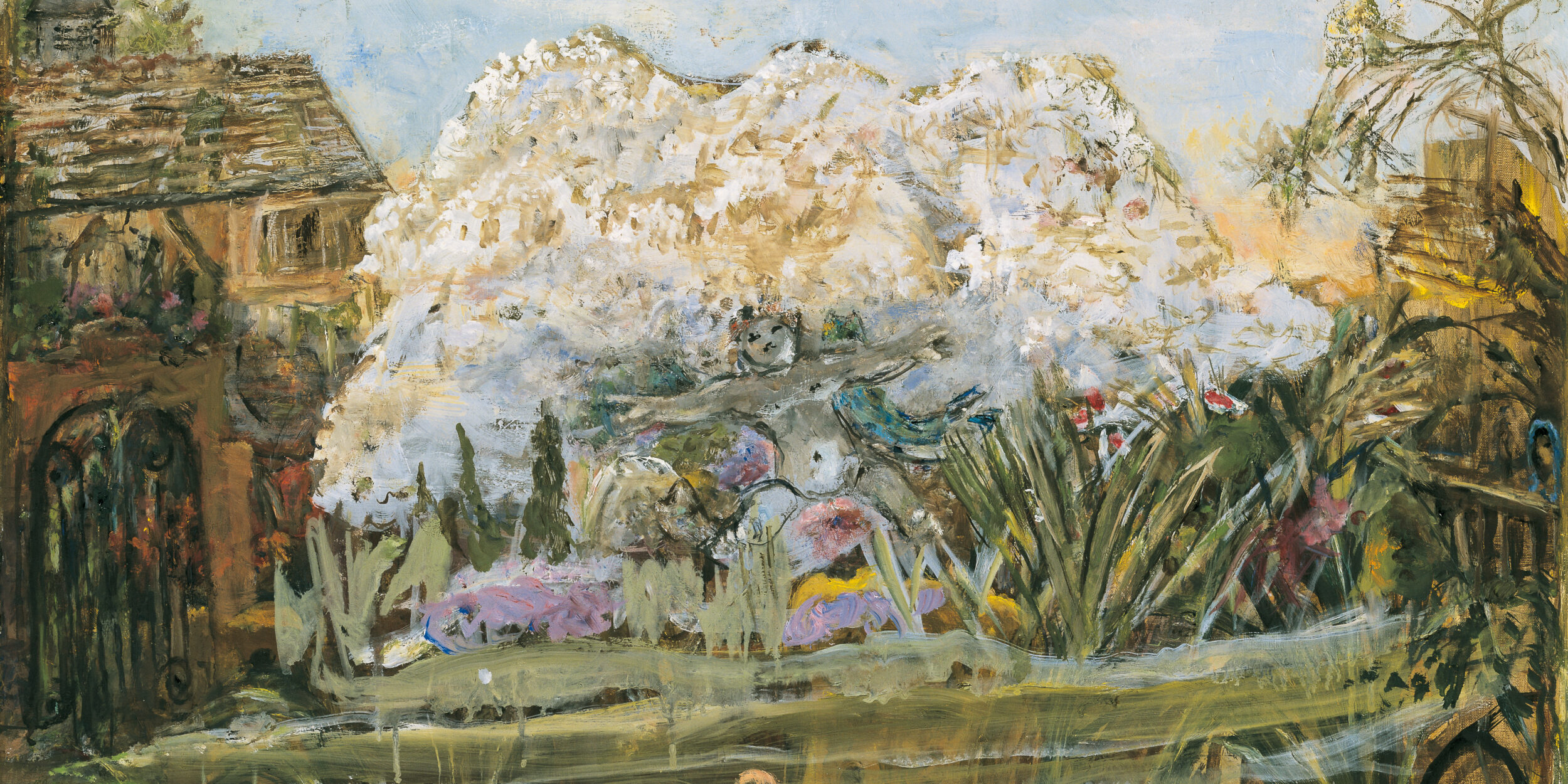 As we head towards Christmas at the Museum I’m spending my weekends dashing about buying gifts and thinking of ways I can celebrate with loved ones even when I might not be able to see them. This year especially gifts and gifting has been incredibly important to the Museum, in addition to the many donations which have enabled the Museum to survive one of our most challenging years we’ve had some treats of gifts to the collection.

Our Derek Jarman exhibition has been one of the highlights of my career and throughout its organisation and the development of the accompanying events programme and online exhibition, I’ve been conscious of how terribly generous people are with giving their time, their expertise and of course generously letting the paintings and drawings they own leave their walls for months so that we can include them in our shows.

Each year the Museum’s collection continues to grow through a number of strategic purchases and gifts. The collection is developed to add to our understanding of the history of gardening and garden design and is developed within the scope of our collecting policy. This year gifts have been especially important to the collection’s growth.

In the spring the Marie-Louise von Motesiczky Charitable Trust presented Marie-Louise von Motesiczky (1906-1996), ‘Golders Hill Park’, 1981, to the collection. Born in Vienna, Motesiczky attended art classes in her native Vienna and Paris. In Berlin she was trained by the German Expressionist Max Beckmann. When in 1938 Austria was annexed into the Third Reich, she left Vienna with her mother and travelled to England via Holland. After the war she moved to London, eventually buying a house in Hampstead. Her aging mother joined her shortly afterwards and together they developed a garden.

Caring for her mother and embracing their deepening relationship, her mother became her muse together with the garden they enjoyed together. After the death of her mother in 1971, Motesiczky painted a number of pictures of Golders Hill Park, situated a short distance from her house on the edge of Hampstead and Golders Green. In this work she has assembled into a single view disparate elements from the park including magnolia trees, fountain and the little tower and gate to the formal gardens, whilst the flamingos in the foreground have been removed from their enclosures.

Author, artist and illustrator Susan Campbell (b.1931) pioneered research into the history of the kitchen garden. Her richly illustrated book for which she produced drawings tracing the history of kitchen gardening from the Greek and Roman roots to the present day. Her book provided an insight into the skills and horticultural secrets of the past, by examining the development of the walled kitchen garden – its structure, layout and planting – through the imaginary yet typical English country estate, Charleston Kedding. Susan Campbell has kindly donated the original illustrations for ‘A History of Kitchen Gardening’ to the collection.

This summer the Museum was delighted to add Edward Bawden (1903-1989), ‘Covent Garden Flower Market’, lithograph on paper. The work was transferred from the Derbyshire Schools Library Service by Buxton Museum & Art Gallery to the Museum’s collection.

Edward Bawden CBE (1903-1989) attended The Royal College of Art School of Design (1922-1925). Here he met fellow student and future collaborator Eric Ravilious. He lived with his wife, Charlotte, at Great Bardfield, Essex and was an important member, along with Ravilious, of the Great Bardfield Group of artists. This print comprised part of the series ‘Six London Markets’, which date from 1967. Bawden captured the market stall holders arranging boxes of flowers and foliage beneath the ironwork canopy of the market in Covent Garden. As the market moved to a new home in 1974 this work provides a valuable record of the market’s earlier location.

In July a unique series of designs by Humphry Repton for Norman Court came up at auction at Bonhams, London. The estate was purchased by to Charles Wall and his wife Harriet Baring in the early 1800s and they commissioned watercolour designs from Repton for alterations to the landscape. Charles Wall died in 1815 and these plans were never implemented. Comprised as single folio designs they were not assembled into a Red Book as is perhaps traditionally associated with Repton’s design work. ‘The North East View of Norman Court’ is a fine example of one of Repton’s late landscape designs. It incorporates his innovative flap which allowed clients to contrast the current landscape with perceived future improvements.

The watercolour depicts the existing house with two fine trees cutting across its frontage. A property consisting of a modest central block with courtyards on north east and north west corners, together with stables and a coach house. Repton populated his view with characters. In the first a workman is using an axe to chop wood, whilst another has abandoned his axe and sits talking to a finely dressed man. This is a utilitarian scene of an estate managed without elegance or sophistication, and a fine example of Repton’s use of social commentary through his watercolours.

In the reveal a new house of classical design in light stonework is added offering a new modern living arrangement. It is illustrated together with a long sweeping drive that elongates the view that is now framed by the fine, mature trees. The view offers a landscape that is refined and stylish. Driving this home a sophisticated group of visitors now stand and admire the house whilst others populate ‘The Approach’.

The Museum does not have a budget for acquisitions and this year has concentrated its fund-raising on survival. This watercolour was acquired for £14,00 with grants from two charities for this specific purpose, the Art Fund and The ACE/V&A Purchase Grant Fund, supported by a legacy a Friend of the Museum gave towards acquiring works of art. Both funding bodies have been instrumental in the past in helping the museum acquire important works and their support together with the Museum’s supporters is incredibly important in helping the museum develop its collection. 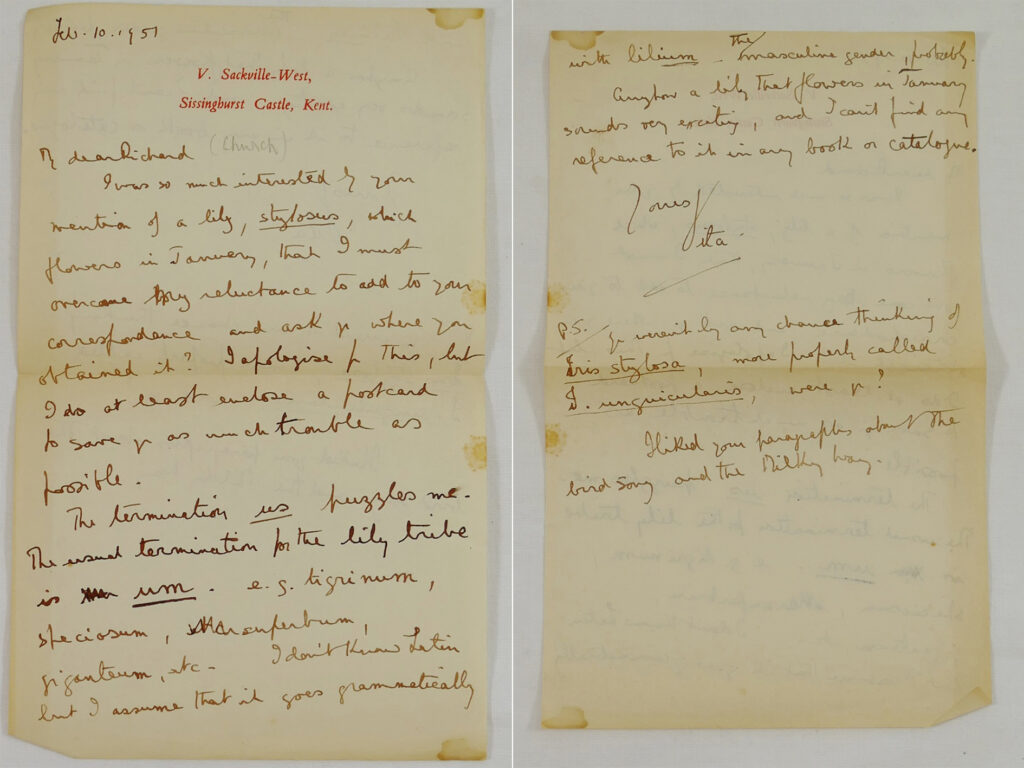 This autumn the Museum’s curatorial volunteer alerted me to a collection of material relating to Richard Church an English author and poet coming up at auction. A friend of Vita Sackville-West amongst the collection was a letter dated 1951 from Vita to Richard Church, discussing a rare variety of lily and where it might be procured, with a note of praise for pieces of Richard Church’s literary work. After his marriage to his third wife Dorothy Beale in 1967, Church moved to Sissinghurst and lived in the Priest house.

The letter subsequently sold for far more than we could afford, so you can imagine how happy we were when the buyer offered to donate it to the Museum. This incredible act of generosity will provide us with insight into one of Vita Sackville-West’s literary and gardening friendships.