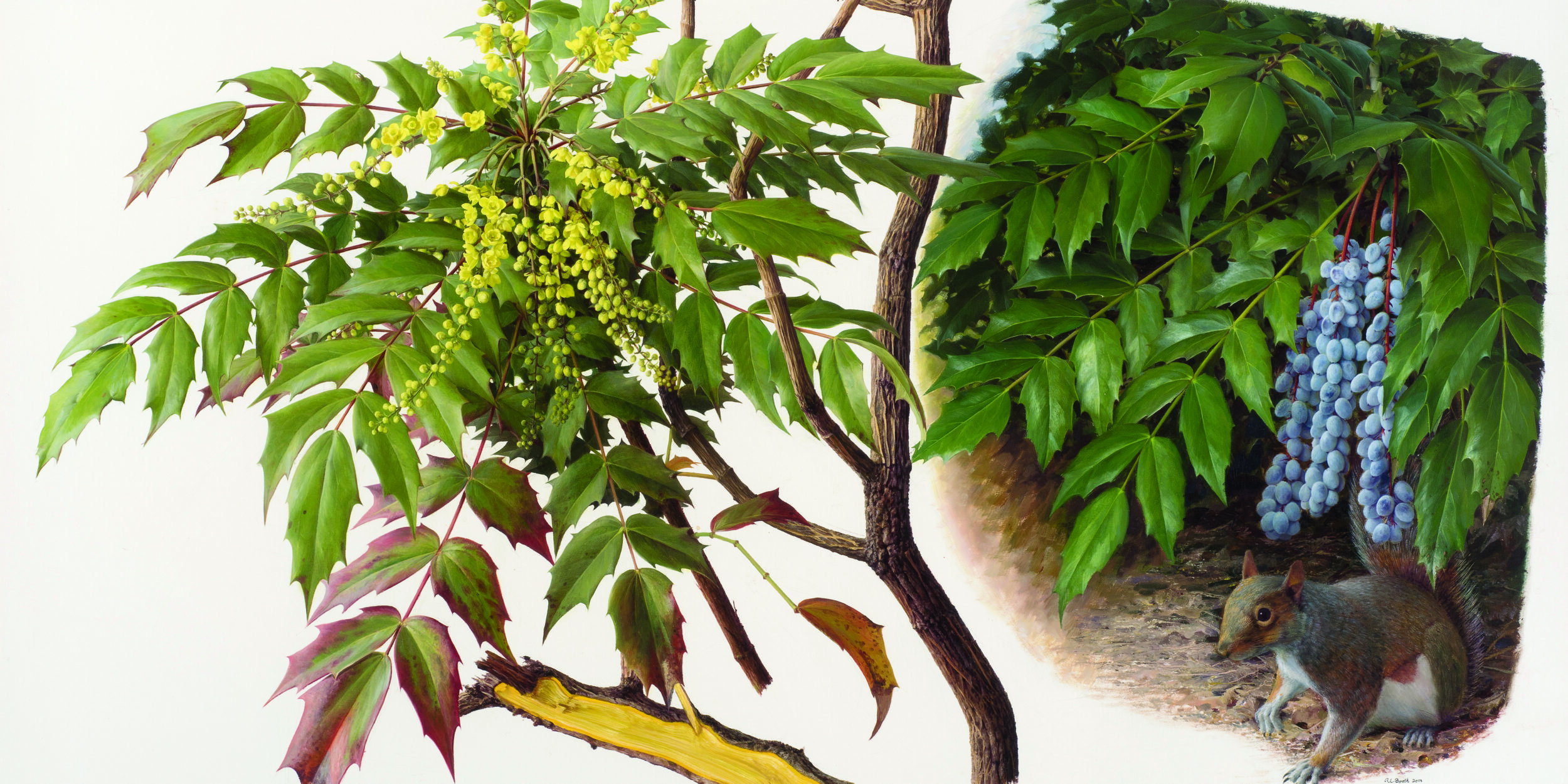 By Peyton Skipwith, guest curator of The Botanical World of Raymond Booth

Although the exhibition The Botanical World of Raymond Booth is, as its title implies, concerned with his botanising and the scrupulously accurate studies of the plants he grew at his home on the outskirts of Leeds, two works – Woodland with Collard Doves and Mahonia Japonica – indicate his equal interest in the study of the birds and animals he observed both in Adel Woods and on the long walks he took through the Yorkshire countryside.

As a young man in the 1950s he would walk for days at a time, sleeping rough. In An Artist’s Garden, the book I wrote about him twenty years ago I quote him verbatim:

“I slept out in any bit of woodland or slight shelter I happened to be near when night fell! Very disreputable, but so interesting to be outside all the time. I used to get disturbed by prowling foxes – and tiny mice scurrying about among the leaves: it is surprising to find that so much activity goes on at night amongst the wildlife.”

He had total empathy with these creatures and would never harm any living animal, even the squirrels that invaded the bird-feeder in his garden were carefully captured and carried back into the wood to be released.

However the scientist and naturalist in Raymond encouraged him to pursue his studies of the bird and animal life of the region with the same diligence he applied to plants, and on his rambles if he came across recently dead specimens in perfect condition, he would carry them back to his painting room, articulate them and make the type of detailed studies contained in this selection.

Also, those among his contacts – naturalists, plantsmen and others – who knew of his interest would send him specimens, such as the plant breeder in Haslemere who couriered a full-grown roe deer; and an unknown admirer in Wales who sent him a buzzard by post. On one occasion the keeper of the Natural History Museum in Leeds gave him the carcass of a full grown badger, which he carried home in a sack over his shoulder – a six and a half mile walk. No mean feat.

The studies that he made from these specimens were his reference library and although he released some for sale in the various exhibitions of his work that I organised, others he would retain for years before incorporating the appropriate bird or animal into one of his set piece paintings, based on the observations he made sitting quietly on a fallen tree in Adel Woods; rambling over the countryside, or even some corner of his own garden.

Raymond’s wholehearted commitment to the natural world is reflected in his will in which he bequeathed his entire estate to the Royal Society for the Protection of Birds, the Woodland Trust and Plantlife International, each of which will benefit from sales at the Garden Museum.

The Botanical World of Raymond Booth is open until 6 February: book a visit