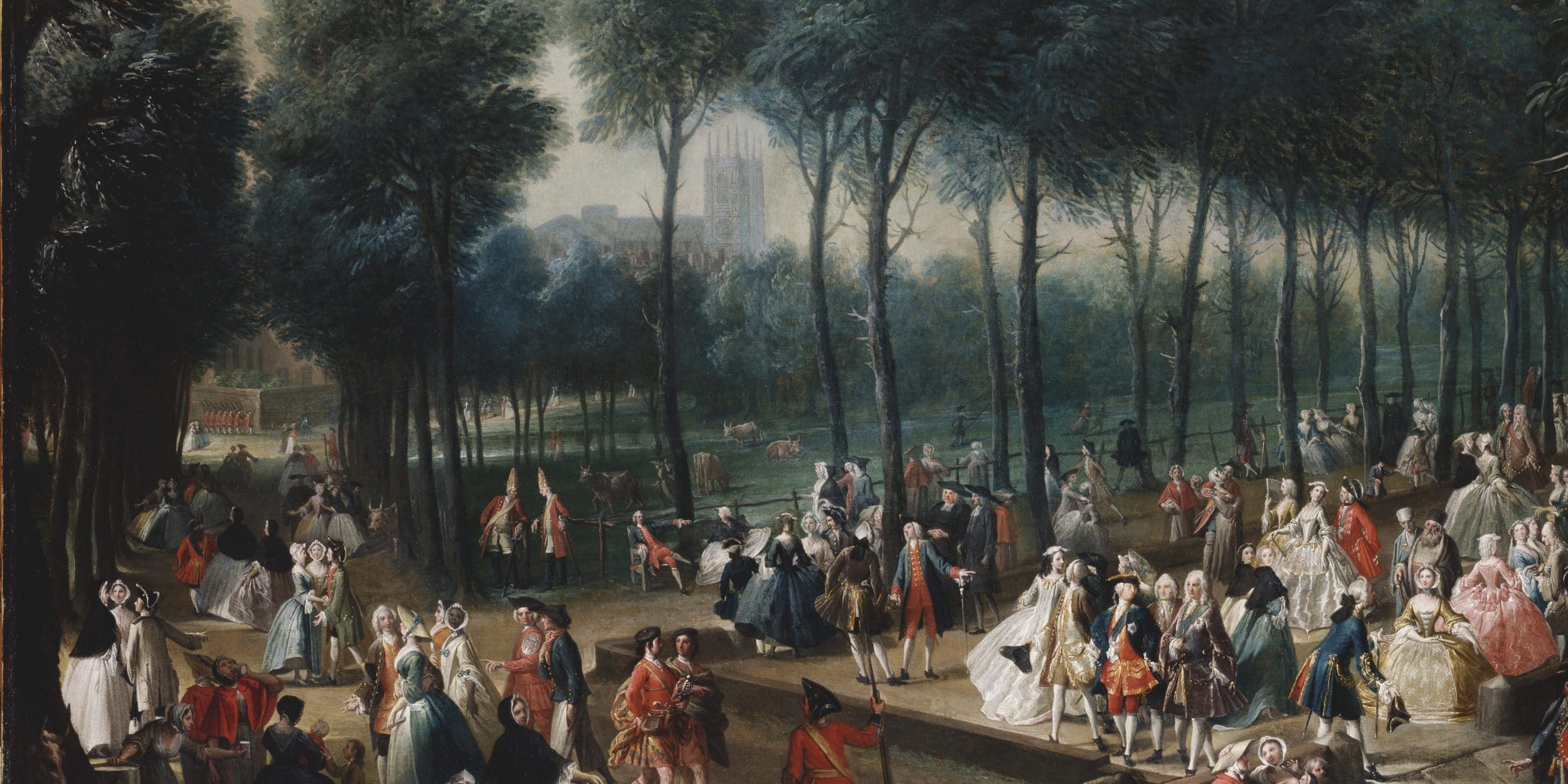 Home » Play, Protest and Pelicans: Five Stories to be Discovered in our Royal Parks Exhibition

Play, Protest and Pelicans: Five Stories to be Discovered in our Royal Parks Exhibition

Our new exhibition Play, Protest and Pelicans: A People’s History of London’s Royal Parks delves into the weird and wonderful history of London’s green spaces, through photos, artworks and artefacts from The Hearsum Collection, which collects and preserves objects relating to the unique 400 year heritage of the Royal Parks.

In this blog, Hearsum Collection curator Sue Barber has picked her five favourite objects in the exhibition, revealing the surprising stories behind them:

Document regarding increasing the deer stock in Hyde Park, 1699

My first choice is a document signed by William III at Kensington Palace in 1699. As well as being one of the oldest items in The Hearsum Collection, it represents the two key factors that unite all of London’s Royal Parks – deer and the monarchy. Henry VIII created Hyde Park, St James’s Park and Regent’s Park to indulge his love of hunting, and also introduced deer to Bushy and Greenwich Parks. Richmond Park was enclosed by Charles I and Green Park by Charles II. All of these private hunting grounds have gradually been made accessible to the public and are now available for all to enjoy. The deer, however, remain the property of the sovereign.

Richmond Park is enclosed within 8 miles of brick wall, completed in 1637 but repaired many times during its long history. The wall was designed to keep the deer in but has also, at times, been used to keep people out. By the middle of the 18th century, public access was severely restricted. The ladderstiles that were used by pedestrians to climb over the wall had been removed and only those with a specially-issued token were allowed to enter through the gates.

This print was published shortly after the incident it depicts, in a book criticising the access restrictions. On 16th May 1751, a party of Richmond Parish officials were taking part in the annual Beating the Bounds ceremony. They wished to follow the parish boundary into Richmond Park and, when they found that the ladderstile had been removed, defied the authorities by breaking into the Park through a breach in the wall.

I’m particularly amused by the three men sitting astride the wall who appear to be having a lovely time. 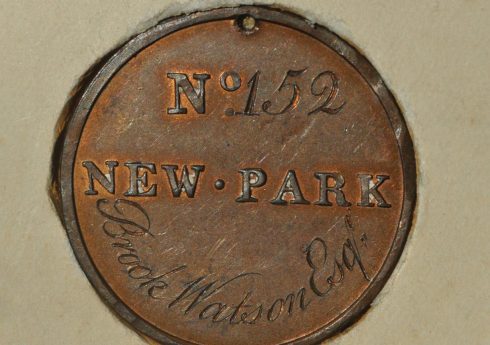 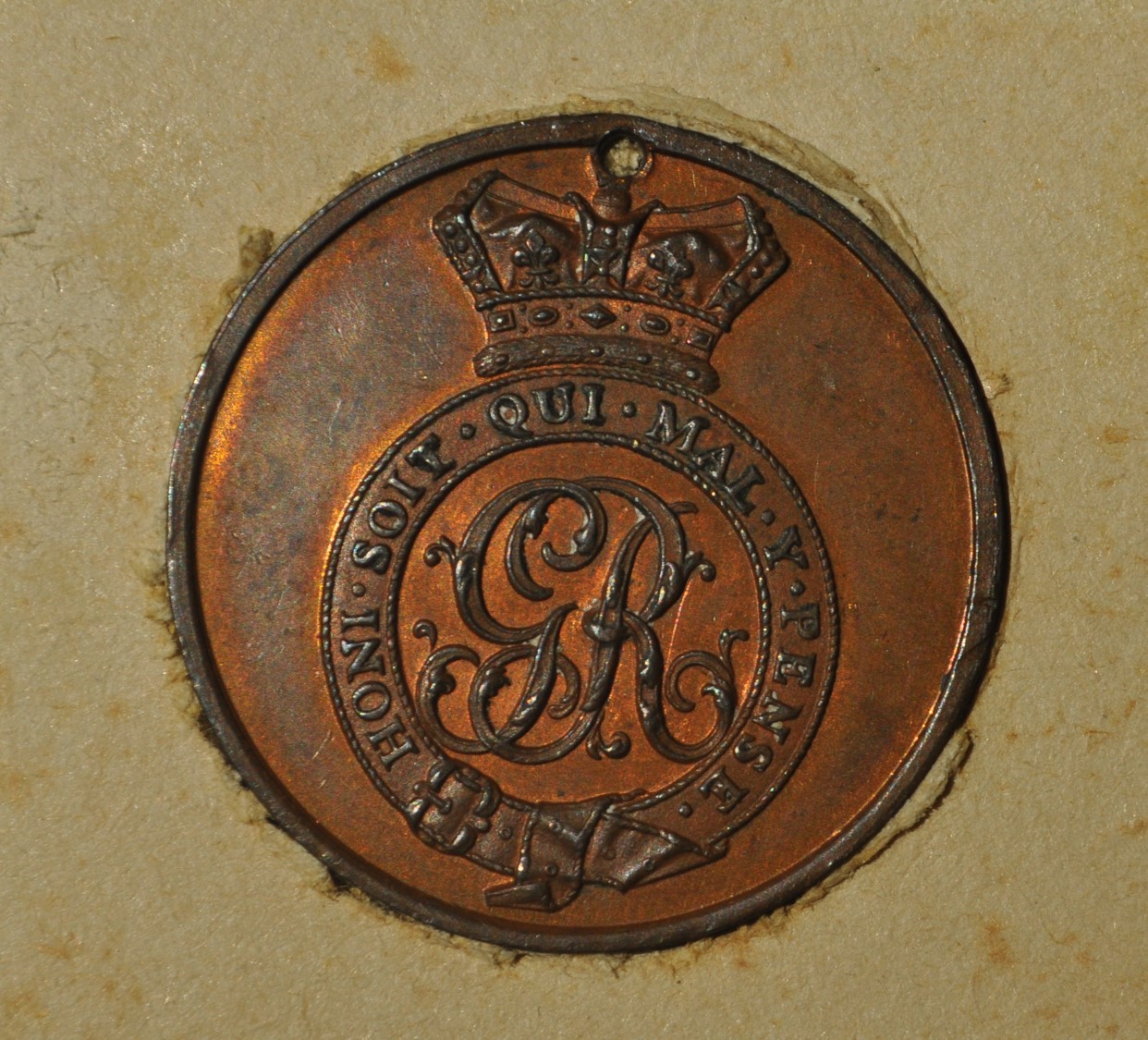 This is an example of the sort of token issued to the privileged few giving them entry to Richmond Park when public access was very limited. There are several in The Hearsum Collection but this one is particularly interesting because it was issued to an identifiable person, Brook Watson (1735-1807). A considerable amount is known about Watson – most extraordinarily that his right foot was bitten off by a shark!

The event happened when the 14 year old Watson was swimming in Havana Harbour, Cuba. At the time he was serving on one of the merchant ships belonging to his uncle, with whom Watson had gone to live when he was orphaned at the age of 6. He was rescued by his shipmates but had already lost his foot and subsequently had to have the leg amputated below the knee.

Watson later forged his own career as a merchant. He returned to England in 1759 and went on to become an MP and Lord Mayor of London; he was made a baronet in 1803. He lived for many years at East Sheen, close to Richmond Park.

On Monday 1st August 1814, London threw a huge party to celebrate the end of war with France and the centenary of the accession to the throne of George I, the first of the Hanoverian monarchs. Spectacular entertainments, which were free for all to enjoy, were put on in three parks – Hyde Park, St James’s Park and Green Park.

This delightful print shows some of the attractions laid on in St James’s Park, including a hot air balloon that took off from the area in front of Buckingham House (now Palace). The main feature was the Chinese-style bridge, topped by a seven-storey pagoda, which was at the centre of a firework display. While the bridge remained until 1825, the pagoda did not survive the night. It caught alight during the firework display and was largely destroyed. Sadly, the fire killed two workmen but was much appreciated by the crowd, who thought it was an intended part of the celebrations.

Flocks of sheep were once a common sight in London’s parks. As nature’s lawnmowers, they were regularly brought in to provide an economical way of keeping the grass under control. This photograph, taken in 1948, shows a flock of sheep that was sent from Ayrshire in Scotland to graze in Kensington Gardens. The flock was tended by 60 year-old George Walbran, a shepherd for 45 years, with his two Border Collies, Tess and Dot.

The practice of importing ovine lawnmowers died out in the 1950s with the arrival of machines that cut the grass. However, The Royal Parks are once again considering the use of sheep as an eco-friendly alternative to machine mowing. During Green Park Grazing Week, in August, rare breed sheep and cattle commute daily from Mudchute Park and Farm on the Isle of Dogs. As well as keeping the grass short, the animals spread seeds in their manure which helps improve biodiversity.

Play, Protest and Pelicans: A People’s History of London’s Royal Parks is open until 9 February 2020. 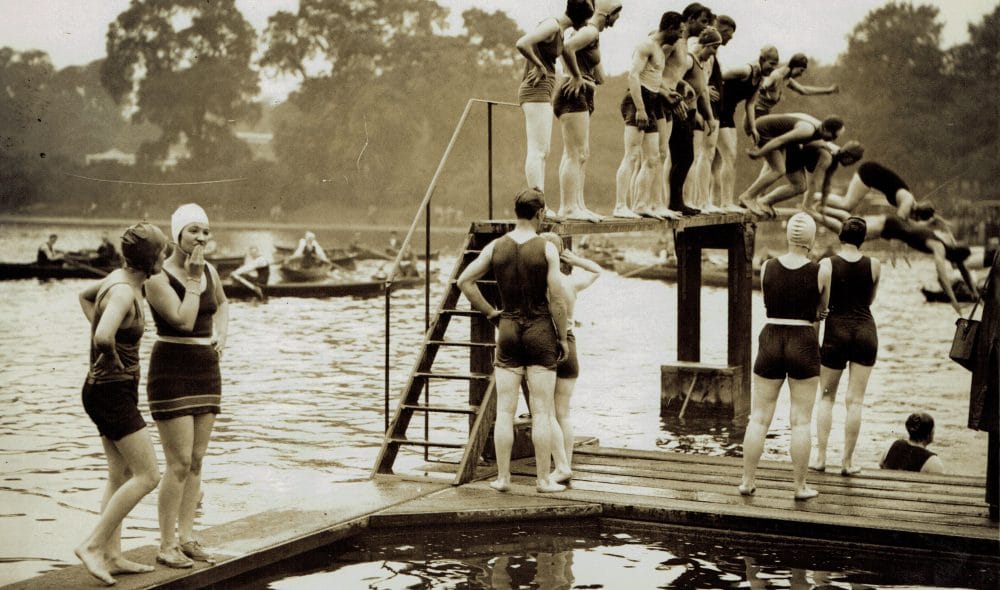