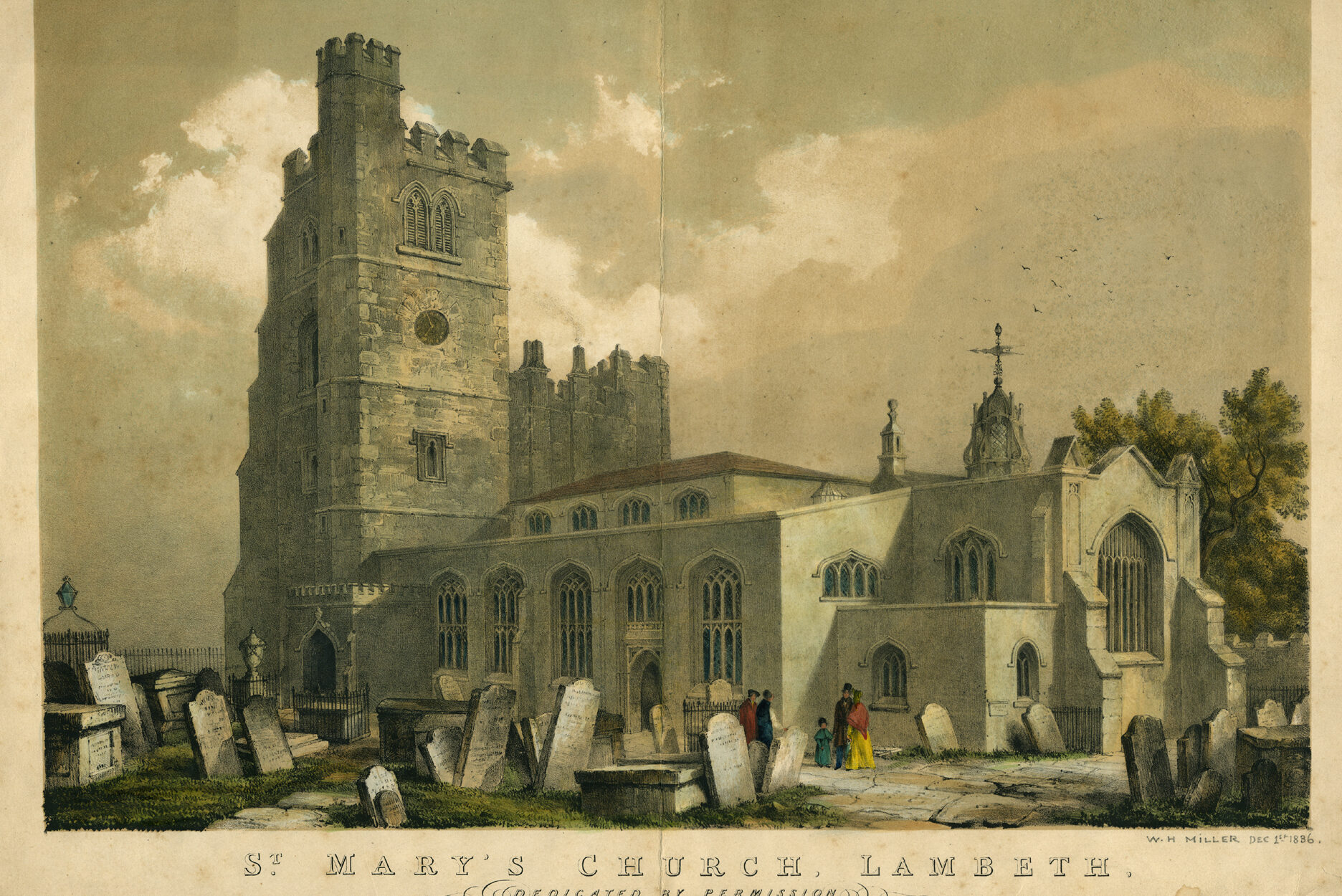 Object of the Week: Lithograph of St Mary’s Lambeth after W.H. Miller, 1836

St Mary’s, Lambeth has always had high-brow Vicars. In Tradescant’s time it was Daniel Featley, described in the Survey of London of 1951 as ‘an enthusiastic controversialist’ (so, an ancient profession). In the years before the Civil War, Featley disputed with both Catholics and Puritans, and in 1643 five of Cromwell’s soldiers pursued him into a service with guns loaded. In 1816 Christopher Wordsworth, brother of the poet William, was appointed Rector of St Mary’s; he left to become master of Trinity College, Cambridge.

There’s an explanation for such scholarliness: the Rector of St Mary’s also served as domestic chaplain to The Archbishop of Canterbury, whose residence is next door (with a connecting door in the Palace wall). Christopher Wordsworth was Chaplain to Archbishop Manners-Sutton; he was replaced by George D’Oyly, born in Sussex in 1778 and with four brothers as soldiers, one of whom died at Waterloo, and another in Kandy, in Sri Lanka. 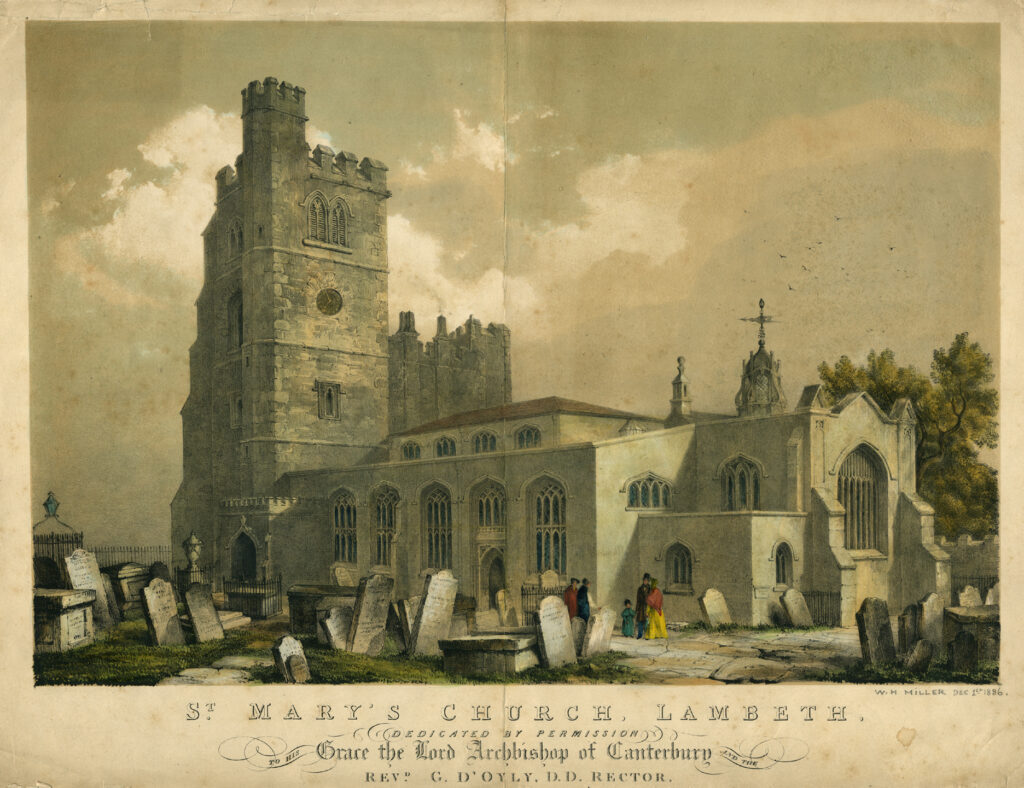 The Revd. George D’Oyly was a Fellow of the Royal Society and a founder of King’s College, London. The sermons he preached in this church were published in two volumes in 1847, the year after his death. It was he who raised the funds to restore the medieval tower of St Mary’s, captured in this view drawn in 1836 by the artist W. H. Miller, and published as a lithograph in our collection (and acquired in 2003). Miller, the artist, lived at the foot of Westminster Bridge and painted Lambeth scenes. Why was the painting made? St Mary’s was a Picturesque sight, and conveniently close to London to set up an easel on a stroll, so was painted by artists such as J. C. Buckler, J. M. W. Turner and Humphrey Repton. Or was the print to celebrate the Tower’s restoration, at a cost of more than £4,000, donated by members of the congregation? It is dedicated to the Rector, and to the Archbishop. 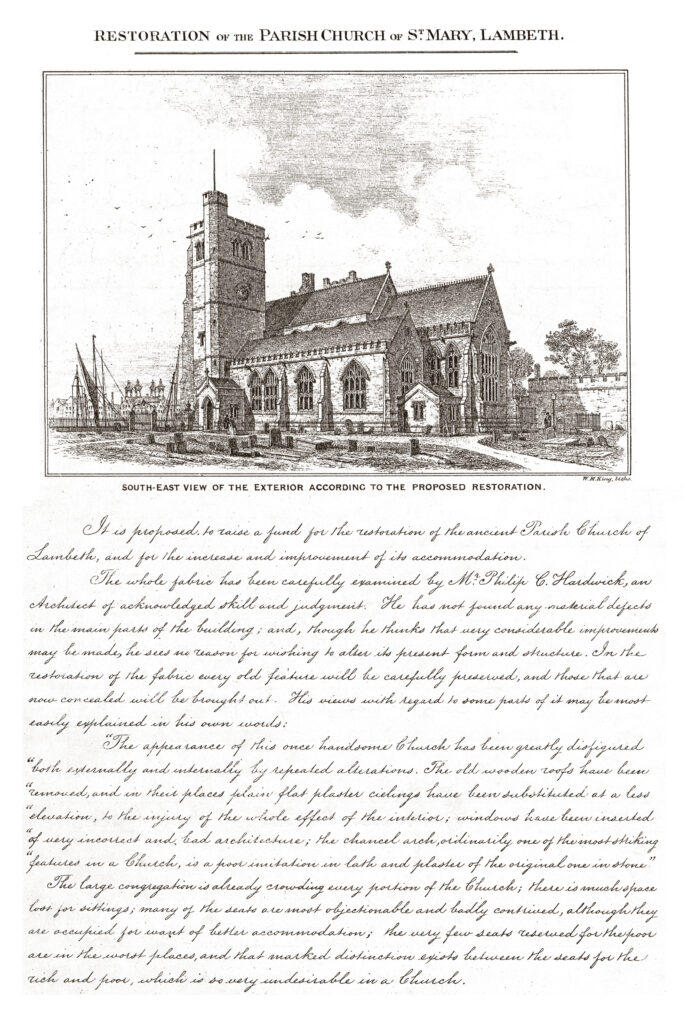 It’s interesting to compare and contrast to the church as rebuilt in 1851 by D’Oyly’s successor. Only the tower was left standing. But it’s a painful comparison if you like your churches as accretions of dusty centuries: Perpendicular tracery in the windows, the Georgian turret on the rooftop, and a mysterious doorway all vanished. Its replacement was designed by Philip Charles Hardwick with a nave of new Kentish ragstone with its elevations in rigorous imitation of one period of Gothic, the Decorated. And the churchyard was tidied up, too: perhaps Miller exaggerated but in 1836 it tumbled and tilted with gravestones.

It was in D’Oyly’s twenty-six years as Rector that Lambeth was transformed: industrial works lined and polluted the riverside, and streets of straight brick houses stretched out through Kennington and Vauxhall towards Brixton and Peckham. Such was the splurge of housing development that thirteen new churches were built within the parish. Lambeth High Street became a slum, and D’Oyly’s successor buried 1,618 residents of the parish when the cholera epidemic broke out here on the waterside in 1848. 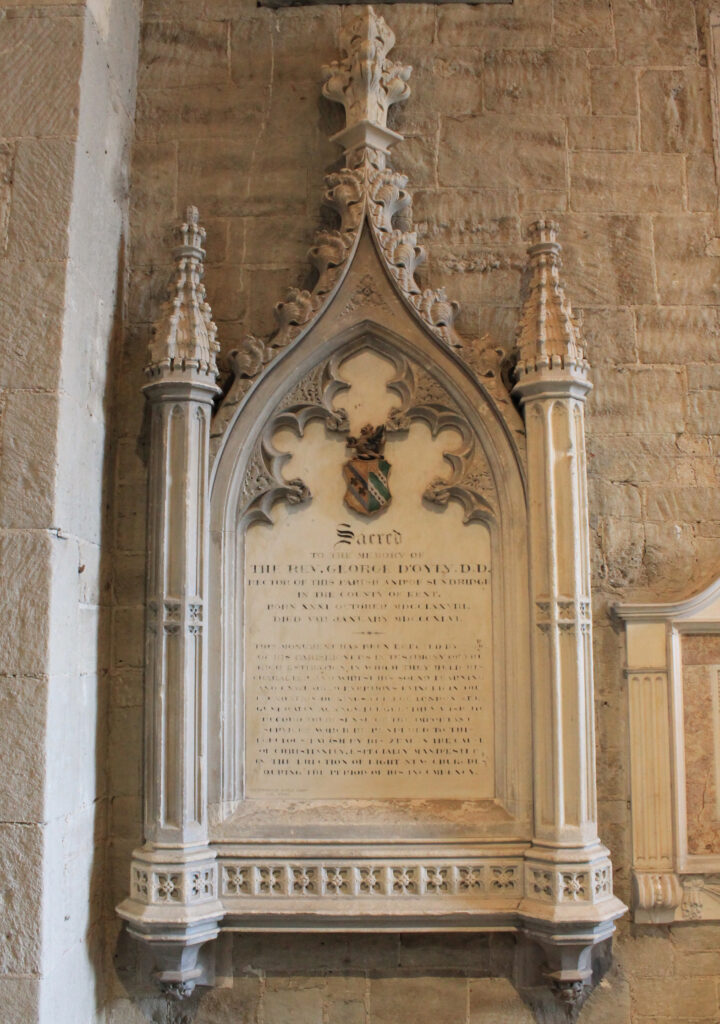 If you browse in the Museum shop you’ve met D’Oyly: this is his monument, carved in the Westminster Marble Works in Earl Street, just across the river. The architect is not named but it’s by a good architect: it’s a design in the crockety, pinnacled style of neo-Gothic which you see, for example, as the street screen to King’s College, Cambridge.

At a time when the Museum is shut, you somehow feel closer to these past voices. And when the streets are absent of traffic, it’s not impossible to imagine the Rector walking the short distance from the Rectory on Lambeth Road, with his Sunday morning sermon in his hand.

Christopher Woodward is giving an online talk about the History of St Mary’s on Tuesday 6 April, 6.30pm.
BOOK TICKETS