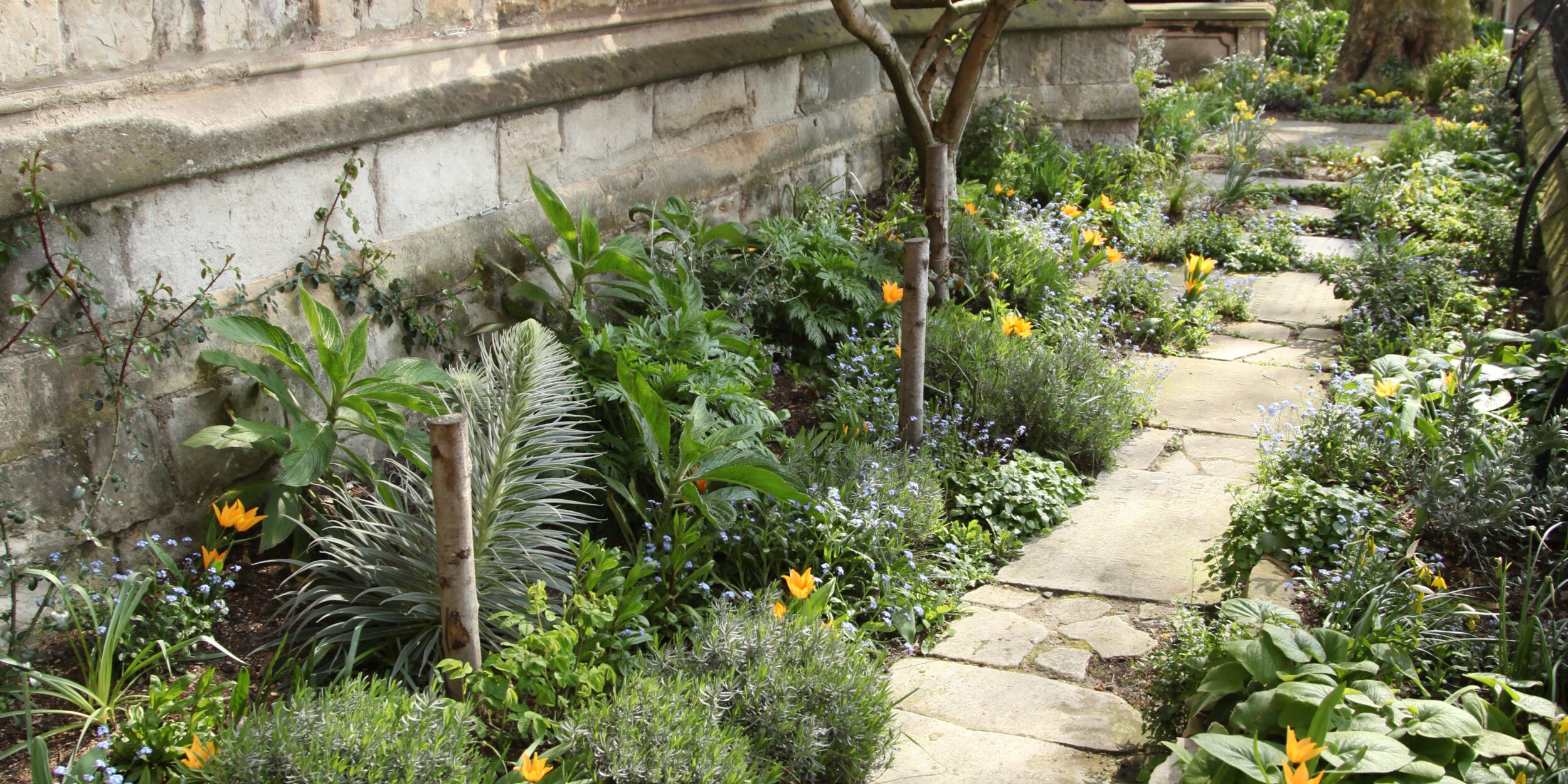 New Dry Beds: A Tricky Area of the Museum Garden

In packing down the Garden Museum’s hugely successful 2020 exhibition, Derek Jarman: My Garden’s Boundaries are the Horizon, we were left with two tonnes of stone shingle to repurpose, and, as it happened, an ideal location for it within the museum gardens. There is a slim section of garden that runs along our river-facing front, bordering Lambeth Palace forecourt to the west and looking out at Westminster beyond. Obscured in part by the museum’s boundary wall, and by a colossal London plane tree in front, it is a space easily overlooked, but one of the few planting areas fully open to afternoon sun.

The conditions here have always seemed to me suggestive of the Dungeness landscape: drying winds tear through from the river, the soil is immensely free-draining (lightweight, nutrient-poor river silt); the aspect sun-facing and exposed. And so, horticulturally speaking, it is immensely tricky territory. Prior to the Garden Museum’s significant redevelopment project of 2015-17, only tough Mediterranean plants had managed to settle here — sun lovers like lavender and helichrysum as found at Prospect Cottage — and, due to heavy construction equipment unavoidably stationed on site throughout the build, few remained once the dust had settled. Over the last few years, therefore, I’ve worked with our Garden Museum horticultural trainees to turn the awkward site and soil to our advantage, experimenting with planting best suited for this environmental niche. This last spring, with plants relatively established, it felt just right to repurpose the Jarman exhibition shingle as a hard-wearing top mulch: it keeps the weeds down and locks a little more water in, and forms our own stony beach on the bank of the Thames.

The development of this space — what we now call the ‘dry garden’ — was influenced by two events in particular. First, the instalment of the Museum’s cherished medlar tree, a feature retained from the former knot garden that pre-dated our lush, Dan Pearson-designed courtyard. It is an attractive, architecturally compact little tree with silvery wood and a stout trunk, planted in the early 1990s by longstanding Garden Museum friend Stephen Crisp (also longstanding head gardener of Winfield House in Regents Park) and Mary Searls, a volunteer. It was Stephen who advised me, in advance of redevelopment, how best to prepare the medlar for lifting and transplanting — to dig a circular trench encouraging tight, branching roots; reduce the canopy and lift the following autumn. And he was entirely right. A year after transplanting (the agonising details of which I will skip!), there appeared sparse flowers and a cluster of fruit. Came more the following year; came a bounty in 2019. But I’m straying from the point. The tree — positioned halfway along the dry garden — brought to the space a sense of place, scale and habitation, drawing the eye from one end across to the other. Into this setting new plants could follow.

The second influencing factor was the die-back of a section of the front garden’s block topiary. True to the hostile conditions — made yet more challenging by the possibly centuries old, moisture-guzzling London plane tree in situ — the yew struggled to take root here despite devoted watering, and, in its entirety, browned fully to the ground. So the first task was to decide how to reflect the intended ‘block’ effect of the missing hedging, and then how to integrate this into what clearly needed to be a drought-tolerant planting scheme going forward. During a visit to the Inner Temple Garden, just along the river from us, I noted how well (and happily!) liriope muscari contended with the dry shade beneath plane trees. There, a long corridor of liriope underplants the Inner Temple’s riverside planes: the effect is calming, the structure neat, and the plants content.

Employing liriope, I kept the footprint of our former hedge, allowing newly added perennials and statement shrubs — the likes of Olearia macrodonta, tree germander, cistus and blue-green juniper (prompted by juniper encounters on Naxos island) — to loosen the edges and spread out, informally, along the stone path. Favourite plants here include those influenced by other holidays and horticultural trips to similarly arid environments: Canary Island foxgloves (Isoplexis canariensis) and echiums (E. nervosum, crimson E. wildpretii and towering E. pininana); Atlantic cranesbills and South African false freesias (F. laxa). Between the teucrium, artemesia, salvias and poppies, a silver-blue-orange colour scheme currently predominates, nonetheless it remains an area for experimentation — to try new plants and see what takes.

Having now developed its own sense of place, annual fixtures are emerging, like the orange Shogun tulips that fall open in spring, set off by forget-me-nots kindly gifted by garden photographer Eva Nemeth. Gifts, in fact, are the heart of this little garden. We have Grecian barley from plantsman Dan Pearson, orange annual poppies from garden designer Jane Brockbank, while the cistus and self-seeding palmate geraniums were presents from Kiftsgate Court Gardens in Gloucestershire. It’s nice to have somewhere to accommodate the generosity that is so common among gardeners.

Thanks to Derek Jarman’s garden at Prospect Cottage, Beth Chatto’s enduring gravel planting, iconic RHS Hyde Hall and, more recently, the reinstatement of Delos at Sissinghurst, the thirst — perhaps not the right word — or appreciation for ‘dry’ planting schemes has become widespread in Britain. Climate Change, of course, plays into it: keeping needy plants irrigated throughout increasingly dry springs is as hard on the psyche as it is on the wrist. But I don’t see Mediterranean-style planting like this so much as a passing trend, but a longer-term shift in horticultural perspective, reflective of an increased awareness of the environmental impacts of gardening more generally. Having spent years trying to nurture and encourage many plants simply incompatible with our little river-facing garden — to water and mulch them into fruition — it’s a joy to witness the steady, easy growth of plants for which this is actually a fitting home, enhanced all the more by the effect of Dungeness shingle.