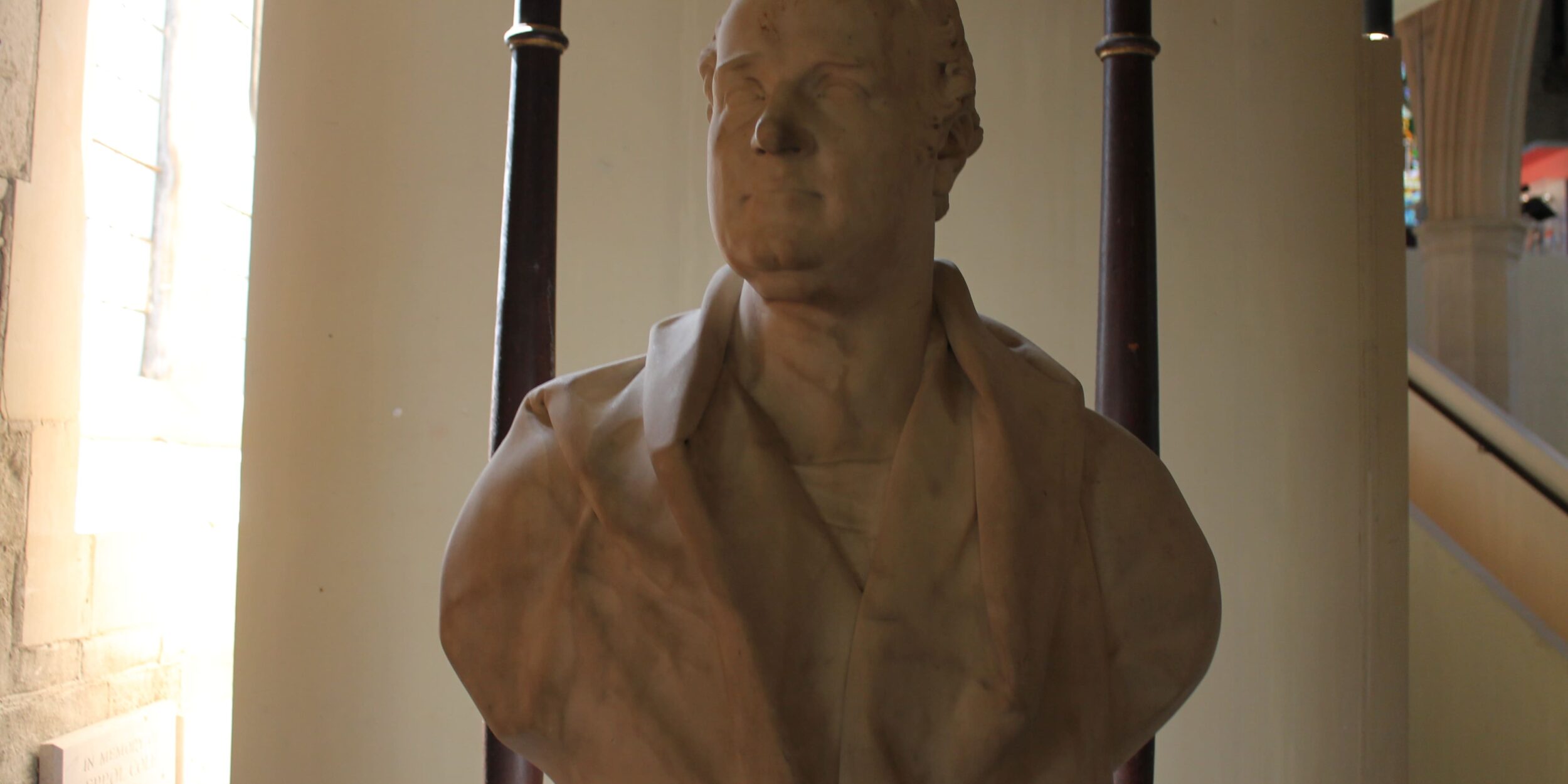 In death, Mr Lett weighs half a ton. What he weighed in life, we’ll never know, but he was rich enough to be plump. Lett, a timber merchant of Lambeth is commemorated in a monument in the north-east aisle of the Museum: where the old café was. His bust is above a plinth detailing his two wives, eleven children, and the year he served as High Sherriff of Surrey. He died in 1830, so a young Dickens might have glimpsed his face shining through a dining room window on one of his footsore, hungry, curious tramps through the night streets. That’s an idle thought, perhaps, but the face is kind, and rubicund; pleased with things, but not pompous.

We know how much Mr Lett’s monument weighs because it will take four men to move him to the opposite side of the church. Four technicians from Martinspeed, a fine art handler, are banging in wedges under the plinth, using a mallet made of rubber. Next he will be slid on Teflon on to a gantry, to be hoisted into a bespoke crate.

Mr Lett’s face beamed out in my first week at work. That could be in the V&A, I thought. And it could be: the work is signed by Sir Francis Chantrey (1781 – 1841), the leading sculptor of portraits of the Regency period, and with a particular gift for making marble into soft, warm flesh. The sculptor of Sir John Soane which is the centrepiece of that architect’s Museum is by Chantrey; so is James Watt in Westminster Abbey.

But Mr Lett is a blank but for his bust, the litany of his family, and references to his business in timber yards and property on the south bank of the Thames. But we hear his voice, precisely, in a printed interview of 1818, when the work of the parish charities was reviewed by Commissioners. Thomas Lett was a Trustee of at least two schools for poor children: one founded by Archbishop Tenison, and a second by the legacy of Dog House Fields by Richard Lawrence, who died in 1661. Lett answered the Commissioners questions on the numbers. Twenty poor boys, and twenty girls, were taught. The biggest expenditure was not on books, coal, or teachers but on uniforms: each child was clothed at Easter, and again at Christmas, at a cost of a pound each.

In the new gallery Lett will face a sculpture cast in Coade stone of a Charity School boy, book in hand and uniform proudly – and warmly – buttoned up. This sculpture was given to the Museum by Archbishop Temple’s School after it relocated from Lambeth Road in the 1970s; Temple’s School began life as Lawrence’s School with that legacy of Dog House Fields.

This is thanks to the Walcot Foundation, who have chosen to fund a gallery to mark next year’s 350th anniversary of the will of Edmund Walcot, a haberdasher, of 18 acres of land ‘for the most poor and needy’ people of the parish of St Mary’s. The Foundation merges a multiplicity of charities set up over the centuries for the poor of the parish, such as Ralph Snow, who in 1707 gave £100 for a new gallery in the church and £100 as a fund to buy bibles for poor children (stamped with his name) or the Mr Turberville who a hundred years later left money for two poor boys to learn a trade (so long as it was not that of fishermen, chimney sweeps, or watermen). It is remarkable to think of how a few strokes of the pen translates, through careful management over the centuries, for life-changing grants to underprivileged children who walk the same streets towards the river today. And how philanthropy can have a physical impact on a city otherwise shaped by the energy of speculators and industrialists and the incontrovertible force of traffic: Lambeth, like any London Borough, can also be explored in terms of the schools and orphanages, the fountains and horse troughs, and green spaces such as Kennington Park made by interventions of charity.

In the age before state education, and welfare, the administration of such charity was a major part of a Rector’s life. (In Lett’s time, it was Rev. Christopher Wordsworth, brother of the poet). Mr Lett’s plinth and shoulders are temporarily wrapped in a blanket, his face cosseted in a cumulus of cling film. Next, a wooden box will be built around him, snuggly lined with plastazote foam and tyvek and tough enough to wheeled across the building site to a safe storage. Just moving Mr Lett out – and in a year’s time back – will cost £3,000. But he will be happy. When he is unwrapped he gaze, again, on one of the pupils in his care: the Coade Stone boy. I hope every button of the uniform is done up. 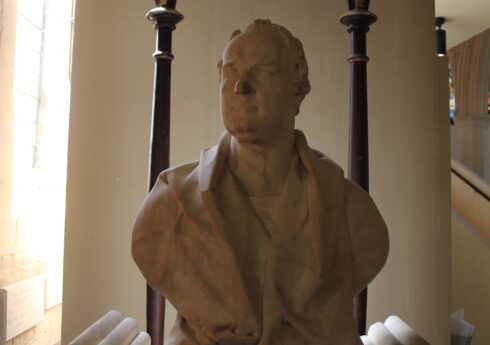