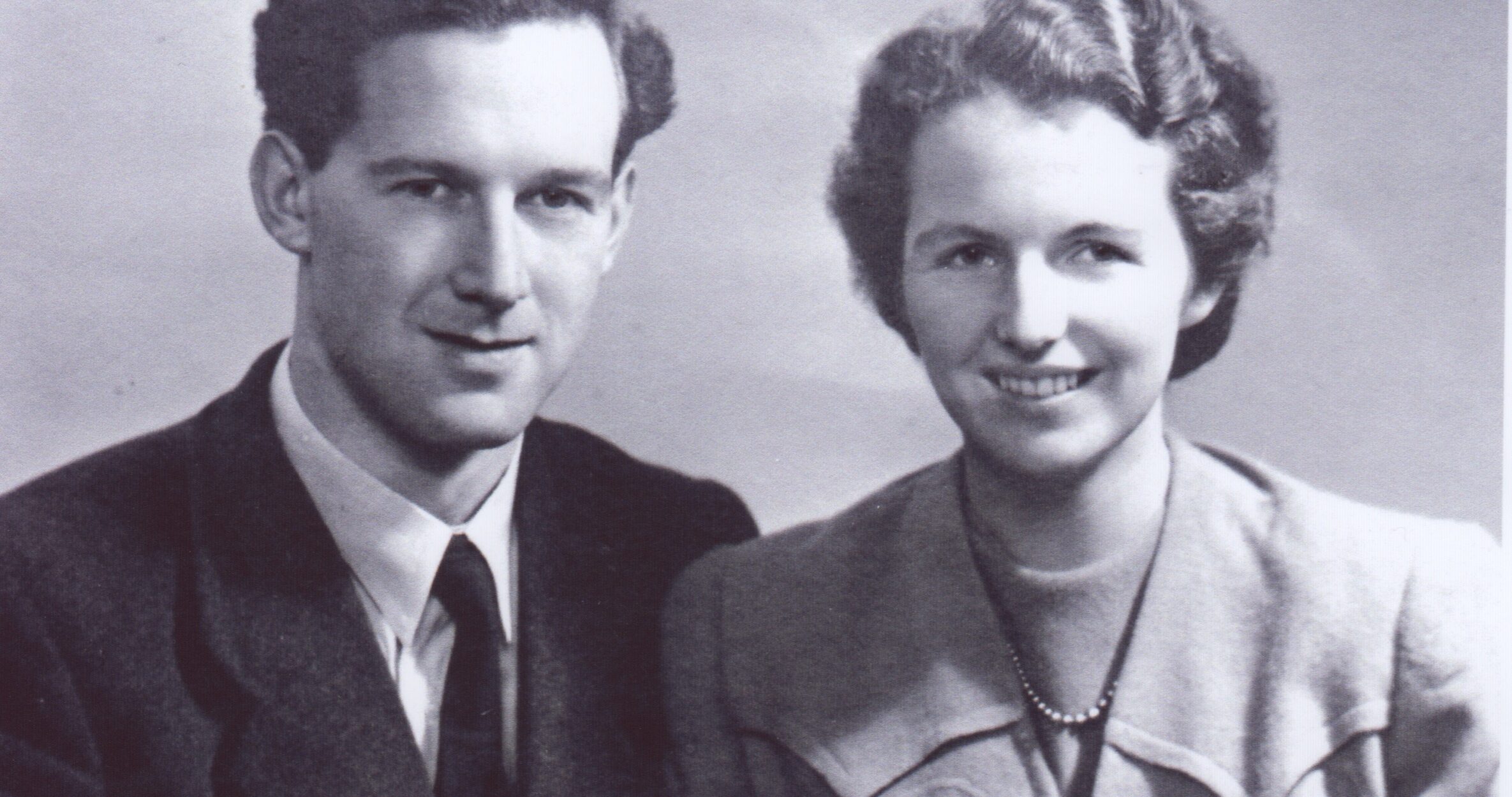 In 1960 Mavis Batey read that the film Sink The Bismarck was playing at the local cinema. Her son Christopher would enjoy it, she thought – and he did. But she had not thought about her own reactions. At the end of the film set on a choppy black and white North Sea, the Bismarck is caught by a circle of British ships, and its men burned or trapped in freezing water below deck:

‘I saw it go down and I really did feel quite sick. I put my head down and my son said to me after a while, “It’s alright Mummy, it’s gone down…” He didn’t know that I was thinking how awful it was that one’s breaking of a message could send so many people to the bottom’.

The treat of my week – and the treat I’d like to share with readers of this newsletter is Jean Stone’s new biography of Mavis Batey, Secretary of the Garden History Society from 1972. The story is so gripping that earlier today I missed my stop on the train. Twice. 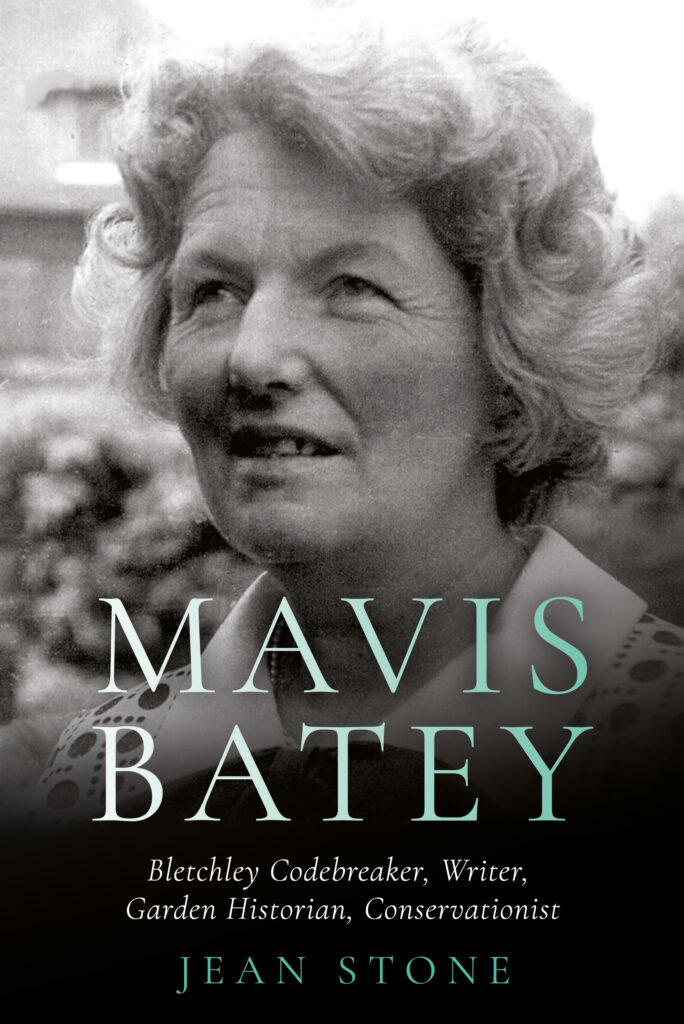 On 27th May 1941 Batey was in the dining room at Bletchley Park when the radio announced the sinking of the battleship terrorising the Atlantic convoys. The room cheered. That night in the cinema in 1960 she could not yet tell her son that she was one of the code-breakers of Bletchley Park; in the film Enigma (2001) she would be played by Kate Winslet. When war began, she was recruited as a student studying German at University, good at crosswords, and with a questioning mind.

And Mavis won the Battle of Matapan. Late one night in March 1941 her curiosity at one Italian signaller’s erratic punctuation broke the Italians’ Enigma Code; off the Island of Rhodes, three British battleships surprised an Italian fleet. Three thousand Italian sailors died; the eastern Mediterranean was won. To Churchill it was the greatest naval victory since Trafalgar. Batey missed the last train home to her lodgings, and was woken on the platform at Bletchley by the wet hiss of the milk train.

In 1965 she and her husband Keith – a fellow code-breaker, now working for the University of Oxford – rented a cottage at Nuneham Courtenay, an estate on a slope above the Thames, ten miles from the spires. It was the abandoned gardens of the 18th-century house which inspired Batey to become a garden historian.

Kenneth Grahame once said to his anxious and talkative wife Elspeth: ‘You like people. I like places’. It’s a question. Do places, or people, intrigue us more as we grow older? But gardens, and worked or designed landscapes, were for Batey where places and people come together. And Nuneham is a particularly intriguing place.

In the 1750s the 1st Earl Harcourt, a courtier to George I and investor in the East India Company, built a big stone house on the hill above the Thames. In order to create a serene, green parkland he demolished the medieval village and built model cottages for his tenants, each identical. A Picturesque mischief today (the A407 runs past their doorsteps) at the time the re-housing was as didactic as a 1960s slum clearance.

Batey’s deepest academic love was English poetry, and she connected the setting of her new home to Oliver Goldsmith’s poem The Deserted Village (1770), which laments the destruction of a community, its neighbours evicted by a nobleman of ‘silken sloth’ who wishes to create a parkland, pristine, but without people – or activity. (It is Kim Wilkie, the landscape architect who worked with with Batey on the masterful Thames Landscape Strategy, who underlines that Alexander Pope asked garden-makers to consult the ‘genius’ and ‘use’ of the place). Fifty villages were evicted to make landscape gardens in 18th-century England; it was Batey who identified Goldsmith’s subject as Nuneham in her first publication on garden history.

Nuneham’s landscape reveals a second story. In 1783 the 2nd Earl commissioned Paul Sandby to depict the ruins of the old. At first sight, the prints appear to be handsome examples of the contemporary taste for Pictueresque ruins melted into Nature. In fact, these are the son’s critique of his father’s destruction. The 2nd Earl was a radical, who supported the American colonists in a war in which his brother was a Redcoat General. In gardens, that liberalism was expressed by making together with the poet William Mason a garden of flowers, its beds set apart from his father’s vast lawns. A statue of Rousseau declared his philosophy. To make a naturalistic garden of flowers in 1772 was, Batey understood, ‘without precedent’. It was a rejection of the past, a patricide in plants.

It was this garden, not the park, which captivated Batey. ‘It was derelict. Garden ornaments were buried in the grass. I had to cut my way through, almost losing my small daughter in the process. It kept telling me that someone was trying to say something in that place’.

Batey would go on to establish garden history as a discipline and to achieve protection for historic gardens within the planning system. When Painshill Park, the 18th-century landscape close to the M25, was at risk of becoming a nursery for Christmas trees, she discovered that in 1946 Hugh Dalton, the Chancellor and rambler, had sold war surplus goods to enable the purchase of land as war memorials; the Fund, she deduced, had been mislaid.

In fact, the code-breaker who located the Bismarck through a single word was Jane Fawcett, who became an architectural conservationist and Director of The Victorian Society. The two met again at Mavis’ 90th birthday party in the walled garden designed by Lady Egremont at Petworth House and Park, under what is the most eloquent wisteria walk in England.

What Stone shows us is that code-breaker and garden historian were one. To understand German and Italian signals required curiosity at the human unpredictabilities behind the codes. (And why did the 2nd Earl Harcourt reject his Republicanism and welcome the King to visit?). And garden history was about unlocking puzzles. This is what she told students:

‘Physical evidence through survey, aerial photography and excavation was of first importance. Archive sources included household regulations, estate accounts and inventories; deeds, leases, sale particulars; maps and plans including estate enclosure and tithe; family topographical paintings and drawings; architectural drawings and plans; building contracts, oral reminiscences, letters and diaries. It is essential to find out everything possible about the owner of the house… Where did the owner get his money from? Why did he move or enlarge his house or park? What sort of man was he and who were his friends and associates and what clubs did he belong to? What books did he subscribe to and were any dedicated to him? If married what were his wife’s family’s interest and ownership?’

And it is putting such evidence together which is the thrill of garden history.

I read this excellent book at the same time as the National Trust published its self-expose of properties caught up with the slave trade, slavery, and colonialism. It kicks off with a dismissal of the V&A’s ‘Destruction of the Country House’ in 1974, without pausing to recognise that that first generation of conservationists of gardens and houses, big and small, were trouble-makers taking on the system. That said, it is not as provocative as the press has suggested: a cut’n’paste of existing publications on British history, it will not shock anyone who has studied A level history in the last 30 years, or ever read a book by William Dalrymple.

What is depressing is the laziness of the application of history to individual people, and places. Or, put another way, the absence of curiosity at the twists and turns, hillocks and hollows of the human past which enlivened Batey’s reading of designed landscapes. She understood the pain of the past more deeply than anyone who reads this cartoon of right’n’wrong; it is only by understanding the choices which people make that the past comes to life. Of the young men drowned in the Bismarck’s coffered hold she continued: ‘That was war and that was the way we had to play it. If we thought about it too much we should never have been able to cope’.