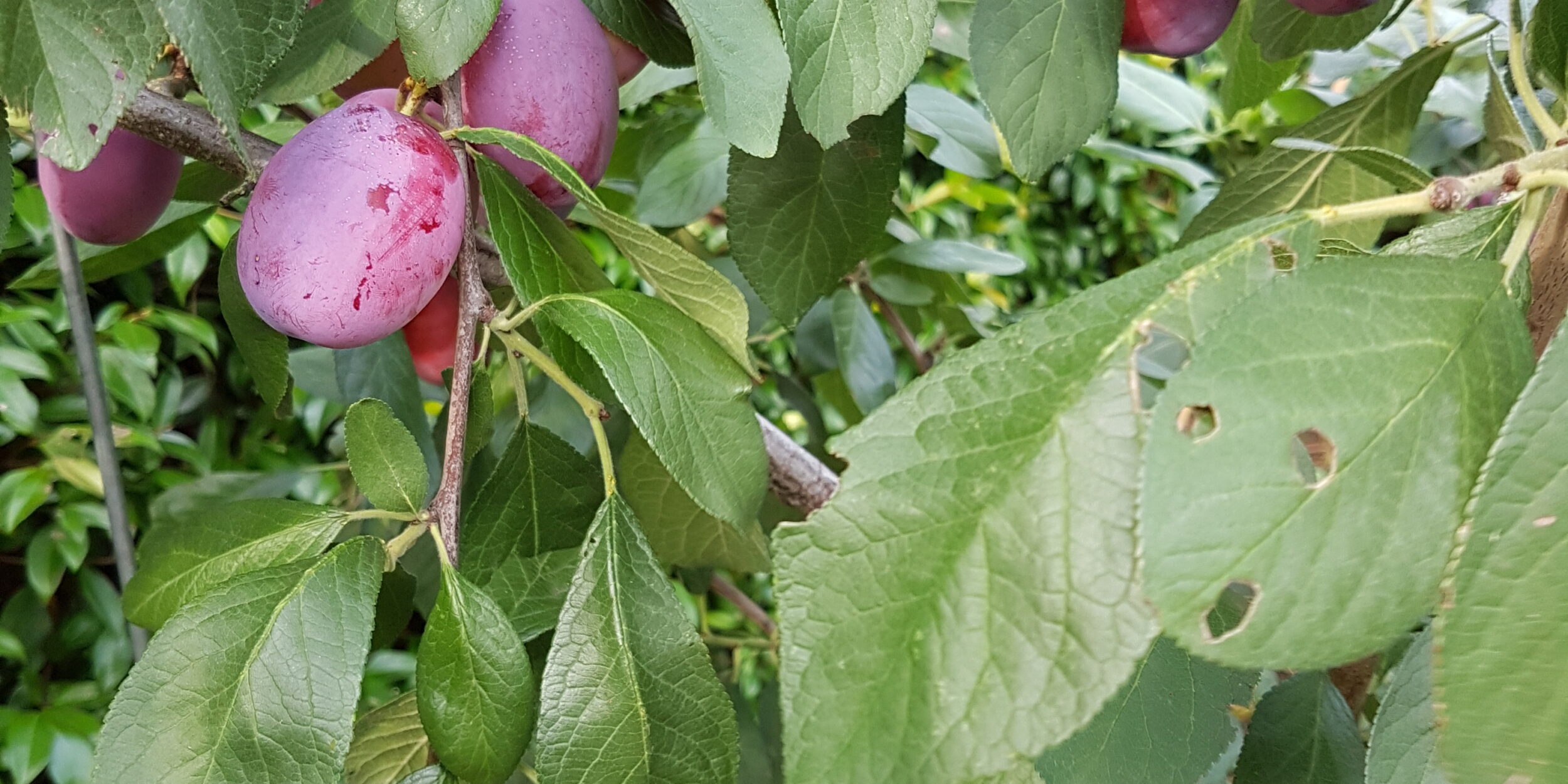 All about Plums – Juicy Facts of Prunus Domestica

Our Science Learning Officer, Samia Qureshi shares all her juicy facts on the stone fruit plum, and introduces us to some of the different varieties.

Plums are classed as Stone fruits and are of the Genus Prunus, which is believed to have originated in central Asia.

The plum Prunus domestica exhibits great diversity and can be red, purple, green or golden. In the UK dried or dehydrated plums are termed prunes whereas in the USA the term is used to describe both dried and fresh fruit.

Botanically the plum is known as a drupe which means its fleshy fruit surrounds a single hard seed known as a stone or pit. A groove is found running down one side from top to bottom. The flesh is firm and juicy and the peel smooth and waxy in texture that adheres tightly to the flesh. Mature plums can have a dusty-white coating which is a naturally occurring epicuticular natural wax called a ‘wax bloom’. The purpose of this is to minimize moisture loss from the surface of the fruit skin. The skin itself is multilayered and filled with different pigments whereas the epidermis is a single layer of colourless cells which enable the yellow, red or purple beneath show through.

It’s important to remember that all plant material is composed of cells that continue to function after harvest; they are living products. Plums are climacteric fruits which is a technical term to describe the sudden surge in respiration rate, usually after harvest, which is known as a climacteric rise which is triggered by ethylene gas produced by the plums themselves. Fruits such as pears, bananas, avocados and mangoes also show this phenomenon whereas citrus, grapes, cherries, pomegranates and vegetables do not. Over a period of several days at a moderate temperature a characteristic skin colour becomes apparent, the flesh softens, starch is converted to sugar and flavour and aroma develop. This is the stage of prime eating quality or ‘ripeness’. Subsequently as the rate of respiration declines, senescence sets in, off-flavours develop, and the dying tissue becomes increasingly susceptible to attack by decay organisms. Commercially the aim is to harvest before the climacteric rise to give the product ‘legs’ or sufficient time for transport and distribution to shops. In the case of Chilean plums which spend up to three weeks on the water to the UK it is crucial to assess correctly to avoid super hard plums on the shop shelf that never ripen or a consignment so ripe it is rejected by supermarket customers…I speak from experience!

Alexander the Great brought stone fruit back to Europe after his ‘conquest’ of Persia. The cultivated plum in the UK is thought to be a result of a natural cross between the cherry plum and the sloe which probably took place in the Caucasus. The sloe, Prunus spinosa also known as bullens, slags, hedge-picks amongst others is a native woodland fruit in Britain and was eaten before the arrival of the plum. It contains a high level of alkaloids which gives it a bitter taste but improve with cooking and when used to flavour gin.

There are now over 300 varieties of the domesticated plum in the UK. Brogdale is the home of the National Fruit Collection where they have nearly 340 varieties that are planted in pairs and in conjunction with the University of Reading have an online facility where you can carry out a varietal search of dessert or culinary plums.

A fascinating fact is that the stone of a plum is specific to a particular variety with a distinct surface pattern, size and shape; it is like a unique fingerprint. The ability to identify varieties in this manner enabled Wye College to identify 100 plum stones that were found on the Mary Rose ship which sank in 1545 and raised in the 1980’s. The recovered stones were compared with plum stones kept at Brogdale and the results revealed two types of cherry plums, greengages, bullaces and a Catalonia plum.