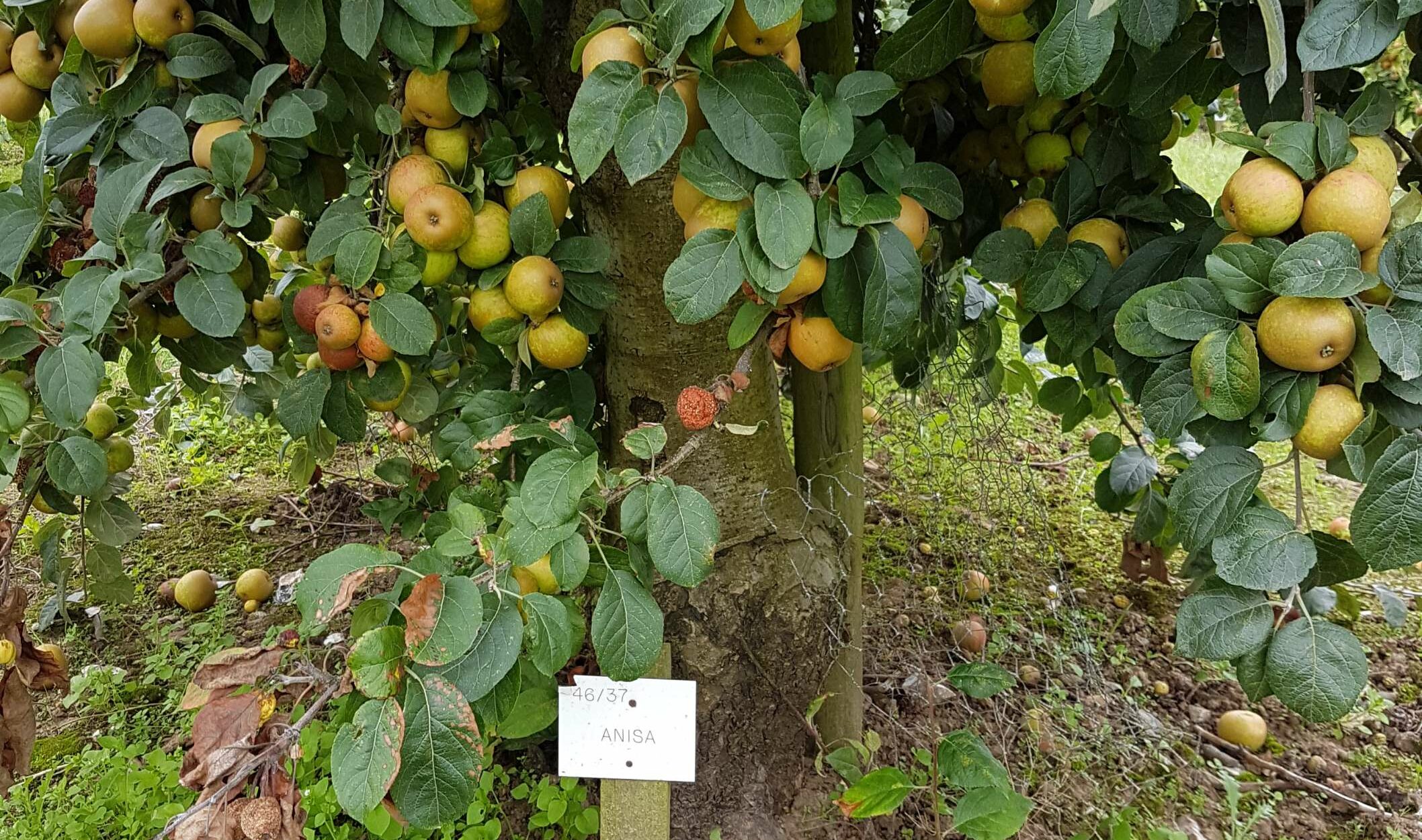 Fruits from the Orchards : Apple

The apple harvest is over and the trees are in the process of shedding their leaves. Apple trees are deciduous and lose their leaves shortly after harvest.

An interesting fact about fruit trees is that they are early senescent which means they reach senescence, which itself means deterioration due to age and a natural process, but fruit trees reach this stage comparatively earlier when compared to other trees such as Oak or London Plane trees. A twenty –five year old fruit tree may have the same characteristics as a 150 year old oak tree.

Commercial orchards have trees that are generally shorter, dwarf rootstocks which aids in easier harvesting with varieties grafted onto the same vigorous rootstock throughout the orchard.

Apples, Malus domestica, along with pears, are the most important temperate fruit crops. They originated in Asia Minor and spread east and west and have been cultivated in Europe and western Asia since pre-historic times. In recent centuries they were established in North America, South America, Australia, New Zealand and South Africa and are also grown in the cool highlands of some subtropical regions such as northern India, Pakistan and east Africa. Thousands of cultivars have been bred of which a limited number are of commercial significance.

Known as pome fruits, apples and pears have seeds in the form of ‘pips’ located in five cavities within the core tissue. The fruit develops from an inferior ovary and the calyx remains are located on the distal end of the fruit. There have been many scientific studies on the physiology of apple and pears and much is known about the influence of orchard, cultivation and climactic factors on subsequent storage potential of the different varieties grown commercially globally.

Pre- harvest sprays of a calcium compound, typically in the form of calcium chloride in the UK, is a foliar application that improves postharvest quality and storage life of apples. It minimizes the occurrence of disorders such as bitter pit, water core, lenticel blotch pit and senescent breakdown to name a few.

Apples and pears show a climacteric pattern of respiration and classed as climacteric fruits where carbohydrates are accumulated during maturation in the form of starch. As the fruit ripens starch is broken down to sugars. In non-climacteric fruits sugars tend to be accumulated during maturation. Measurement of these sugars gives an indication of stage of ripeness or maturity of the fruit and whether it is ready to be picked. The timing of harvest is critical as the optimal picking date for long storage is shortly before the anticipated rise in respiration rate.

The optimal storage temperature differs for each variety and takes into account susceptibility to chilling injury and whether storage is simple air storage or where the atmosphere has been modified, a system which extends storage life. The temperature, humidity, oxygen and carbon dioxide concentrations in the store are carefully regulated with the aim of reducing the respiration rate of the apples in store. Carbon dioxide inhibits enzymes in the respiratory pathway of the stored fruit and delays the overall ripening process as does a low oxygen environment.

There are nearly 8,000 different types of apples around the world with 2,000 varieties in the UK alone. Brogdale in Faversham is the home of the National Fruit Collection where over 4,000 varieties of fruit are kept including over 2,000 apple varieties. There is ongoing research and development into breeding new UK varieties. So it is possible to have an apple a day and it could never be the same one twice. There is a reason for saying ‘an apple a day keeps the doctor away’, not because they are a good source of vitamin C, which is not particularly high, but do have a high antioxidant content. Varieties such as Gala, Red delicious, Empire and Pink lady are at the sweeter end of the spectrum with Cox, Braeburn, Granny Smith and Bramley apples at the tangy end.

The Braeburn apple tastes of cinnamon, nutmeg and is very crisp with a firm flesh and is often used for baking pies and tarts as it doesn’t release too much juice when heated. It is thought to have originated from a seedling of the Lady Hamilton variety (perhaps crossed with a Granny Smith which was growing nearby ) and was first discovered in a hedge in the garden of a Mr. Moran in Nelson, New Zealand. After this inauspicious start it was grown commercially in 1952 by William Bros Braeburn.