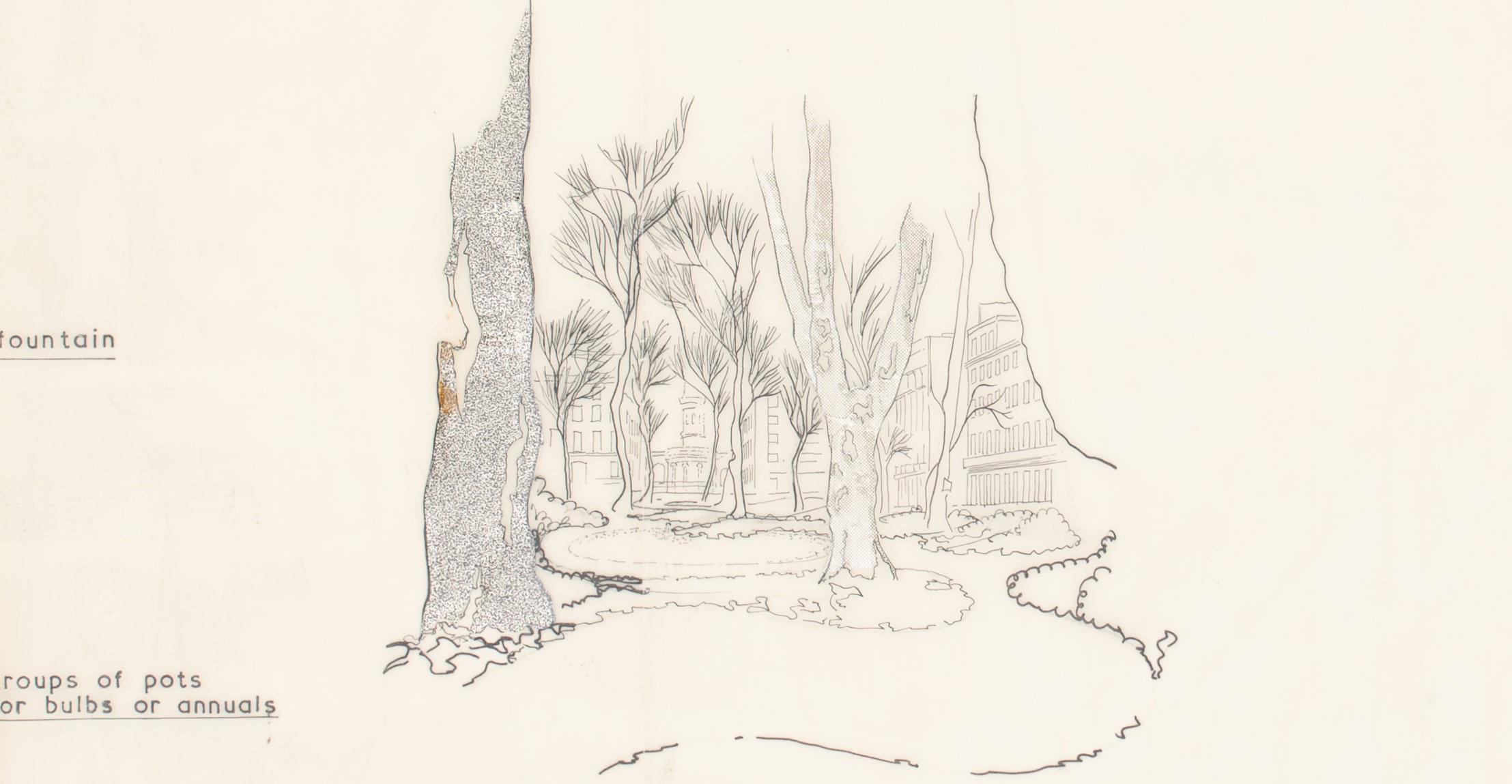 John Brookes MBE (1933 – 2018) was a garden designer, writer and lecturer who brought abstract and modernist principles to garden design. Beginning in the late 1950s, he designed thousands of gardens during his lifetime and generously deposited his archive of drawings to the Garden Museum in 2014. These drawings, often the only records for gardens that have since changed or disappeared, provide evidence of his design approach and vision.

Brookes espoused the concept that when designing a garden, the principal factor to consider is how its occupants will use it. While this sounds very obvious now, at the time this contrasted with the grand garden traditions which were high maintenance, expensive and for show. This concept was reflected in his influential book, Room Outside (1969), where he argues that gardens should be an extension of modern living. As with the interior of the house, Brookes proposed that the garden should be a place for people to use, not just to look out at.

An interesting project within the archive is Bryanston Square, a classic early 19th-century square in Marylebone, London. In 1964 Brookes moved to a mews nearby and was commissioned to give residents something interesting to look at from their first-floor reception rooms. Dr. Barbara Simms expertly summarises the history of the commission and analyses Brookes’ design approach in her monograph, John Brookes: Garden and Landscape Designer (Conrad Octopus, 2006). 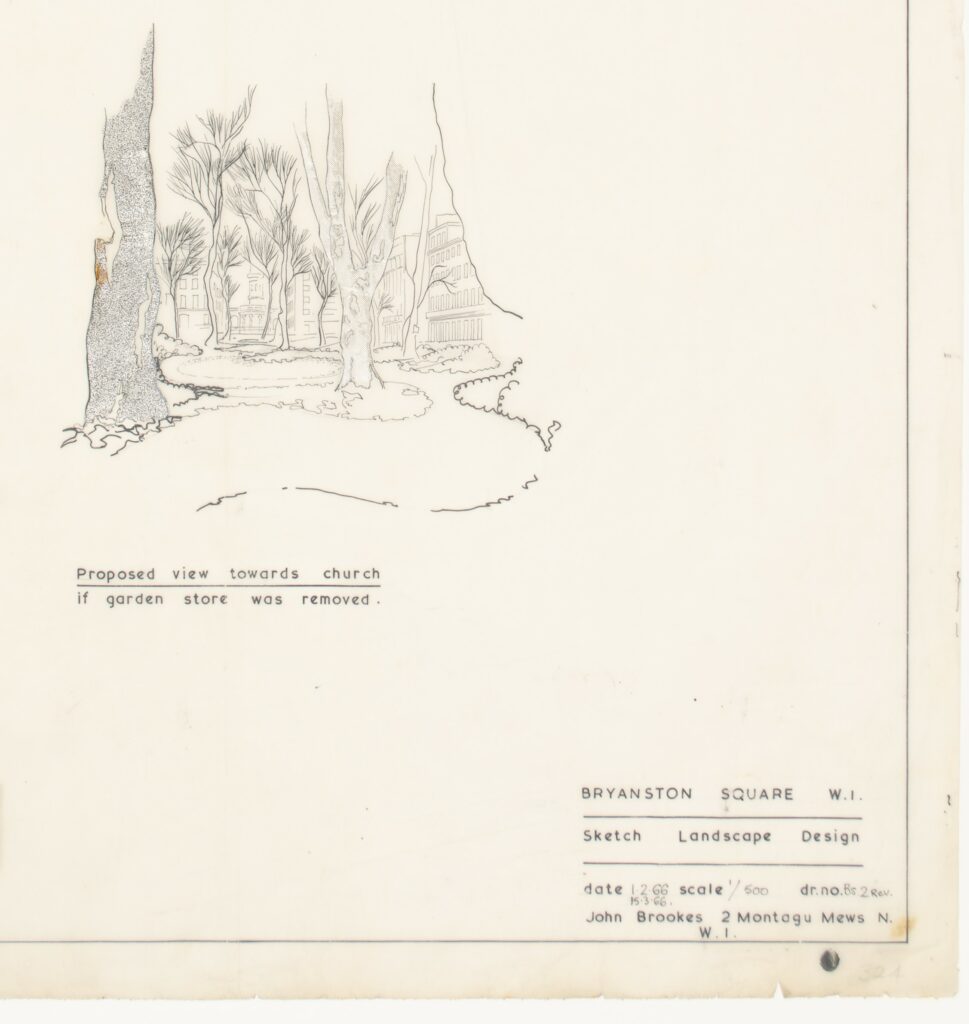 Thinking about how the area would be used, Brookes noticed that it was popular with nannies pushing prams, so decided to create a meandering walk. The swirling geometric forms of his design, which would have been interesting when viewed from above, pay homage to his hero, the Brazilian artist and landscape designer Roberto Burle Marx.

Gravel paths wind through areas of lawn and trees, with dappled sunlight shining through the leaves of the original London plane trees. Brookes’ annotations show areas reserved for grouped seating, where residents could relax and enjoy the views.

He positioned flowers at the margins due to the lack of sunlight; ‘The object of the planting was not to produce a flower garden but a green one with points of colour emphasis’, Brookes wrote. 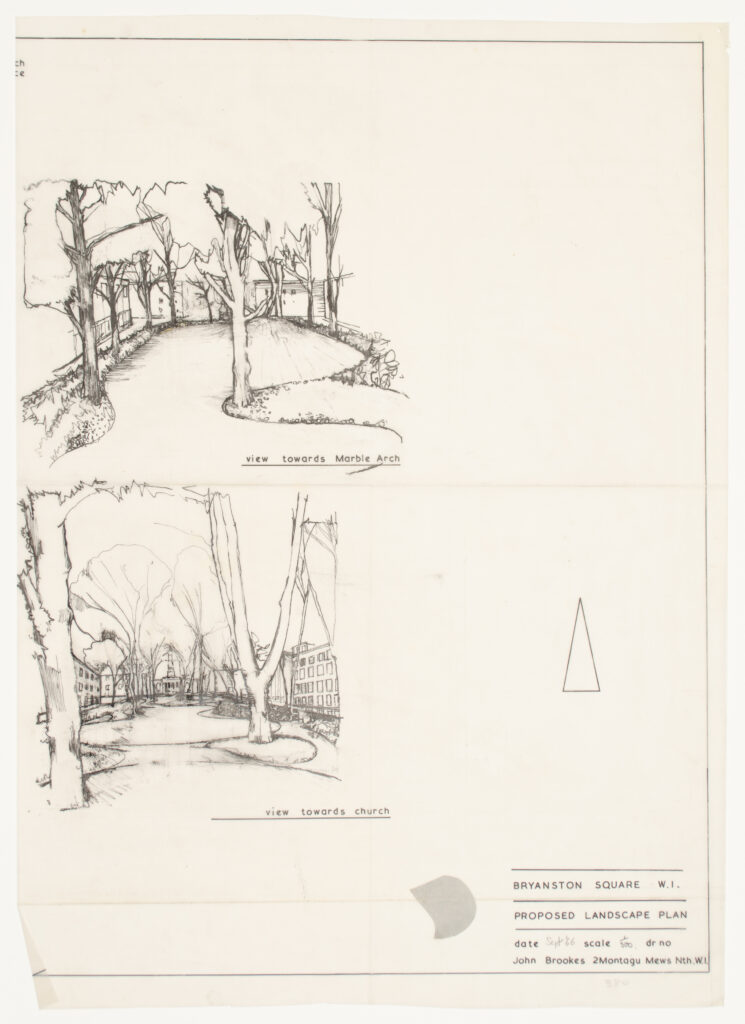 He formed mounds using pulverised fuel ash, an innovative material. The different levels would have added a feeling of space and depth to the small, enclosed area. 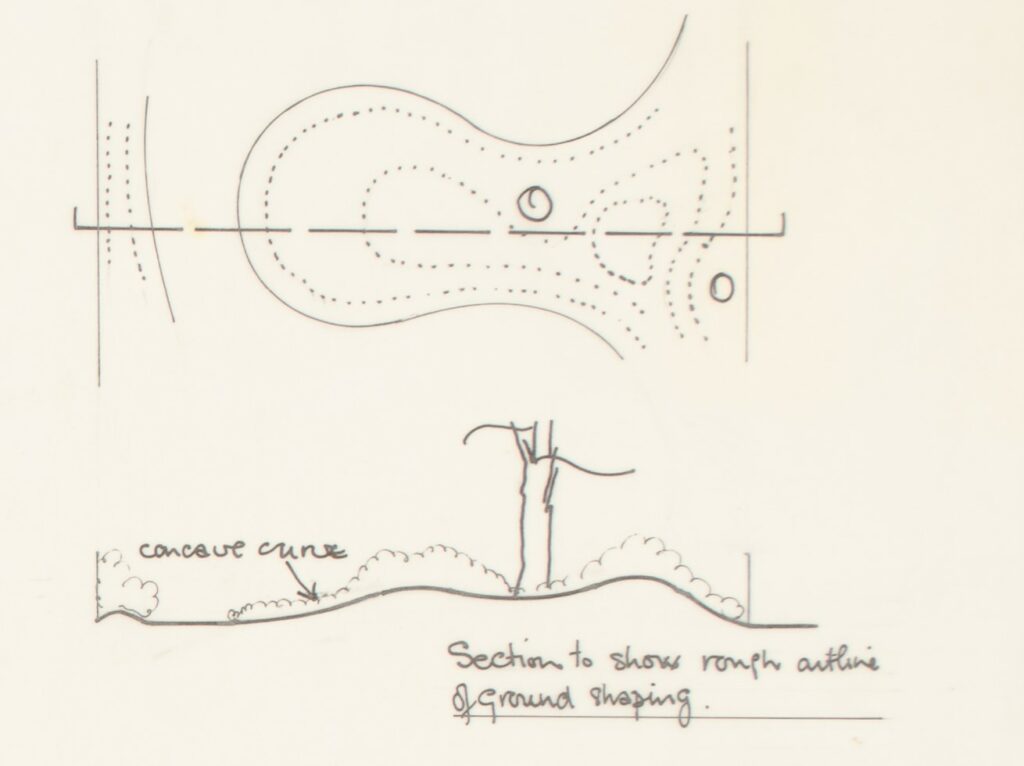 Although the garden committee accepted Brookes’ design and it was executed as planned, sadly it no longer survives. Brookes recalled ‘I moved out of London and the next thing I heard was that they didn’t like the wiggly paths and they’d straightened them up again!’ Nevertheless, Bryanston Square was one of his first major projects. His innovative design represents a bold Modernist intervention in a traditional city space, and is perhaps his purest homage to Burle Marx. We are very glad he chose to deposit his archive at the Garden Museum where his drawings will be preserved for posterity and made accessible to researchers.

John Brookes at Denmans on Vimeo