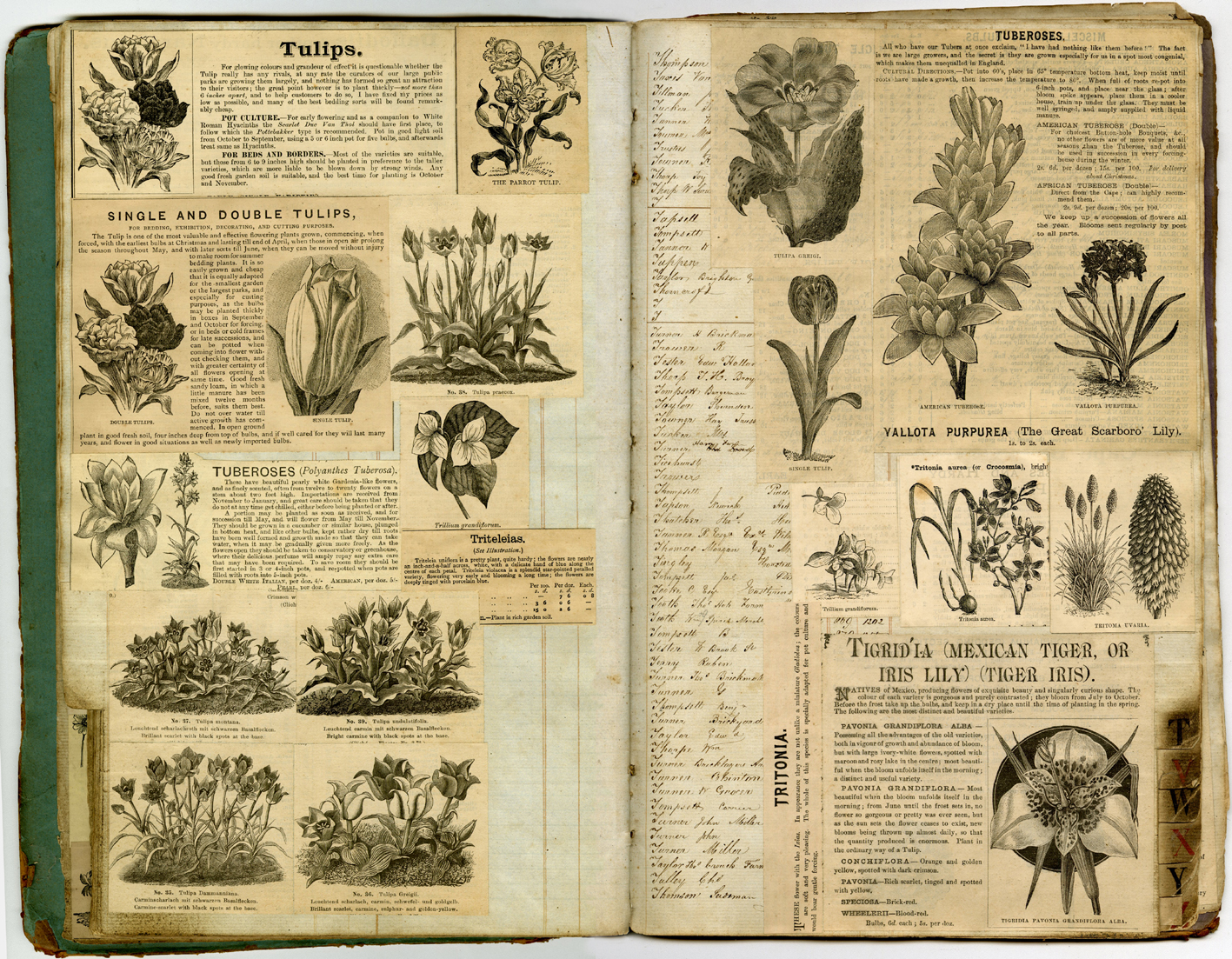 Illustrations of Bulbs, Flowers, Roots Etc.: A Treasure from the Elphick’s Archive

The Elphick & Son Ltd Archive is the subject of our next Museum Journal, going to print as I write. The Elphicks were the ‘Seedsmen of Lewes’ and their shop sold ‘everything for the garden’ from 1823 until closure in 2003. The archive contains everything from eye-catching catalogues to seed packets and paper bags all bearing the Elphick’s logo, photographic prints by celebrated photographers Charles Jones and Edward Reeves, local newspaper articles that give context to the company, copper-plated printing blocks for the production of catalogues, and scoops of all sizes used to measure seeds at the counter of their shop on the High Street. Whilst researching the archive, one item in particular caught our attention – a scrapbook. What we found inside puzzled and intrigued us.

Anthony Elphick was the fifth generation of his family to run the Elphick’s business, and in 2003 he offered to donate their archive to the Museum. One of the items in the collection was a very old and tatty scrapbook titled Illustrations of Bulbs, Flowers, Roots Etc.

When we looked inside, the alphabetical tabs down the right-hand side suggested it might be some kind of encyclopedia. The letters of the alphabet seemed to correspond to the illustrations of bulbs, flowers and roots cut out and pasted inside: from A for Anemones through to Z for Zephyranthes.

We began to spot some clues about the origins of the illustrations. One insert was from a W. B. Hartland & Sons’ advert from 1904, showing that the drawings of flowers were ‘made by Gertrude Hartland, and engraved by Welch, of London’. Elphick’s had their own set of engraved printing blocks, giving details of flowers and vegetables. 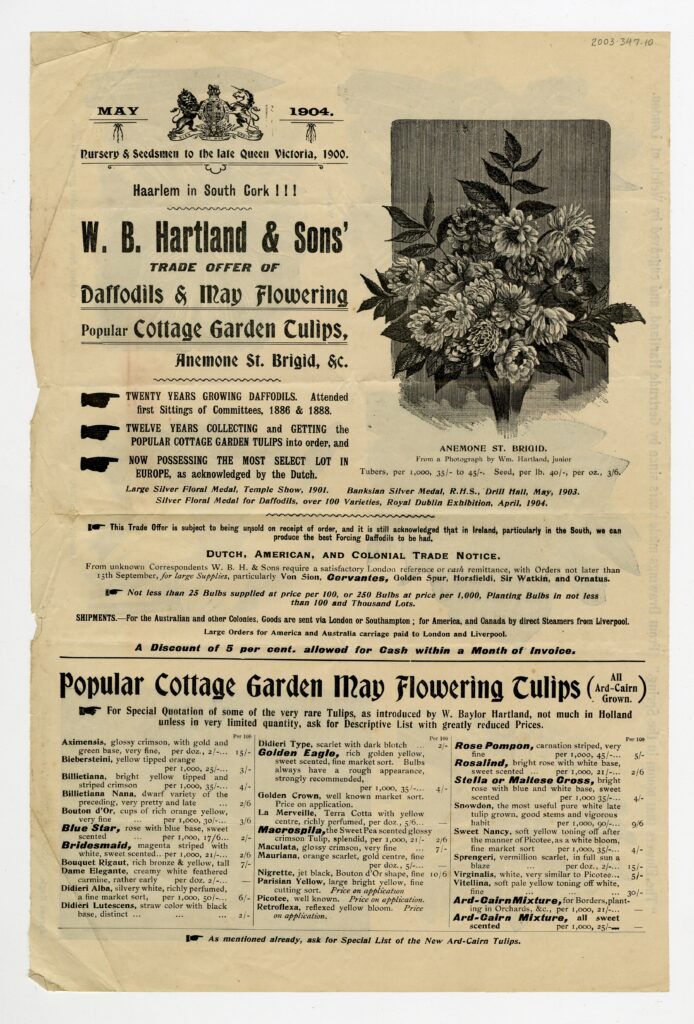 Some of the illustrations in the scrapbook had been cut out and pasted onto front covers of attractive catalogues, made from card. Dates on the catalogue covers told us the period in which the scrapbook was being used for this purpose. 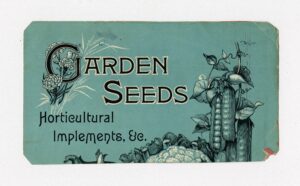 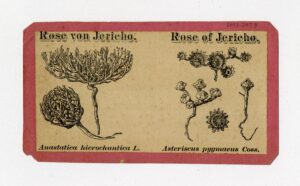 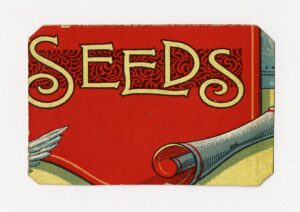 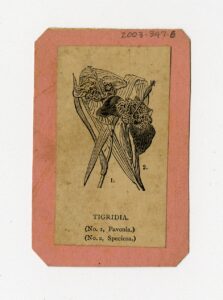 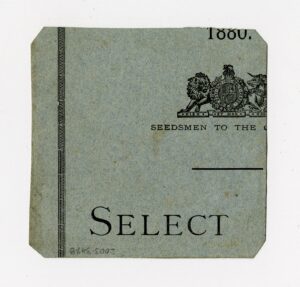 We now knew where the illustrations came from, and that they dated between 1880 and 1890, but what was the purpose of the scrapbook? We asked Anthony Elphick and he explained that in the early days of the company, before Elphick’s produced their own catalogues, staff and customers would use this scrapbook as a reference tool to show what seeds were in stock and what flowers they would produce. The condition of the scrapbook, being so well-thumbed, shows how often it was used. Naturally, we were very pleased to find that Tradescantia featured. Some pages contained additional information, such as desired planting conditions, and, as the images of hyacinth vases below suggest, how to effectively display them.

But the scrapbook had former life, we realised. Look closer, and under the stuck-in prints are lists of names. The ledger was first used to list customer order records, and when searching a client’s name online, we discovered he died in 1858, giving us a rough date for when the ledger was in use. Names, occupations and addresses are listed, revealing the wide range of customers that Elphick’s served. Customers came from all over Sussex, including Ringmer, Falmer, Brighton, Eastbourne, Worthing and many more surrounding towns and villages, as well as from London.

The huge variety in their occupations suggests that the appetite for gardening in the 19th century crossed classes: from the Fourth Viscount Gage of Firle Place and the ‘Hon Earl Sheffield’ of Fletching, to Dr Richardson, Reverend Simpson, Mr Boon the butcher, Mr Hill the baker and Mr Weller the cabinet maker. We noticed that while many of the artists who produced drawings for the catalogues were women, there was only one female gardener among the clients listed, Mrs French from Malling Street in Lewes; it was very rare for a woman to be a professional gardener at the time.

The scrapbook in the Elphick’s archive therefore has a double historical significance; the ‘encyclopedia’ shows us how a seed merchant functioned before producing their own catalogues and what sort of seeds they stocked, while the ledger reveals information about the huge variety of customers that Elphick’s served, and their geographic reach. It would have been easy to overlook this tatty scrapbook when selecting items for permanent preservation in the Archive of Garden Design. Luckily, its value was recognised and we are now able to add this historical context to the collection.

If you want to find out more about the Elphick & Son Ltd. Archive, look out for our next Museum Journal, coming soon!