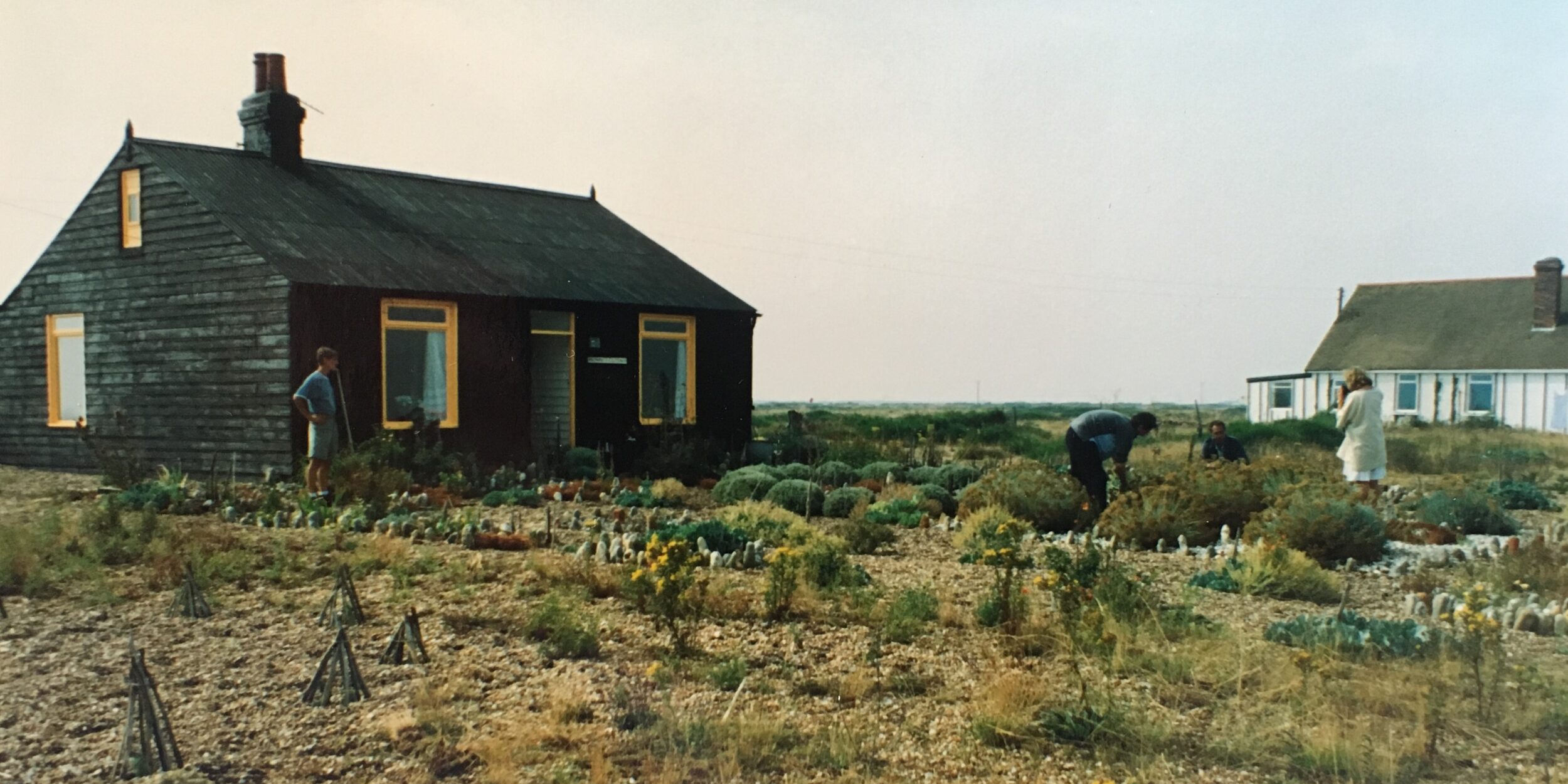 Shaun Kiddell, Parks Policy Advisor at National Lottery Heritage Fund, shares his memories of visiting Derek Jarman at Prospect Cottage in the early 1990s, along with his own photographs from that day:

I have a very fond memory of being very fortunate enough to visit Derek in his garden at Prospect Cottage, Dungeness. Although the memory of that wonderful afternoon is crystal clear, and I can recall that it was a hot sunny summer Saturday, I am slightly unsure of pinpointing the exact year. It may have been the summer of 1991 or 1992. 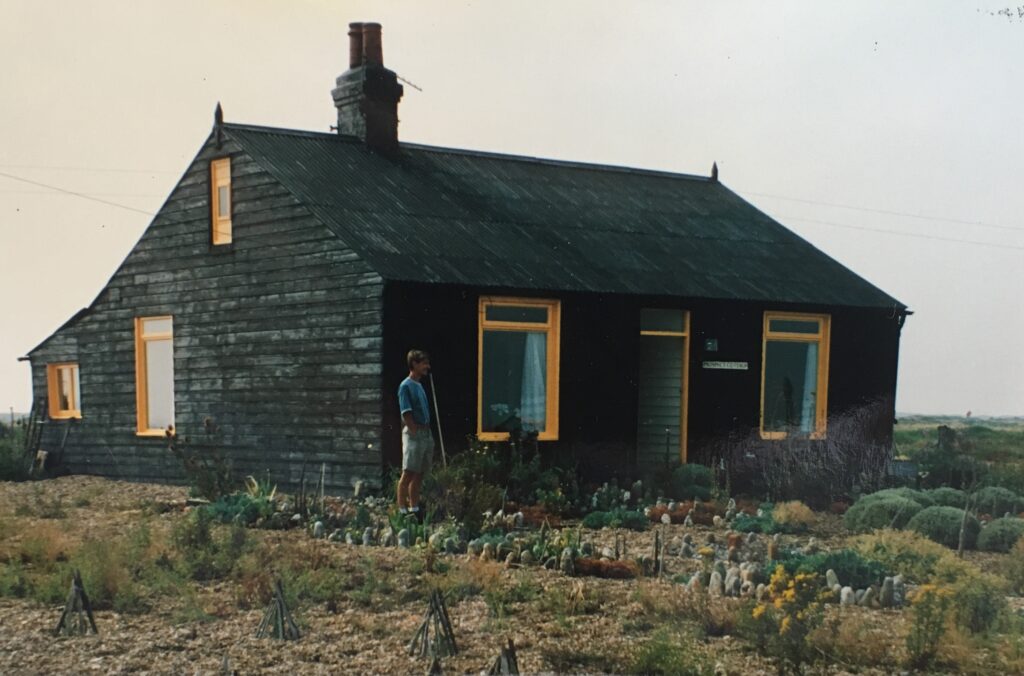 Derek’s movie The Garden had recently been released, which had shot Derek’s beachfront hideaway to fame.

Following the release of the movie, Jarman fans, movie buffs and of course us fellow gardeners were keen on a pilgrimage down to this odd little corner of Kent. To find this extraordinary garden surrounding his neat little cottage, nestled among the shore-lined shacks on a weird, lonely desolate beach-side location under the shadow of the imposing Dungeness power station.

To me, Dungeness was, and still is, quite unlike anywhere else in Britain. At that time in the early 1990s it was widely thought of (though later disproved) to be England’s only piece of official desert. And back in those days Prospect Cottage stood out more than it does today, as every other property on the strip was much more ramshackle and there used to be far fewer people around.

Back to that sunny Saturday. I happened to be staying at Sissinghurst Castle Garden with my friend Graham Harvey who was a gardener there. He lived on the estate in the former shepherd’s cottage, that sadly is no longer in existence. 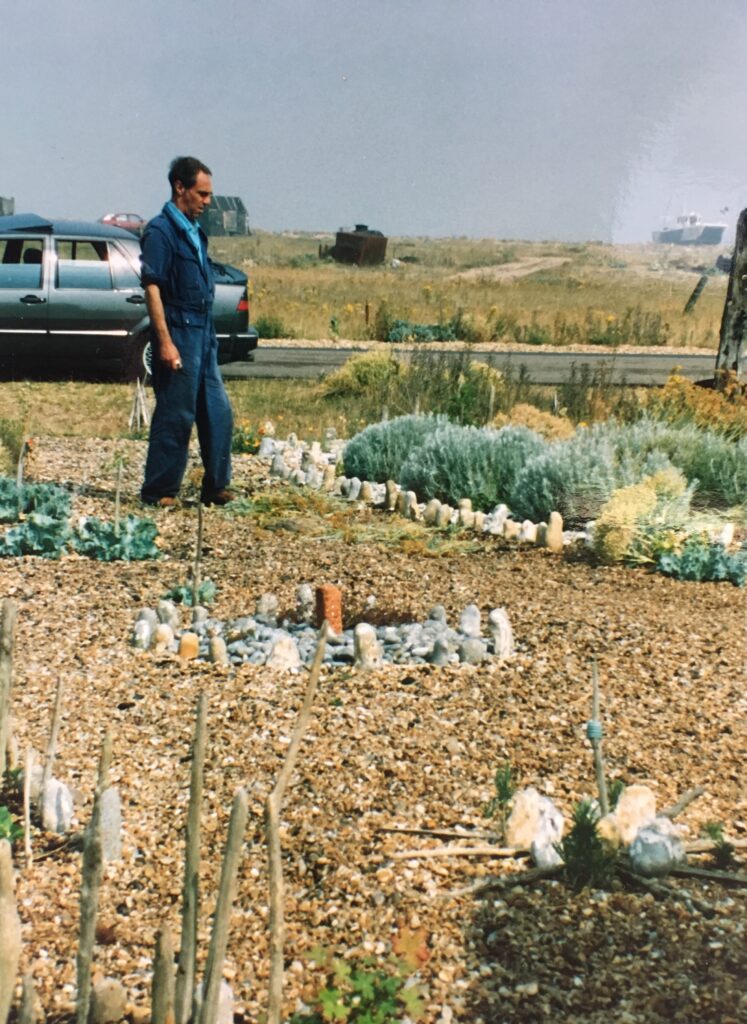 We arrived at Prospect Cottage to find Derek trimming the deadheads off and re-shaping his cotton lavender with a lovely old fashioned pair of wooden handled shears. He was genuinely pleased to greet us and was interested in us both being gardeners. He also seemed a tad impressed Graham worked in the gardening team at Sissinghurst. Derek recounted that he knew he would receive many more many visitors once his garden was featured in his movie.

I have a great collection of photographs from our encounter. Not only did I still have hair back then, being only about 25, but the photographs capture Derek and his friend, those lovely wooden handled shears and how low the garden planting was back then. None of the height that the shrubs have more recently given the plot. We so enjoyed talking plants, gardens, gardening.  He also recounted to us receiving a dressing down for introducing non-native flowers he liked, that some thought would invade the local area and seafront.

The cottage was a little different back then. The windows in the cottage had a large single pane with just a top opening, the poem on the side was yet to exist. The garden as you would expect has changed a little in the 30 odd years I’ve known it. 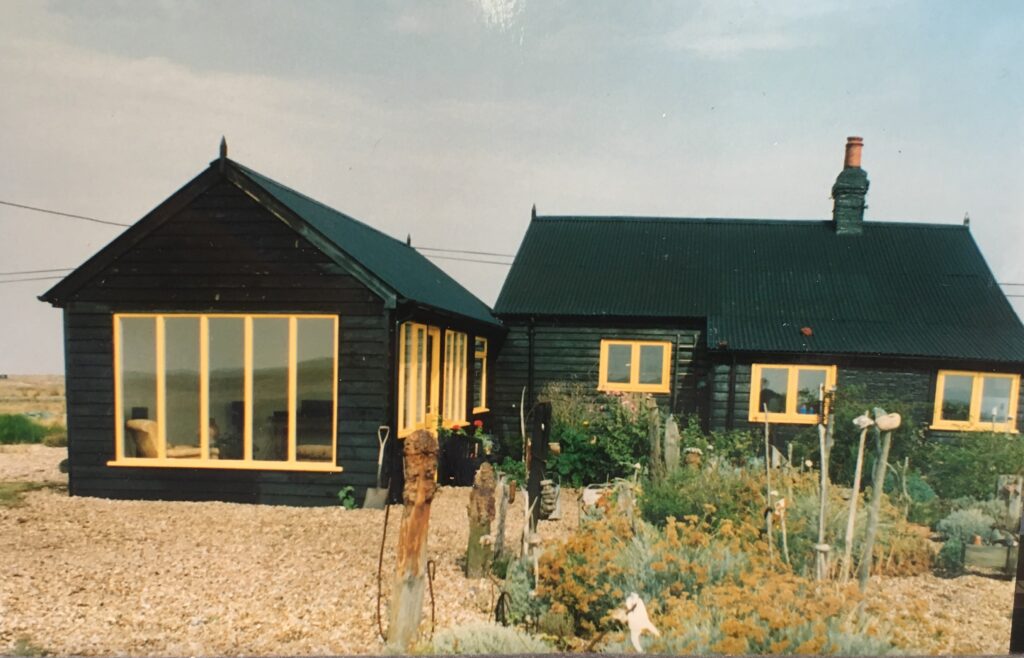 My early photographs reveal few simple beds on the frontage and intricate patterns and designs from artifices, stones and shells. My guess is many of those have most likely been lost to trophy hunters and souvenir collectors. I’ve also seen maintenance vary over the years, but the essence of remarkable artistic man remains.

Derek graciously showed us round, and by coincidence a lady photographer also parked up at the same time and began to photograph the garden. This lady turned out to be the fabulous garden photographer Tommy Candler, who went onto become a friend and came to photograph me at Heathfield, a country estate close to Croydon that I was restoring soon after the Prospect Cottage meeting. 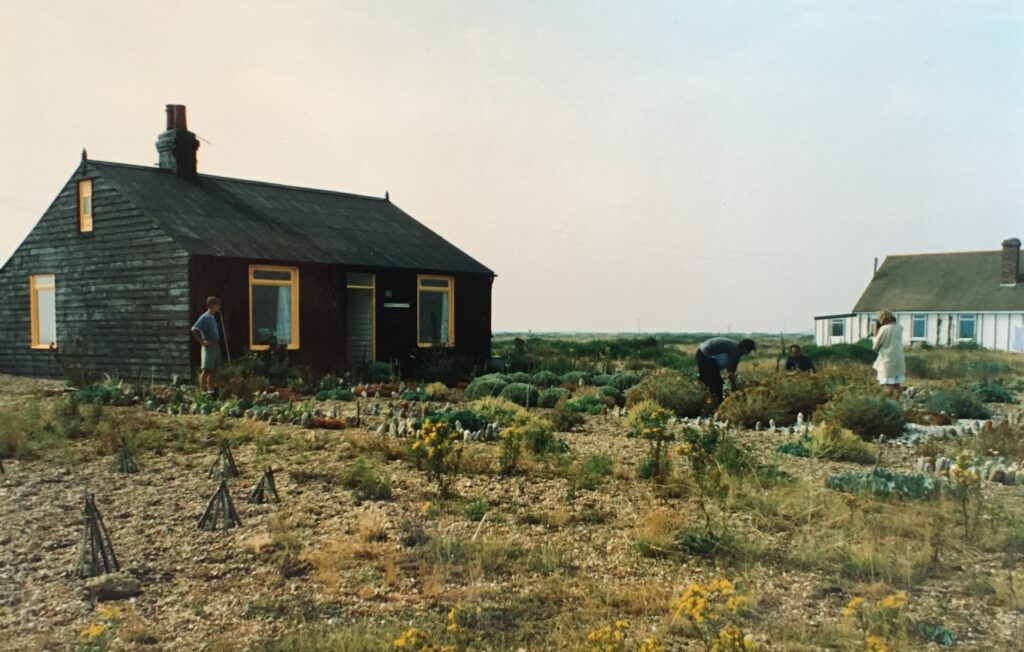 I’ve been very fortunate to visit Prospect Cottage almost every year since meeting Derek way back all those years ago. I’ve also been very fortunate to see many many shingle and dry gardens, many artist creations, yet none of them ever compare to the romance and uniqueness created by Derek at Dungeness. I’m so very proud to be part of the organisation responsible for preserving Prospect Cottage, being the parks and gardens person at National Lottery Heritage Fund, and our parent the National Heritage Memorial Fund, that generously joined forces with the Art Fund to secure the future.

Shaun Kiddell joined the then HLF in March 2013 as the Parks Policy Adviser. Shaun started his career in formal horticulture at the RHS’s School of Horticulture at Wisley, followed by a scholarship on Tresco in the Isles of Scilly. More recently he undertook a post graduate diploma in the Conservation of Parks and Gardens at the Architectural Association.

Prior to joining HLF he spent several decades heading up Local Authority Parks and Greenspace services in three London authorities (Croydon, Lambeth and Camden) as well as several years working for The Royal Parks.

Shaun formerly chaired the council the Council of the London Parks and Gardens Trust and has been a Green Flag Judge for over ten years, assessing the quality and sustainability of parks and Greenspace. He has also served on the Board of Trustees of Greenspace, the national charity that worked  to improve parks and green spaces.

Between leaving local authority and before joining HLF, Shaun undertook a seven month world tour of parks and gardens, visiting over 330 parks in more than 26 destinations. Here he was fortunate to meet up with many park managers with responsibility for some of the world’s finest parks.

In 2016, Garden Museum Director Christopher Woodward spent a day in London parks with Shaun to find out more about his work: read The Telegraph article here

Derek Jarman: My Garden’s Boundaries are the Horizon is open at the Garden Museum until 20 September. Book tickets here