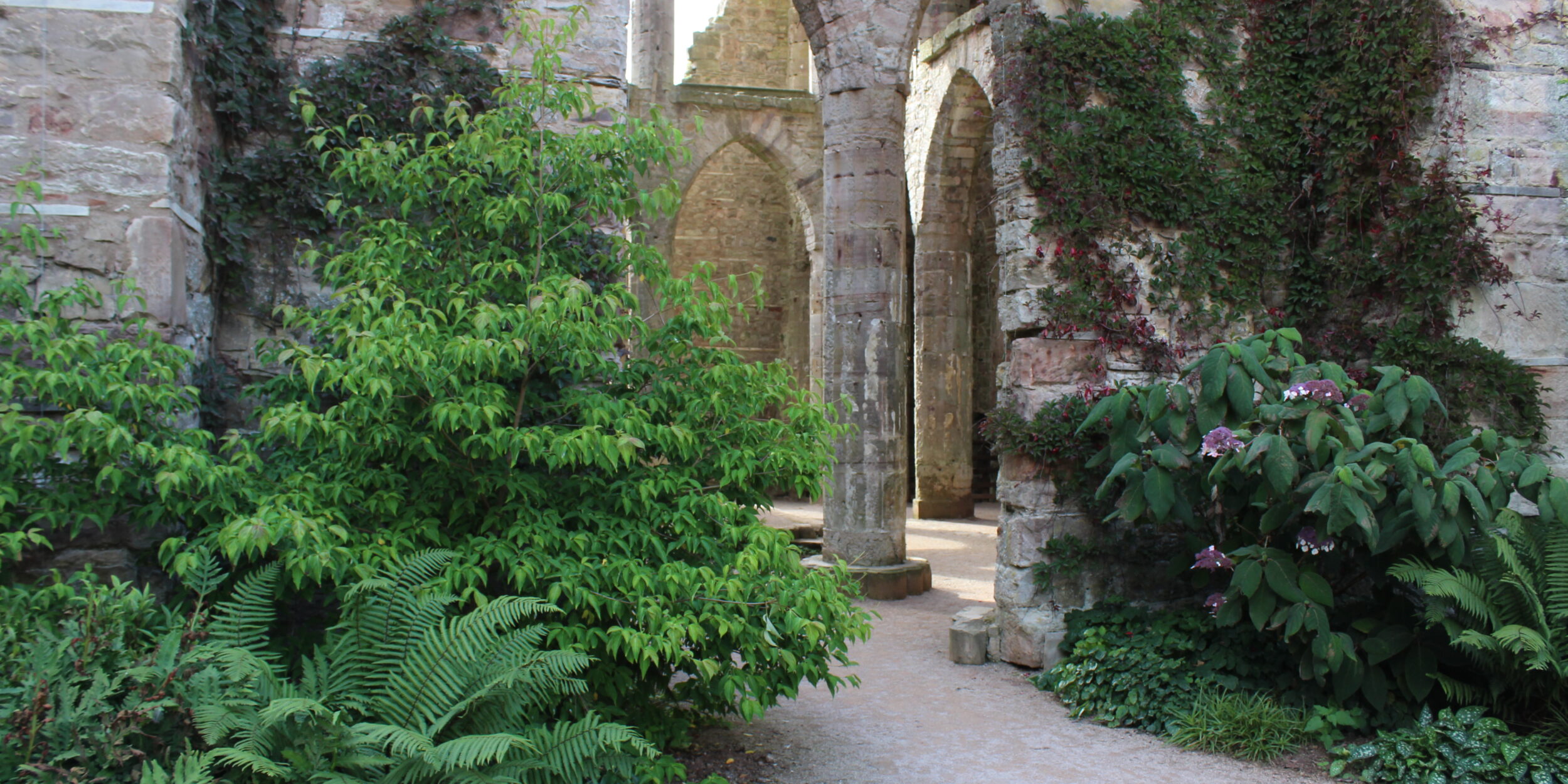 Home > News > Gardening amongst ruins: A visit to Lowther Castle

Gardening amongst ruins: A visit to Lowther Castle

As part of the Horticultural Traineeship at the Garden Museum, Thomas has the opportunity to work with experienced gardeners across the UK. This traineeship has been generously funded by The National Gardens Scheme and the Museum’s Friends Group in Leicestershire and Rutland. 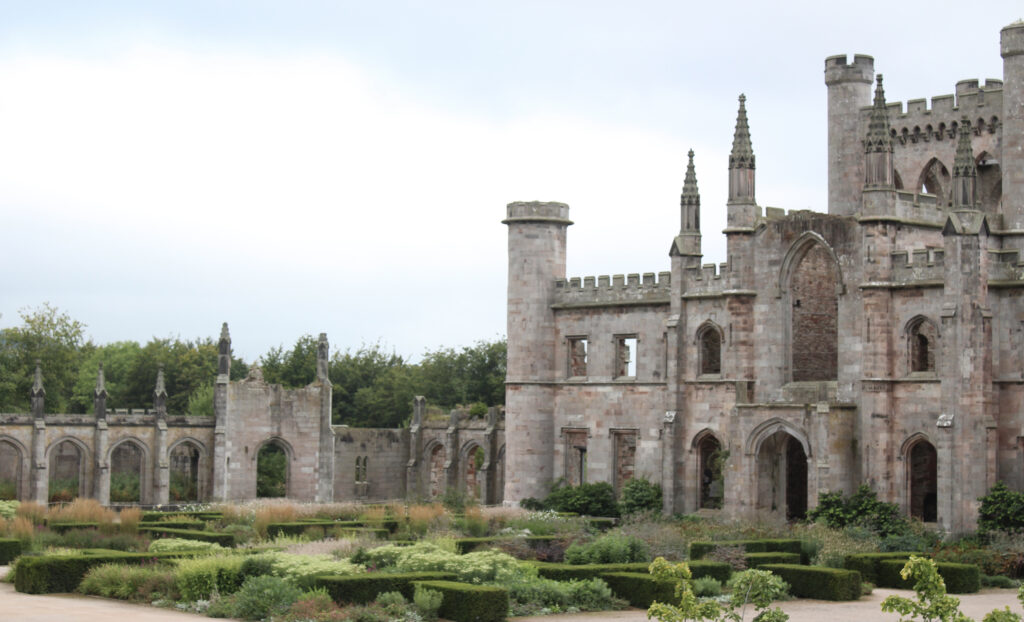 Earlier this month I made the long drive North from London to Cumbria to spend a week working with the gardening team at Lowther Castle. The tarmacked tentacles stretching out from London seemed to go on and on, but eventually, motorway turned to single lane, snaking through valley and along hillside.

Lowther Castle occupies a majestic spot, gazing out to the Lowther Valley and the mountains of the Lake District beyond. The Castle was built at the turn of the 19th century, but the site has a fascinating history dating back to 1150 and the Vikings, with the word ‘Lowther’ believed to come from Old Norse for ‘foaming river’. The River Lowther is but a skipped stone away.

The Castle has undergone something of a renaissance in recent years, having fallen into disrepair in the first half of the 20th century, as so many other large country houses did. Its demise was expediated by the Yellow Earl, Hugh Lowther (who founded the Automobile Association, now the AA – known for its yellow logo), the last Lowther resident. He was a spectacular spendthrift, eventually leaving the Castle empty in 1936. For over 50 years Lowther Castle was largely undisturbed and ignored, save for an invasion of Spruce trees, and the farming of pigs and chickens.

Since 1999, however, the Lowther Castle & Garden’s Trust has sought to regenerate the site. As part of this plan, Dan Pearson has worked with the Lowther Team to design and implement a rethinking of the gardens and grounds.

On arrival, Lowther Castle’s Head Gardener, Martin Ogle, kindly gave me a tour of the grounds. What struck me was the sheer enormity of the place. Standing inside the garden-in-the-ruins, seen here, in what would have been the library and billiard room, the gothic shell reaches up and up. And Gothic it is, all turrets and towers and pointed arches, silhouetted against the grey sky beyond. Within the ruins there is much space, particularly vertically, to enable the planting to take over. The vigorous Chinese Virginia Creeper, Parthenocissus henryana with an attractive scarlet red glow climbs and climbs, as does Jasminum officinale ‘Clotted Cream’, with charming yellow star-like flowers.

Time was spent training a rose around a part of the old castle wall, battling against thorns at height with Helen, a member of the gardening team. Scratched and pricked but perfectly awake (no fairy tale slumber to contend with, although this would seem like the place for it) we then went to see the orchard, with hundreds of apple & pear trees grafted by the gardening team a few years back.

I was lucky to spend much of my remaining time in the Parterre Garden, one of Lowther’s main attractions, seen here. The Parterre Garden is found in front of the castle, with small, enclosed gardens in a grid formation, enclosed by yew hedging and perennial planting such as Calamagrostis ‘Karl Foerster’ and Anemone X hybrida ‘Honorine Jobert’. The tapestry-like design is, of course, sensitive to the spirit and history of the grounds. It is a melding together of modern planting woven with and contrasted against glimpses of old formality.

The ritual of cutting back of spent Astrantia major a reminder of the ending of the season soon to come, however, at the time of my visit, both the Nepeta govaniana and Potentilla nepalensis ‘Miss Willmott’, seen below, were in fine form. The creamy-yellow flowers of the Nepeta govaniana were new to me, with a unique smell of both lemon and vanilla combined. I became mildly obsessed, so much so that the team kindly sent me off with a small plant that has been divided. It thankfully survived the drive home. Finally, Rosa omeiensis pteracantha, seen below, must be mentioned, for those unique crimson thorns which took on a ruby-glow in the sun.

On my final day, we spent time in the recently planted Rose Garden, also designed by Dan Pearson. The concentric circles mimic the cross-section of a rose, with the beds representing unfurled rose petals. Thousands of roses have been planted in recent years, with too many to name. The old favourites Rosa ‘Munstead Wood’ and ‘Scarborough Fair’, both shrub roses, were looking particularly rosy, although I tend to prefer the yellows and oranges of Rosa ‘Charlotte’ and ‘Lord Penzance’. Dead heading is no small task here, although the smell makes the job rather a meditative one, along with the sound of water from the fountain, and the hum of small insects. Lowther Castle is a very special place indeed.

To read more about Lowther Castle or to plan a visit for the coming year, visit lowthercastle.org, or to keep up to date with goings on in the gardens visit the Lowther Castle Instagram.