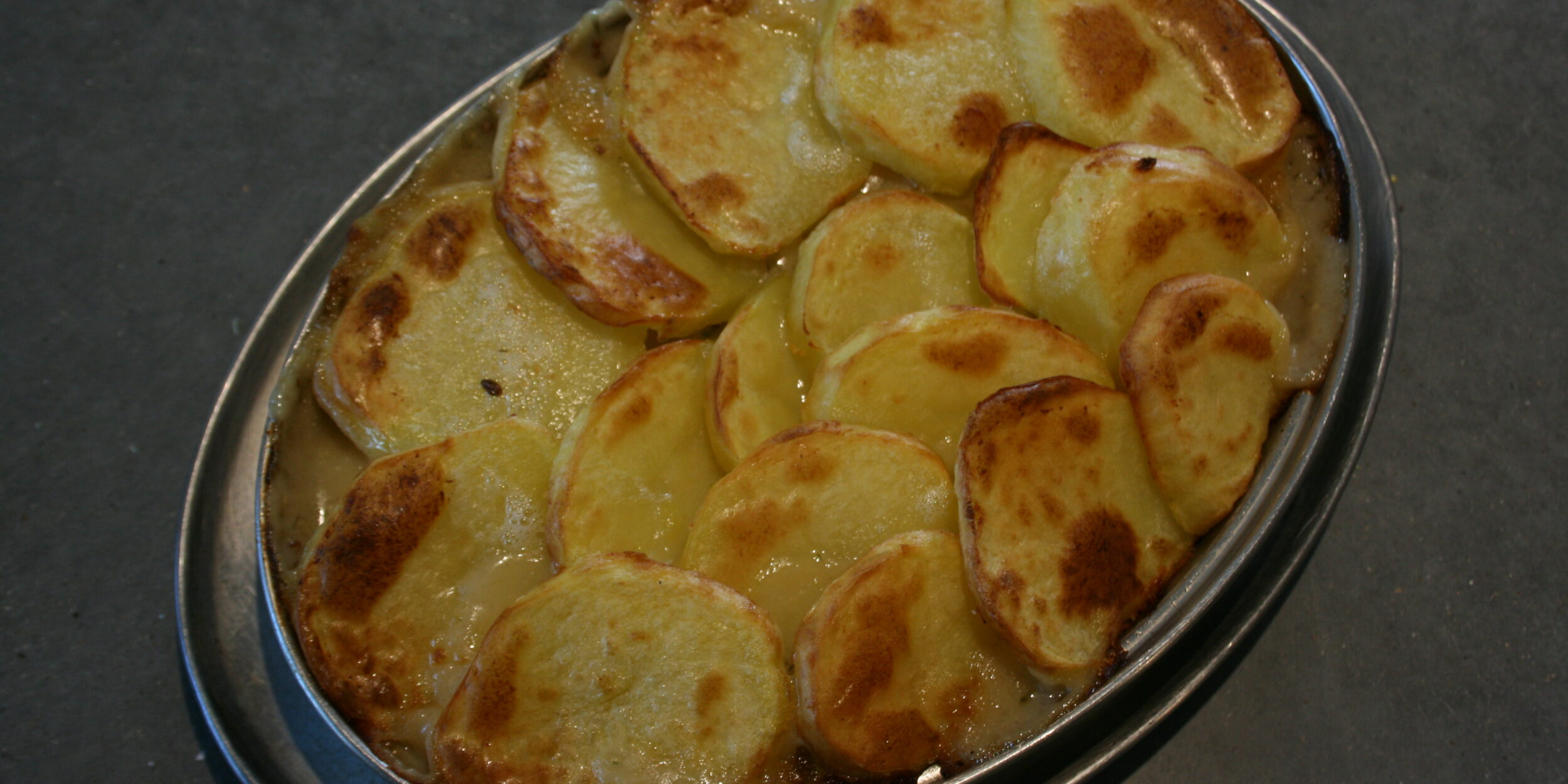 I feel like there is a danger in taking on the writing of a recipe for a dish like fish pie. You are moving in a realm of cooking that I suspect, for many people, is deeply rooted in nostalgia. People’s relationship with the dish runs deep; anchored in my case in the formative years of my childhood and visits to my grandparents in Somerset. A man used to drive into my grandparents’ village, on a weekly basis, in a small van loaded with treats of the sea from the nearby coast. I remember that well. I then also remember, vividly, the fish pie that followed. It is, to be quite honest, the only fish pie that I can remember and it will remain as my reference point to this quintessentially British dish for, probably, the rest of my life. I have a feeling that there are a lot of people who have a similar history with it, hence why I see danger in writing this recipe. Call me brave or perhaps stupid but here is the Garden Café’s version of fish pie. It is not intended to usurp the fish pie that sits steadfastly in your own memory; as we all know that nothing can. 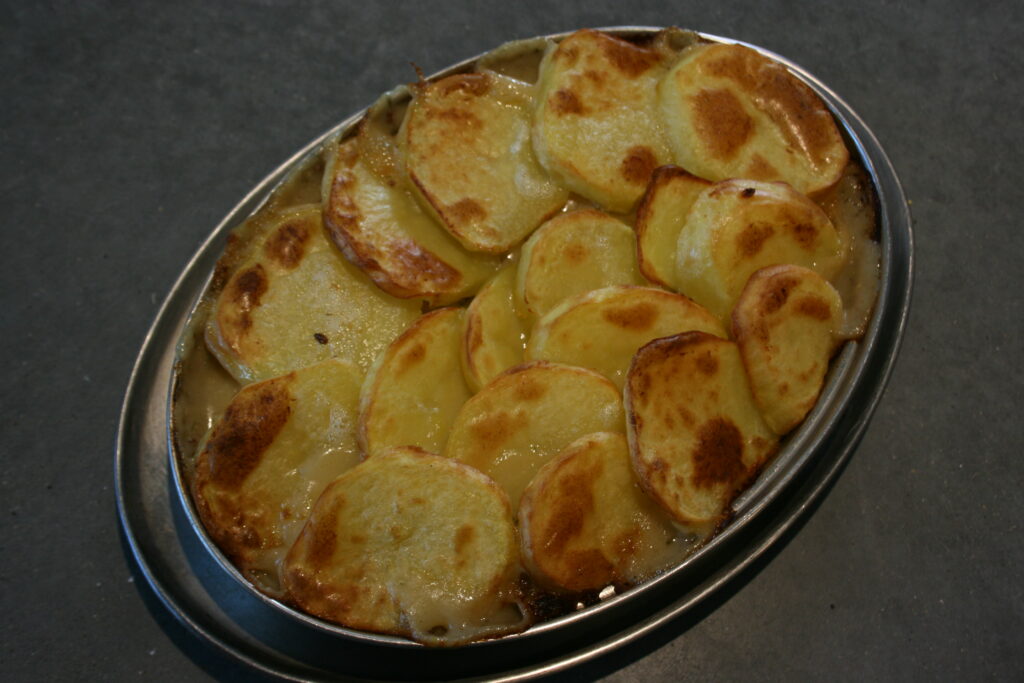 The first thing we need to do is poach the smoked haddock in the milk. By doing this we get all that lovely smoked fish flavour into the milk which then goes on to make the base of the pie. So, in a suitably sized pan put the milk, bay leaves, a teaspoon of whole black peppercorns and the smoked haddock. Set the pan on a medium heat and allow it to come up to a simmer; once it has reached this point turn the heat off and leave it for half an hour or so.

Whilst this infusion of flavours is taking place in that pan you can start on the next step of this journey; opening and picking the mussels. Give the mussels a rinse under cold water and discard any that are open and don’t close when tapped gently. Take a pan – one which has a lid – and place it on a high heat. Once the pan is hot add the mussels and a splash of water and cover with a lid. Cook on a high heat for about 2 minutes, giving the pan a vigorous shake after 1 minute. Check that the mussels are open – this is the sign that they are cooked – if they are not open yet then continue to cook for another minute or so. Remove the mussels from the pan onto a plate or bowl and allow to cool slightly before picking the meat from the shells. Be careful when doing this to remove what is known as the ‘beard’. This is the bit which connected the mussel to the rope on which it was grown; it looks a bit like beard hair. Put the mussel meat in the fridge until later. 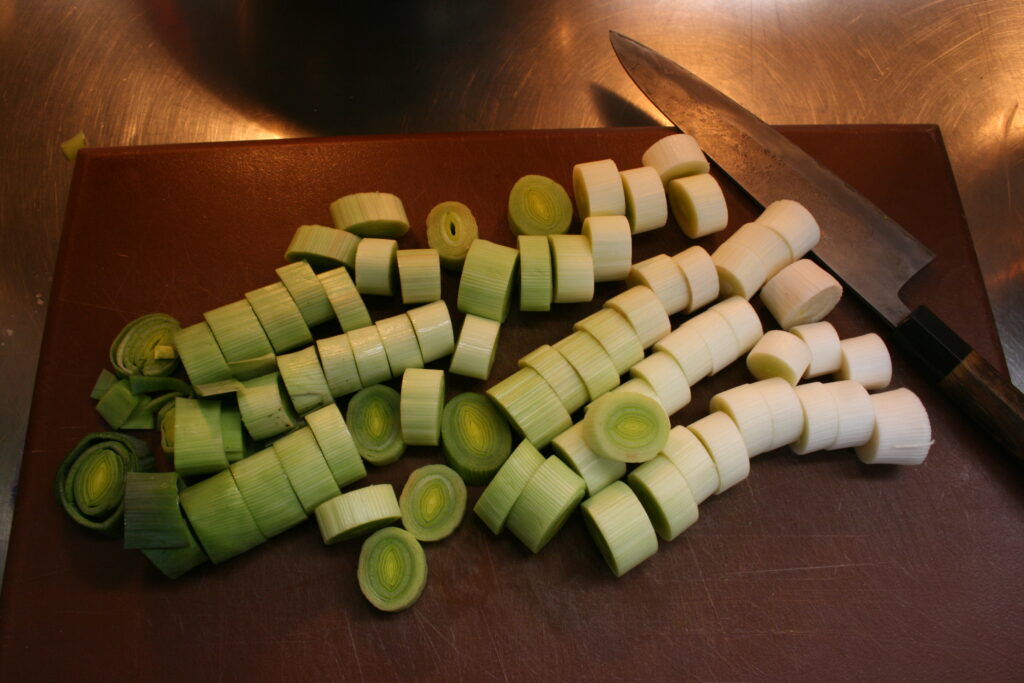 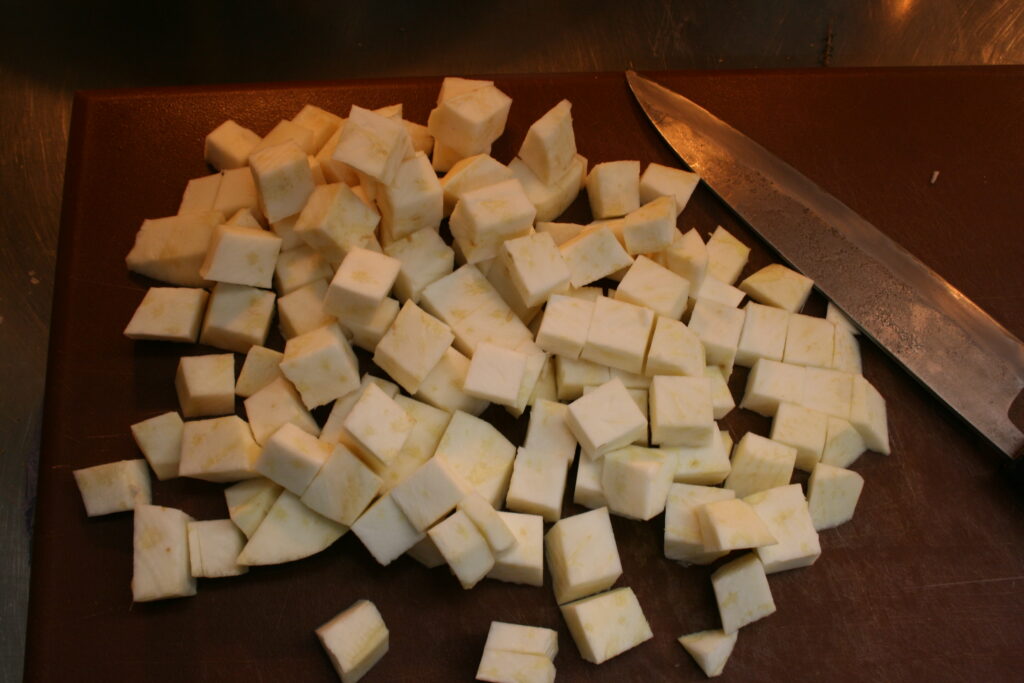 Peel the outer leaves from the leeks, give them a good wash and then cut them into chunky discs, about half an inch thick. With a sharp knife peel the skin off the celeriac and then dice it into small cubes about the size of a dice. In a large pan, over a medium heat, melt the butter and add the celeriac with a pinch of salt and a couple of grinds of black pepper. Let the celeriac cook with a lid on, stirring very regularly, for about 5 mins – if it starts to colour a little bit this is fine but if at any point it looks as if the butter is taking on too much colour then turn the heat down and add a splash of water. After 5 minutes or so add the leeks and continue cooking in the same way for a further 4 minutes. 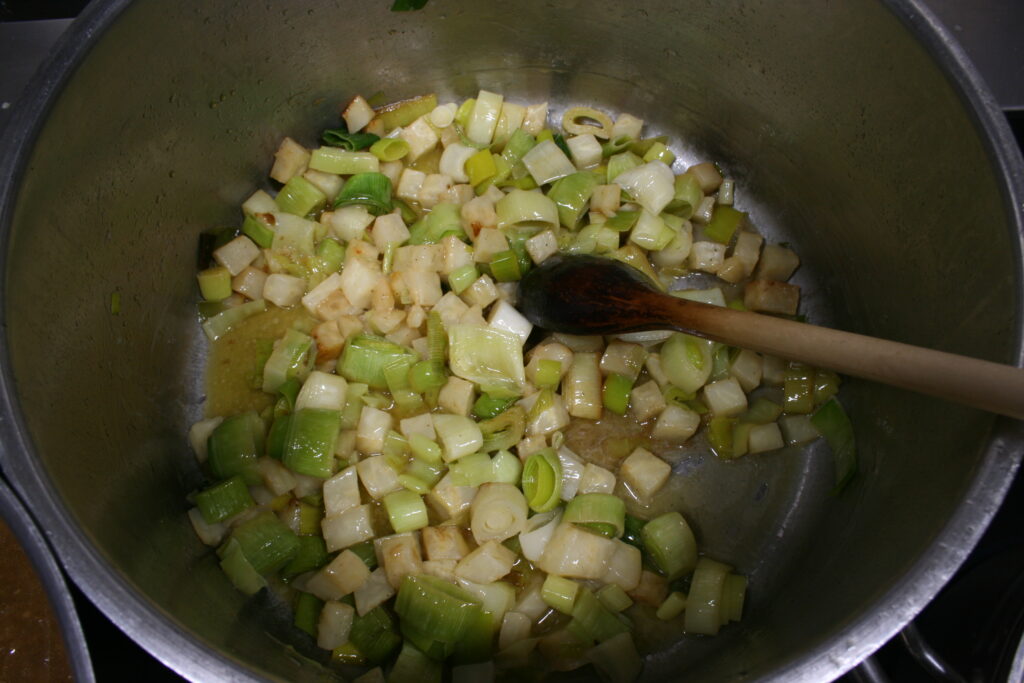 Meanwhile remove the smoked haddock from the liquid it was poached in and then pass that liquid through a sieve into a pan and bring it up to a gentle simmer. Returning to the other pan, the leeks should now be softened and, along with the celeriac, providing a wonderful base for the dish. Add the flour, give it a good stir and cook it out over a medium heat for about 3 minutes. Keep stirring it so the flour doesn’t burn. Then add the hot smoked haddock milk, a third at a time. As you add the milk keep stirring and you will see that quite quickly the flour will thicken the milk. Once all the milk is incorporated allow the mix to cook on a low heat for about 10 minutes. Then remove from the heat and leave, with a lid on (this will stop it from forming a skin), to cool.

IMPORTANT INFORMATION: This pie does not have a mash potato lid! I know that what follows in this paragraph is highly controversial, but bear with me; it is a nice little twist. Peel the potatoes and, leaving them whole, add them to a pan and cover with cold water. Add a couple of good pinches of salt and bring the pan up to the boil. Turn the heat down and simmer until the potatoes are cooked. It is important that you do not over cook the potatoes as we are slicing rather than mashing them; they need to be holding their shape. Drain them from the water and let them cool slightly before slicing across the potato, into discs that are about the thickness of two pound coins. 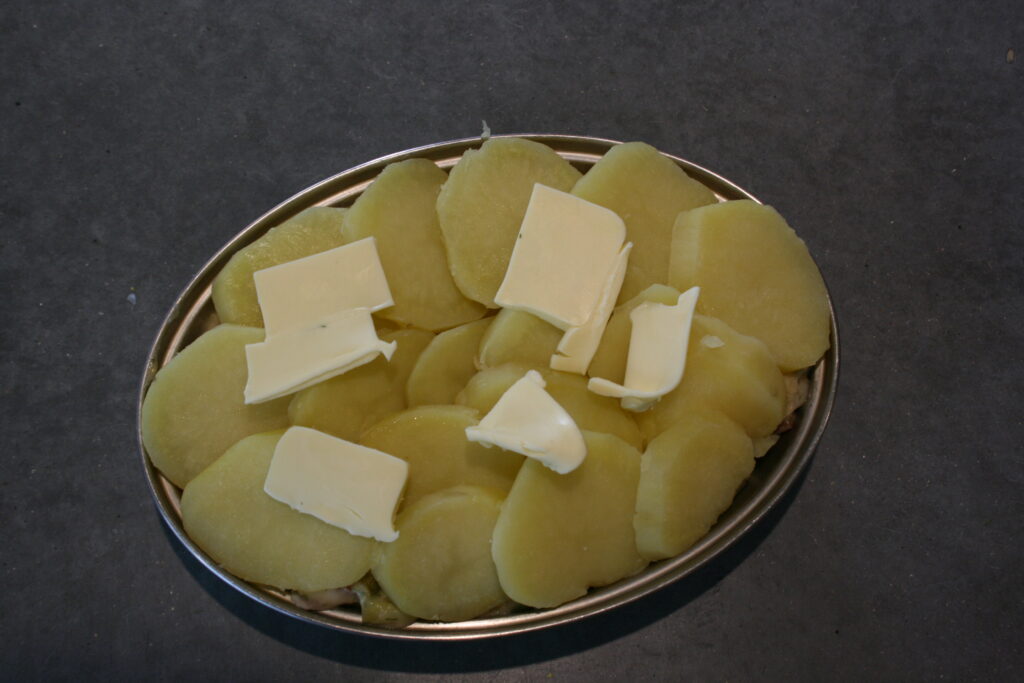 Remove the skin from the smoked haddock and flake the flesh into the pan with the leeks and the celeriac. Then add the mussels, the diced fish, the mustard, the dill and the zest of half of the lemon. Give everything a good stir, being as gentle as possible; you don’t to ruin all that lovely fish with a heavy hand. Check for seasoning and adjust if necessary. Tip the mix into your pie dish and spread it out evenly then dot the quartered hard boiled eggs on top of it. Then arrange the slices of potato across the top to form a lid. Let them overlap slightly with each other – they should bear a subtle resemblance to a fish’s scales. Scatter a few small knobs of butter on top of that and then bake in the oven for about 30 minutes until the potatoes are turning golden brown and the inside is bubbling. If you have any fondness for the inside of your mouth, then I would let the whole thing cool slightly before eating. Enjoy! 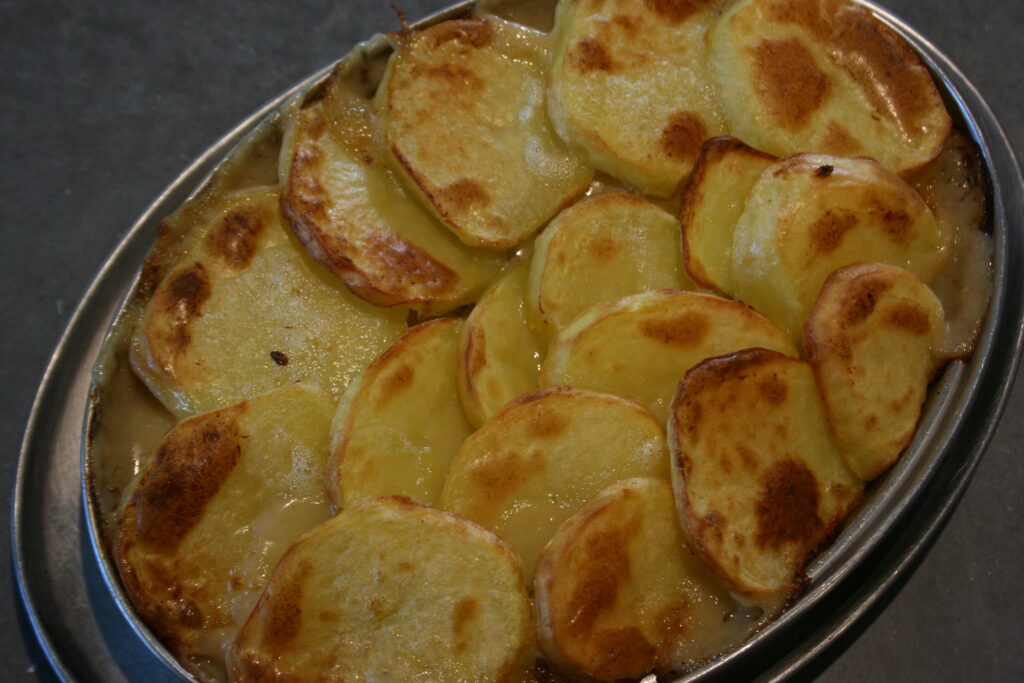 The Garden Café is open for takeaway and delivery Thurs – Sun, 9am – 3pm: see this week’s menu and order online