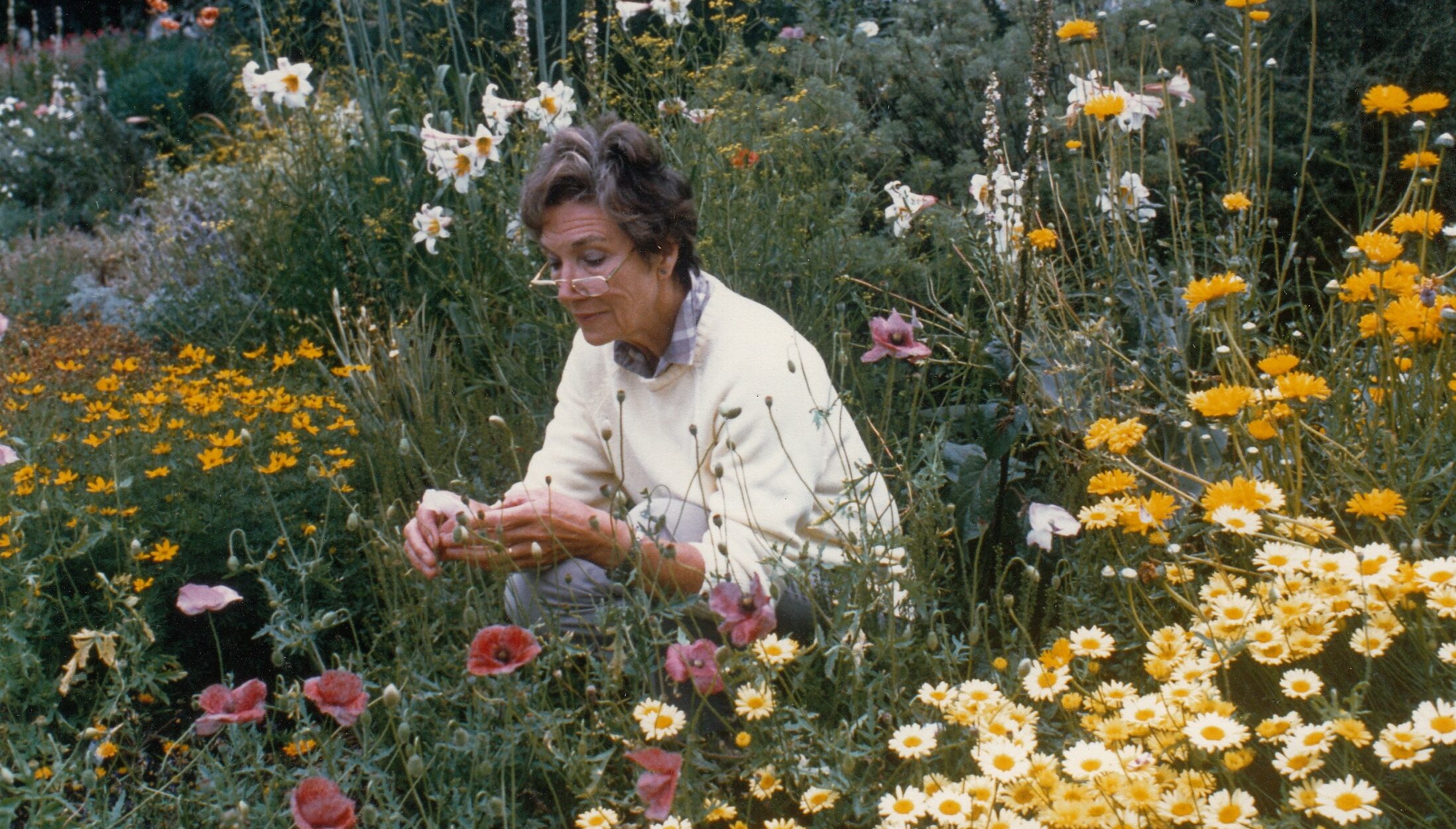 Beth Chatto has influenced and inspired thousands of people through her gardening and writing. This exhibition, which took place in the Autumn of 2008, explored the story of the gardens that she began to create around her newly-built home in 1960. Working on the principle that garden plants grow best when placed in conditions closest to their natural habitats, she looked for plants suited to the varying conditions of her uncultivated soil and the very low rainfall in her local Essex region.

Three very distinct gardens gradually emerged: Water, Gravel and Wood. Since 1967 Beth has also had a plant nursery next to her house, specialising in the sale of unusual plants. It was as a nurserywoman that during the 1970s and 1980s she created some of the most exceptional and artistic displays at the Chelsea Flower Show.

The exhibition looked at the interwoven development of Beth’s gardens, nursery and public role, and considers her influences, creative processes and sense of design. It also suggested some of the personal strengths and talents that guided Beth through a range of life roles, and the qualities that have made her a hugely respected gardener and a greatly loved friend.

Beth believes that plants are universal. She says that there is no such thing as a Beth Chatto plant and is reluctant to single out any of the 2000 plants in her nursery as her favourites. Yet she does acknowledge that there are strong associations between certain plants and the gardeners who have championed them. Her own nursery grew out of the plant collection of Cedric Morris and many plants still remind her of him.

Beth Little married Andrew Chatto in 1943. Setting aside a career in teaching, she looked after their two young daughters and supported her husband on the fruit farm he owned at Elmstead Market, a few miles from where they lived in Colchester. In 1960 the family moved to a new house built on the farm itself.

White Barn House, a modest L-shaped home, was carefully positioned in the least fertile corner of the farm, where fruit would not grow. At the rear of the house was a naturally occurring ditch with waterlogged soil. Everywhere else was extremely dry and gravely. It was the least promising of sites for a new garden. Beth, however, saw it as a challenge and began to seek out plants that would grow well in these extreme conditions. Ecological gardening was underway.

Beth received no formal horticultural training and dedicated most of her twenties and thirties to her family and home.  Instead of limiting her career development, Beth believes it kept her mind open and enabled her to gradually become the gardener she is today.  In preparation for this exhibition, Beth wrote a list of the people who have influenced her. First on the list was her late husband Andrew Chatto, a fruit farmer, plant researcher and the grandson of the famous publisher. Second on the list was her late friend Sir Cedric Morris, the celebrated painter, plantsman and the creative force behind the famous gardens at Benton End, Suffolk.

Health problems forced Andrew Chatto to retire early and the farmland surrounding White Barn House was sold in the mid-1960s. For Beth, who was fourteen years younger than her husband, this seemed like the right moment to start her own small nursery business on their remaining land. It was also important financially.

Beth’s ‘Unusual Plants’ nursery at Elmstead Market specialised in the sale of plants not available commercially. These were of course the very type of plants that Beth had spent the previous twenty years investigating and which she had begun to grow in her own gardens. While the dominant fashion at the time was for very colourful cultivars, Beth’s catalogues included a lot of species plants and plants with interesting foliage.  The nursery aisles were arranged according to the preferred growing conditions of the plants, encouraging customers to consider whether their purchase would be suited to their own gardens. This simple statement marked an entirely new approach to buying plants.  Having built up the business by word-of-mouth, in 1976 Beth made a life changing debut at the Chelsea Flower Show.

Beth’s great success at Chelsea in the late 1970s significantly increased public interest in her unusual plants and ecological approach to gardening. People not only rushed to visit her gardens and to buy her plants, but they also wanted to read her books and to hear her speak.

Between 1978 and 1990 Beth wrote five books, appeared on television and gave numerous interviews. In 1983 she undertook the first of five international lecture tours and by 1986 she had won ten consecutive Gold Medals at Chelsea. In 1987 she received an Honorary Doctorate from the University of Essex and the following year was awarded the Royal Horticultural Society’s Victoria Medal, their highest order of recognition. In 2002 she was awarded an OBE.

Beth undertook this new public life alongside all her existing roles. She still had all the responsibility of running a profitable nursery and from the late 1980s she found herself with the opportunity to further develop the gardens. At the same time, there were increasingly pressing family commitments and the demands of a busy home life, which now included six grandchildren.

When Beth decided to run a small nursery business from home, her public and private worlds merged. Her private gardens were quickly absorbed into the public space of the nursery and by the early 1980s her name had become a publiccommodity. Then, with the publication of two books, ‘Beth Chatto’s Garden Notebook’ and ‘Dear Friend and Gardener,’ Beth began to reveal more than just her gardening self.

Here are a few quotes by Beth that were collected and presented during the exhibition:

“The site was wasteland, a wilderness lying between our farm and our neighbours. It consisted of a long spring-fed hollow where the soil lay black and waterlogged, surrounded by sun-baked gravel, situated in one of the driest parts of the country. But it was the extreme variation in growing conditions which intrigued us, the possibility lying before us of growing…plants adapted by nature to different situations.”

“We may have a wider approach to garden design if we have been helped to appreciate other forms of art: to be aware of basic principles – balance, repetition, harmony and simplicity – which apply to all forms of creativity. To look for these ideas in painting and architecture, or hear them in music, has certainly influenced me as much as knowing whether to put a plant in the shade, or in full sun.”

“We all pass on, our gardens change, many disintegrate and disappear. That is not important. What matters is the continuing cycle of sharing and learning about plants, and perhaps a little bit of us remains with our plants…maybe this is another precious thing about gardening.” 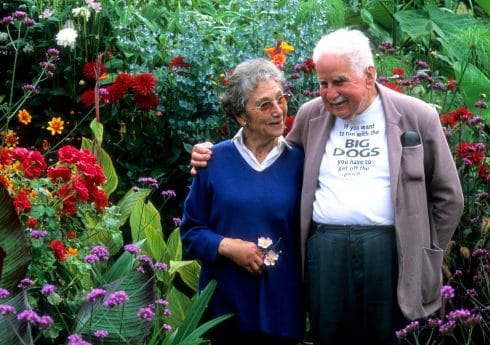 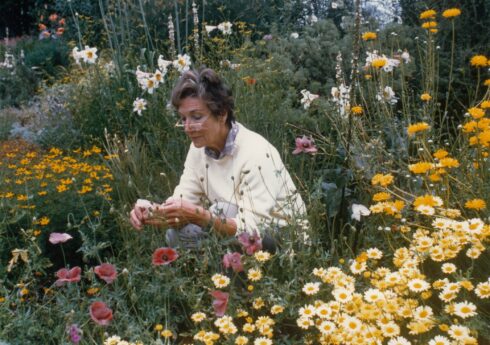