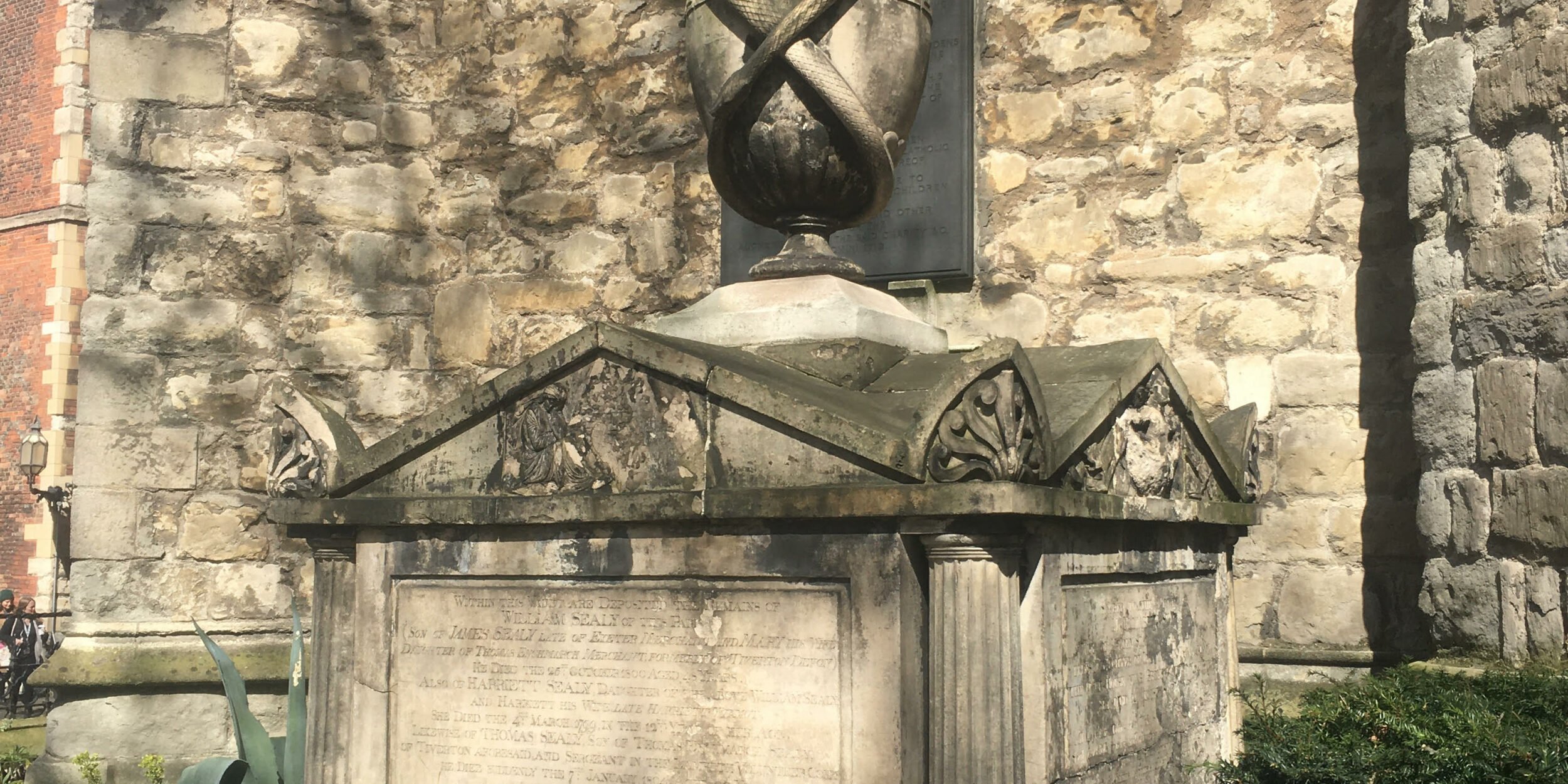 Eleanor Coade and the Sealy Tomb

Eleanor Coade died on 16 November 1821 – two hundred years ago this Tuesday. Her Bicentenary is being celebrated by Historic England, who have published an excellent article which describes her prowess in artistic creativity, but also how she was a pioneer as a businesswoman.

Born in Lyme Regis in 1733, after her father’s failure and bankruptcy Eleanor came to London with her mother and two sisters as a linen draper. Then, in her thirties she acquired the business of Daniel Pincott, a manufacturer of ‘artificial stone’ on the south bank of the Thames, where the Royal Festival Hall stands today. Pincott was one of many who competed to manufacture the best imitation stone ornaments; the competition was as close and refined as the competition is in modern London for, say, tonic mixers or ethical coffee brands. Coade stone won, with a recipe as secret as Seedlip and a process in which the compound was fired in a kiln at 1,100 degrees centigrade for several days. (The formula was secret until the 1980s, that is, when scientists worked it out, as Historic England describe)

Coade’s catalogue offered 700 off-the-peg supplied standard products such as doorcases or the urns you see in many gardens. However, it was proudest of its creation of one-off designs, such as the colossal sculpture iterating the death of Nelson in the pediment of the Royal Naval College. My own favourites are the two beardy caryatids supporting the doorcase of Schomberg House on Pall Mall. I never knew they were Coade. And that’s the point. Eleanor’s moulds were so finely made that the sculptures appear to be carved with a chisel.

The neo-classical aesthetic was of flawless perfection: as embodied by sculptors such as John Flaxman, a statue must be as still and smooth as ice; in architecture, the façade a seamless robe in which the joints between stones are imperceptible. Mrs Coade’s products chimed with this sharp aesthetic.

The church of St Mary’s at Lambeth – now the Garden Museum – is good for Coade-spotting. Outside the Archive of Garden Design is a statue of a schoolboy which originally stood on the porch of the Lawrence Charity school at Lambeth Green. It was modelled by Coade’s artistic partner John Bacon or, perhaps, John Flaxman: Coade commissioned the best sculptors of the day. The tomb of Captain Bligh is also of Coade stone.

But our greatest pride is the tomb of her cousin John Sealy, who became her partner in 1799, and whose name was inscribed next to hers in their gallery which stood beside Westminster Bridge. Eleanor was a Nonconformist, unmarried, and was buried in Bunhill Fields in an unmarked grave.

John, however, was buried with his family at St Mary’s, in a tomb to your left as you walk into the churchyard from the forecourt of Lambeth Palace. The first occupant was his wife Elizabeth, who died in 1806; later, John, his brother, William, and sister-in-law, Harriet, with their children Harriet and Thomas, along with five other family members.

We do not know who designed and sculpted the tomb, but it was in the avant-garde taste of the Greek Revival: since the 1750s scholarly Grand Tourists had travelled beyond Italy to examine the works of the Greeks, and at the turn of their century their work was believed to be ‘purer’ than that of the Romans. Four pediments enclose a cube sacred with inscriptions to the family; on top, a symbolic urn is entwined with a slithery snake; a snake eating its own tail is an ouroboros, a symbol of eternity which can be traced back to ancient Egypt. The columns at each corner are Doric, and without bases, a variant derived from Greek examples. And in each pediment is a sculpted scene of mourning. Who designed or sculpted the tomb? We do not know, but it is one of the first Greek Revival monuments in London, and listed Grade II* in its own right. 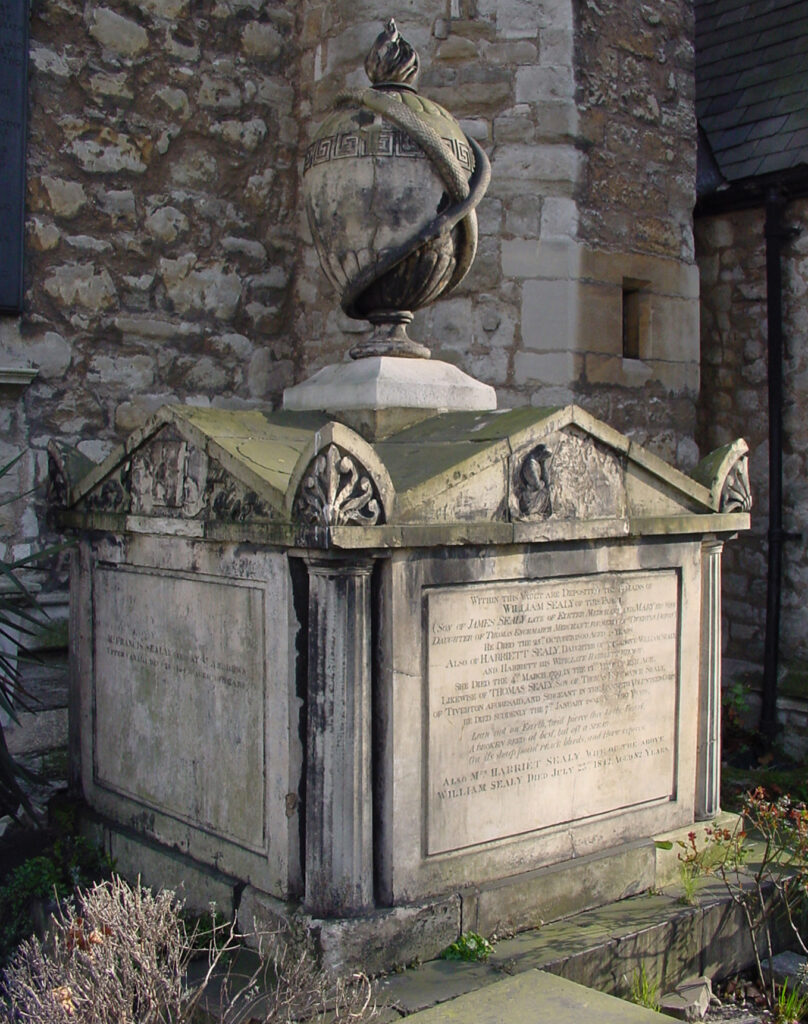 And it is at risk owing to decades of traffic pollution: the plaques are as black and fragile as cold, burnt biscuits. Under the pediments, the chemical deposits have collected in fistfuls. Now that we have finished the restoration of the church – and please note the lamps at the gate-posts have been lit again, thanks to The Heritage of London Trust – the consolidation of the Sealy tomb is our priority.

The remarkable Pilgrim Trust have funded a study by Cliveden Conservation, whose expertise in Coade includes restoring the one-armed Druid in Priory Park, Chichester. The cost to preserve the Sealy tomb without further loss of sculpture is £14,000 and we have allocated a generous donation left to us in a Will of £3,000 from a Friend (whenever we receive a legacy we try to put it towards something of lasting value to the heritage we care for). For the remainder we are applying to architectural conservation charities.

But even in its blackened state, the tomb of the Sealy family is a handsome thing: please look next time you visit.