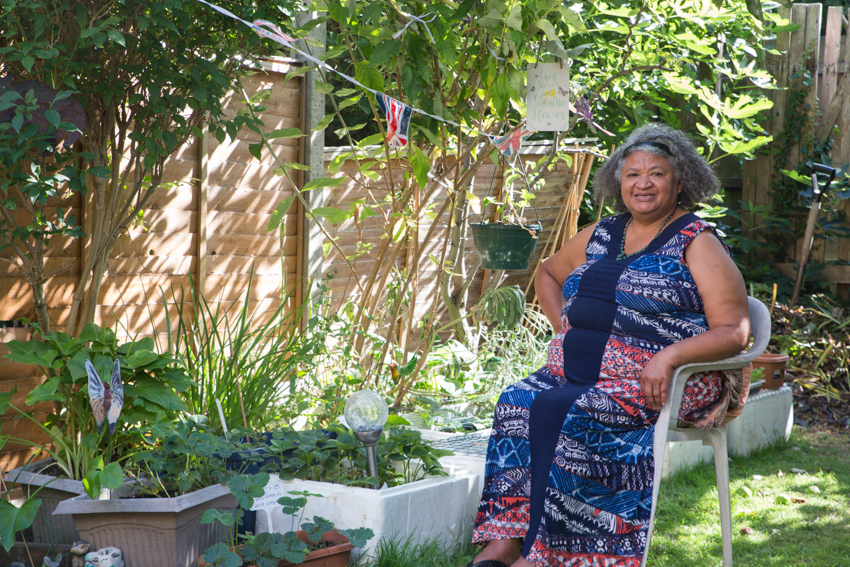 Home » News » Earline Hilda Castillo Binger: Caring for plants is a way to care for people too

Earline Hilda Castillo Binger: Caring for plants is a way to care for people too

The Museum has received funding from the National Lottery Heritage Fund for a project to record and celebrate the gardens made in south London by members of the Windrush generation. Janine Nelson, our Head of Learning, visits Earline Hilda Castillo Binger at her garden in Herne Hill.

It is Hilda’s 70th birthday this week, 18th November. She was planning a birthday celebration with her gardening group which due to lockdown may not now happen. I cycled over to say hello to her and drop of a gift. It’s was my 3rd visit to her house in Herne Hill this year.

Hilda came to England on 11th April 1971 to train as a nurse. She had been attracted to the States but her Uncle warned her off as being ‘too dangerous a place’ in the 1970s for the youngest born  of her family to go. Born in the village of Rancho Quemado, deep south in the Caribbean island of Trinidad, Hilda had 11 older siblings. Her parents separated when she was 8 and she went to live with her grandmother for a while and then an older sister. After her school studies she decided that she wanted to be a teacher and taught privately; ‘I am still in touch with those young men’. She  was involved with her local church’s community events and then became interested in nursing.

After arriving in England, Hilda began her training to become a nurse. She met her husband-to-be, Earl, in 1973. Once qualified, she worked full time as a midwife for over a decade. When her first son was born she became a Health Visitor. Then from 2000 she worked as a Specialist Nurse Counsellor assisting children and adults with Sickle Cell/Thalassaemia across three south London boroughs. She continued to work full time whilst bringing up two sons and also caring at different times for her father and her mother. She finally retired from the NHS in 2010 after 39 years service thinking that she would have more time for travelling and spending time with her husband.

However, through her involvement in the Expert Patients Programme (a self-management course for people with long term health conditions) at Lambeth Walk GP practice, she was invited to take part in a project the Museum began in 2010: a small garden in partnership with patients. Hilda still gardens there, and it’s become part of a network of food growers at GPs in the Borough, the Lambeth GP Food Co-op. Next she  became a Master Gardener (a Garden Organic initiative) taking part in a buddying scheme which took her to conferences including annual trips to Garden Organic’s base in Coventry.

Earlier this year the museum received the funding from the National Lottery Heritage Fund for a project to explore the gardens made in south London by members of the Windrush  generation.

I asked Hilda if we could photograph her in her south London garden back in July. Her son, Peter, who lives with her, had just turned 30 and as he had become a keen gardener (especially under lockdown) we photographed him as well. Next year sixth form students will conduct interviews with the participants and will be kept in our archive as oral histories. 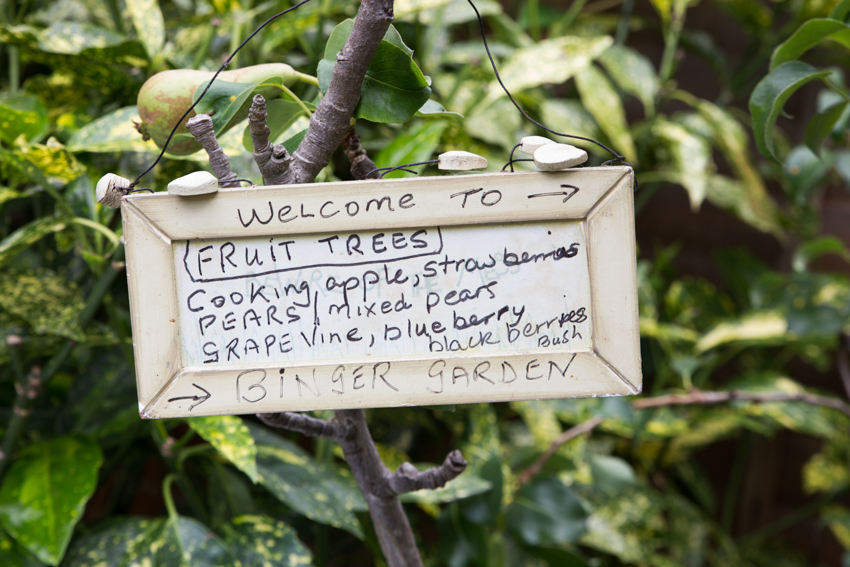 I cycled over on 4th July and met the project photographer, Ingrid Guyon, at Hilda’s home in Herne Hill, which is just down the road from Brockwell Park. The weather was showery and not particularly warm.

Walking through the alley to reach Hilda’s side gate to the back garden, what struck me immediately was how alive the garden was, bursting with plants in every corner, on every window sill, in various stages of cultivation, with labels (often humorous), bunting and quirky decorations. Many of the plants seemed to be edible. I sat at a garden table to chat whilst Ingrid unpacked her camera. 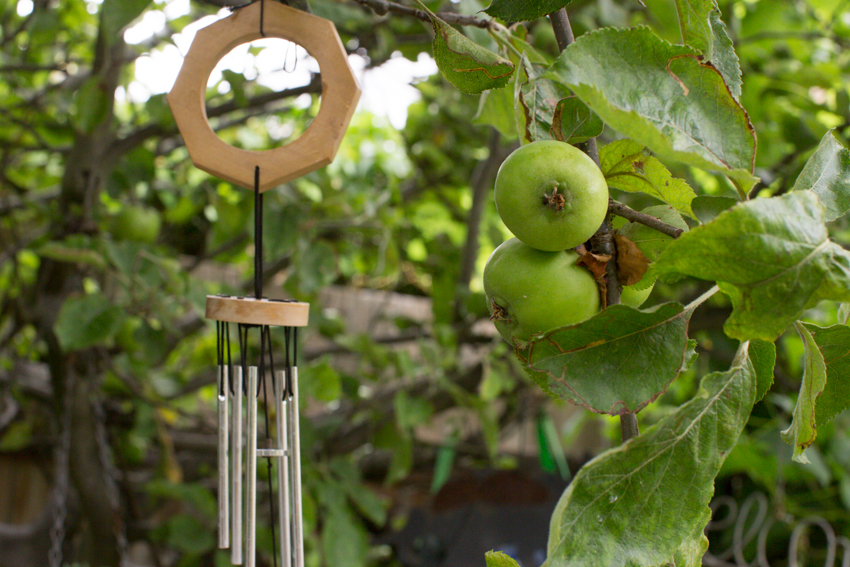 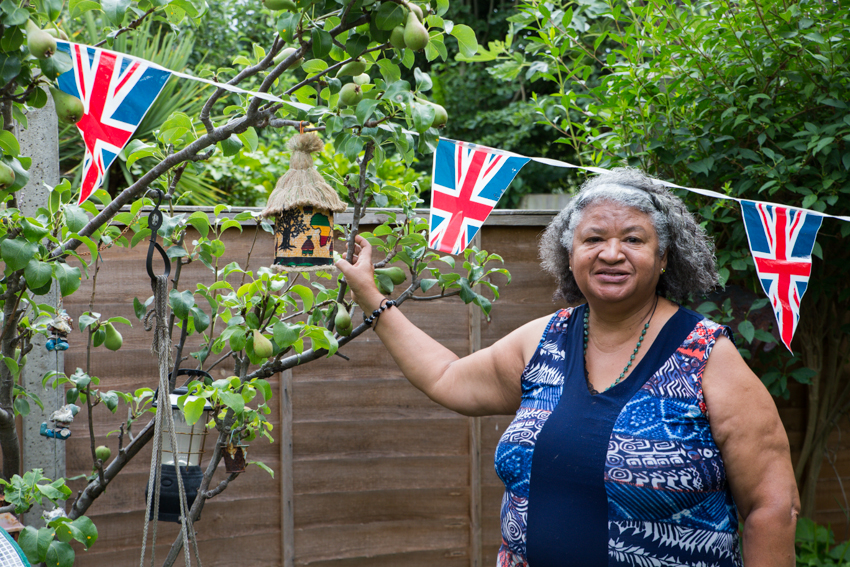 Hilda’s garden has changed over the 40 years that she has lived there. Her husband, Earl, used to be in charge of certain of the tasks in the garden. Sadly, he died two years ago in February 2018. When he was ill, he would ask Peter to cut the grass for his mum and look after the grapevine and the roses. But Hilda already knew by then, the pattern of seasonal tasks that the garden required. She, and now Peter, have taken over much of the garden for food growing. During the first lockdown, Peter was gardening three or four hours a day.

Hilda is encouraging all her family in Trinidad and in the States to grow plants and to garden. One of her brothers has decided to keep bees again. She feels that it has come full circle for her. Her father, who was a Mounted Policeman in Trinidad, was injured in his job and moved to protecting the oil fields on the island. He had about 27 acres of his own land in the south that he decided to focus on (there was family land already farmed in the north). Here he grew crops like cocoa and coffee, oranges, grapefruit and green bananas. He raised cows, pigs, turkeys and ducks.

She feels that she’s come full circle partly because Peter wants to keep bees and chickens and also that they grow food not just flowers. She told me that she used to say to her husband Earl that ‘I can’t eat flowers’ although she has learnt since that there are some flowers that you can eat. 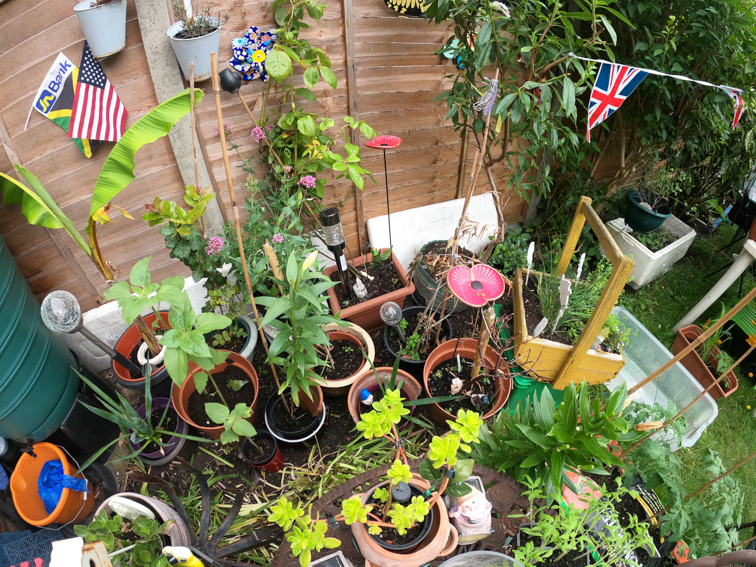 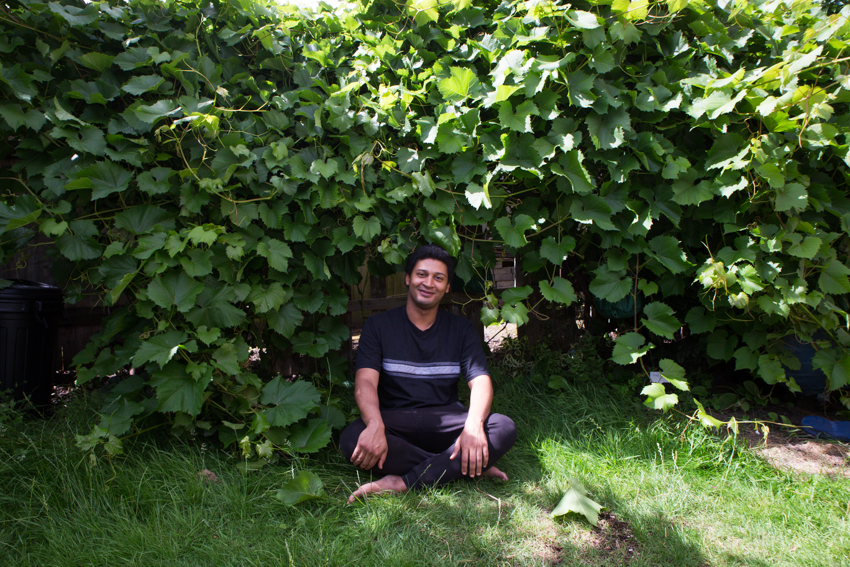 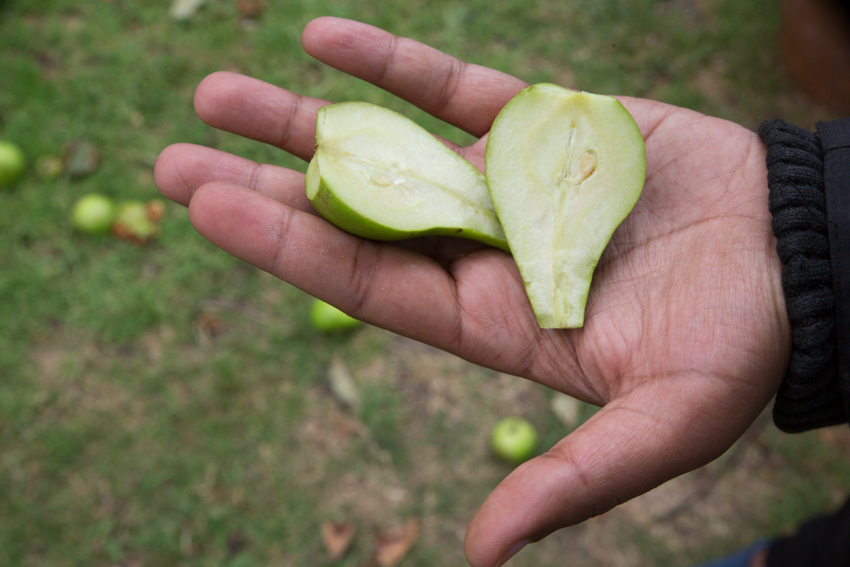 At the beginning, when she first moved in to Herne Hill, she wanted to plant fruit trees, ‘at that time it was very much about putting down some roots of things that you can eat.. because these fruit trees, have matured now and I’m giving the apples away’. The grapevine in her garden is much loved by both Peter and Hilda. It reminds them both of Earl. And Hilda loves to make wine with the grapes, using the wine making kit she bought.

As a child she was ‘daddy’s girl’ and helped him with outdoor tasks despite the fact that girls usually helped indoors and boys outdoors at that time. Even after she’d moved to Britain, she would go back to Trinidad on holiday at specific times of year so that she could help him harvest coffee and cocoa. She remembers as a child, her and her siblings taking a little bit of their grandmother’s coffee, children weren’t allowed to drink coffee instead they could drink chocolate.

They learnt how to make chocolate by parching the dried beans over a fire. The beans were then beaten into a powder with a mortar and pestle which was then rolled up to form chocolate balls. The balls could then be grated and used with milk and spices to make a hot chocolate drink. Children were also encouraged to drink bush, similar to herbal tea. This was tea made with leaves of different plants, including lime bud ‘which was good for weaning babies’, soursop and Caraili, which is ‘good for diabetes you know’.

Hilda hasn’t been slowing down this year as she approaches her 70th birthday. She took on leading an additional gardening project at Grantham GP practice in Stockwell this summer, wrote a newsletter for the Lambeth GP Food Co-op website and delivered a talk on zoom for the ‘South London Botanical Institute in October.

Hilda was interviewed by Janine Nelson, Head of Learning at the Garden Museum. Janine worked alongside Hilda at Lambeth GP Surgery in 2013 to jointly run gardening sessions there, having set up an outreach gardening project there in 2011.

Extracts from an interview recorded with Earline Hilda Castillo Binger on 4th July 2020.  This is the first of 10 portraits of gardeners based in south London with roots in the Caribbean.

Lambeth GP Food Co-op has published cook books with recipes contributed to by members of Lambeth’s diverse communities. Proceeds help build more gardens for patients in hospitals and Lambeth GP clinics. Members of the Garden Museum learning team have contributed recipes including Ceri Jones, our Food Learning Officer as have Hilda and patient gardeners from Lambeth Walk GP surgery, to the second of their cook books. It is available directly from Lambeth GP Food Co-op for £8 (including postage and packing) and can be ordered by emailing gpfoodcoop@gmail.com or phoning 07908 834203.

The scheme aims to support patients, some of whom have little or no gardening experience to grow food at home with the aims:

If you are interested in getting involved then you can contact Lambeth GP Food Co-op for an application form.