Diary of a Closed Year: Medlar

I’m standing under the west window of the church with Matt Collins, the gardener and writer. This week the hoarding comes down after eighteen months. ‘Café opens 6th June’ we’ve chalked up on the blackboard to the street.

We’re here to smile at the fruit on the medlar tree, transplanted from the old garden at the east end of the church. In its second transplanted spring it flowered in a medlar’s symmetry of five small, crumpled white petals, beside the bench where the masons and electricians sit at breaks.

The medlar was the first tree in the churchyard of St Mary’s, discovered by Mrs Nicholson, our founder, as a rubble of gravestones and sooty tombs. It was planted by Mary Searls and Stephen Crisp. Mary was a volunteer who made much of the first garden and continued until her death in 2013; even when every corner of the new Museum shines with new oak and polished concrete we still miss her particular gleam of arriving in the office and asking: ‘I just come to see if anyone needed help?’

Stephen was a trainee at the time and is today one of Britain’s most sophisticated gardeners, Head Gardener at the American Ambassador’s residence in Regent’s Park, an RHS judge, and mentor to our Trainees. And a donor: in our new displays you will see objects from a golden gnome to a 1970s lawn sprinkler in the livid shape of a mushroom which he has donated with a particular combination of generosity and mischief.

The medlar had to be moved to make way for a block of eight loos – yes, eight loos – and Stephen came to advise, together with a more recent trainee, Matt Collins. You have to hack back the branches, advised Stephen, and the roots, so it clenches into survival mode. It’s ruthless, but it has worked.

Matt was our Trainee in 2010. And I’m remembering too – as the hoarding scrapes open, and there’s a yell of a delivery of gravel – that he coincided with Charlotte Verity as artist-in-residence. Charlotte painted and drew in the garden for a year from January to December 2011. And wrote, too:

‘Arrived to find Matt … young and quick in duffle coat and boots, and a volunteer, laying out tools. Matt thought having an artist in residence was a “cool idea”’.

I’m flicking through the book of Charlotte’s residency, trying to find the beautiful line in which she detects that Elizabethan intricacy of geometry in the medlar’s forking branches. But there are so many beautiful lines that an hour passes. This is 2nd October:

‘The medlar is all about texture, the eggshell sheen on the russet fruit, the translucent petals (sepals?) and the rough flattish face, all from a fleeting crumpled white flower’.

It was Charlotte’s eye that made me see the beauty of this particular tree. In the autumn the medlar fruit fell on to the café tables. But it is a baffling fruit, guarding any inner softness like a crab. And then the fruit was gone. Where? At Matt’s leaving party it re-appeared as tiny pots of jam, one for everyone.

Matt’s project was a major garden in Richmond made to the design of Mary Keen, and the ‘cool ideas’ gathered and invented in his years a professional garden maker since are now a book (‘My Tiny Garden’ with Roo Lewis, Pavilion Books).

We now have an enfilade of eight loos; in the old days there were two, and one was invariably broken. (‘It’s quicker to cross the road to the Novotel’ I’d tell the queue). But I’m as proud of the medlar’s new life as I am of all this comfort and plumbing. And this autumn we shall have jam again.

But back home in the east I read in ‘The Gentle Author’s’ ‘Spitalfields Life’ that Tower Hamlets have given consent for a developer to move a mulberry tree planted in Bethnal Green in the reign of James I.

That’s a tree that was alive when John Tradescant gardened. Today it is in the grounds of the London Chest Hospital, sold for re-development. We’re told that it will be moved, writes The Gentle Author of this. But can you move a 400-year old mulberry? In disbelief that such a greedy thing can happen I cycle up to the developer’s hoarding, and knock and knock. Not a sound from inside. There is nothing quite so resilient, but so vulnerable to our stupidity, as a tree. 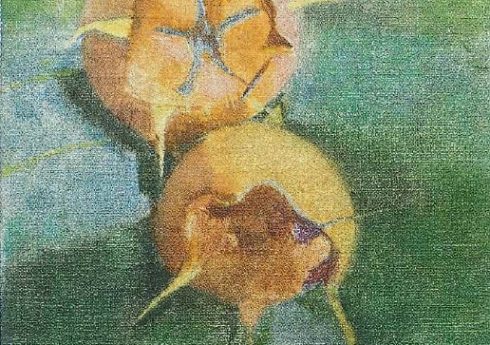