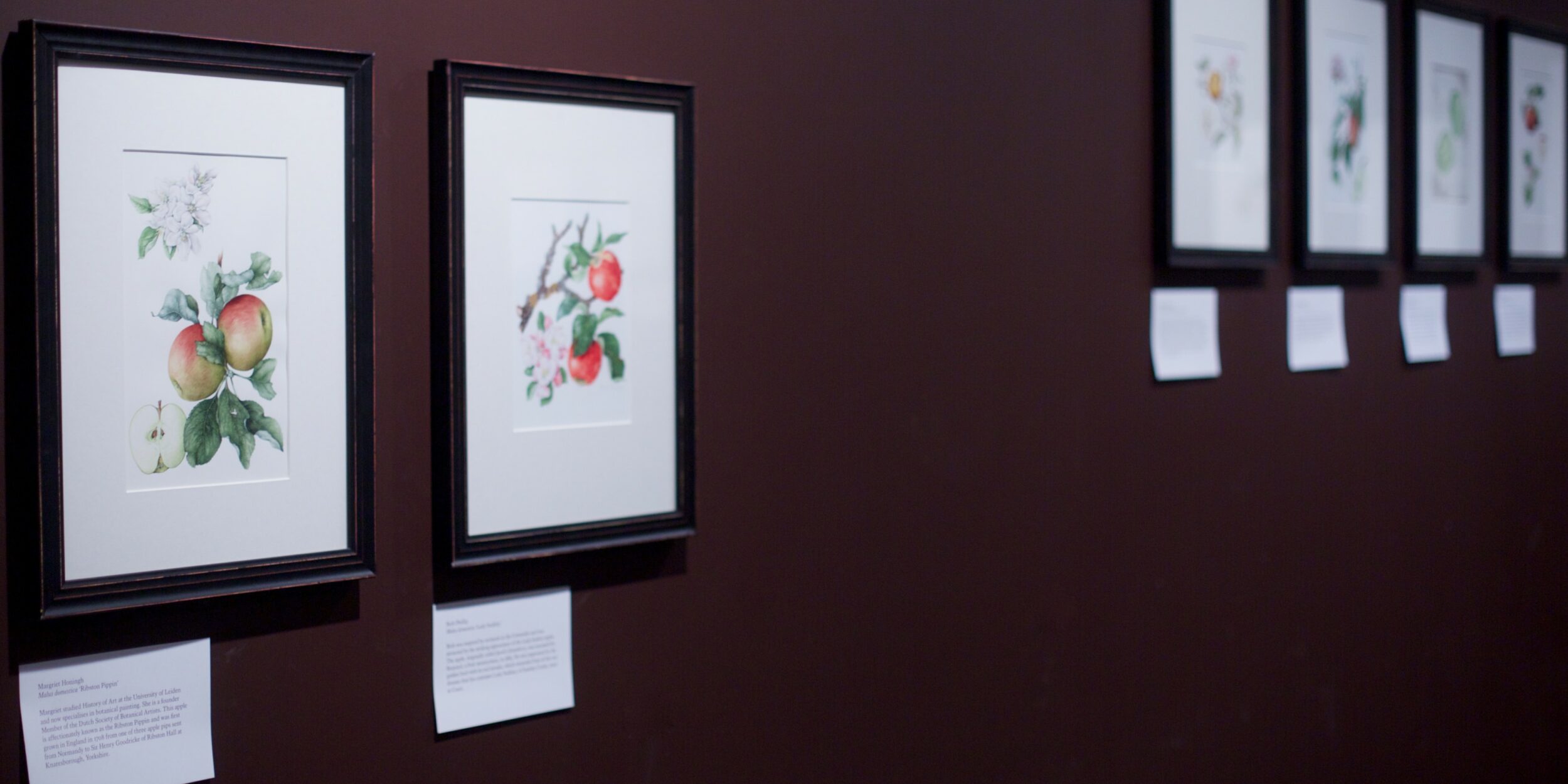 We have 1,000 labels and two dozen text panels to write by the end of January, and I am stuck on the very first. As visitors climb the stairs to the new galleries of garden history, how should we begin?

‘IN THE GARDEN’, reads the title of the first gallery (kindly sponsored by the Friends of the Museum in Leicestershire and Rutland, the popularity of whose talks and garden visits have paid for display cases, lights, and frames).

What is a garden? ‘A space set apart from the world’ I write ‘in which plants grow’. Then I change ‘grow’ to ‘are cultivated’ and add ‘which tells a story of making’. That sounds odd. Time to google for a better definition.

The Oxford English Dictionary has, ‘an enclosed piece of ground devoted to the cultivation of flowers, fruit, or vegetables’.  Another dictionary adds, ‘adjoining a house’. That is quite boring – and rules out the parks and allotments which are illustrated in this section.

What about Wikipedia? Its definition has more caveats than a weather forecast in County Cork. A garden is a space outdoors but can sometimes be indoors; it may be ornamental or useful; maintained by an ‘amateur or professional’.  If there are animals, it may be a ‘zoological garden’.  It will have plants.  Unless it is a Zen garden… A garden is enclosed. Unless it is designed by ‘Capability’ Brown (an edit from a Brownian idle now that the great landscaper’s tercentenary is over?).

But a new search for ‘what is a garden?’ brings Mail Online to the rescue.  In 2004 an entrepreneur named Michael Rockall bought a house in Woolverstone, Ipswich, and began to fell alder saplings, which had grown in the abandoned ‘garden’, intending, he said, to plant oak and beech. He was prosecuted by magistrates, and defended himself on the basis that you can fell trees in a garden without a licence. But, the magistrates concluded, it had ‘ceased to be a garden’ as it had not been cultivated for several decades. He was fined.

Mr Rockall went to the High Court, and was acquitted. In his judgement Lord Justice Moses, who said: ‘The Oxford English Dictionary states that a garden is an enclosed piece of ground devoted to the cultivation of flowers, fruit or vegetables’. He, too, was unimpressed by the OED: ‘That definition is clearly now too narrow, as the current fashion for wild gardens and meadow areas amply demonstrates’.

‘The fact that the previous owner didn’t have the need or desire for the land as a gardener and that the owner went abroad didn’t mean that the garden ceased to be one’, continued Moses. The judgement emphasized the fact of a garden being a space enclosed, and defined as such. The word is derived from an old German word, ‘gard’, which refers to an enclosure; ‘yard’, ‘court’ and ‘hortus’ are all derived from the same source.

It is true that gardens begin with boundaries, not plants: in the story of St Fiacre (the hero of our June Diary entry), the patron saint of gardening was given a day to make a garden which he did by digging a trench (He was helped by a magic staff for toppling trees, which might have come in handy for Mr Rockall).

Lord Moses states his interests in Who’s Who as choirs and hill-walking but he had evidently flicked through magazines before pronouncing ‘the current fashion for wild gardens and meadow areas’. But are we convinced by his conclusion that an uncultivated site can be a garden? A garden abandoned for over thirty years will not be in Gardens Illustrated. It will be ground unbuilt upon, with scrub. For ‘Garden’ is both a noun, and a verb: that is, a place for doing. A garden needs a gardener.

However, Lord Moses (now chair of the press complaint commission, so unlikely to have time to read Gardens Illustrated), Mr Rockall (recently, in the Mail again over a High Court case involving the tax status of his yacht) and his triumphant barrister Dominic Grieve (appointed Attorney-General two years later, gone with Brexit) have helped us towards what the Museum’s definition of a garden will be.

It must be a space set apart, and it must be a place of cultivation – whether vegetables, or flowers. It can be a window box, if it is a loved and cared for window box: US blogger Marion Owen cites Liberty Bailey, a horticulturist who lived in the early 1800’s as saying: ‘One plant in a tin may be a more helpful and inspiring garden to some than a whole acre of lawn and flowers’.

And it must be gardened. Not because a garden should be tidy but because the Museum will be a celebration of the relationship between people and gardens: what gardens give to people, and how we work out our own lives and stories through the gardens we make.

999 labels to go. But better than being a lawyer or, worse, a dictionary compiler.