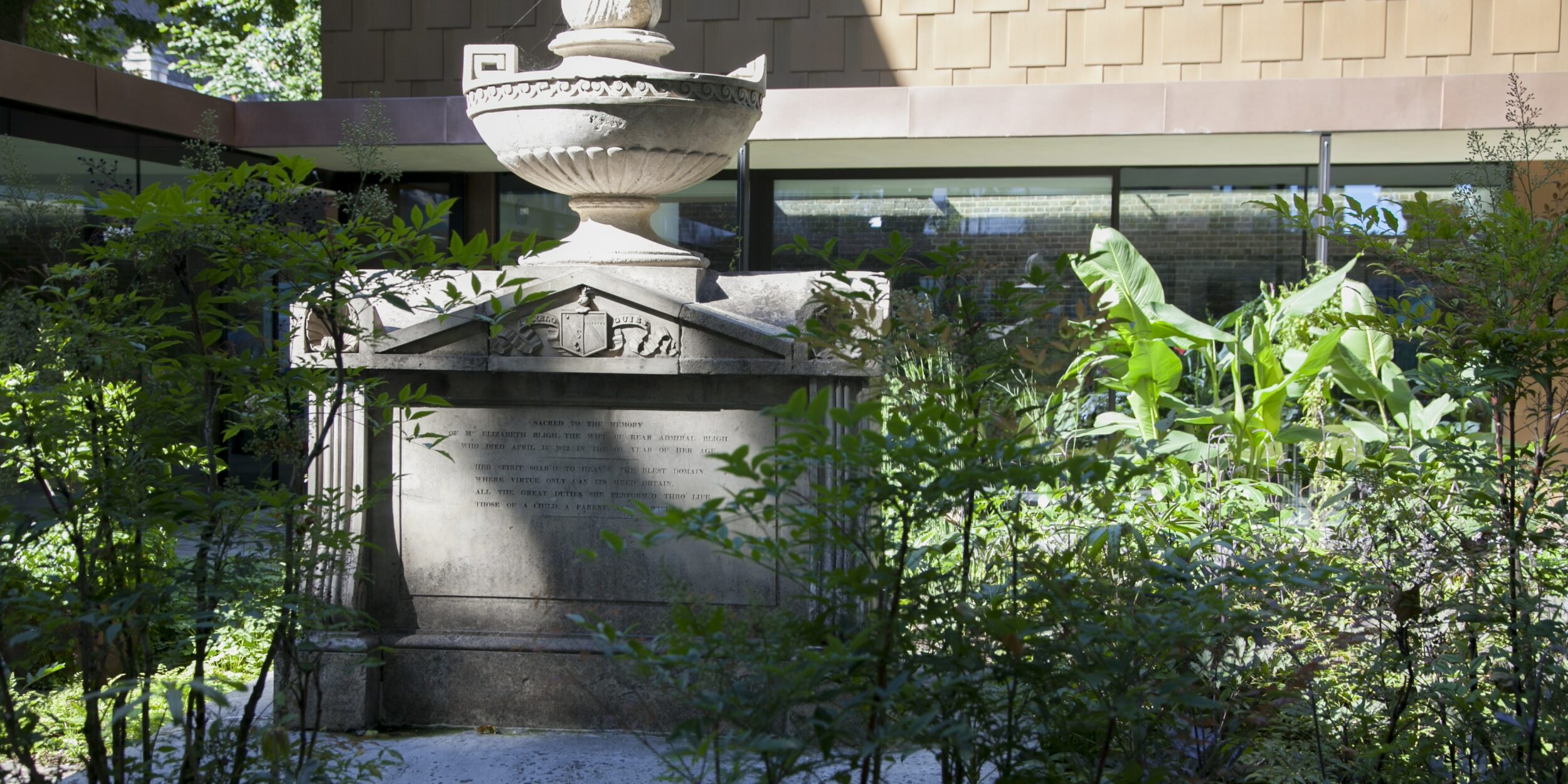 Diary of a closed year: Best thing since sliced bread?

‘Bugger!’ said a man in the Museum garden. The window of my office – in fact, the old vestry – used to open on to the tomb of three plant-hunters: Tradescant, father and son, and Captain Bligh, whose voyage on The Bounty was to collect breadfruit from newly ‘discovered’ Tahiti. ‘He never used a word stronger than “bugger”’ a well-dressed man standing by Bligh’s tomb declared to two hapless tourists who had come to admire the garden. ‘At the trial of the mutineers Bligh’ – and here the man quoted – ‘was accused of calling his officers “scoundrels, damned rascals, hounds, hell-hounds, beasts, and infamous wretches”’.

Every Monday for several weeks – just Mondays – the man mounted guard over Bligh’s tomb, and reputation. ‘Have you seen the films?’ he would ask polite, but perturbed, visitors; Bligh has been played by Charles Laughton, Trevor Howard, and Antony Hopkins. ‘I blame Hollywood! He was never a flogger!’ The man vanished, but I was reminded of how Bligh continues to divide people nearly 200 years after his death when reading over Christmas a fresh appraisal by Professor Anne Salmond of the University of Auckland (‘Bligh’, University of California Press, 2011).

Bligh’s life and also afterlife were decided by a few minutes at dawn on 28th April 1789 when – a month into a journey back from Tahiti, with over a thousand bread fruit plants in pots on board the Bounty – his second in command, Fletcher Christian, woke him with a cutlass in his hand. 18 men were ordered into a launch 23 feet in length, for what became a row of over 3,000 miles. As Salmond shows in her account of the court martial of the mutineers who were subsequently captured, it is all but impossible to know who was right or wrong, loyal or treacherous, brave or cowardly: imagine the chaos on a dark deck as men reached for weapons, or scrambled for a place in a boat – and how witnesses’ memories must have been distorted by the danger and sickness of sea voyages, and the recriminations in the three years between that Pacific sunrise and a courtroom in Portsmouth. We feel sorriest for the most silent: Thomas Ellison, a sixteen-year-old from Deptford, who could not read or write, or pay a lawyer, and was hung from the yardarm on a winter’s morning. Tattoed on his arm was the date of the Bounty’s arrival in Tahiti, which Bligh – who had sailed there with Captain Cook a decade earlier – had declared ‘the Paradise of the World’.

On his return to London Bligh was snubbed by the First Lord of the Admiralty, and by the end of his life Fletcher Christian had become a Byronic hero to young romantics. Over the years Bligh would write thousands of words to justify his command of the Bounty, and I think this explains the extended inscription on his tomb. Certainly, it is the only epitaph I know which spells out the name of a plant: ‘The celebrated navigator / who first transplanted the breadfruit tree / from Otaheite to the West Indies…’

Joseph Banks had promoted the fruit as a ‘miracle food’ ever since his voyage to Tahiti with Captain Cook in 1769. He observed how a fruit which was in season for seven months – and can be easily stored – was the daily basis of the vigorous, muscled islanders’ diet. It was Banks who persuaded the Admiralty to fund an expedition to transplant the breadfruit tree as a cheap, healthy crop after 20,000 slaves died of starvation when the War of Independence interrupted the supply of provisions from North America to the plantations in the West Indies. Bread would – literally – grow on trees.

What Professor Salmond shows is that Bligh should be recognised as a pioneering ethnographer: with exactly the same patience as he charted waters and coastlines, Bligh noted the structures and beliefs of the tribal communities of Tahiti. He participated in the islanders’ customs, repainting the figurehead of the Bounty – a woman in riding clothes – in bright colours as a response to fertility rituals and replaced the revered Captain Cook as the taio, or bond friend, of the chieftan Tu.

But the visit was extended to five months not from Bligh’s curiosity – or his sailors’ fascination with the women – but out of horticultural diligence: he waited for the breadfruit cuttings propagated by David Nelson, the Kew-trained gardener dispatched by Banks, to take firm root in a garden set up for the purpose. Over these months the sailors’ discipline unravelled. There is a second horticultural factor in the mutiny: the captain’s cabin had been converted into a greenhouse, requiring Bligh to sleep below deck. He had no space in which to calm his thoughts, and to assert a Captain’s authority.

I always thought that the men mutinied in protest at the breadfruit getting all the fresh water. That, it turns out, was on the second voyage when Bligh sailed in the Providence and Assistant from Tahiti to the West Indies with 1,281 pots on deck, and under the scorching sky of the west Pacific men licked drops from the gardener’s watering can. But this time Bligh had a cabin, and a detachment of Marines to keep order; take the plants’ water, and you’ll be flogged. This was the voyage of ‘the floating garden’ as Midshipman Tobin dubbed the Providence with plantains and coconuts growing up the rigging – or, as the slaves who unloaded the breadfruit in Jamaica, called it ‘da ship da hab de bush’.

And was it the best thing before sliced bread? It’s always said that although trees flourished in Jamaica, and Barbados, the slaves disliked the taste of breadfruit. That’s Wikipedia, and I’d like to know more. In my kitchen is my lodger’s copy of ‘The Real Taste of Jamaica’ by the popular Enid Donaldson, and the index has two recipes for roasting and stuffing breadfruit which make me lick my lips. When we re-open in 2017 the second of two new education rooms will be fitted out with cooking facilities for the use of local teenagers, thanks to the wonderful BAND Trust. What better way to celebrate the Bicentenary of Bligh’s death than with a breadfruit feast? Perhaps the smell will tickle the stubborn snout of Captain Bligh, six stout feet underneath our new garden. It will be the Bicentenary of his burial.

The conservation and lighting of the Tradescants’ tomb has been funded by an award of £6,000 by The Pilgrim Trust. We are hoping that a fan of Bligh will adopt his tomb – which will, together with the Tradescants, share centre-stage in the new cloister. It is listed Grade II* so of national importance but damaged by bombs in WW2. 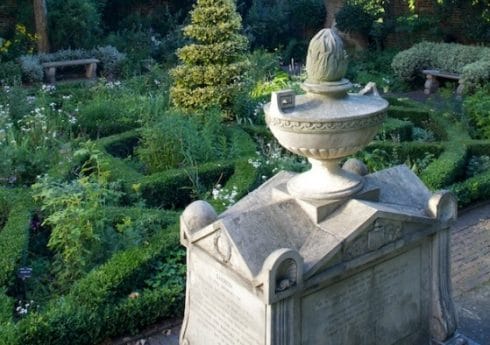 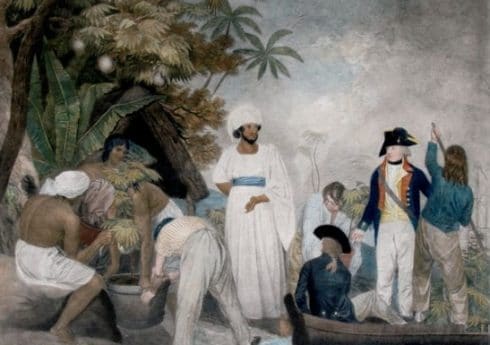