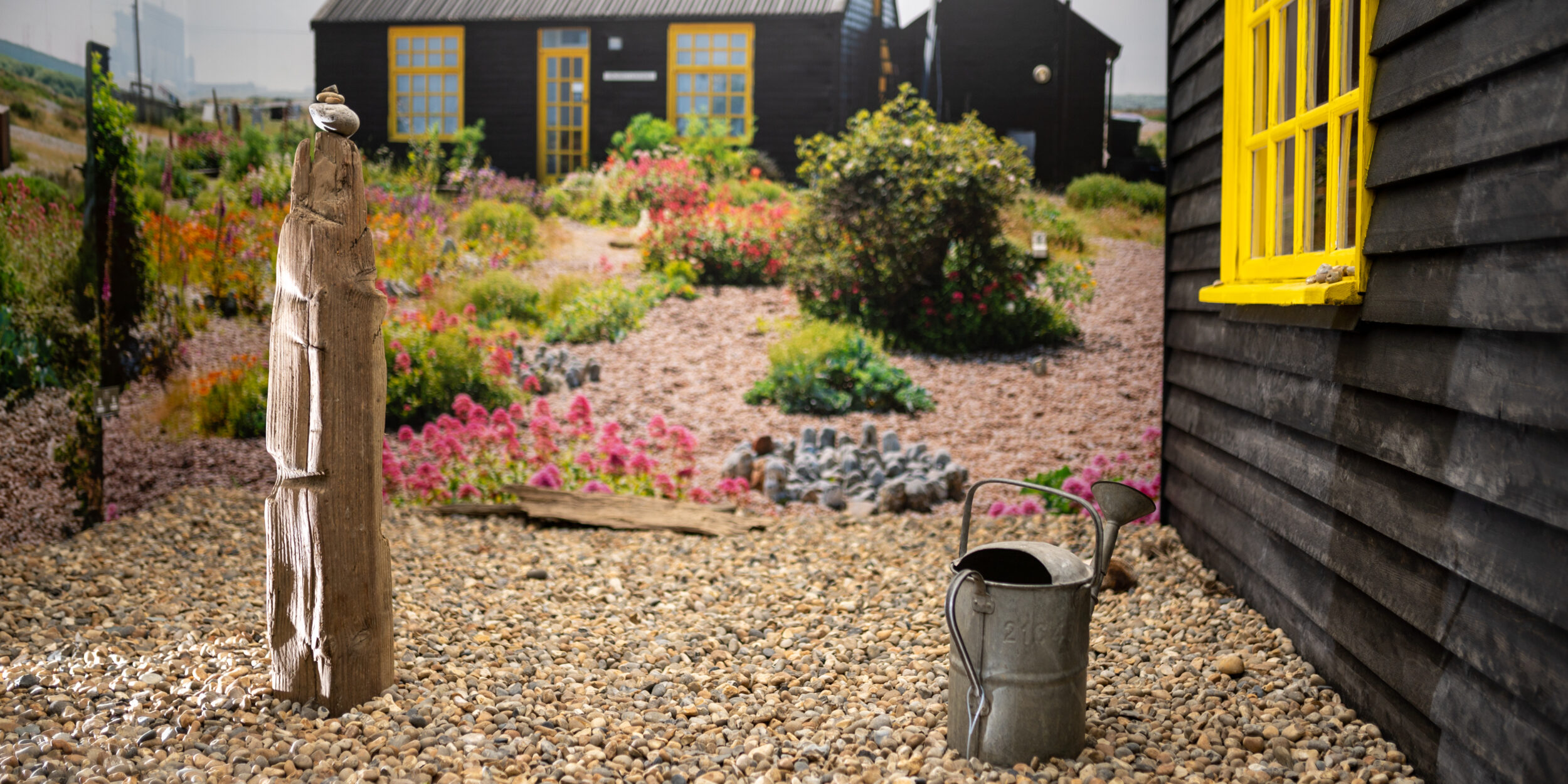 Home » News » Derek Jarman: My Garden’s Boundaries are the Horizon wins Exhibition of the Year!

Derek Jarman: My Garden’s Boundaries are the Horizon wins Exhibition of the Year!

We are thrilled to announce that last week at the Museums & Heritage Awards, our 2020 summer show Derek Jarman: My Garden’s Boundaries are the Horizon won Exhibition of the Year! The judges commented:

“At any time it would have been remarkable but in this particular venue, during a pandemic, it was all the more so. An incredibly accurate representation of the original, it was atmospheric, poignant and moving.”

Garden Museum Curator Emma House worked on the exhibition design with Jeremy Herbert, an award-winning artist and stage designer, having previously designed sets for the Royal Opera House and the Young Vic. We approached Jeremy for this project because Jarman himself was also a stage designer. 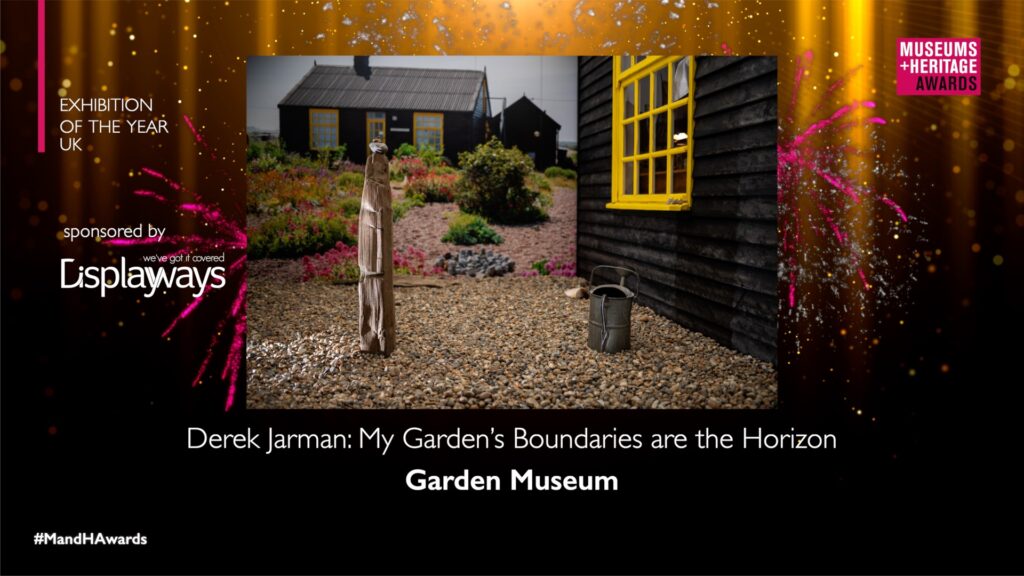 To celebrate the exhibition’s win, we asked Jeremy a few questions to find out how he did it:

Had you been to Jarman’s garden at Prospect Cottage before working on the exhibition? Were you able to go inside the house itself?

I’ve been going to Dungeness for years – since I was a teenage birdwatcher in fact – so I knew the garden from Derek’s time, but I’d never been inside before our research visits.

How did you go about recreating the cottage for a gallery setting? Was it designed around the pieces that would be exhibited?

I wasn’t so much trying to recreate the cottage as evoke its relationship with the landscape – the sense of looking out and looking in.

Derek’s study with it’s Prospero-like atmosphere seemed important to get right, so that was carefully represented. The panelled walls seemed the perfect background for his assemblages and paintings – just as they are in the cottage. I really wanted to get the small lead house that always sat on Derek’s writing desk. It seemed emblematic – like the house in the Wizard of Oz.

Emma (House, Garden Museum Curator) and I planned in advance where everything would go – the white room for the diaries; the black room for the films; although during the installation we saw other opportunities – placing the large paintings in the nave for example.

The iconic yellow window was a labour of love to recreate absolutely precisely.

What were some of the most important elements and materials you wanted to incorporate?

When I think of Dungeness I think first of the incredible light – hence the overhead lightbox and the very specific colour temperature. Then, of course, we had to have shingle. Dungeness shingle is very specific and had to come from a local quarry. The feeling of it underfoot was so evocative, and the sound combined perfectly with Simon Fisher Turner’s soundscape. I liked the rough black weatherboarding too. They used to paint it with bitumen, which would have smelled wonderful, but we had the scent of the wax on the walls instead. Part of my old greenhouse finally came in handy to recreate Derek’s bedroom in Bankside.

You’ve previously designed for theatre, how did designing an exhibition differ?

It differs mostly in the way that the design is encountered, though the two have much in common. The design has a framing role – as it does in theatre – but in this case you’re creating a space to be discovered and explored. I’ve often made work that is immersive – my design for Hamlet took over almost the entire Young Vic – but the project is always to create the right focus on the play or in this case the subject of the exhibition.

While the museum was closed during lockdown, our Nave became your workshop! Can you tell us a bit about the process of building and installing? And tricky moments?

I like to be able to respond directly to a space and for the design to evolve within it. Lockdown meant that we could make everything on site and that we had the time to work in a pleasurable and creative way. It allowed me recruit talented people (like Emma Hayward from Punchdrunk – who built with me; and Tash Shepherd – the brilliant scene painter) who might normally not have been available.
Tricky moments? We needed the long arms of Philip Norman (Garden Museum Volunteer) a few times, and finding that two tonnes of shingle need washing was a bit of a shock.

The timber we had left got made into the 30’ navigation beacon. Standing that up was a bit hairy and probably not unlike building Stonehenge – but without Druids. 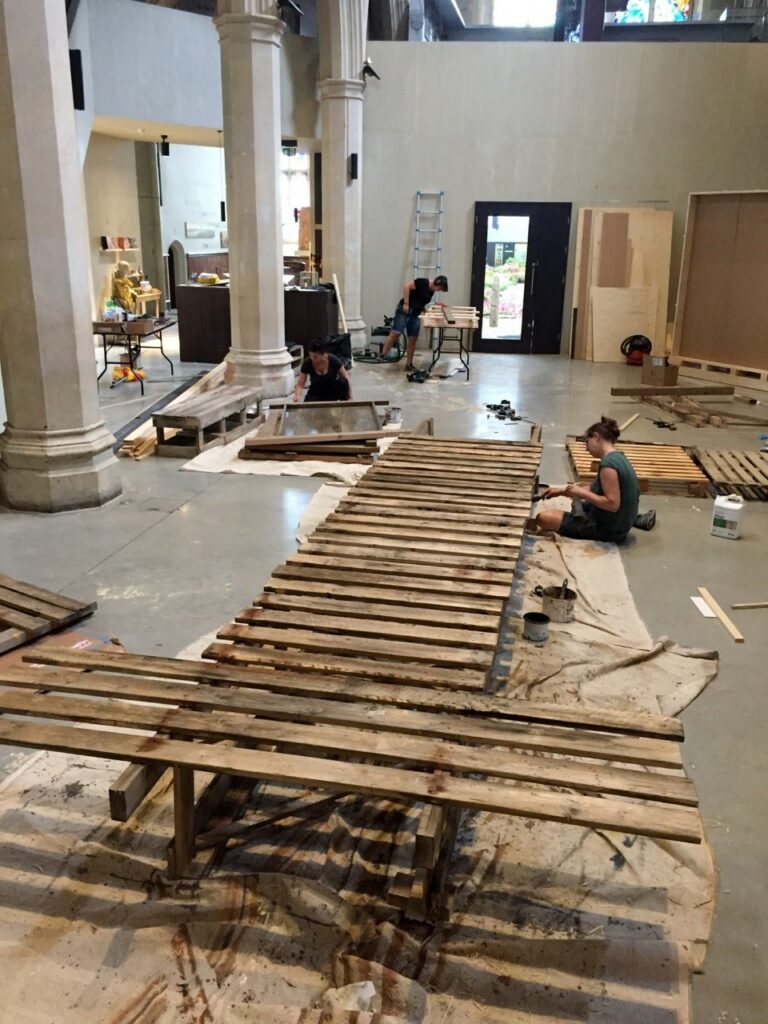 What are you working on next?

I’m doing a project in Sweden – something inbetween a play and a film. After that I’m back at the Garden Museum for that difficult second exhibition – this one’s about the landscape architect Geoffrey Jellicoe – not so well known as Jarman but just as fascinating in his own way.

Derek Jarman: My Garden’s Boundaries are the Horizon was supported by the Linbury Trust. The online exhibition can still be viewed here: Derek Jarman Online Exhibition