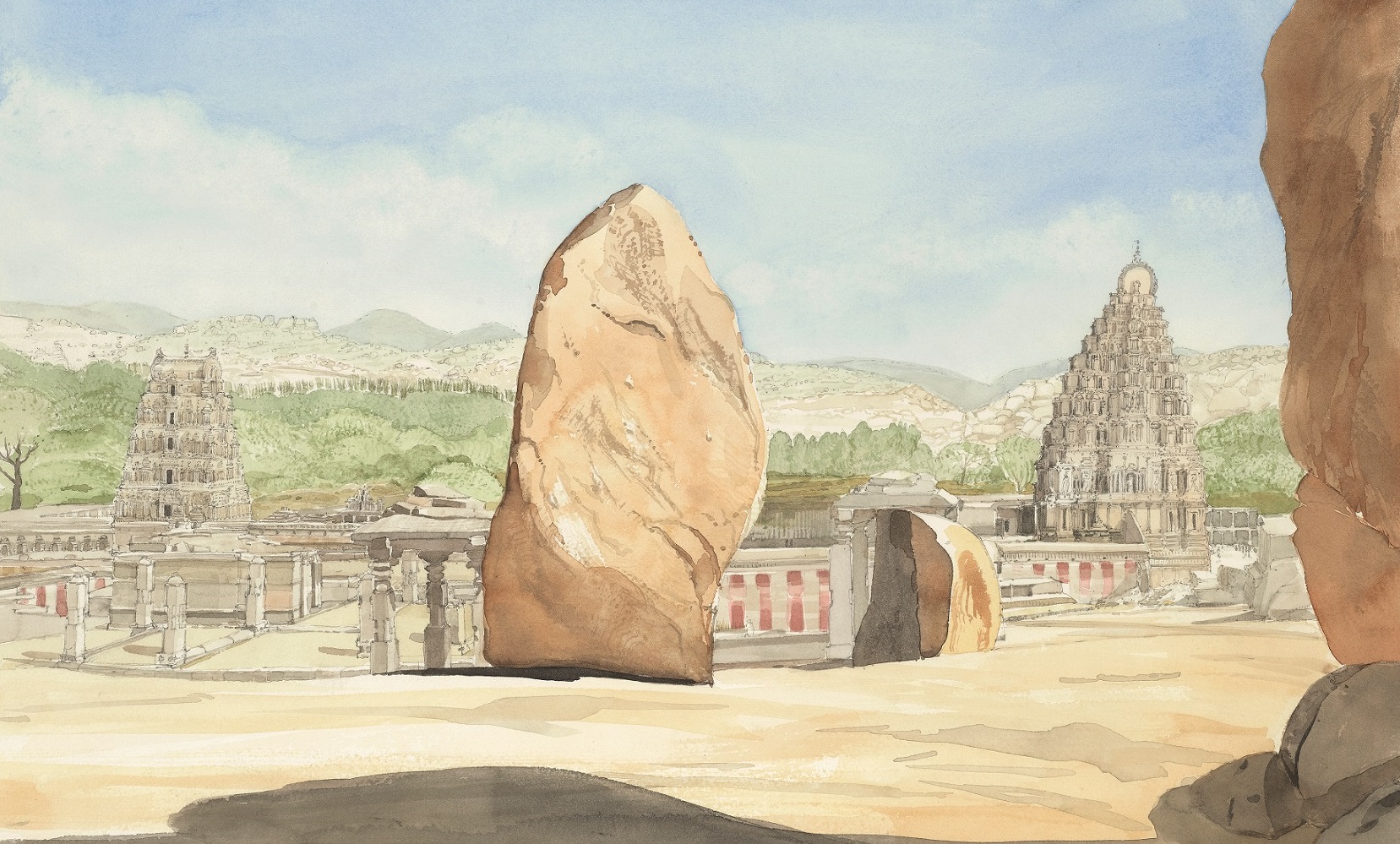 Ahead of Dana Westring’s new exhibition Tirthas: Thin Places opening at the Garden Museum on 27 April, we share the following extract from his accompanying book:

When I was a boy, there was a gentle old lady in the little town on the plains where I grew up. She had never married and had inherited a chunk of rich farmland when her father died. She had
been his cook, housekeeper, and companion, and when he was gone, in her middle age she decided she would see the world. She discovered an intrepid traveler within herself and began planning
journeys to far-off exotic places.

She went by ship, train, and bus to places few people in that Nebraska town had even dreamed of seeing: Asia, Africa, Europe, South America, Scandinavia. She packed her trunk and went. I used to spend hours sitting with her, paging through her scrapbooks that bulged with mementos, bits of paper with scribbled notes, museum receipts, and postcards. She told me stories about Masai warriors, Swiss villages, and the great cathedrals of European capitals, views of the Himalayas, and cottages in Sweden. It was there one summer day that I first saw images of the Taj Mahal. I can still see the very page where the postcard was pasted-tall narrow minarets at the corners of the domed tomb reflected in still, shimmering pools.

There is a Sanskrit word, tirtha, used to designate a sacred place. It is often described as a “thin place” where this world and the divine are close to each other. Temples are tirthas, and just as often, an ancient tree is a tirtha. There is a saying in India: ‘All temples are tirthas, but all tirthas are not temples.” In many parts of India, a village shrine might be a small altar with a few stone figures lined up on a flat stone. These images are tended and “fed” daily with ghee- melted, clarified butter and milk. They blacken and details are lost because of the ever-thickening layers of ritual feeding. They also often have daubs of bright paint decorating their features and sometimes are dressed in scraps of fabric or even elaborate silk robes.

I found the tirthas compelling on many levels. My curiosity about faith and divinity nudges me forward and heightens the aesthetic appeal of the places. My pilgrimage became about drawing and painting sacred sites. I observe and experience them on whatever level I am allowed. The distances are often vast. It can take a day or two to get to a remote or important temple site, so meeting India head-on comes with the journey.

These drawings and watercolors record my pilgrimage. I wandered through the eighth-century caves of the state of Maharashtra and spent days at the early sixth-century temples across Karnataka. I walked the streets of lost capitals of great kingdoms.

I traveled alone with my drawing board and watercolors. I tried to tread lightly. Looking for inspiration, I visited remote sites and hiked through rocky landscapes to reach hilltop shrines. Sometimes it was a rocky cliff with a tiny sanctuary cut into it that drew me in. In many places, the great stone temples with dark passageways and damp chambers called me.

I did this to create these images while walking in the footsteps of countless pilgrims. As they sought enlightenment, I walked in the hope of understanding something about the contradictions of the place. I guess I was hoping to experience the spiritual comfort found at the “thin places,” trying to look into the eyes of the face that had slipped into the dark doorway.

Dana Westring | Tirthas: Thin Places is open from 27 April – 5 May

The works in this exhibition are for sale in aid of Lambeth Green, our project to make a public park around the Museum. At its centre will be an ornamental pavilion which will serve as a horticultural training centre for young people from Lambeth, and our project to develop a green public realm.