The Garden by Vita Sackville-West 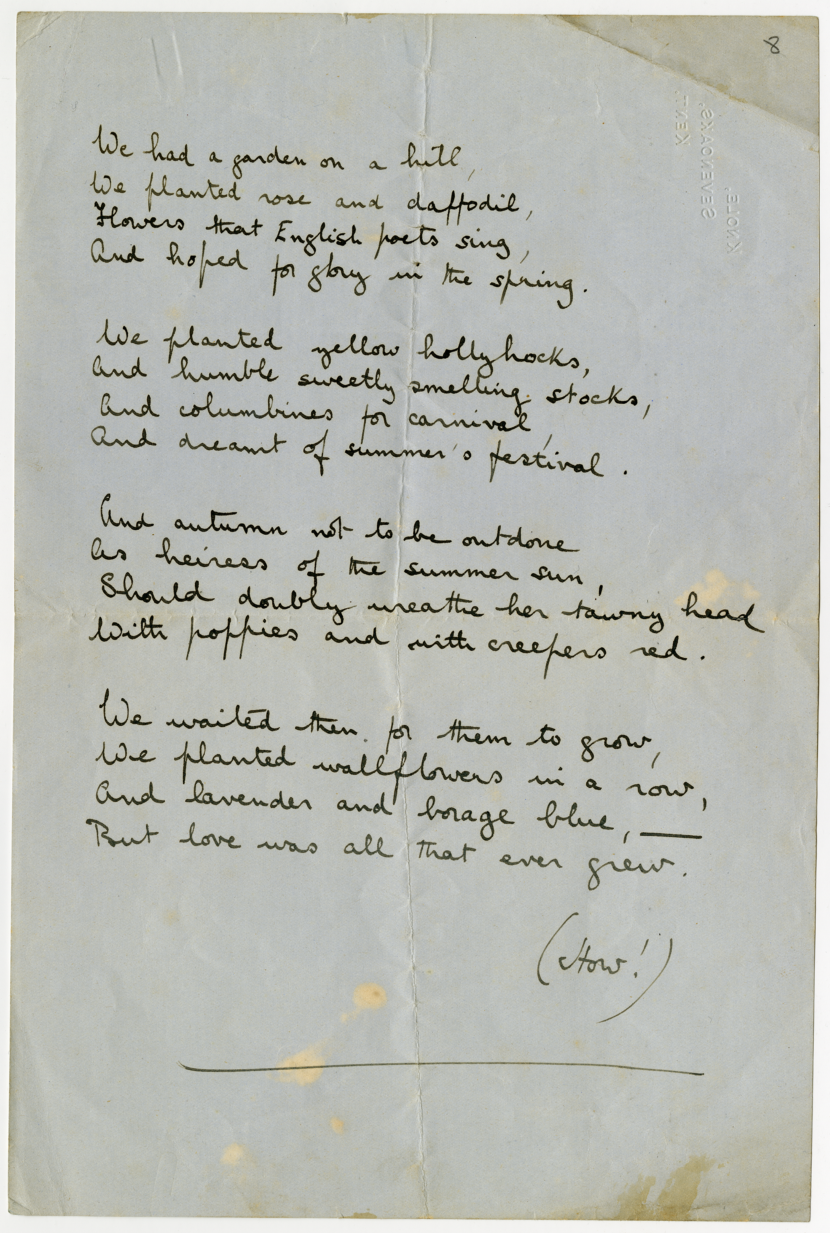 In 1915, as spring turned to summer, within weeks of buying her first house in the country, Vita Sackville-West (1892–1962) wrote in her diary, ‘I thank God I have known absolute happiness’. The house in question was Long Barn, two miles from Vita’s family home of Knole, near Sevenoaks in Kent; her happiness consisted of her husband Harold Nicolson, their first child Benedict and, for the first time in Vita’s life, her garden. So moved was she by her first essays in gardening at Long Barn that she wrote this poem, called simply ‘The Garden’. An amended version was published two years later in ‘Poems of West and East’ (1917).

The poem is typical of Vita’s early verse, with its regular metre and rhyme scheme and suggestion of escapism. Charm and sincerity balance any lack of profundity or formal experimentalism. For Vita, writing in the first ecstatic months at Long Barn, when the sun apparently shone unbroken and she looked forward to the birth of her second child in September (with no foreshadowing of the stillbirth that lay ahead of her) love was indeed what really grew. Later in the year, her mother would introduce her to Gertrude Jekyll. For the moment, Vita gardened instinctively, gardening as much an expression of her happiness as the frequent loving letters she wrote to Harold whenever they were separated – or this poem.

For 15 years ‘untidy and tinkly’ Long Barn, a medieval house with Tudor additions rumoured to have been the birthplace of William Caxton, was the site of Vita Sackville-West and Harold Nicolson’s gardening apprenticeship. There they established that vision of English manor house gardening they would afterwards perfect at Sissinghurst Castle, beginning with a clump of primroses, dug up in a nearby wood and transplanted to one of Long Barn’s sloping banks. Vita’s first plantings were overtly traditional. After her visit to Jekyll, whom she described as ‘rather fat, and rather grumbly’, she planned a rigorously yellow and white scheme for part of the garden and planted a host of climbing roses: American Pillar, La Guirlande, W A Richardson, Albéric Barbier, Gloire de Dijon and Madame Alfred Carrière.

But it was not from Jekyll that Vita drew the certainty of this first garden as a setting for ‘carnival’ or ‘festival’. Briefly, in the first year of their marriage, Vita and Harold had lived in a house on a hillside in Constantinople. The luxuriance of its long-abandoned garden, bathed in rose-pink Turkish sunlight, dazzled Vita even in its desuetude. There grew pomegranate, quince and fig trees, vines, roses and naturalised carpets of bulbs. Chinese Rosa banksiae twined through lilac bushes, cyclamen formed bright tussocks beneath the fruit trees. For Vita, this natural exuberance perfectly matched her own soaring spirits. This sense of a garden as a repository of joy, first glimpsed abroad, perfected in the early years at Long Barn and celebrated in The Garden, would remain with her lifelong.

(Matthew Dennison, author of Behind the Mask: The Life of Vita Sackville-West)

Gift of Nigel Nicholson, who stated this poem refers to the first garden she created which was in Constantinople [Istanbul]…’We had a garden on a hill’.  Ref: 2000.048.1