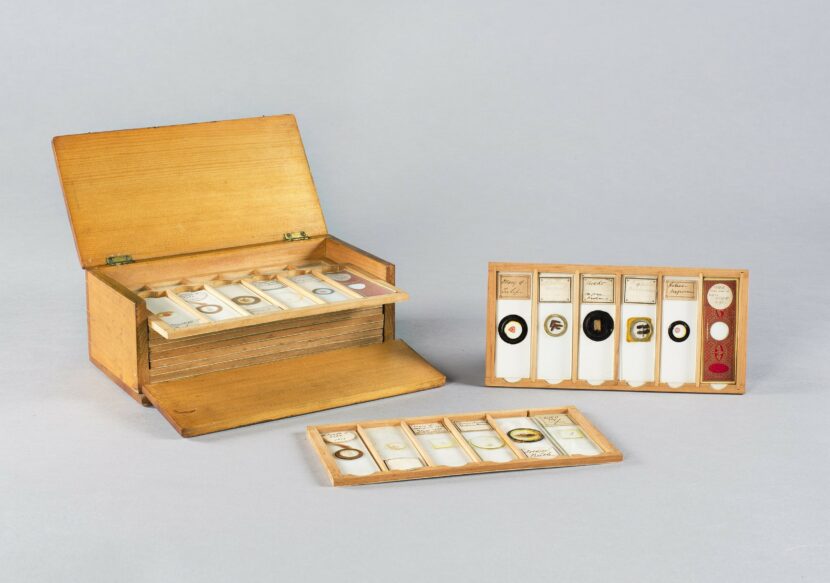 This beautiful wooden box belonged to the Nurseryman and plant hunter Peter Veitch (1850–1929) and contains his preciously mounted specimens of flora and fauna. In its carefully labelled slides we see represented his meticulous botanical training and his natural curiosity, both essential characteristics of the Victorian plant hunter.

Born in 1850, Peter Veitch was part of Veitch Nurseries, a celebrated family dynasty of the Victorian horticultural industry. Plant hunting was a key part of the Veitch practice; trading from the start of the 19th century to the 1960s, they dispatched collectors to every corner of the globe and introduced over 1200 new plants to British gardens. The species they sent home, from giant Californian redwoods to the Chilean fire bush, fuelled the consumer craze for the exotic.

The Veitches prized the botanical knowledge of their plant hunters to convert the sea-weary seeds into enticing blooms, and Peter Veitch was no exception. This slide collection is believed to have been assembled around 1872 during his own botanical training, as he visited seed-houses across Europe and was apprenticed at family nurseries. Tenacity and determination were highly prized attributes of plant hunters, as they faced both extreme danger and disappointment. Peter Veitch himself travelled to Australia and Fiji in 1875, discovering numerous new ferns and seeds. This promising first collection was blown away by a gale on the returning sea voyage, but undeterred, he continued onto the South Sea Islands to reassemble what he could.

Peter Veitch’s slide box demonstrates the lengths nurseries went to in order to capture the attention of fashionable Victorian society, and eloquently describes the human determination and enterprise which drove this transformative period of garden making.