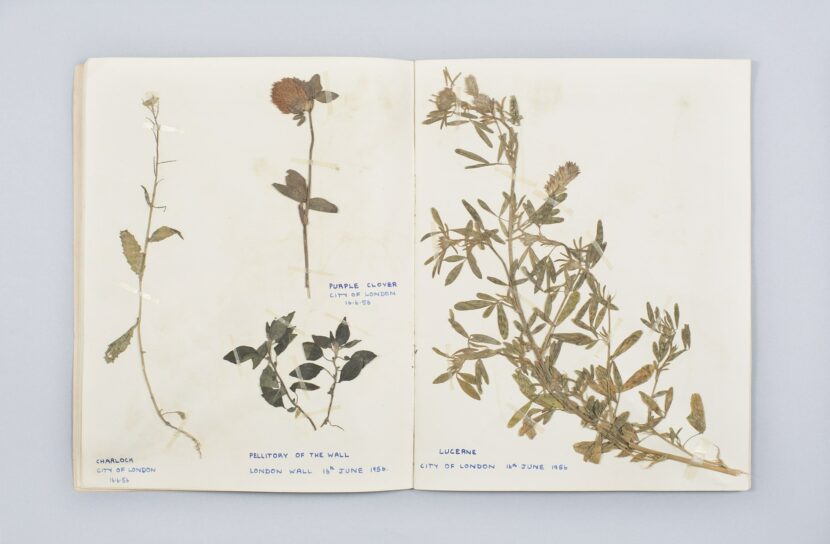 This scrapbook was used by Jane Lindsay while still a schoolgirl in London to record and preserve wildflowers picked from bombsites in the City of London. Flowering plants include purple toadflax, pellitory of the wall, and lucerne. As a child Jane Lindsay was encouraged to look at flowers by her mother, who had studied botany. By the time she started school she knew the names of most of the wild flowers growing close to her house. In her teens she joined a naturalist group organised through the Young Elizabethan magazine and led by Richard Fitter, a leading figure in the urban botany which flourished in post-war Britain. These flowers were collected from the bombsites on which the Barbican would later be built, and which she remembers as ‘a wild, open space, full of birds and wild flowers… and remnants of the old Roman walls’.

One phenomenon of the Blitz was the efflorescence of spontenaous flora in the bombed rubble. The botanist Edward Lousley estimated that before the war no more than 20 flower species grew in the City of London. By 1944, over 100 could be found. These sudden meadows became symbolic of rebirth and hope, so that just before VE Day The Times featured as a lead news story a lecture by the botanist E J Salisbury, describing how ‘wildflowers had spread over the bombsites: rosebay willowherb, coltsfoot, groundsel, Oxford ragwort, Canadian fleabane and thornapple, Thanet cress’.