Portrait of a Black Gardener 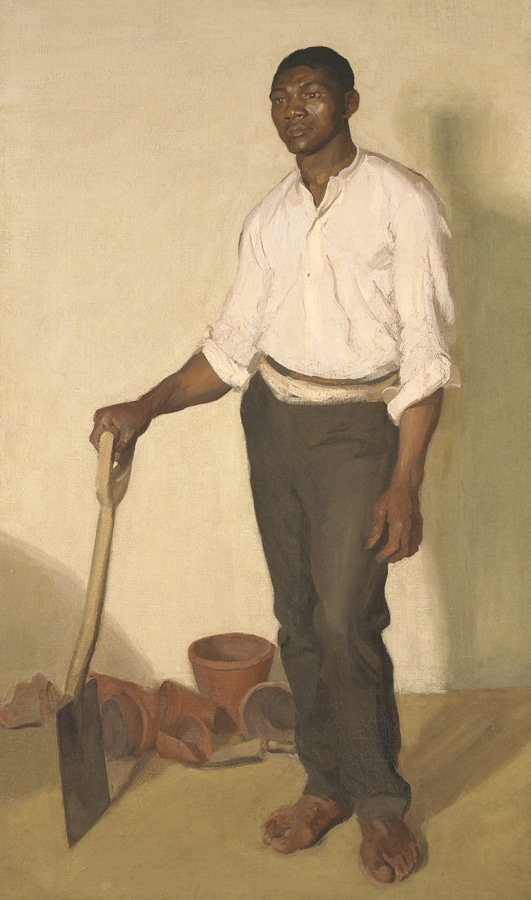 This painting, a rare portrait of a gardener, was painted in around 1905 by Harold Gilman (1876–1919). Gilman trained at the Slade School of Art and had recently been studying the work of Velazquez in Spain, clearly an influence on this early painting.

The man in the painting is something of an enigma. His bare feet and elegant form suggest that he might be an artist’s model, posing in a studio. This full length portrait is particularly important as one of the first painted of a man of African descent in celebration of his unadorned form. Previously, black people in British art were most often found in ‘exotic dress’, appearing in historical or genre scenes.

This painting was acquired because of its celebration of gardening as an heroic act. Harold Gilman was a Socialist who distrusted conventional society which may explain his willingness to break new ground through his art. Its acquisition prompted the Museum to look afresh at the role of black people in British gardens, and in particular the presence of black gardeners in late 19th century Britain. One example was the gardener and expert botanist Thomas Birch Freeman who sent specimens to Kew whilst working as a missionary.

This painting is a significant addition to the Garden Museum’s growing collection of artwork by one of Britain’s leading artists. Acquired in partnership with the Royal Horticultural Society and purchased with the assistance of the Heritage Lottery Fund, the Monument Trust, and the Art Fund.