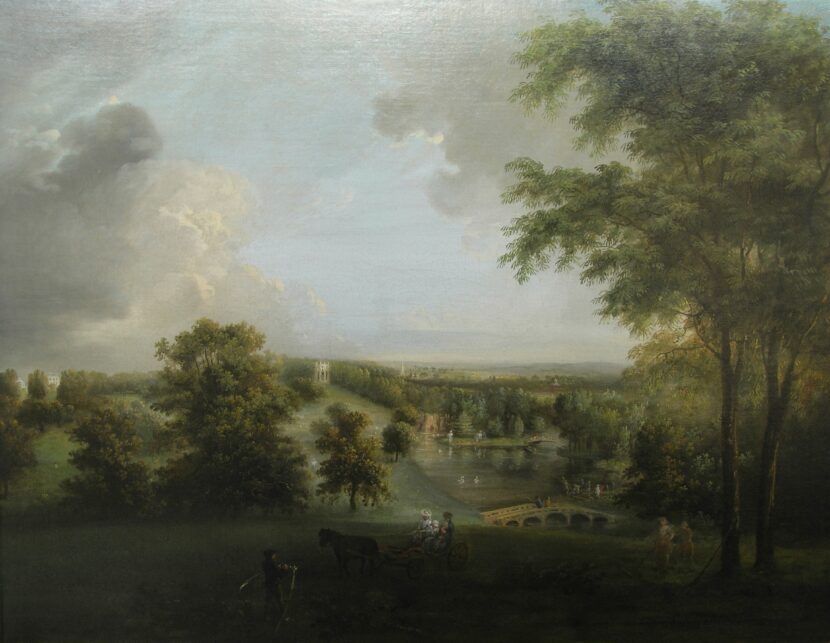 When it appeared for sale at auction in 2014, this painting was described as showing the landscape at Virginia Water. It was only at a closer look that it was spotted as, in fact, Painshill. Research into the picture had to be clandestine – including an undercover visit to the auction house with a conservator – so that on the day of the auction the Museum was the only bidder who knew its true identity.

This was the first 18th century oil painting of a landscape garden in the collection and was acquired in order to illustrate the changing style of design. The garden was designed by its owner, Charles Hamilton (1704–1786), who purchased the Surrey estate in 1738. Hamilton spent considerable sums of money on his garden, which he created in the Picturesque style. The landscape in this painting shows many of the features typical of the movement including follies such as the Grotto and Gothic Temple, expanses of water, and dense naturalistic groupings of trees.

From 1758–1762, Charles Hamilton erected six of the principal garden buildings at Painshill: a gothic temple, a mausoleum, a Temple of Bacchus, a hermitage, a castle and a Turkish tent. This view, painted from the Turkish Tent, looks across to the gothic temple and grotto. He was forced to sell his estate in 1773. The Museum has been able to date this picture to the 1780s or 1790s by the presence of the house on the left hand side, built by Bond Hopkins. The artist continues to be a mystery.

Purchased with the assistance of the ACE/V&A Purchase Grant Fund, the Art Fund and the Beecroft Bequest.