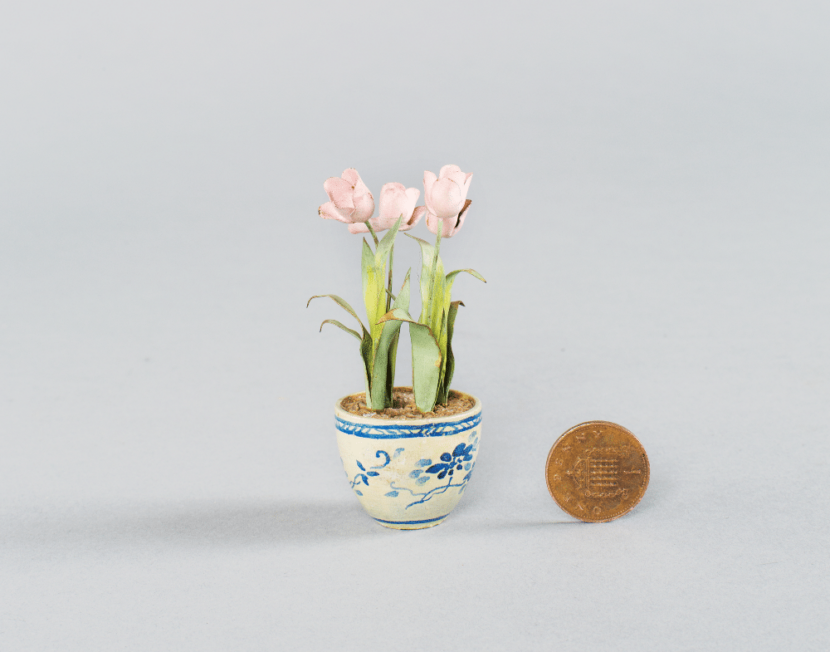 This miniature pot of tulips was designed by the miniaturist Beatrice Hindley, it is said for Queen Mary’s Dolls’ House. The neo-classical style house was designed by Sir Edwin Lutyens and was filled with thousands of objects to the scale of 1:12 made by leading artists, designers and craftsmen of the time. The garden was designed by Gertrude Jekyll, and was housed in one of four compartments in the base of the Dolls’ House (the other compartments contained the garage complete with six cars, the wine cellar stocked with a selection of wines sourced by Berry Bros & Rudd, and the working machinery for the Dolls’ House). The garden was completed with a green velvet lawn, box hedging, and trees finished with real twigs of dwarf growth picked from Dartmoor.

Jekyll enlisted the help of her friend Beatrice Hindley to make all the growing and living things in the garden. Hindley spent time at Kew, studying the forms and colours of flowers, before trialling different metals and paints to give a realistic finish. Jekyll describes the results of Hindley’s work as ‘a triumph of patience and ingenuity’.

This pot of tulips was given to the Garden Museum by the niece of Peggy Griffiths, who had been one of the miniature-making team in Hindley’s studio.