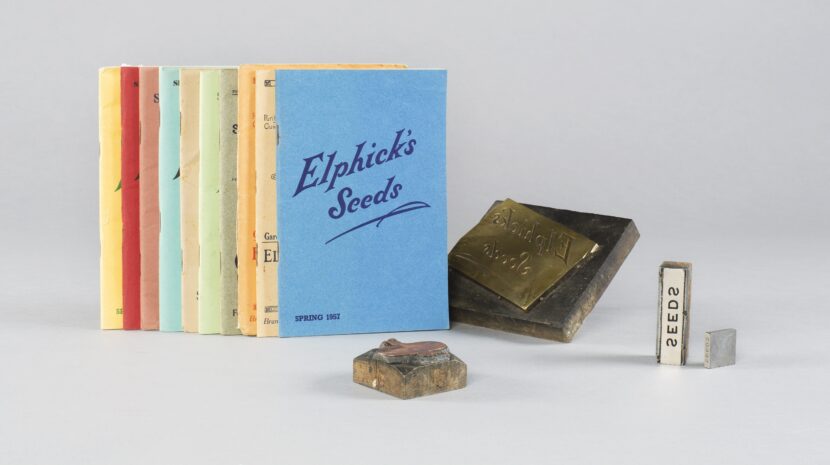 Elphick’s nursery was founded in Lewes, Sussex, by George Elphick in 1823 and handed down from father to son until closing in 2002. Tony, the last Elphick to run the business, donated an archive of the family business to the Museum in 2003 and continues to visit us today. This collection shows how a small family nursery used art and graphic design to create a strong visual brand and, also, that ingenuity in advertising was essential in the competition for local gardeners’ attention, and purses.

While their motto was ‘everything for the garden’ they were known particularly for their garden seeds. Elphick’s annual show in Lewes ran every year from 1932; prizes were awarded for flowers and vegetables grown from the company’s seeds. A set of over 100 printing blocks record a history of eye-catching graphics, and of changing products. Catalogues were brightly coloured and ornately decorated with prints, illustrations and, later, photographs.

The photograph of broad beans in their pod tells a further story. It was taken by Charles Jones, a professional gardener turned photographer, in the early 20th century for use in an Elphick’s catalogue. His work – which gives vegetables the sculptural quality of still life subjects – was celebrated in an article by Anna Pavord which asks ‘can a vegetable be heroic?’ She writes of his role in seducing nursery customers: ‘his photographs acknowledge and celebrate a gardener’s achievement: pride in a scab free potato, the dignity of leeks with roots as sinuous as a sea anemone’s arms, a plump head of celery tied with a carefully-trimmed knot.’