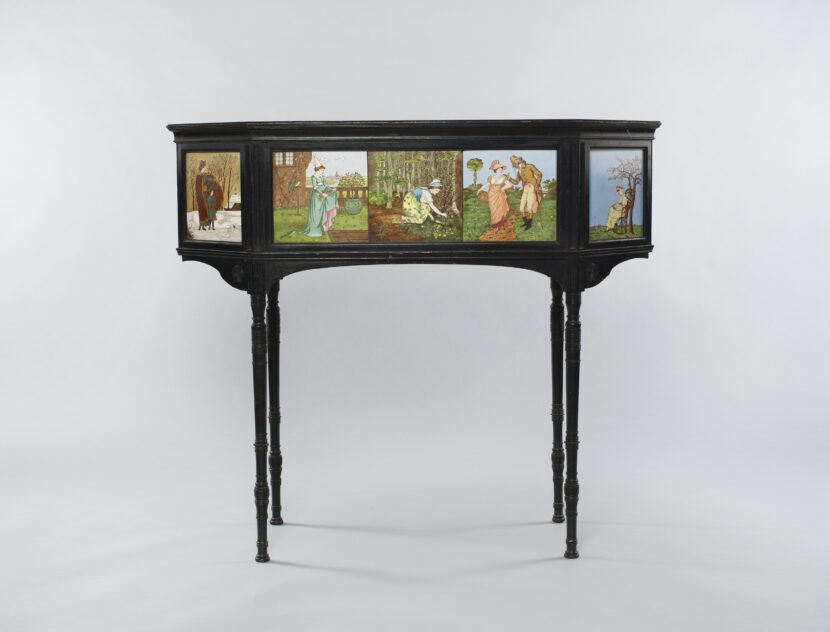 This plant display stand, or jardinière, belonged to the renowned horticulturalist Ellen Willmott (1858–1934). It is made in the Aesthetic style, with ebonised wood inlaid with Minton tiles. The tiles were designed by Walter Crane (1845–1915) and Kate Greenaway (1846–1901) and depict a variety of figures in garden habitats, often in fairy-tale settings. The tile featured opposite is drawn from Crane’s illustration to the nursery rhyme ‘Where are you going my pretty maid’.

Minton tiles could be purchased with the design in outline. These have been coloured-in by the same hand and with several tiles annotated ‘Willmott plus one bearing an ‘E.W.’ monogram, they are assumed to have been painted by Miss Willmott. The jardinière was used at Willmott’s family home of Warley Place, which she inherited after her father’s death.

Willmott was a great horticulturalist, and funded many plant hunting expeditions all over the world. In 1897 she received the Victoria Medal of Honour, the same year as Gertrude Jekyll. However, she was also a famously demanding employer, and gardeners would be dismissed for allowing even a single rogue weed to grow. Towards the latter part of her life, Wilmott became obsessed by the security of her plants, and is rumoured to have booby-trapped her daffodil fields against bulb thieves.

After her death, Willmott left this jardinière to her butler, John Robinson, one of the few staff loyal enough to stay. Robinson’s granddaughter later auctioned it at Sotheby’s, where the Garden Museum purchased it in 2003.