Home » Collection » April, Sunday in the Park by Yoshio Markino

April, Sunday in the Park by Yoshio Markino 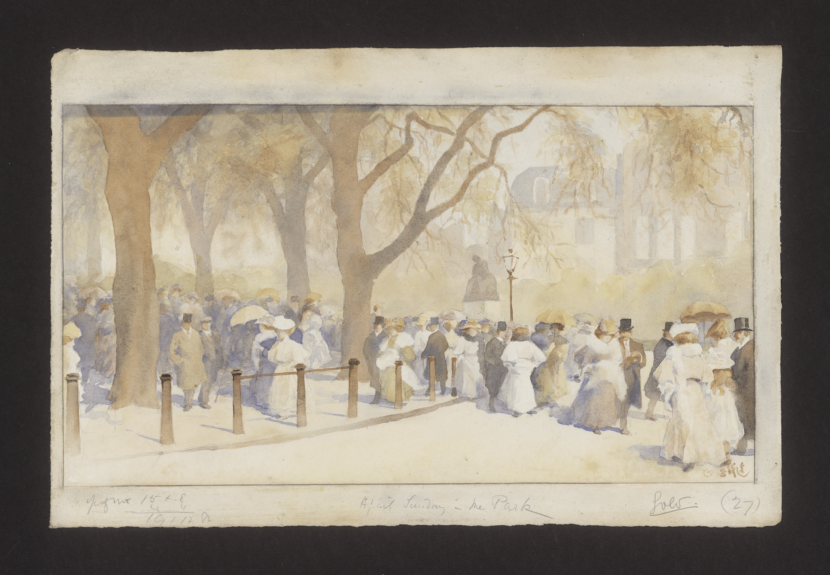 Japanese artist Yoshio Markino (1869–1956) recorded his observations of life in London through his work; this watercolour shows Hyde Park in around 1905. Markino’s illustrations appeared in The Colour of London published in 1907. This was followed in 1910 by an account of his travels in A Japanese Artist in London, along with similar books of his watercolours, The Colour of Paris (1908) and The Colour of Rome (1912).

In his account of his travels, Markino writes of his first visits to London’s parks as a Japanese tourist in an increasingly multicultural London:

I started my first sightseeing from Hyde Park and the Green Park and St James’s Park. I could not understand all those iron railings. I thought they were to divide private grounds from the public ones. But I saw many people on both sides. I so timidly walked inside the rail. Nobody shouted at me. Then I went near the crowds of people with still more fear… I took off my hat on purpose to show my black hair. Finally one man pushed me accidently, and he touched his hand to his hat and apologised to me very politely. I realised at last I was in a country where I could enjoy my liberty quite freely. Fancy polite apology instead of swearing and spitting!

Yoshio Markino lived in London from 1897 until the middle of the 20th century. He died in Japan in 1956.
Purchased through the HLF Collecting Cultures programme.  Ref: 2013.004