In the Garden Museum Journal No.38, our archivist Rosie Vizor tells the story of Elphick & Son Ltd., ‘Seedsmen of Lewes’. Once frequented by Duncan Grant and Leonard Woolf, Elphick’s was a famous garden supplies business, proudly run by five generations of the Elphick family over 180 years. Tony Elphick, the final owner of the firm and also a Life Friend of the Garden Museum, generously donated this archive to the Museum for posterity after the shop closed down in 2003. 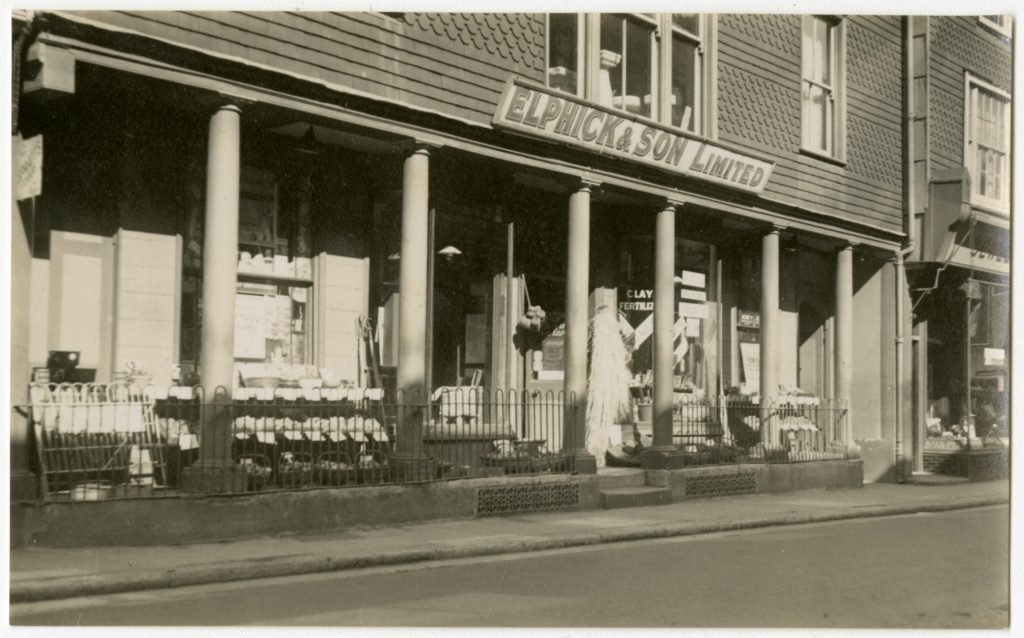 One of the prizes within the Elphick’s archive is a collection of photos by a lost genius of Edwardian horticultural photography, Charles Harry Jones. Born in Wolverhampton in 1866, Jones was a gifted professional gardener who worked at several private estates, before turning his hand to photography.

From about 1893 he is recorded as being Head Gardener at Ote Hall near Burgess Hill in Sussex, which had been tenanted to Herbert Wood Esq by the owner, General Temple Godman. Jones married Harriett Meadows (b.1869) on 22nd April 1894 at Dunsby, near Bourne in Lincolnshire, where her father John is listed as a ‘Cottager’ holding 9-acres of land. The 1901 census has Charles and Harriett, along with children Nelly and Arthur, living in Ote Hall Cottages with his occupation noted as ‘Domestic Gardener’. At Ote his talents were recorded in ‘The Gardener’s Chronicle’, 30th September 1905:

“The present gardener, Charles Jones, has had a large share in the modelling of the gardens as they now appear, for on all sides can be seen evidence of his work in the making of flowerbeds and borders and in the planting of fruit trees. Mr Jones is quite an enthusiastic fruit grower and his delight in his well-trained trees was readily apparent…. The lack of extensive glasshouses is no deterrent to Mr Jones in producing supplies of choice fruit and flowers…. The appearance of crops denoted the all-round capability of the man in charge; and that it does not stop at gardening is testified by the many excellent views from photographs taken by his camera which appear from time to time in the gardening press.”

From 1900 Jones experimented with photography and produced gold-toned gelatin silver prints of gardens, vegetables, fruits and flowers. He photographed some of his subjects isolated from nature, against neutral or dark backdrops. These works show a clear and natural command for composition and tone.

A skilled printer, the style adopted by Charles Jones features a delicate play on arrangement, light and focus, illustrating an unprecedented level of skill for the time and foreshadows the work of later photographers. The photographs in the Elphick’s archive are known to be originals by his initials ‘C.J.’ annotated in pencil on the reverse.

His photography enjoyed success – the earliest use in print appears to be a series of pears for The Gardeners’ Chronicle in 1902, some of which also appeared later in Amateur Gardening magazine. The images for Elphick’s seed catalogues date also from this period and some were subsequently used in their catalogues for the next 50 years. The seed company had a bold and innovative marketing strategy, at the centre of which were their catalogues with their brightly coloured covers and distinctive typography. Jones’ photographs greatly enhanced these beautifully designed booklets. Included within the archive are the original etched copper printer’s blocks used to reproduce Jones’ photographs in their catalogues.

In the autumn of 1905 Jones gave up gardening to become a professional photographer and moved to Norwood Villa, North Road in Bourne, Lincolnshire, close to his wife’s family at Dunsby. Here he set up his studio, the 1911 census has his occupation listed as ‘Photographer’ working ‘At Home’. He developed an extensive body of work for the gardening press and horticultural ‘image libraries’. The local firm of Charles Sharpe & Co, in Sleaford, purchased many of his photographs, selling them on to various companies including; John K. King, Yardes’s Seeds and Brown & Sons Ltd in Bristol. Another client was the publisher and printer, Blake & MacKenzie of Liverpool, who printed Jones’s photographs in the seed catalogues of numerous companies, including Kers Ltd and also Brown & Sons. From the 1905 to the 1930s his photographs regularly appear in gardening magazines notably, The Gardener’s Chronicle, Home Gardening and Amateur Gardening.

The 1939 pre-World War II Register for England & Wales, has him still living in North Street at No.13 (possibly Norwood Villa) and his occupation noted as ‘Horticultural Photograph[er]’, he would have been aged 73 at the time. Contemporary photographs show No.13 as a three-storey dwelling, on the street and with a shop frontage to one side. Charles Jones appears to have remained in Bourne until his death in 1959. In 1981 a trunk of his photographs was purchased at a market in Bermondsey and he was rediscovered by the photographic world. Jones’ photographs now sell at auction for upwards of £5,000, and have been exhibited in several institutions including the V&A in London, the Museum of Fine Art in San Francisco, and the Musée de Elysée in Lausanne. The Plant Kingdoms of Charles Jones, a book of his photographs by Sean Sexton and Robert Flynn Johnson was also first published in 1998.

How lucky that in the gift of the Elphick’s archive, some of Jones’ photographs lay in wait!

To purchase a copy of The Elphick’s Archive journal featuring photographs by Charles Jones : Click Here