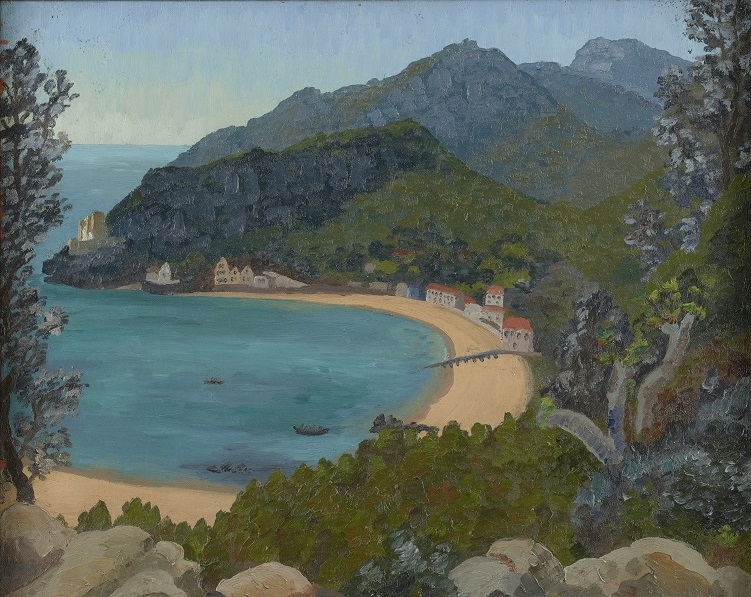 ‘Foreign travel, O reader, has its very real advantages, and all the pleasant scenes you have collected are so many medicine bottles stored on your shelves, against all the maladies of life’.

Wrote Reginald Farrer, as quoted in Nicola Shulman’s cracking A Rage for Rock Gardening (2002). Farrer was remembering plant-hunting in Tibet when, he said, ‘happiness filled me like a cup’.

This winter we can only travel by Instagram or on Zoom, although my iPhone stubbornly insists on telling me the temperature in Olhao, on the Algarve, where I was exactly a year ago. (Fifteen degrees if you ask). A boat putters out to the sand banks, and the little towns of Armona, Culatra, Farol. Farol is posh, for second-homes; Culatra is where the fishermen live, and each house has a little garden won out of the sand and wind with that wilful joy  of ‘wrong plant, wrong place’. And on a flimsy plastic chair you eat fried fish in the sun. Yes, as Farrer says, a memory can be a glug of happiness.

Portugal was a favourite place for Cedric Morris, and the sink at Benton End was tiled with souvenirs of one visit (Not that Morris would have spent much time at the sink. He had as much interest in washing up as his most talented student, Lucian Freud. Fair enough). Morris and his lifelong partner Arthur Lett-Haines opened the East Anglian School of Painting and Design (EASPD) in 1937; from 1940 it was at Benton End, at Hadleigh, Suffolk. Benton End is a rambling Tudor manor house and its only heating was a single electric bar in the kitchen; the bedroom above was the warmest in the house and Lett bagged that.

Philip Mould’s 2018 exhibition and catalogue ‘Beyond the Garden Wall’ illustrates his winter travels: to Mexico in 1939, to Morocco in 1948, to Tresco in the Scillies in 1950, and to stay with friends in Libya, and Lebanon, and Turkey, and as far afield as St Helena or Rhodesia. Letters to Lett complain at the expense of shipping paintings home; for five years, from 1952 to 1957, he travelled with a lover Nigel Scott, a plantsman whom Beth Chatto had introduced him to, and who died suddenly of fever in the Canary Islands.

This week I’m reading Janet Waymark’s new biography of Cedric Morris, which she tells as nine vivid episodes: an aristocratic childhood in Wales, Twenties Montparnasse, wartime at Benton End. The book has that charm of letting the material unfold for itself, and I have been enjoying Esther Grainger’s account of one of Cedric’s last journeys: to Spain and Portugal in 1977.

Grainger (1912 to 1990) was a Welsh artist whom Cedric met teaching art to the unemployed at Merthyr Tydfil, where the unemployment rate reached 98% in the late 1930s. Cedric’s family had made its fortune in 19th-century ironworks; now, he wrote, ‘this place tears me to bits’ and in addition to painting scenes of dereliction for Londoners to witness in galleries he put up unemployed miners and their children at Benton End. (He would later name a pale-pink iris he bred ‘Edward of Windsor’ because, Waymark tells us, when Edward VIII visited a mining town the king left the set route to talk to the inhabitants of Brynmawr).

In February 1977 Grainger, who was 65, took Morris, who was 87, to Southampton Docks and on to the car ferry in Bilbao. Her diary, preserved in a private collection, describes ‘a nightmare finding accommodation’ in the grey old city of Ovideo, then west along the wet north coast to Ribadeo where they discovered some ‘hoop-petticoat narcissus’. Then to the Portuguese city of Braganca: ‘one of the great drives of the world’. Then, to Santarem and ‘marvellous flowers – anemones, scillas, rock-roses’, to be drawn, or pressed. By 23rd February they had reached the Algarve, and Lagos, where they picnicked under the trees.

I don’t know why I find this journey so enchanting: two pensioners, friends from left-wing causes of half a century before, stopping an old car on dusty roads to pick flowers in woods and comment on scenery. Little happened. One night Cedric was rude about the dinner at a parador, and she left him at the table; he apologised. Another day he was knocked over by a car which did not stop, but no bones were broken and he recuperated sleeping in the sun (he was a master at sleeping in the sun), and after a ‘MAJOR HEAVENLY DRIVE into hills so beautiful as to stop the heart’ they took lodgings on the Algarve, and she cooked mackerel and potatoes. (‘The Portuguese are delightful people with charming manners’ Cedric wrote. ‘They do not laugh if one tries to speak their impossible language, and never overcharge. They even appear to like us a race, which I find incomprehensible’).

On 15th March they turned for home, stuck in Bilbao and a ‘noisy awful café’ with hills which reminded them of the Welsh valleys in which they first met. When the ferry came Cedric climbed to the top bunk, although he was warned not to. It was the last of his winter journeys. He died in 1982, four winters later, after a tumble down the stairs at Benton End.

In notes on travels in Spain and Portugal discovered after his death and published by John Blanchard in the Journal of the Alpine Garden Society in September 1985’ he wrote of the ‘Moon Country’ above Almeria, where he collected a small purple purple crocus. Up there ‘would be a nice place to die, always dry and no noise’.

Each journey added to the plant collection at Benton End. Cedric had seen the narcissi at Ribadeo on an earlier trip with Basil Leng, a plantsman who lived on the French Riviera. The two had stopped for a picnic and Leng noticed a narcissus already in seed when others were still in flower, as Blanchard tells in Wild Daffodils (1990). He gave Morris a handful of bulbs. But when, years later, Leng returned to the spot where they had picnicked the wild narcissi had been swept away for road widening.

But Morris gave one of these early-flowering narcissi to his friend and protégé Beth Chatto, who named it Narcissus minor ‘Cedric Morris’. So, a species lost in the wild (‘which flowers really early and is so cheery to bring into the house in small pots in time for Christmas’ writes designer Arne Maynard) survived because of these happy adventures of journeys, picnics, and friendships. And on the excellent Beth Chatto’s Plants & Gardens website you can order bulbs: ten pounds each, and a maximum of three per customer: ‘If you order more we will only supply three!’ it continues. Quite right. Sadly, the tiled kitchen sink was removed by a later owner of Benton End.

The Garden Museum is working with the Pinchbeck Charitable Trust to revive Benton End as a place of art, horticulture, and learning. Follow Benton End on Instagram: @benton.end

Cedric Morris A Life in Art and Plants by Janet Waymark is published by Whitefox Press.