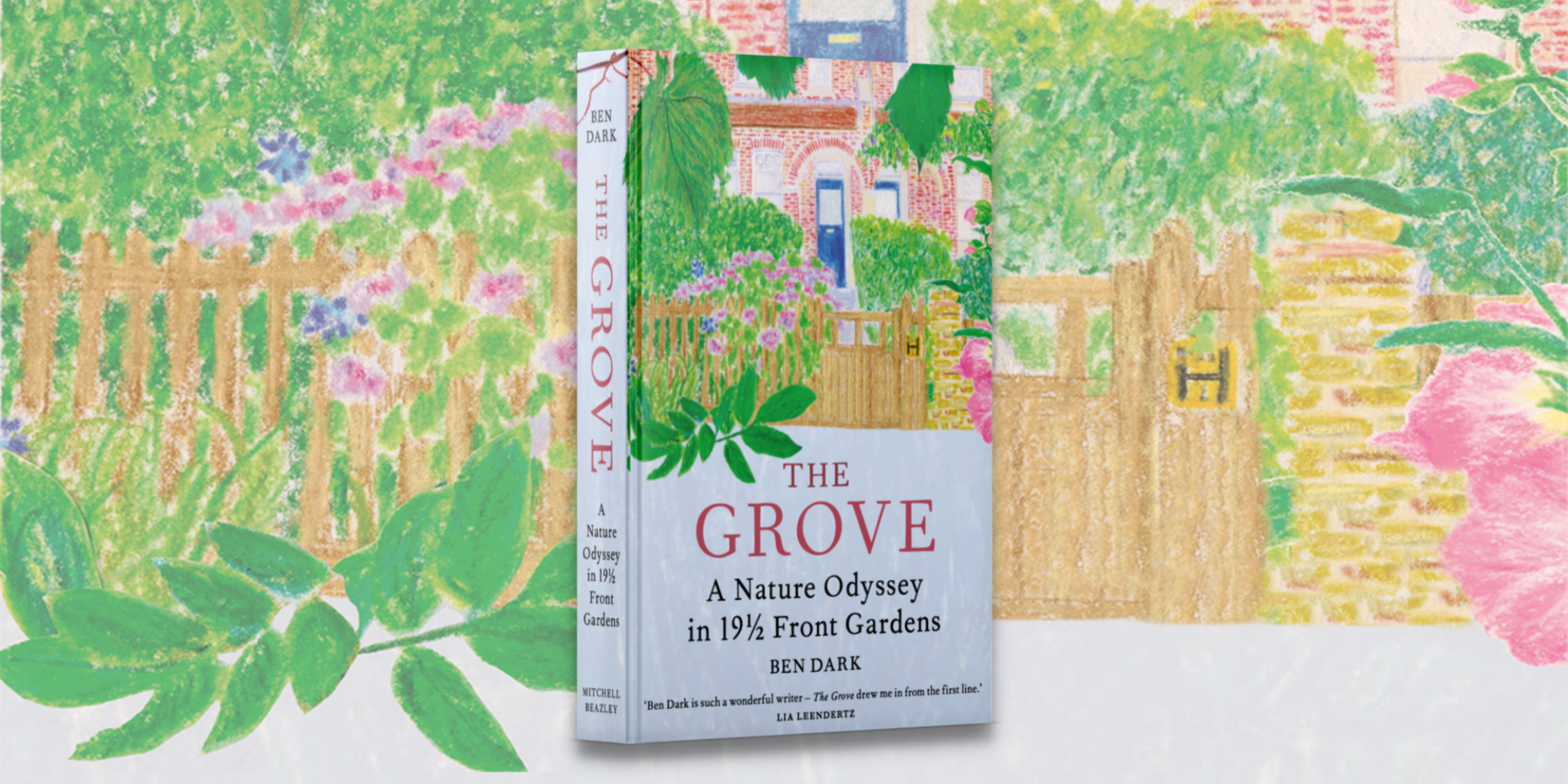 Ahead of his talk at the Museum on Friday 8 April, Ben Dark shares this extract from his new book ‘The Grove’, which reveals the remarkable secrets of twenty commonly found species – including the rose, wisteria, buddleja, box and the tulip – encountered in the front gardens of one London street over the course of year.

One autumn afternoon, the hedge outside No.67 Norroy Road changed my life. I say without glibness that nothing has affected me more. My baby son, for example, is perfect, but his arrival was not surprising. Those Euonymus came from nowhere.

They were the cultivar known as ‘Emerald ’n’ Gold’. If you have stood on a suburban street, you have seen it: banana- yellow leaves splashed with holly-green, an effect dismissed as ‘colourful’. But that didn’t matter. I recognized the shrubs and I could name them. The pavement had new meaning. It was no longer ‘the bit outside 67’, it was the pavement by the variegated Euonymus fortunei.

My second day at horticultural college had finished an hour earlier with twelve plant sprigs set in milk bottles and the instruction: ‘memorize them’. Genus (Euonymus), followed by species ( fortunei), followed by cultivar (‘Emerald ’n’ Gold’). And now one of those plants was in front of me, carrying with its garish leaves the obvious but somehow overlooked realization that every plant on Norroy Road had a name and was learnable.

I awoke to plants with a convert’s zeal. Each week the dozen milk bottles and their twigs waited and I further deciphered the margins of Putney. I could speak a new language. My commute became circuitous. It took an extra forty minutes to reach our shared house, with detours to Fanthorpe Street, Erpingham Road and Clarendon Drive. My girlfriend waited while I scratched mahonia to show her wood the colour of turmeric, or crushed choisya to release the scent of vodka and basil. These were not rare plants, they grew on any street with gardens. Some I had certainly passed every day of my life, and yet I had let them remain undifferentiated. It was as if I had unquestioningly inhabited a city where people had no face, just a smooth balloon of flesh; and then one day I’d changed my spectacles and seen smiles everywhere.

I had not been unaware of nature. I knew an ash tree and a horse chestnut and I had a recipe for sloe gin. But I was plant-blind. Anything that was not emblematic or edible melted into a leafy backdrop. Sometimes bits of hedgerow would produce greengage plums, but I never learned about them from their foliage or their naked stems. It was easier to wait for the fruit and be surprised each time.

I grew up in Hampshire, at the foot of Shoulder of Mutton Hill, where a stone dedicated to Edward Thomas looks out on: ‘Sixty miles of South Downs at one glance.’ As a teenager I walked his woods, but in his poems I read the plants as rhythm and colour alone; a nice-sounding signifier for something fleeting or ancient. Hawthorn berry and hazel tuft, elm, celandine and charlock, words with as much meaning as his vanished manors of Codham, Cockridden and Childerditch.

Today I am a head gardener living in a flat in Southeast London with my wife and baby son. On the way here I have worked for museums, oligarchs and public parks. I have built rockeries from stones that arrive on their own lorries and pulled bindweed from the birthplace of the English Landscape Garden, but the joys of the city street and the memory of that first September on Norroy Road have not left me. Since discovering that gardeners tread a richer path than other folk, I have searched for more meaning in the plants I pass. I returned to the poems of my adolescence and reread them with unclouded eyes. I went back to university to study the history of gardens and took a further pay cut to spend my Thursdays looking through documents at the British Library and the Natural History Museum. I still feel fondly towards Euonymus fortunei ‘Emerald ’n’ Gold’ but now the plant has layers of meaning beyond that first shock of recognition.

An outer layer tells of Robert Fortune, the botanist who defied the Qing Emperor and brought tea to the Himalayas. The species is named fortunei for him, but he introduced it as Euonymus radicans, receiving four pounds and four shillings for his variegated specimen in October 1863 at a sale in Stevens’ Auction Rooms, an auction house dedicated to the sale of ‘articles of zoological or scientific interest’.

Fortune’s tea heist altered the economic future of China, Britain and India. The variegated Euonymus has altered only domestic hedges, so it is fitting that its discovery was entirely suburban. Fortune found it on a walk around Tokyo, having set off with ‘a flask of wine slung over my shoulder, and a small loaf and jar of potted meat in my pocket’. Its discovery is a legacy of when the British Legation to Japan was home to more plant hunters than diplomats. But in it is also contained the story of England, a nation that regarded itself as the apogee of horticulture, being confronted by a gardening culture older and more complex than its own. As Fortune wrote, ‘It is only a very few years since our taste in Europe led us to take an interest in and to admire those curious freaks of nature called variegated plants…the Japanese have been cultivating this taste for a thousand years.’

The cultivar ‘Emerald ’n’ Gold’ was introduced in 1967 by the Corliss Brothers of Ipswich, Massachusetts. Like fellow ’67 babies, the Twix bar and Angel Delight, it remains defiant in the face of fashion. Certainly, if all the plants of the English garden were lined up from the most cheerful to the most tasteful, with striped bedding petunias at one extreme and Vita Sackville-West’s pure white ‘Adélaïde d’Orléans’ rose at the other, ‘Emerald ’n’ Gold’ would be down with the rainbow fish mint. But I cherish it because it speaks of hope. It is an olive- bearing dove in the great flood of winter. Sometimes in early February I spot a lurid specimen in freshly dug soil and feel a rush of love for a householder I have never met, someone who endured colourless months of wet and cold and finally broke down, thinking, ‘I don’t bloody well care what I buy, just make itbright!’

It is these human stories that keep me enraptured by front gardens and make me choose Dudrich Mews over the Hampshire Hangers or other rural location. Nature writers are often cautioned not to anthropomorphize nature. ‘Can gorse really feel malice?’ ask their readers. ‘Does the pine actually revel in its height over the heather?’ But writing about domestic gardens begs for speculation on human emotion. Within those small squares are stories of ambition, envy, hope and failure. There is no box hedge beautiful enough to feel love, but there are plenty of people who love box hedging, love it enough to indulge in all the quixotic, self-wounding, doomed-lover pursuits that come with growing Buxus in the Southeast of England.

For all these reasons and more I have long believed that it would be possible to tell the story of my profession, my city and my passions from the pavement of one residential street. That is my intention in this book. Over the length of a suburban road and the course of a single year, I will set out everything I have learned in fifteen years of obsessing over gardens. History will unfold, not chronologically but in relation to this specific windowbox or that particular bay tree. The people I have met, in person or on pages, will live again in stems and twigs; the ghosts of plants I have loved, killed and longed for will loom over every fence and wall. All I need is a buddleja, so I can recount my lowest moments; a Magnolia grandiflora, to enable a few grandiloquent paragraphs; and a proper tree, for scale.

The road I have chosen is ten minutes’ walk from my house.

It is Grove Park, and it needs no more introduction. Soon we will find out everything that is worth knowing about its plants and its people.

Ben Dark will be in conversation with Alice Vincent on Friday 8 April: book tickets

Order a copy of The Grove: Ben Dark | Linktree