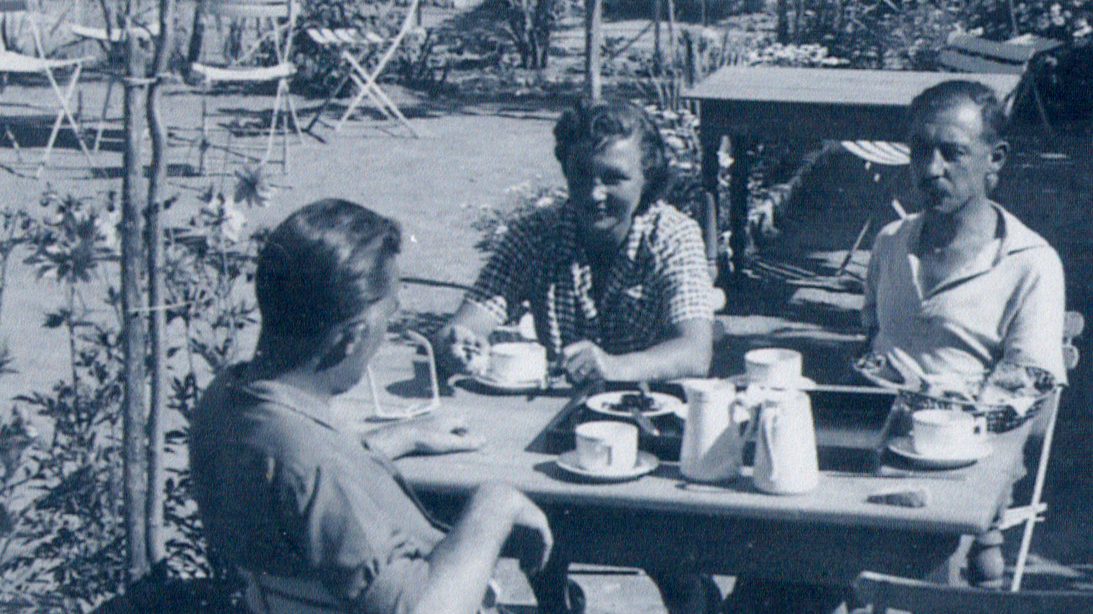 Beth Chatto on her travels

In 2010, after the death of flower arranger and lecturer Julia Clements, a friend sent Beth Chatto a copy of a letter Clements had written in the mid 1980s from Russia. She had travelled there to give a talk, ‘the most harrowing experience I’ve ever had & yet the most successful’. Beth enjoyed reading the letter and recalled talking to Clements about her trip, she was a little regretful that she hadn’t travelled so widely. Like many successful small-business owners she had poured all her time and energy into her garden and nursery and felt at her age the time was past for travelling.

Even if they didn’t visit them, both Beth and her husband Andrew had a strong interest in other countries and their plant life. Andrew in particular spent much of his life researching global plant habitats. His research was detailed enough that when a Chinese gardener wrote for advice on growing perennials, the Chattos were able to pin down the probable habitats and suggest likely species to grow, working from not much more than his return address.

In many ways the world came to the Beth Chatto Gardens instead: Beth corresponded with gardeners and plant enthusiasts from all over the world, as well as playing host to visitors, journalists, and the occasional camera crew. She also had a succession of international students from countries including Japan, Australia, Germany, and the USA, who took their turns as residents of an old static caravan parked in the vegetable garden.

That isn’t to say that she never went abroad. In the 1950s the Chattos spent their holidays searching for plants in their natural habitats. Their travelling companions were David and Nigel Scott, brothers who were long-time friends of Andrew. On later trips they were joined by the painter and plantsman Cedric Morris, Nigel’s lover who introduced him to the Chattos. Their shared interest in hardy plants took them to the Swiss Alps, Corsica and Morocco among other places. There are only a few traces of these trips in the Archive: copies of old photographs and letters, the occasional postcard or hotel receipt; but thanks to these and to Beth’s helpful notes it’s possible to get a picture of the sort of travel they preferred. They went where the interesting plants were, even if accommodation was quite basic. Beth remembered, with seeming fondness, staying in a shepherds’ hut high in the Alps on one of these early trips. On a similar occasion she made notes on the back of a hotel receipt about a tour she and Andrew took with a local guide: ‘…up at 3am to cross a glacier before the snow bridges had melted. To see the sun rise, all the ice and snow tinted rose pink against a violet sky was magical.’

Often the letters that survive are written by other people. On a trip to Morocco, Nigel Scott writes about their excitement at exploring the country and gives a brief sketch of the things they have seen, such as the flower markets in Tangiers. As many tourists do, they went looking for experiences off the beaten path; hiring a guide one evening who was instructed ‘to take us to Arab cafes, not those patroned by tourists’. Their guide obliged and they were taken to one which was deemed acceptably authentic but not ‘too much’. There they ‘drank mint tea, & Cedric & I puffed on a “marajuana” pipe (a [indica] leaf – keif as they call it here), Beth … wouldn’t!!! Made us feel dizzy too!’

The plant hunting holidays seem to have come to an end as they all got older, and Beth became busy with establishing her garden. Any family holidays the Chattos took do not feature in the archive collection, instead the emphasis is on her solo travels. These were most often a combination of work and pleasure, with visits to other gardens and nurseries and speaking engagements. They include several short trips, such as when Beth was whisked off to France by Baron Philippe de Rothschild for a weekend to consult on his chateau gardens. The longest trips she took were her lecture tours in the 1980s, mostly to North America but later to New Zealand and Australia. These trips were still quite short as she couldn’t be away from the garden for more than a couple of weeks but were extremely busy.

Many of these trips, large and small, are recorded in her notebooks, both the ones she carried with her for quick observations and her travel diaries, written up when she had the time. These give a good overview, but there are also other glimpses to be had in her scrap books and memorabilia files, ephemeral documents with her notes to give context. 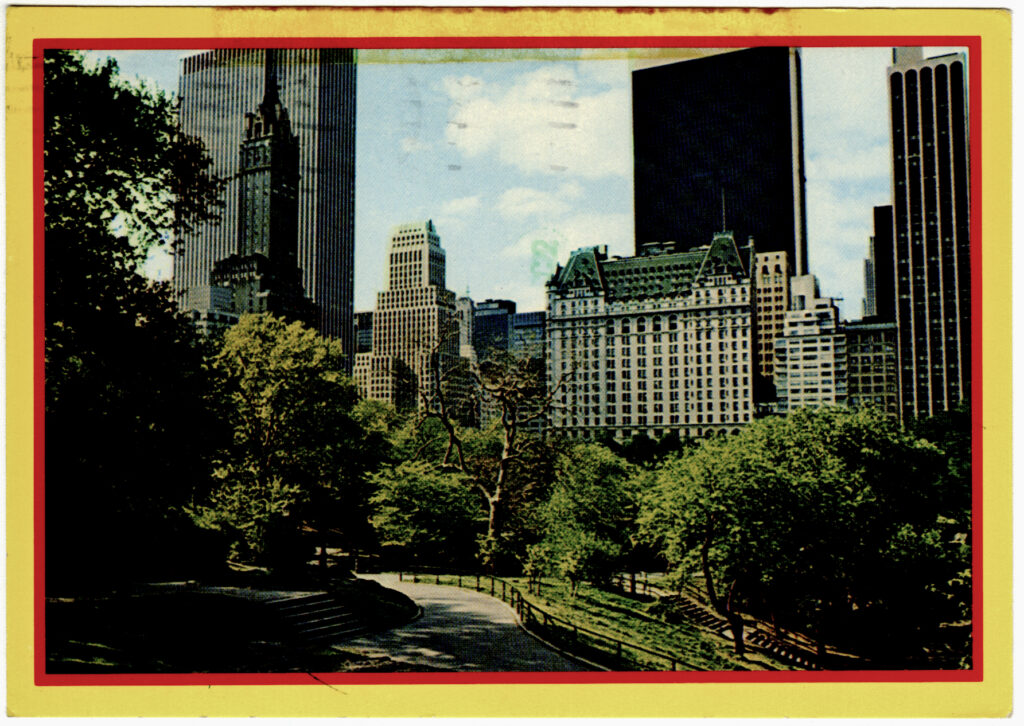 On her first trip to the USA in 1983 she wrote regular postcards back to Andrew, giving her impressions of the places she visited and the people she met, often ‘quite plant mad’. They give some idea of her hectic schedule: a postcard sent from Philadelphia lists an interview and photograph session on the way from the airport, a possible broadcast that evening, then an all-day canoe trip followed the next day by two media appearances which she also noted in her scrapbook. The first was a two-minute slot at lunchtime, which Beth didn’t think much of ‘My books were brought into it, but I can’t imagine anyone had time to listen at that hour.’ The afternoon interview went better: ‘I was at the Botanic Gardens, Chapel Hill, nr Raleigh + did a twenty-minute televised talk with a young man called Toby. I enjoyed that. Hope it is eventually broadcast and looks ok.’

Other little items give an idea of how she found the country: some things familiar, other things strange, such as on this card where she explains the origin of the expression ‘break a leg’, which she was obviously initially surprised by.

Shorter trips also provided similarly new experiences. In 1987 she was asked to give a talk in the Netherlands, which she describes as her ‘first professional engagement on the Continent’, she made a trip of it, travelling there with her German student Mechtild, then staying with Helen and Suzie (Countess von Stein-Zeppelin and her companion Suzanne Weber) before spending a few days staying with Romke van de Kaa, who had organised the talk. Van de Kaa had first met Beth when he was working for Christopher Lloyd at Great Dixter and in the 1980s was running a nursery business with Piet Oudolf. He took her on trips to visit other nurseries, including that of fellow perennial grower and garden designer Ernst Pagels in Germany. On the way back they were arrested at the border: Beth had forgotten her passport and they had none of the required papers for transporting plants. The retelling of this incident in her biography gives an idea of the seriousness of the situation, but in her later notes her main concern was getting back in time for a talk she had agreed to give that evening.

Forgotten passports aside, it’s clear from her papers that Beth was an enthusiastic traveller, willing to try most things and forgo comfort for the sake of new experiences. Obviously, her garden and nursery business would always be her priority, and this limited her opportunities, although she had offers of speaking engagements from all over the world. If she’d had more time who knows where in the world she might have gone, but wherever that was I’m sure she would have probably coped with it very well.